Phytosomes are an innovative lipid-based delivery system that have a liposomes-related structure and can be used for the entrapment of different types of polyphenolic-based phytoconstituents to improve their absorption when administrated. The first phytosomes were developed by Indena company (Milan, Italy) in the late 1980s, which aimed to increase the bioavailability of drugs by complexing them to phospholipids. The structure of phytosomes is composed of standardized polyphenolic plant extract incorporated into phospholipids, mainly phosphatidylcholine (PC).

Phytochemicals are bioactive polyphenolic compounds naturally found in plants that have been studied extensively due to their potential medicinal and nutritional benefits to humans. They not only play a protective role for the plant but are responsible for its color, aroma, and flavor. These compounds have attracted the attention of scientists worldwide, owing to their potent bioactivity against different diseases, their low cytotoxicity and their ability to be utilized in the production of cosmetics and dietary supplements [1][2][3].

Nowadays, the skin is more likely to become infected as a result of changing environmental conditions and an increase in pollution levels. Consequently, there has been a significant increase in the demand for herbal medicine in both developed and developing countries owing to their potent biological efficacy, higher safety margins, and lower cost than synthetic agents [4]. Numerous herbal extracts originating from different plant species have been evaluated for their potential to treat skin conditions due to their medicinal benefits, which include antimicrobial and anti-inflammatory properties, their ability to promote blood clotting and wound healing, and to relieve burns and other skin diseases [5][6]. Several common skin conditions, including eczema, acne, urticaria, pruritus, psoriasis, and other bacterial and fungal skin diseases, can be treated efficiently using medicinal herbs [7][8]. The chemical structure of most plant extracts used in pharmaceutical and cosmeceutical applications is based on flavonoids or other polyphenol rings, which have high molecular weight and, hence, have poor solubility and are poorly absorbed through the skin [9][10].

The human skin is a remarkably complex and sophisticated organ that serves as a barrier to external exposure by enveloping the inner body components. It consists of three main layers—the epidermis, dermis and hypodermis—and each has different degrees of specialization. Along with its function as a waterproof barrier, the epidermis contains melanocytes, which determine the skin’s tone and pigmentation. The dermis is the skin layer underneath the epidermis that composed of connective tissue, sweat glands and hair follicles and helps to maintain the skin’s flexibility. In comparison to the other layers of the skin, the hypodermis is made up of fat and connective tissue and is responsible for shock absorption [11]. The stratum corneum (SC), or outer layer of the epidermis, is entirely made up of dead, keratinized epithelium cells and other metabolically inactive cells that cover the outer surface of the skin [12]. The SC and epidermis are regarded as the most effective barriers against hydrophilic and lipophilic compounds, respectively [13][14]. Furthermore, in terms of skin mechanical properties, elastic fibres are essential for skin elasticity and are directly responsible for skin performance and appearance [15].

There are various types of nanotechnology-based materials that are currently used in the delivery of polyphenolic phytochemicals. Nanosized delivery systems can be classified into two main groups: Organic delivery systems (i.e., liposomes and polymeric nanoparticles) and inorganic delivery systems (i.e., silver, gold, and copper nanoparticles) [16]. Liposomes are one of the most commonly used nanoparticles that have been successfully used in the pharmaceutical and cosmetics fields [17]. The encapsulation of curcumin into liposomal nanoparticles showed potent activity against lung, pancreatic, and colorectal cancer at a lower dose in comparison to free curcumin [18]. Polymeric nanoparticles can also be used as an efficient nanocarrier of phytochemicals, and the encapsulation of curcumin extract into chitosan and polylactic-co-glycolic acid (PLGA) nanoparticles exhibited a significant improvement in its solubility profile compared to a conventional curcumin formulation [19].

2. Advantages of Phytosomes in Topical Applications

In topical applications, phytosomes have several potential advantages over the conventional topical formulations. Phytosomes increase skin absorption and bioavailability, and they induce the delivery of herbal active constituents to tissues [20]. Moreover, phytosomes improve skin functions by enhancing hydration, the enzyme balance, and collagen structure [21]. The high affinity of phytosomes to skin phospholipids intensified its effectiveness compared to conventional free compounds [22]. As mentioned earlier, there are several barriers facing topical applications of phytosomes formulation. For example, one of the most important barriers of the transdermal application of phytochemicals is the SC, which is the thick outer layer of the epidermis [23]. Bioactive molecules can cross the SC via different pathways, which are either intercellular or intracellular. Intercellular penetration can be achieved via sweat glands, sebaceous, or hair follicles, whereas the intercellular lipid matrix and corneocytes are the main pathways of intracellular penetration [24][25]. It has been reported that enhancing the diffusion coefficient of the drug can increase the concentration of biomolecules and enhance partitioning between the these molecules and the SC layer, and that all these factors can improve the permeability of biomolecules to the SC for transdermal application [26]. The transdermal permeability of topical products can be increased when the active ingredients are lipophilic and have a low molecular weight.
Most of the widely studied phytocompounds are polyphenols, which have poor bioavailability and lipid solubility due to their hydrophilic nature, limiting their in vivo activity [27]. The phospholipid moieties of phytosomes have a high affinity to bind several flavonoids compounds tightly [28]. There are several herbal extracts, such as hawthorn, grape seed, green tea, milk thistle and ginseng, that are more effective when they are loaded into phytosomes, even more so than when they are carried in a liposomal formulation [22]. The formulation of polyphenol-based phytochemicals phytosomes nanoparticles enhances the application of standard herbal materials as the phospholipid molecules of phytosomes interact with the active phytoconstituents, increasing their stability [29]. Furthermore, the phytosomes–herbal complex has a higher affinity to the skin phospholipid moiety, which can improve the lipid solubility of the topical formulation [22].
Figure 1 demonstrates some examples of the phytocompounds incorporated into a phytosomal delivery system. 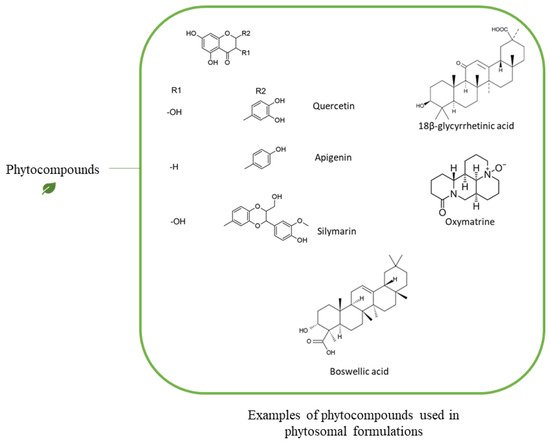