Chemerin belongs to the adipokines—proteins secreted by white adipose tissue. It plays an important role in angiogenesis and metabolism and its levels correlate with inflammation severity in many clinical states.

Inflammatory bowel disease (IBD) is a chronic immune disease, with two main subtypes: Crohn’s disease (CD) and ulcerative colitis (UC). In recent years, the prevalence of inflammatory bowel disease is rising very rapidly [1].
Adipokines are hormones secreted by white adipose tissue (WAT) [2]. One of these is chemerin, which has a pro- and also anti-inflammatory function, which was first identified in 1997 in keratinocyte and fibroblast cultures [3]. It is synthesized as an inactive prochemerin, which is converted into its active form by serine proteases. Chemerin is secreted in large amounts not only in WAT, but also in the skin, colon, and lungs [4][5]. It binds to three types of receptors: ChemR23, GPR-1, and CCRL2 [6].
High serum levels of chemerin have been found in systemic lupus erythematosus [7], diabetes mellitus [8], asthma [9], esophageal, gastric [10], and colorectal cancer [11]; it correlates with the severity of inflammation in many immune-related diseases—for example in systemic sclerosis or psoriasis [12][13]. It stimulates macrophages to produce pro-inflammatory cytokines, such as tumor necrosis factor (TNF) and interleukin (IL) 6. A study has shown an increase in the expression of ChemR23 receptors in endothelial cells caused by pro-inflammatory cytokines, such as IL 1β, IL-6, and TNF [14].
Most reports point to the pro-inflammatory role of chemerin, but some data show its anti-inflammatory effects. Chemerin reduces neutrophil transepithelial migration, and CHEmR23 activation enhances apical neutrophil clearance [15]. It was also observed that its activation by a chemerin isoform (chemerin 15) in peritoneal macrophages inhibited the production of inflammatory mediators in response to IFN-γ and LPS. Therefore, chemerin may also contribute to acute inflammation suppression or termination [16].
Until now, circulating chemerin in IBD patients was only rarely evaluated and showed inconsistent results [17][18][19][20]. It has been noticed that the clinical condition of patients negatively correlates with body mass index (BMI), which may be due to reduced consumption and absorption of nutrients, as well as increased energy expenditure caused by the disease [21].
Activation of ChemR23 causes the migration of dendritic cells (DCs) to inflammation sites and stimulates phagocytosis [22]. An increased number of these cells in biopsy specimens from patients with active IBD has been observed, which may point to a possible local pro-inflammatory role of chemerin [23]. In another study, it has been shown that the expression, secretion, and processing of chemerin in the cecum and colon are positively associated with the severity of inflammation in dextran sodium sulfate (DSS)-induced colitis. [24]. A breakthrough in the treatment of IBD was the introduction of biological agents mainly based on anti-TNF antibodies, such as infliximab (IFX) or adalimumab (ADA), which are highly efficacious in severe cases [25][26]. These drugs are used in a variety of inflammatory conditions, such as various types of arthritis, hidradenitis suppurativa and psoriasis [27][28]. In rheumatoid arthritis patients, a significant decrease in serum chemerin was observed following anti-TNF therapy [29]. Up to now, no similar studies have been performed in IBD. 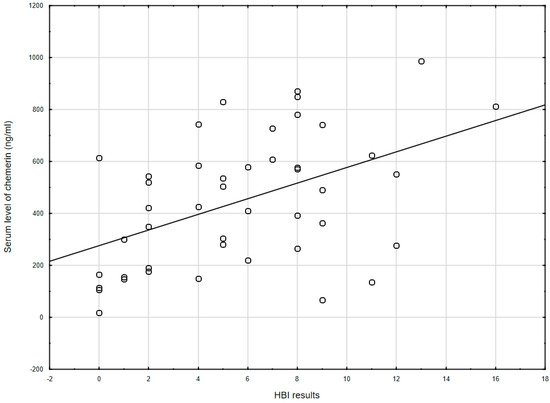 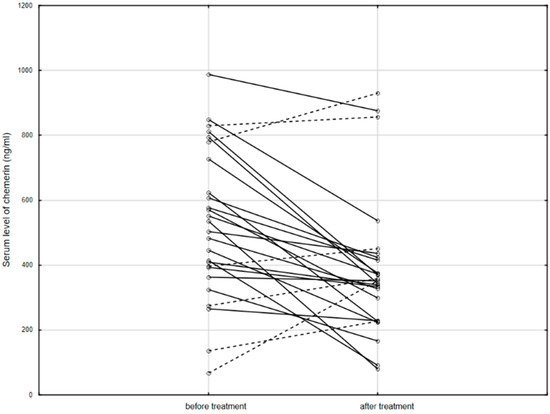 Figure 2. The serum level of chemerin in patients before and after anti-TNF therapy. Solid line: decreased concentration; dashed line: increased concentration.
After anti-TNF therapy, 20 patients achieved clinical remission, while 6 patients still had active disease. There was no difference in the chemerin levels measured before treatment in these patient subgroups (532.2 ± 166.0 mg/mL vs. 512.7 ± 398.4 ng/mL; p = 0.860). However, after treatment, patients in remission had significantly lower levels of chemerin than patients with exacerbation (319.8 ± 118.7 ng/mL vs. 599.7 ± 318.9 ng/mL; p = 0.003). Additionally, the ratio of serum levels of chemerin measured before and after anti-TNF treatment was higher in patients, who reached remission after 14 weeks of therapy compared to the group in which the disease was still active (1.53 IQR: 1.19–2.09, n = 20 vs. 0.80 IQR: 0.60–0.97, n = 6; p < 0.001).
No effect of other accompanying chronic diseases, treatment with immunomodulators, or history of abdominal surgery on chemerin levels was observed. Patients treated with anti-TNF before therapy had similar levels of chemerin compared to the remaining IBD group. However, patients treated with steroids revealed higher concentrations of chemerin compared to patients who did not receive this treatment (p = 0.049, Table 2).
Table 2. Relationship between the selected clinical parameters and the concentration of chemerin in the IBD patients’ blood serum.

In conclusion, chemerin positively correlated with the clinical severity of IBD, and its level decreased after anti-TNF treatment. As shown in the present study, as well as in others, chemerin may be an indicator of clinical activity of IBD—CD in particular—as well as being useful in anti-TNF treatment monitoring. It would be useful to further compare the clinical value of chemerin with other known markers of IBD severity—in particular, with calprotectin. Additionally, future research should focus on the molecular basis of the relationship between chemerin levels and responses to anti-TNF therapy.