According to global statistics published by the World Health Organization, oral cavity cancer is among the most prevalent types of cancer worldwide, with the female to male incidence ratio showing a discrepancy of 2:1 in south-east Asia [1]. Excessive alcohol consumption, betel quid chewing, and cigarette smoking (ABC habits) are risk factors for oral cancer [2]. However, the ABC habits cannot explain the increasing trend of young females diagnosed with oral squamous cell carcinoma (OSCC) without performing the ABC habits[3].
The long non-coding RNA XIST is an X-linked gene that contributes to X-chromosome inactivation. It is also related to tumorigenesis and progression in nasopharyngeal carcinoma , small intestinal adenocarcinoma , and breast cancer [4][5][6]. A previous study revealed that a loss of genomic copy number variants of XIST is shown in the OSCC group[7]. Recently, one research article provided evidence of a relationship between XIST and the inhibition of tumor progression in vitro [8].

2. The Characteristics of Participants

3. Salivary lncRNA XIST Was Expressed Only in Females

A preliminary test to detect XIST expression in buccal cells and saliva, samples of which were kindly provided by four healthy research assistants (two males and two females) was conducted. Of the volunteers, two males and one female did not express XIST in the buccal cells or in the saliva (data shown in Supplementary Figure S1). Salivary lncRNA XIST was only expressed in females, with a high proportion observed in control group females (Table 1, Figure 1). Control group and OSCC males lacked salivary XIST expression with detectable GAPDH amplicons (data shown in Supplementary Figure S2). 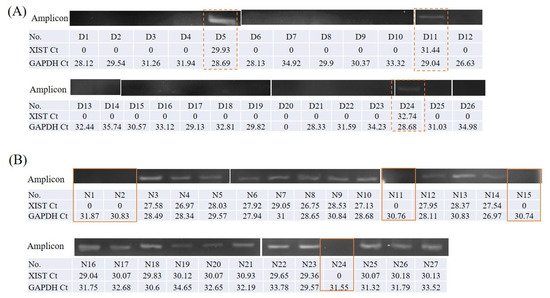 The grouping gels, which were cropped from different part of the same gel, or from different gels, were shown with a space. The original full-length gels were included in the supplementary files during peer review process.

4. Clinical–Pathological Data Difference between Sex among Patients with OSCC

Among the patients with OSCC, 83% (20 of 24) of the smokers, 90.3% (28 of 31) of those who consumed alcohol, and 95% (20 of 21) of those chewed betel nuts were male. Tumors of male patients were low-grade or well differentiated in 66% (22 of 33) of cases, and most were in the buccal site (13 of 33). A higher proportion of tumors in female patients showed moderate or poor differentiation (17 of 26), and most were on the tongue (14 of 26) (Table 2). Most females with OSCC did not have ABC habits. The tumor was typically small and poorly differentiated when located in the tongue. Most males with OSCC had ABC habits, and the tumors were typically located in the buccal site, were larger, and well differentiated.

Table 2. The significant difference of clinical characteristics between sexes among OSCC patients. 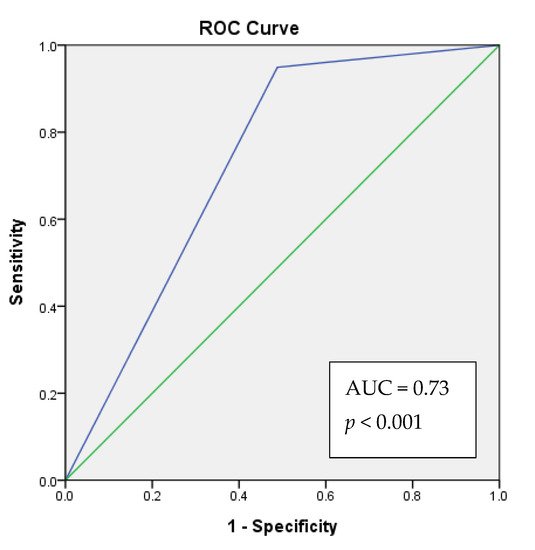