Silver nanoparticles (AgNPs) are among the most commonly used engineered nanomaterials with medicinal, industrial, and agricultural applications. Considering the vast usage of AgNPs, there is a possibility of their release into the environment, and their potential toxicological effects on plants and animals. Apart from using the particulate form of silver, AgNPs may be transformed to silver oxide or silver sulfide via oxidation or sulfidation, respectively, and these ones impact the soil and living organisms in a variety of ways. Therefore, it is critical to address the behavior of nanoparticles in the environment and possible methods for their removal. This review focuses on three objectives to discuss this issue including: the possible pathways for the release of AgNPs into the environment; the toxicological effects of AgNPs on plants and microorganisms; and the recommended phytoremediation approaches.

The application of silver particles has a centuries-old history due to their therapeutic nature in medicine and storage vessel for beverages [1]. AgNPs are among the most commonly used nanoparticles, broadly due to their numerous uses. In 2015, the AgNPs market was reported to be $1 billion, which is expected to rise to $3 billion by 2024 [2][3]. Due to the antibacterial, antifungal, antiseptic, and antiviral properties, AgNPs are of prime importance in medical applications and were broadly used as an antimicrobial agent before the discovery of antibiotics [1][4][5]. Up until now, AgNPs have been utilized in a diverse range of applications in many fields, with some examples of health (immunity-based food supplements, pharmaceuticals, disinfectants, burn treatment products, and wound healing/dressings, radiotherapy), other biomedical products, optics, biosensing, environmental remediation, food industries, cleaning, water and air disinfection, electronics, textile, packaging, skincare products, detergents, plastics, paints, and even children toys [3][6][7][8][9]. AgNPs have also been used in agriculture as plant growth promoter/fertilizer, fruits ripening and preservation agent, plant disease control fungicide, and insecticide [7][10]. AgNPs also have several distinctive physicochemical properties, such as high thermal and electrical conductivity, improved surface Raman scattering, catalytic activity, and non-linear optical behavior [11]. This widespread use of AgNPs ensures particle release into the environment and makes it one of the most exploited nanomaterials [12][13] resulting in unknown impacts on plants, microorganisms, animals, and humans in the exposed environment.
AgNPs have the average production of 500 tons per year [14] and are known for their widespread application which has made their entry into many commercial products [15][16][17]. They have diverse applications and are becoming more common in industrial processes [18]. The high usage of AgNPs can result in the direct or indirect release of these nanomaterials into the environment and can potentially cause toxicity for various organisms including aquatic organisms, plants, and humans. The direct transformation includes aerial deposition, run-off, or sewage discharges (release from industrial and household products into water bodies). The indirect release includes discharges from organic or inorganic fertilizers and engineered plant growth substances used as fertilizer substitutes that can be accumulated in soil and underground water, accidental spills during manufacturing and transport, and biosphere pollutions through atmospheric emissions from smelting, coal combustion, and cloud seeding [19][20][21][22][23]. AgNPs can be oxidized in the environment and be transformed into the ionic form of the silver (Ag+) which can be more toxic than the particulate form of silver [24]. AgNPs and Ag+ can make their way into the water bodies and soils during or after the lifetime of the product and eventually affect the ecosystem [12][25][26].
Prior to evaluating plant’s potential to remove nanomaterials from the environment, it is critical to understand the environmental toxicology effects of these materials and their effects on plants and microorganisms.

2. Environmental and Toxicological Effects of AgNPs

The heavy inclusion of AgNPs in today’s world has not been assessed and correlated with environmental risks [27][28] and balance between nanoparticles and biodiversity. Recently, the application of nanomaterials has gained more popularity in different areas [29][30] which raises the risk of their release into the environment and potential toxicological effects. AgNPs are considered as enormously toxic on the basis of L(E) C50 values (the amount which causes 50% death of tested animals when the material was given at once) for environmentally related organisms at the levels of L(E) C50 b 0.1 mg L−1 [14], while on the other hand, the predicted environmental concentration (PECs) of AgNPs in the environment ranges between 0.03 to 0.08 mg L−1 [31]. As per the World Health Organization (WHO) and Environmental Protection Agency (EPA), the maximum contamination limit (MCL) of toxic range of silver is 0.1 mg L−1 [32][33][34][35][36], although naturally occurring silver concentrations are generally low in the environment (surface waters) but are continuously increasing at higher levels due to runoff and wastewater from urban and industrial areas [32]. AgNPs released into the environment can be oxidized and generate the ionic form of silver that is more reactive than the particulate form. The high concentration of AgNPs and their potential to be oxidized in the environment can cause toxicity for living organisms. Consequently, this dilemma, if not addressed on time, will more negatively affect the ecosystem also by inhibiting growth of plants, polluting drinking water, and causing harm to human health. This will ultimately curtail the fauna and flora. Therefore, sustainable methods for the remediation of contaminated soil with AgNPs must be investigated.
Since the 1980s, the U.S. Environmental Protection Agency (EPA) regulated AgNPs usage and release into the environment to limit their impacts on the ecosystem [37]. To curb their impacts on living organisms, the concentration of total silver in aquatic systems is limited to 1.2–13 ppb (depending on CaCO3 concentration) [37]. Over the last decade, the vast application of AgNPs called for examination of these particles to determine their long-lasting effects on ecosystems. The occurrence of silver species in the environment, particularly the water supply, can result in bioaccumulation across several trophic levels with potentially severe toxic effects [38]. Due to the increasing consumption of these materials, the aquatic environments are prone to silver contamination. The released AgNPs into the environment can be transformed into more toxic forms such as chloride, nitrate, etc. [39]. Among these silver species, silver nitrate is the most toxic due to dissociation into Ag+ and nitrate interaction with other elements. Therefore, it is crucial to increase our understanding about the toxicity effects of AgNPs [38].
Silver is considered as the second most toxic metal to aquatic organisms after mercury [40]. The toxicity mechanisms of AgNPs and Ag+ are different but both are fatal to a variety of organisms including bacteria, animals, and plants [19][41]. The cellular structure and organelles of these organisms are affected by silver species through unfavorable binding interactions [42]. Silver cations can potentially enter cells through metal transporters such as copper ion transporters or transmembrane potassium channels [6]. Moreover, silver species translocation is attributed to variations in toxicity among Ag+, AgNPs, and insoluble silver salts [19][43]. The potential pathway for AgNPs released into the environment and its remediation is illustrated in Figure 1. 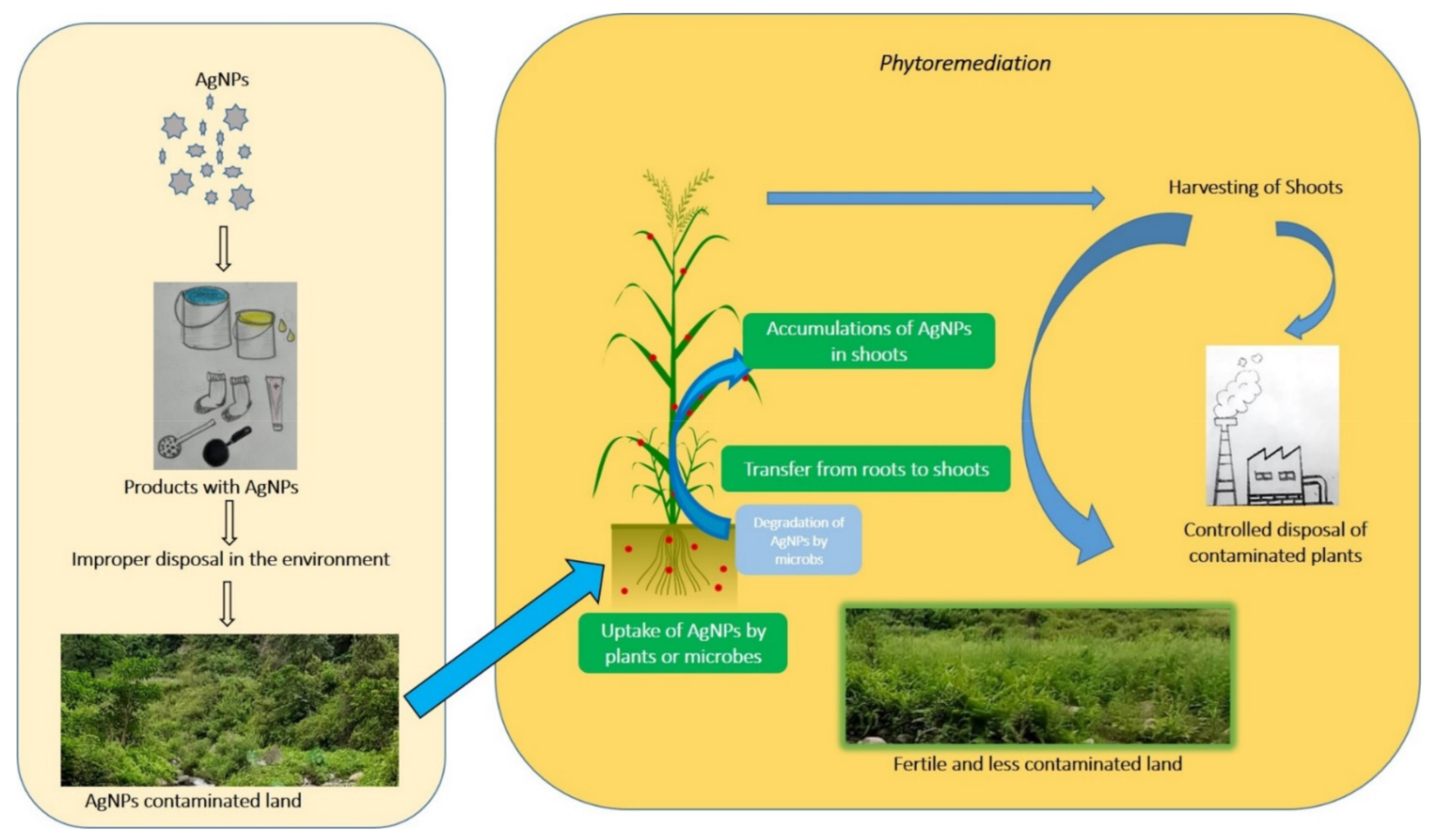 Figure 1. Potential pathway for AgNPs leakage into the environment and its remediation.

We provide invaluable information about the consequences of the release of nanomaterials in the environment. Nanomaterials, especially AgNPs affect soil properties, microorganisms, and plants and can therefore cause toxicity for living organisms including humans. Although phytoextraction is suggested as a promising approach in removing metal-based nanomaterials, several factors such as the size, concentration, and type of AgNPs as well as soil structure, soil microbial community, and plant species should be considered to select the appropriate method of phytoremediation. In addition, molecular and physiological analysis that improves understanding about the involved transporters and metabolites in removing AgNPs from the environment will help scientists to improve the success of phytoremediation of these materials by altering the expression of related genes using plant biotechnology methods.
Despite the growth in biotechnology, phytotechnology, and nanotechnology, there is still very scarce information regarding sustainable removal of toxic nanoparticles from the environment. Further research is recommended to better understand the mechanism of AgNPs uptake by plants. The scientists must evaluate a small modeling kind of approach to see the effects on ecosystem and also ‘lab to land’ approach where there will be evaluation of small-scale toxicological data and its removal must be correlated at field level. Another area must be related to seeing the molecular changes upon nanoparticle exposure. Few of these efforts will be helpful in impact assessment of nanoparticles on biological organisms.