Cardiovascular diseases (CVDs), the most common cause of mortality in rich countries, include a wide variety of pathologies of the heart muscle and vascular system that compromise the proper functioning of the heart. Most of the risk factors for cardiovascular diseases are well-known: lipid disorders, high serum LDL cholesterol, hypertension, smoking, obesity, diabetes, male sex and physical inactivity.

Cardiovascular diseases (CVDs) are the leading cause of death worldwide and include a wide range of disorders, such as diseases of the heart muscle and vascular system [1].
Usually, CVDs are considered diseases of the Western countries, but recent evidence showed that the populations of emerging and even low-income countries also suffer from them. Despite advancements in primary and secondary CVD prevention, there are still significant disparities in cardiovascular healthcare across location and time.
Efforts to reduce this health disparity have been confirmed by a recent interest in developing new approaches to study the causes of risk factors, which include the social determinants of health [2]. Epidemiological research has mostly concentrated on identifying, altering and treating all the specific conditions statistically associated with the onset of cardiovascular disease; nevertheless, multiple cardiovascular risk factors are increasing at varying rates around the world [3].
The World Health Organization (WHO) reported in 2015 that cardiovascular diseases caused more than 17.7 million deaths worldwide, accounting for 31% of all global mortality [4][5][6].
Over recent years, it has been amply demonstrated that an incorrect diet, with a lack of fruit and vegetables but rich in red meats, and so in cholesterol, is one of the causes of intestinal disorders and infection which cause microorganism alterations and metabolic disorders, promoting the development of CVDs [7][8].
In fact, dietary carnitine (present predominantly in red meat) and lecithin have been shown to be metabolized by the gut microbiota (GM) to trimethylamine (TMA), which is metabolized by liver flavin monoxygenases to form trimethylamine-N-oxide (TMAO), an important gut microbe-dependent metabolite generated from dietary choline, betaine and L-carnitine [9][10].

2. The Most Representative Cardiovascular Diseases

As previously reported, cardiovascular diseases are the major cause of morbidity and mortality in developed countries, being the leading cause of death worldwide [11].
Commonly, the most frequent pathology—also defined as underlying disease—has been identified as atheromatous vascular disease. In fact, it results in coronary artery disease (CAD), peripheral vascular disease, cerebrovascular disease and the subsequent development of arrhythmias and heart failure [12].
The major risk factors are well known and can be summarized as hypertension, diabetes, high cholesterol levels, obesity and smoking [13][14]. Furthermore, there is substantial evidence that low cardiorespiratory fitness can be considered a predictor of cardiovascular and metabolic diseases [15].
Atherosclerosis, which is a chronic inflammatory condition, is the dominant cause of CVD, including a large range of diseases, such as stroke, myocardial infarction (MI) and heart failure.
Atherosclerosis mainly occurs in the intima of the vessels, influencing the normal blood flow and activating the endothelium with expression of adhesion molecules; the main direct CVD cause seems to be rupture of atherosclerotic plaques [16].
The deposition of microscopic cholesterol crystals in the intima and its underlying smooth muscle is the first step in the formation of these plaques. The plaques then expand inside the arteries due to the growth of fibrous tissues and surrounding smooth muscle, causing blood flow to be reduced. Sclerosis is caused by fibroblasts producing connective tissue and calcium deposits in the lesion [2][17][18].
Another important and frequent heart valve disorder is calcific aortic valve disease (CAVD), a dynamic process characterized by several steps, from valve mineralization to narrowing, with a consequent impairment of blood flow and calcium deposition [19]. Due to time-dependent wear and tear of the valve leaflets, as well as passive calcium deposition, this process was formerly regarded to be “degenerative”. Subsequent studies have instead shown that the presence of osteoblasts in vascular lesions suggests that valve calcification is a dynamic process that involves lipoprotein deposition and the presence of persistent inflammation [20]. CAVD and atherosclerosis share the same triggering event, for example, an increase in mechanical stress, altered shear stress and endothelial damage, which allows lipid infiltration and recruitment of inflammatory cells. These cells interact in processes that release reactive oxygen species (ROS), causing LDL oxidation [21].
The important differences between the two pathologies appear in the advanced disease stages, where smooth muscle cells are the active protagonists of chronic inflammation within the atherosclerotic plaque, and fibroblasts are the main cells involved in the valve mineralization process [19].
The hallmark of the early stages of CAVD is inflammation, characterized by the activation of valve endothelium, the expression of cell adhesion molecules (VCAM-1, ICAM-1) and, finally, the recruitment of immune cells [22][23].
The onset of the disease involves several events, such as the activation of valve interstitial cells (VICs) and sclerosis of the valve leaflets. The first CAVD stage is called aortic valve sclerosis, characterized by microcalcifications and valve thickening [24]. The final stage of disease is characterized by calcific aortic stenosis with calcified noduli on the valve leaflet surface, which hinder its mobility [25].
Moreover, the leaflets appear to be infiltrated by immune cells, with a large deposition of lipids, proteoglycans and cell debris [26]. The final result is an increased stiffness and the obstruction of the blood flow.
Another critical cardiovascular disease is endocarditis, an inflammatory condition of the endocardium that usually affects the heart valves. In the past several decades, the intervention of valve replacement and the use of cardiac devices such as permanent pacemakers have significantly contributed to the increase of infective endocarditis (IE) episodes [27].
IE is a life-threatening disease that has long-lasting effects in patients and most often occurs in left heart valves, in particular mitral or aortic valves [28].
IE disease is closely related to the virulence of the causative microorganism and the patient’s health status for triggering a good immune response. There are two main phenotypes of IE disease: (i) acute IE is a serious condition that develops over a period of days or weeks; and (ii) subacute IE follows a slower course, characterized by very slow progress over weeks or months [29][30]. Notably, valve disease (especially mitral valve disease) is considered a relevant predisposing factor of IE; nonetheless, nowadays the prevalence of IE is low, due to a decline in the prevalence of rheumatic heart disease [31].
Despite the new advances in prophylaxis, IE is one of the substantial causes of mortality in children and adolescents [32].
The only preventable cardiovascular disease so far is rheumatic heart disease (RHD), a chronic heart valve condition caused by an infection with the bacterium group A Streptococcus which can lead to acute rheumatic fever (ARF), a complication that leads to an autoimmune response. If Streptococcus A and ARF are left untreated, repeat infections are more likely to happen, which can cause permanent damage to heart valves. Long-term RHD consequences can include MI, stroke, atrial fibrillation (AT), endocarditis and aortic stenosis, which is the predominant valve lesion in RHD [33][34].
Although the global incidence of ARF and RHD has decreased, it remains endemic in low-income countries with gaps in healthcare and low availability of antibiotics; there these diseases are estimated to affect 20 million people and remain leading causes of cardiovascular death during the first five decades of life [34][35].

Pharmacomicrobiomics is a new branch that proposes to describe the influence of the microbiome on xenobiotic action, appropriately studying the interactions between the host, gut microbiota and drug action, as shown in Figure 1. 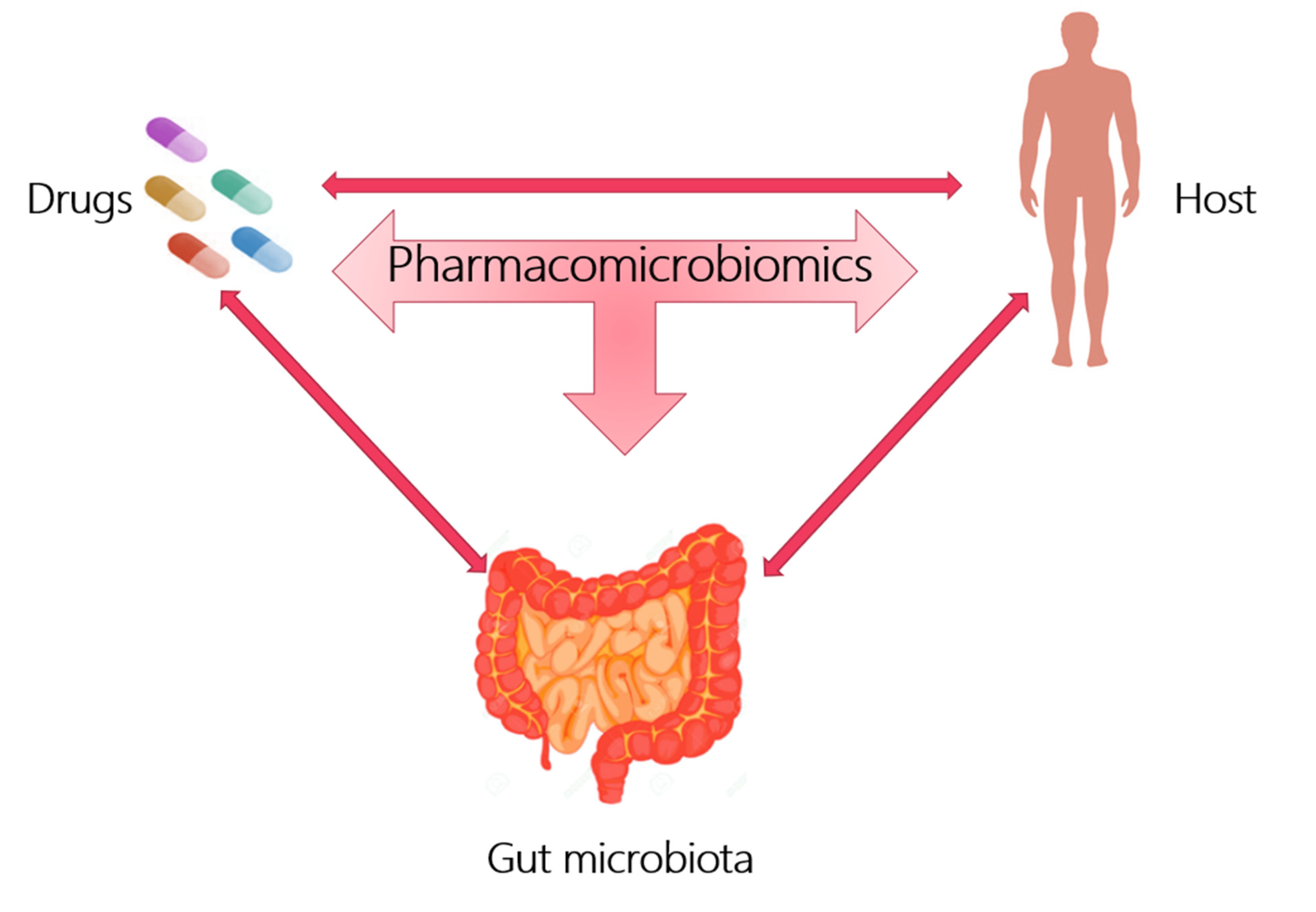 Figure 1. Pharmacomicrobiomics studies the interaction between drugs, host and gut microbiota.
In the last few years, the intestinal microbiome has been considered as a “second genome” that plays an important role in both healthy status and drug response, and antibiotic administration, fecal microbial transplantation and probiotic treatment have been identified as good strategies for the shaping of the microbiota [36].
The advancement in microbial genomics from culture-based to culture-independent methodologies, such as metagenomics or shotgun sequencing of microbial and viral communities, has led to the identification of the gut microbiome’s genetic role linked to disease development or altered therapeutic response [37].
Pharmacomicrobiomic studies have shown that gut microorganisms and their enzyme products can affect the bioavailability, clinical efficacy and toxicity of a variety of drugs by direct and indirect mechanisms.
The advent of this new discipline promises to simplify the microbiome-based, personalized medicine approaches in several diseases [38][39]. Nowadays, it can be defined as a proactive, well-coordinated and well-proven structural strategy for effective healthcare which works best with a network of electronic health records that combine clinical and molecular data to make the best treatment options possible, allowing for the development of focused care for patients who do not respond to medications as expected. [40].
The first recognized role of the microbiota as a modulator of drug activity was in the 1930s with prontosil, an antibacterial chemotherapy molecule developed by a German research group as a precursor to the microbial-derived antibiotic sulfanilamide. In particular, it emerged that prontosil itself was not endowed with antibacterial activity but, once taken by a mouse, underwent a metabolic degradation which led to the synthesis of an antibiotic molecule, sulfonylamide [36][41].
Subsequently, sulfasalazine, a drug used for the treatment of ulcerative colitis, Crohn’s disease and rheumatoid arthritis, confirmed the important role of the microbiome in drug activity. This anti-inflammatory molecule undergoes a reductive metabolism by intestinal bacteria to be converted into sulfapyridine and 5-aminosalicylic acid, a non-steroidal anti-inflammatory drug available for systemic absorption [42].
Considering the high variability in drug response and the microbiota’s complexity, it would be necessary to develop a systematic method to obtain the most effective therapeutic results in the host.
A good personalized medicine approach was tested by an Israeli study group that monitored week-long glucose levels in 800 healthy and pre-diabetic people, measuring responses to 46,898 meals. Variables such as microbiota composition, blood tests, food diary, genotyping and anthropometrics were recorded using machine learning algorithms. The obtained results were very interesting, since they found a high variability in the responses to identical meals between the participants, with significant blood glucose variability and consistent taxa changes in most participants, suggesting a role for the microbiome in postprandial variability [43].
Assuming that the gut microbiome played a central role in the pathogenesis and progression of inflammatory bowel disease (IBD), a recent prospective study demonstrated that the evaluation of the gut microbiome can also predict responses to IBD therapy. In detail, a cohort of patients with IBD was enrolled for gut-selective anti-integrin therapy with vedolizumab.
Vedolizumab is a recombinant humanized immunoglobulin G1 (IgG1) directed against the human LPAM (lymphocyte Peyer’s patch adhesion molecule 1) with immunomodulating, anti-inflammatory and potential antineoplastic activities. Disease course and stool metagenomes were assessed at baseline and after treatment, starting at 14, 30 and 54 weeks.
Using a network algorithm that incorporated both microbiome and clinical data of patients, they highlighted the associations between the basic taxonomic GM composition and functional abundance as well as clinical remission at 14 weeks, demonstrating the usefulness of the model predictors in clinical remission and hypothesizing that monitoring early changes in the microbiota may be a valid marker in IBD treatment [44].