Glioblastoma multiforme is one of the most deadly neurooncological diseases due to its prominent drug resistance and pronounced potential to reccurence. Both surgical interventions and tumor invasion within brain tissue causes local mechanical disruption of healthy tissues and may be related to enhancement of epidermal growth factor (EGF) secretion by numerous non-neuronal cells (e.g glioma associated microglia and macrophages; GAMs). Thus, in our research we examined the effect of EGF on human glioblastoma T98G cells, especially in the field of the ROS-dependent mechanisms which regulate cytoskeleton architecture rearrangements and their implications for invasive potential enhancement. IMC and DIC contrast microscopy coupled with time-lapse module were applied for visualization of cellular morphology changes and motile activity modulation. Transwell® assay was applied for estimation of cellular transmigration potential. Cell cycle activity was examined with ImageStreamX image flow cytometry (PI/RNAse staining). Moreover, detailed immunocytochemical analysis of cytoskeleton architecture changes (F-actin and vinculin distribution) and determination of ROS production (CellROX probe) were performed with epi-fluorescence and TIRF microscopy coupled with 2D deconvolution. Additional measurements of chosen proteins levels were confirmed with Western blot technique. Finally, estimation of the changes in cellular bioenergetic  status (ATP and lactate levels) which is crucial for effective invasion, was conducted with bioluminescence and spectrophotometric methods. Exposition of GBM cells to EGF resulted in considerable enhancement of cells proliferation accompanied by cell cycle acceleration. Such effect was followed by remarkable augmentation of cellular motility and transmigration potential correlated with noticeable F-actin filaments rearrangements with simultaneous re-distribution of vinculin towards leading edges. Moreover, increase in cellular ROS production and changes in ATP/lactate production were noticeable, pointing the undoubted role of cellular bioenergetic homeostasis modulation in response to EGF. It is worth emphasizing, that erlotinib (EGFR inhibitor) admittedly inhibited cellular invasive potential and cytoskeleton rearrangements during incubation both with or without EGF. Additionally, in our hands, application of antioxidant N-acetyl-L-cysteine prominently endured the EGF-induced up-regulation of cellular motility. Our research indicates strong pro-mitotic and pro-migratory effect of EGF on human GBM cells. Such effect is accompanied by considerable cytoskeleton rearrangements induction and bioenergetic homeostasis modulation. Collectively, we suppose that collaborative EGFR/ROS signaling is one of the key players within EGF-induced invasiveness of GBM cells.

EGF has long been shown to affect the development of GBM [1]. Indeed, microscopic analyses revealed noticeable phenotypic shifts towards a spindle-like (mesenchymal) morphology in the T98G cell populations exposed to the EGF (1 and 10 ng/mL). Interestingly, EGFR inhibition by Erlotinib (Erl) entirely promoted the epithelial phenotype in both the EGF-treated and non-treated cell populations. These effects were accompanied by a pronounced dose-dependent pro-proliferative activity of the EGF (Figure 1A,B). Furthermore, microscopic and spectrophotometric experiments revealed intensified MTT substrate processing in the cells exposed to 48 h EGF treatment. This was manifested by a considerable accumulation of formazan crystals within the intracellular space (Figure 1C,D). Concomitantly, the effects of EGF on the cell morphology, proliferation, and metabolism were inhibited by erlotinib administration (Erl, a chemical inhibitor of the EGF receptor (EGFR); Figure 1A–D). Notably, no cytotoxic/pro-apoptotic effects of EGF/Erl were observed, as demonstrated by ca. 100% cell viability in all experimental variants (Figure 1E). This notion was confirmed by the DNA content analyses, which showed a strong pro-mitotic activity of the EGF, illustrated by a prominent increase of S and G2/M fractions after 24 h EGF treatment (Figure 1F). Again, the inhibition of EGFR signaling by Erl resulted in G1 arrest of GBM cells. These data show that EGF induced proliferation and an invasive morphology of GBM cells in an EGFR-dependent manner.

GBM cells efficiently invade the adjacent brain regions. To estimate the effect of EGF on the invasiveness of T98G cells, we performed time-lapse video microscopy analyses of their motility in the presence of EGF. Our data indicated a prominent pro-migratory activity of EGF at both applied concentrations (Figure 2A). This was illustrated by the increased (>200%) cell motility (cell speed and displacement) in the populations of EGF-stimulated cells in comparison to controls (Figure 2B). Again, Erl completely abolished this effect, decreasing the motility of T98G cells cultivated in the absence of EGF. 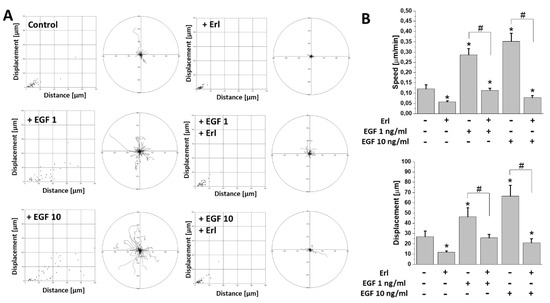 Furthermore, we examined the effect of the EGFR-dependent signaling on cellular metabolic homeostasis, and in particular on the mitochondrial ROS, ATP, and lactate production in the EGF-treated T98G cells (Figure 3). EGF-exposed cells showed a pronounced ROS upregulation (Figure 3A,B). This phenomenon was accompanied by a prominent modulation of lactate/ATP production. Specifically, the increase of lactate secretion (Figure 3C) was accompanied by a slight reduction of ATP levels within the motile EGF-treated cells (Figure 3D). This effect (as well as ROS production) was abolished by the application of Erl. EGFR inhibition also considerably perturbed the production of ATP/lactate in T98G cells, regardless of culture conditions. Thus, links exist between the EGF-dependent augmentation of invasiveness, metabolic reprogramming, and ROS production in T98G cells.

To further examine the mechanisms underlying the pro-invasive effects of the EGF, we performed detailed microscopic analyses of the actin cytoskeleton architecture in the EGF-treated cells. TIRF (Total Internal Reflection Fluorescence) microscopy revealed a substantial remodeling of F-actin filament architecture and focal adhesions within the T98G cells in response to the EGF (10 ng/mL) treatment. In particular, spindle-like (mesenchymal) cells with less prominent stress fibers, but pronounced F-actin polymerization regions in the leading edges were observed (Figure 4A). Moreover, dispersed aggregates of vinculin instead of vinculin + plaque-like structures were present in the leading edges of the EGF-stimulated GBM cells (Figure 4A). This phenomenon was correlated with the significant decrease of cellular circularity at the population level after 72 h EGF (10 ng/mL) exposure (Figure 4C), and with the prominent increase of the T98G transmigration potential (TMI; Figure 4D). Interestingly, leading-edge formation (Figure 4A) and the induction of T98G invasiveness (Figure 4D) were abolished by Erl in the EGF-treated T98G cells. Erl treatment also led to the disorganization of the F-actin cytoskeleton and focal adhesions’ sides, accompanied by their morphological switch into an epithelioid phenotype. In turn, the Western blot analysis did not reveal any changes in the intracellular vinculin levels under EGF/Erl stress (Figure 4B). Collectively, these observations confirmed the involvement of EGFR-dependent signaling in determination of T98G cell invasiveness.

Finally, we focused on the significance of ROS upregulation for EGF-induced T98G invasiveness. Interestingly, the administration of N-Acetyl-L-cysteine (NAC; 1 mM) did not abolish the EGF-induced morphological changes of the T98G cells and did not inhibit the pro-invasive remodeling of the F-actin cytoskeleton (Figure 5A). On the other hand, NAC remarkably attenuated the EGF-induced upregulation of ROS (Figure 5B,C). This effect was accompanied by a significant inhibition of the EGF-induced T98G motility. At the population level, this was illustrated by a decrease of the average speed of motility and displacement of the EGF/NAC-treated cells (Figure 5D). Accordingly, single cell trajectories of EGF/NAC-treated cells clearly demonstrated a retardation of their motility in comparison to the EGF-stimulated cells (Figure 5E). Notably, NAC had a negligible impact on T98G motility when administered alone (Figure 5D,E). These data show the cooperation of the ROS-dependent and ROS-independent EGFR-dependent pathways that regulate T98G motility and cytoskeleton architecture, respectively. 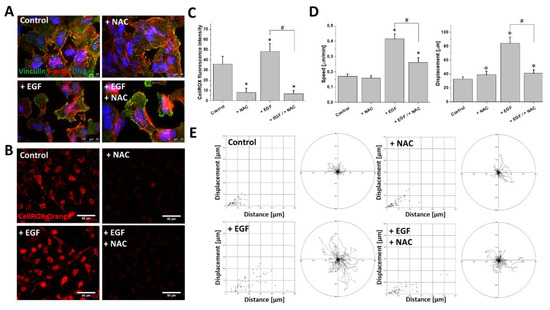 The growth of glioblastoma multiforme (GBM) depends on complex neurochemical signaling networks within the brain tissue. During GBM progression, numerous growth factors are secreted by microglia and/or neural cells that reside in the tumor microenvironment. They result in GBM growth enhancement and in the stimulation of its malignancy. In particular, EGF is involved in the response of brain tissue to pathological processes [2][3][4]. Considering this phenomenon, it is worth emphasizing that the potential of GBM to penetrate and deform healthy brain tissues during invasion [5][6][7] can be related to EGF secretion in the absence of constitutively activated EGF receptors in GBM cells (EGFR type III or EGFRvIII [8]). This may occur during surgical intervention within the tumor area. Moreover, many reports have raised the matter of EGF receptor (EGFR) overexpression in GBM cells and its correlation with GBM malignancy [9]. Taking into account these issues, we focused on the role of the EGF in the regulation of GBM progression and invasion. In our study, EGF induced metabolic reprogramming and enhanced the invasive potential of GBM cells in a manner partly dependent on the concomitant ROS production. Malignant GBM cells must negotiate numerous mechanical obstacles to invade neighboring brain tissue. An effective GBM invasion requires a permissive (elastic) cytoskeleton architecture that determines the directional motility of the cells and their deformability, facilitating their penetration of narrow tissue obstacles and the colonization of distant brain structures [10]. Examination of cytoskeletal rearrangements within the EGF-treated cells revealed a distinct remodeling of the actin cytoskeleton and the redistribution of vinculin towards the cellular leading edges. These effects were accompanied by increased T98G cell motility and enhancement of the GBM cell transmigration potential (TMI). The suppression of pro-invasive (i.e., EMT-related) signaling within GBM cells after chemical EGFR inhibition (by Erl) confirmed the involvement of EGFR signaling in GBM progression [11]. Notably, acquisition of the epithelial phenotype by the Erl-treated GBM cells may also suggest the involvement of other EGFR ligands in determination of the GBM invasive phenotype. Finally, studies on the bioenergetic profiles of GBM cells exposed to EGF revealed considerable changes in the ATP/lactate production. This observation strongly correlates with their enhanced migratory and proliferative activity, which requires considerable amounts of energy in the form of ATP/GTP. Reduction of the ATP and lactate level after erlotinib treatment confirmed the role of the EGFR in the induction of aerobic glycolysis (the Warburg effect). It may also explain the inhibition of the GBM invasiveness as an effect of energy depletion in the absence of the EGF. On the other hand, lower intracellular ATP levels in the EGF-treated cells, accompanied by enhancement of lactate secretion, indicated the increased energy consumption in these cells, compensated by the EGF-induced glycolysis.

In our study, NAC application did not prevent the EGF-induced T98G morphology/cytoskeleton rearrangements. However, it remarkably abolished the EGF-induced triggering of T98G cell motility. This observation indicated the inability of cells to effectively respond to EGF signals in reducing conditions. Concomitantly, it underlined the role of ROS in the regulation of GBM cell invasiveness, justifying a combined application of antioxidants and EGF inhibitors in the GBM therapy [7]. Cellular redox status and the cytosolic distribution of ROS are key players in the regulation of the cytoskeleton dynamics and cellular motility [12]. Notably, their functions depend on the activity of numerous molecular executors, including cytoskeleton-bound small G proteins (incl. Rac1). Furthermore, mitochondria have been reported to depend on the EGFR, and this sensitivity is crucial for metabolic homeostasis of cancer cells. EGFR activation is also related to NOX (NADPH oxidase) [13] mobilization and superoxide production. Our current observations indicated the role of the EGF-induced shift of mitochondrial function towards ROS generation, which is compensated by the induction of energy production by aerobic glycolysis.

Collectively, we present data that confirm the essential role of the EGF in the stimulation of GBM cell invasion and shed light on the role of ROS in this effect. Apparently, EGF induces metabolic reprogramming and ROS production in GBM cells in an EGFR-dependent manner. Collaborative ROS/EGFR-dependent signaling further augments GBM cells’ invasiveness in hypoxic conditions. In the context of the reports of EGFR upregulation in GBM cells, our data point to combined EGFR/ROS targeting as a way to interfere with GBM progression. On the other hand, our data also indicate the need for the new treatment strategies that could combine an anti-EGFR/ROS approach with the application of metabolic inhibitors. The additional metabolic approach might prevent the microevolution of drug resistance and reduce the side-effects of conventional therapies. However, all extrapolations to clinical conditions and correlations with disease progression require further research on in vivo models.