The hypoglycemic effect of two Mexican medicinal plants, Eryngium longifolium and Alsophila firma, is described, which was associated with blocking of the hepatic glucose output due to inhibition of two gluconeogenic enzymes: glucose 6-phosphatase and fructose 1,6-bisphosphatase.

Type 2 diabetes is a worldwide prevalent disease that is due to a progressive loss of adequate β-cell insulin secretion, frequently against a background of insulin resistance. In Mexican traditional medicine, the therapeutic use of hypoglycemic plants to control the disease is a common practice among type 2 diabetic patients. In the present work, we examined the traditional use of the aerial parts of Eryngium longifolium and the rhizome of Alsophila firma, consumed by people use over the day (in fasting state) to control their blood glucose levels, therefore, we aimed to assess the acute hypoglycemic effect of both plants.

Basic phytochemical profiles of both plants were determined and, subsequently, acute toxicity tests were carried out. Then, in vivo hypoglycemic tests were performed in streptozotocin-nicotinamide (STZ-NA) induced hyperglycemic Wistar rats and finally the effect of the plants on three enzymes involved in glucose metabolism was assayed in vitro.

Through HPLC-DAD chromatography, caffeic acid, chlorogenic acid, rosmarinic acid, isoflavones, and glycosylated flavonoids were identified in E. longifolium, while the possible presence of flavanones or dihydroflavonols was reported in A. firma. Acute oral toxicity tests showed no physical or behavioral abnormalities after oral administration of each extract. On the other hand, both plants exhibited a statistically significant hypoglycemic effect, without a dose-dependent effect, in STZ-NA hyperglycemic rats. Furthermore, they inhibited glucose 6-phosphatase (E. longifolium IC50 = 780 µg/ml; A. firma IC50 = 341 µg/ml) and fructose 1,6-bisphosphatase (E. longifolium IC50 = 93 µg/ml; A. firma IC50 = 45 µg/ml) in in vitro assays, which could be associated with the hypoglycemic effect in vivo. Thus, this study confirmed for the first time the traditional use of the aerial part of E. longifolium and the rhizome of A. firma as hypoglycemic agents in a hyperglycemic animal model. In addition, it was concluded that their ability to regulate hyperglycemia could involve the inhibition of hepatic glucose output, which mainly controls glucose levels in the fasting state. 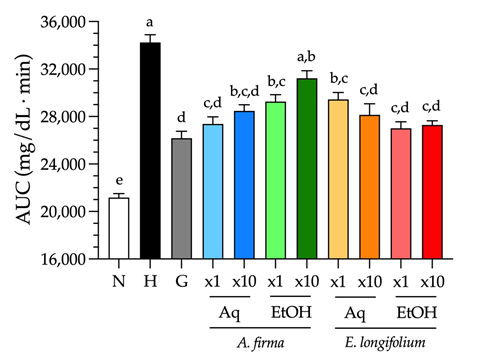 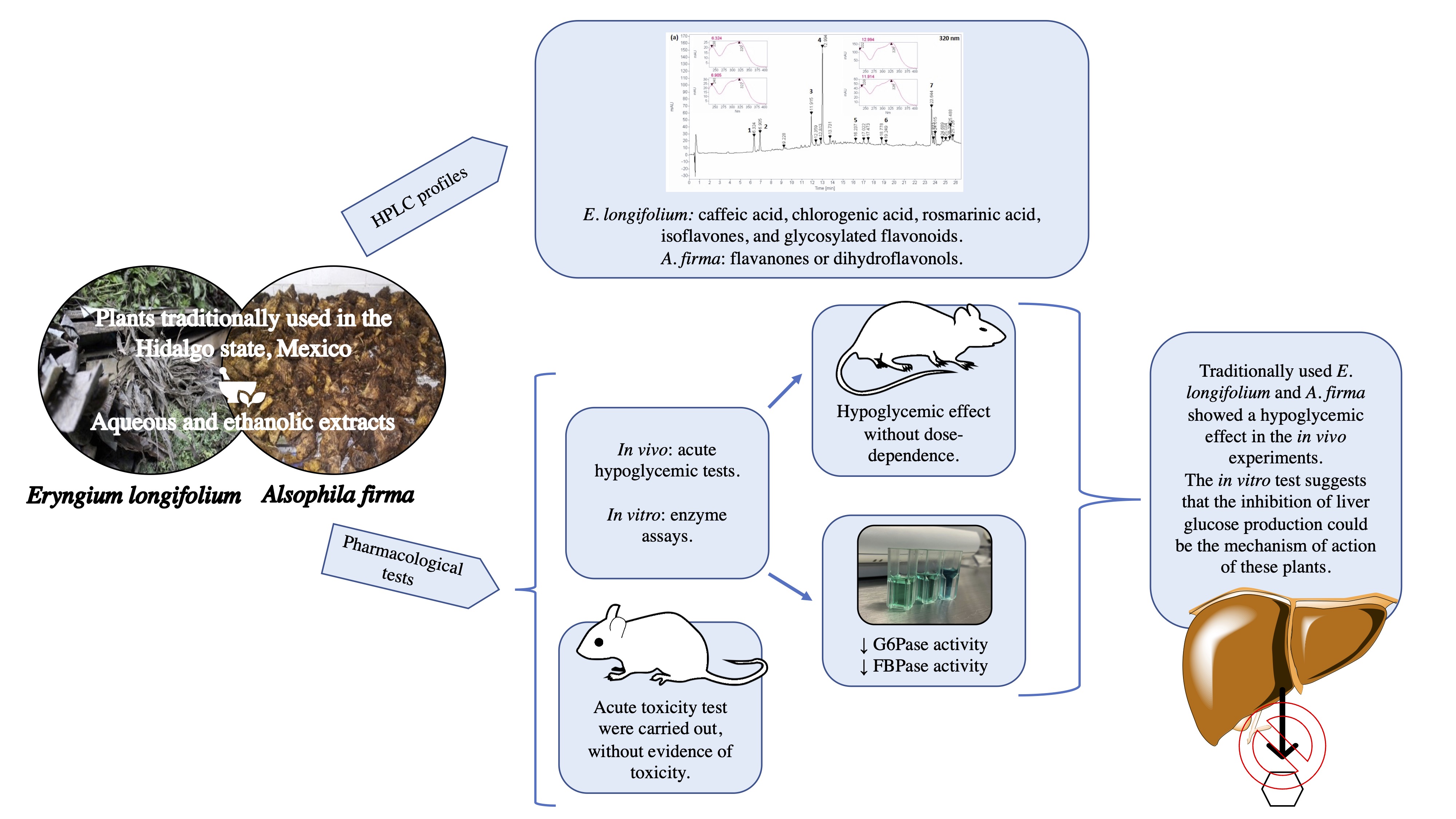