We live and to do so we must breathe and eat, so are we a combination of what we eat and breathe? Here we will consider this question, and the role in this respect of the AMP-activated protein kinase (AMPK). Emerging evidence suggests that AMPK facilitates central and peripheral reflexes that coordinate breathing and oxygen supply, and contributes to central regulation of feeding and food choice. We propose, therefore, that oxygen supply to the body is aligned with not only the quantity we eat, but also nutrient-based diet selection, and that the cell-specific expression pattern of AMPK subunit isoforms is critical to appropriate system alignment in this respect. If this is the case, then aberrant cell-specific changes in the expression of AMPK subunit isoforms could give rise, in part, to known associations between a wide variety of conditions associated with metabolic disorder.

It is evident that we must breathe without serious interruption from birth to death, and we do so with such ease that it almost goes unnoticed, whether we cough, sneeze, snort or, from our partner's perspective, snore. That is, until the onset of certain respiratory diseases, such as sleep-disordered breathing and pulmonary hypertension. These disorders may appear unrelated to each other and to be far removed from food choice and metabolic disease, but evidence of cross-associations is growing.

2. AMPK and the Need to Breathe and Feed

Breathing is coordinated by a sophisticated motor program, which develops in utero in order to coordinate lung ventilation after birth, and responds appropriately to changes in oxygen demand during such activities as exercise, sleep or ascent to altitude. The fundamental rhythmic patterns of ventilatory activity are coordinated by a respiratory central pattern generator (rCPG) through downstream motor outputs from the brainstem and spinal cord, in a similar way to any other type of locomotion or rhythmic behaviour [1]. This occurs independently of peripheral or higher (suprapontine) input, with every breath triggered by cyclical phases of inspiratory muscle contraction (diaphragm, external intercostals), and followed by passive expiration through relaxation of these muscles. In addition, active expiration may be engaged to increase ventilation through recruitment of expiratory muscles (the abdominals and internal intercostals) when the rate of metabolism requires more oxygen. Alternatively, at the end of inspiration, the process of post-inspiration may adapt to reduced requirements by lengthening contraction of the diaphragm and adduction of laryngeal muscles to slow expiratory airflow by increasing airway resistance. These are the principal components of normal breathing (eupnoea), during which the composition and phasic pattern of muscle recruitment/activity is state-dependent. Each component of this cycle is built into the rCPG, central to the activity of which is the pre-Botzinger Complex [2], a brainstem microcircuit from which the rhythm of inspiration originates. In the present context, it is important to note that breathing patterns exhibit acute adaptation when, for example, metabolism increases, and also adapts on longer timescales during growth and maturation, pregnancy, ageing, disease and injury.

Perhaps most important of all is our ability to adapt to deficits in oxygen supply, the most vital elixir of life. This is evident from birth, when hypoxia triggers the first breath due, in part, to the hypoxic ventilatory response (HVR; Figure 1). This response increases ventilatory drive through rCPG, and thus triggers subsequent adaptation to extrauterine life, through maturation of the carotid bodies, our primary peripheral chemoreceptors that drive HVR [3][4][5], and the airways, alveoli and pulmonary vasculature of the lungs that enable optimal gaseous exchange [6]. Gaseous exchange at our lungs is aided by another reflex response to falls in alveolar oxygen availability [7], namely hypoxic pulmonary vasoconstriction (HPV; Figure 1). HPV is a local response mediated by mechanisms intrinsic to the smooth muscles and endothelia of the pulmonary blood vessels, which aids ventilation-perfusion matching, by diverting blood flow through the path of least resistance, from oxygen-deprived to oxygen-rich areas of the lung. By contrast, systemic arteries dilate in response to hypoxia in order to meet the metabolic needs of the tissues they supply [8][9]. 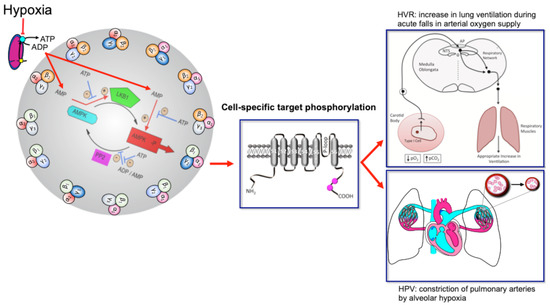 Figure 1. Turn the AMP up to 11 and breathe. Schematic shows the mechanism by which increases in the cellular AMP:ATP and ADP:ATP (adenosine monophosphate and diphosphate to adenosine triphosphate) ratios may activate up to 12 AMPK heterotrimeric subunit combinations, leading to target phosphorylation and induction of the hypoxic ventilatory response (HVR) and hypoxic pulmonary vasoconstriction (HPV). Red arrows indicate pathways leading to AMPK activation by hypoxia, flat heads indicate inhibition, arrow heads indicate activation. Blue arrows with flat heads indicate inhibitory pathways that contribute to the regulation of AMPK activity. Black arrows indicate direction of flow for subordinate pathways. Created by Evans.

The mechanisms of hypoxia-response coupling in those specialised cells that coordinate cardiorespiratory reflex responses to falls in oxygen availability remain keenly debated topics, nowhere more so than with respect to HVR and HPV. However, emerging evidence now strongly suggests that the AMP-activated protein kinase (AMPK) might facilitate both HVR and HPV [10]. This hypothesis [11][12] was built on prior observations that mitochondria of oxygen-sensing cells were exquisitely sensitive to hypoxia, and the proposal that this was due to the selective expression in these cells of a form of cytochrome C oxidase (COX) that was uniquely sensitive to changing PO2 within the physiological range [13][14]. Support for this has been provided not only by the use of mitochondrial inhibitors [15][16][17][18][19][20], but by gene deletion strategies that examined the role of two nuclear encoded atypical subunits of the mitochondrial electron transport chain: (i) NDUFA4L2 encoding NADH dehydrogenase [ubiquinone] 1 alpha subcomplex 4-like 2 (NDUFA4L2) [21]; and (ii) COX4I2 encoding cytochrome c oxidase subunit 4 isoform 2 (COX4I2) [22][23]. NDUFA4L2 is a subunit of complex I, which transfers electrons from NADH to ubiquinone, while COX4I2 is a subunit of cytochrome c oxidase, which catalyses the transfer of electrons from cytochrome c to oxygen. NDUFA4L2 and COX4I2 are constitutively expressed under normoxia not only by oxygen-sensing type I cells of the carotid body [24], but also by pulmonary arterial myocytes [25][26]. In most other cell types NDUFA4L2 and COX4I2 expression is ordinarily low, although their expression may be increased during prolonged hypoxia [22][23]. Accordingly, carotid body type I cell responsiveness to acute hypoxia and acute HVR are abolished in mice by conditional deletion of Cox4I2 in tyrosine hydroxylase expressing catecholaminergic cells [27], while HPV is occluded in isolated, ventilated and perfused lungs from Cox4I2 knockout mice [28]. Therefore, these atypical nuclear encoded subunits not only represent a further distinguishing feature of oxygen-sensing cells, but, at least in the case of COX4I2, appear to be critically important for hypoxia-response coupling within the physiological range of PO2.

Modulation of the properties of COX by COX4I2 is likely critical to hypoxia-response coupling in these highly specialised cells, because COX4I2 lowers the oxygen affinity of COX [29] and removes the inhibition by ATP that is normally conferred by COX4I1 [23][30]. In oxygen-sensing cells, therefore, COX4I2 expression may facilitate rapid decreases in ATP production as oxygen availability falls within the physiological range (~100 mmHg to ~20 mmHg) [31], in part because the rate of mitochondrial oxidative phosphorylation will not increase as ATP levels decline [22][25][30][32]. COX4I2 may thus accelerate increases in adenosine diphosphate (ADP):adenosine triphosphate (ATP) ratios, which would in turn increase adenosine monophosphate (AMP):ATP ratios via the adenylate kinase reaction [33][34], leading ultimately to concomitant activation of AMPK [35][36].

Consistent with this, all agents that inhibit mitochondrial oxidative phosphorylation activate AMPK in an AMP-dependent manner [35][36]. Moreover, there is now a growing realisation that AMPK is capable of phosphorylating targets outside of those canonical pathways by which it regulates cell-autonomous metabolic homeostasis [37][38][39][40][41][42][43][44][45][46]. In this way, it appears that, during evolution, the role of AMPK in regulating metabolic homeostasis has been extended through natural selection to support system-level control of substrate supply (e.g., of oxygen, glucose and fatty acids) in order to maintain energy (ATP) homeostasis across the whole body [11].