Multistrain probiotics comprise two or more species or strains of important microorganisms as a consortium beneficial to the administered animal. Several studies are being carried out to explore their potency or efficiency. They have proven to be a promising alternative to antibiotics growth promoters and were responsible for enhancing gut health, growth performance, maintaining a balance in gut microbiota, stimulating immunity against pathogenic organisms, improving digestion, and overall production efficiency in ruminants, poultry, and swine production.

Probiotics preparations come in various forms, and their efficacy sometimes varies depending on whether they are mono- or multistrain. The new approach in probiotics utilization has been to use a combination of probiotics strains. This strategy is presumed to have highly influenced animal nutrition, exerted increased health benefits, and created an even more favorable balance of intestinal metabolism, animal welfare [1], and performance than single-strain cultures [2]. They can be administered via several routes (Figure 1), but the oral method is most common in animal husbandry. 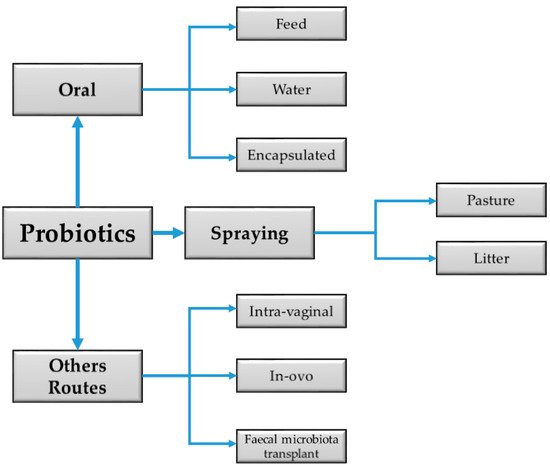 2. Common Probiotic Strains and Their Mode of Action

Bacteria, bacteriophages, microalgae, and yeasts are all examples of probiotics [3]. Although numerous microorganisms have probiotic potential, Lactobacillus, Streptococcus, Enterococcus, Lactococcus, and Bifidobacteria remain the most commonly used probiotic agents in livestock to date [2][3][4]. Saccharomyces (S. cerevisiae and S. bourlardii), Candida pintolopesii, and Aspergillus oryzae are typical non-bacterial probiotics [4][5][6]. There are currently numerous commercially available mono- and multistrain probiotics [7].
Even though probiotics are considered a possible replacement for antibiotic growth promoters, their mode of action appears to be distinct [8]. Probiotics impacts are species-specific [9] and may also rely on the physiological and immunological condition of the administered animal. Different probiotics exert their benefits via mechanisms yet to be fully understood but are presumed to be related to their gastrointestinal lumen or wall activities. Their primary function results from the production of a range of antibacterial and bacteriostatic substances, such as organic acids, bacteriocins, diacetyl, antibiotics, and hydrogen peroxide [10], which exert beneficial effects through three primary pathways [11]:
(1) Competitive exclusion,
(2) Bacterial antagonism, and
(3) Immune system stimulation.
Probiotics also impact the health of the administered host via competition between beneficial bacteria and pathogens, replacement of pathogens by probiotic bacteria, and regulation of innate and adaptive immunity [12]. Due to their antagonistic effect, probiotics can hinder the growth of noxious bacteria by altering the gut microbiome, reduce the spread of pathogens and their emission during infection, decrease gut permeability, ameliorate clinical symptoms in livestock, boost immunity, and improve disease resistance and health [13][14][15]. In addition, they appear to be effective in foodborne pathogen reduction, for example, Salmonella, Escherichia coli, Campylobacter, Clostridium, Staphylococcus aureus, and perfringens [16][17], hence improving intestinal digestion and nutrient absorption and supporting a healthy micro ecological state. They can even aid pollution reduction by preventing the accumulation of harmful chemicals and lowering ammonia emissions in animal manure [18][19].

3. Multistrain Probiotic Use in Ruminants

4. Multistrain Probiotic Use in Poultry

Pathogenic bacteria including E. coli, Clostridium, and Salmonella appear to be a severe concern in chicken production, causing mortality, lowered growth rate, and low output. Antibiotics had previously played an important role in combating or regulating this problem; however, their prohibition has resulted in the use of probiotics to fill the void. Generally, because of their high fermentation utilization activity, probiotics promote protein and lipid digestion and interacts with enzymes to break down dietary molecules into simpler forms for digestion and absorption. They stimulate the production of digestive enzymes for carbohydrate metabolism, lower cholesterol, help in the synthesis of nutrients such as vitamins, influence the pH level in the poultry gut, and improve the productive performance, intestinal flora, and histomorphometry in heat-stressed chickens [18][41][42][43].
When broiler chickens were experimentally challenged with Pasteurella multocida, a highly contagious poultry disease that causes fowl cholera [44][45], supplementing dietary multistrain containing Saccharomyces cerevisiae, Lactobacillus fermentum, Pediococcus acidilactici, Lactobacillus plantarum, and Enterococcus faecium improved feed efficiency, growth performance, and intestinal health. It mitigated clinical signs, inflammatory reactions, and mortality-related symptoms [46]. In previous studies, successes have been recorded on probiotics’ potency in attenuating the colonization of avian pathogens in the chicken gut [47][48][49][50][51]. These antimicrobial effects are traceable to bacteriocins, organic acids, hydrogen peroxide, and short-chain fatty acids secreted by probiotic bacteria [52]. Besides, the transcriptional profiles of anti-inflammatory genes in the intestinal mucosa of probiotic-fed birds were elevated, haemato-biochemical markers such as packed cell volume, total cholesterol, glucose, proteins, white blood cells, and lymphocytes were also improved. There is a possibility that perhaps the synergy between lactic acid bacteria and yeast strains resulted in higher antimicrobial activity against P. multocida and enterobacteria in the guts of supplemented birds, as well as the ability of the combination to out-compete pathogens, thereby preventing them from attaching to the intestinal walls and as a result improve intestinal microbial balance [53].

5. Multistrain Probiotic Use in Swine

Feed prices contribute to almost two-thirds of overall swine production expenses; hence, to ensure profitability in the pig industry, efficiency in converting feed into pig body mass is essential [54]. Moreover, improved metabolic utilization of dietary nutrients is dependent primarily on a healthy gut, which can lead to improved feed digestion and nutrient absorption [55]. Research has shown that multistrain probiotics could enhance growth performance, feed efficiency, and nutrient digestibility [56][57][58]. It has also been effective in maintaining a balance in the intestinal microbial flora [59][60], stimulating immunity [32][61], increasing litter size, vitality, and weight, and reducing fecal noxious gas emission in pigs [57][58]. A summary of the effects of some multistrain probiotics on pigs of different physiological statuses is presented in Table 2.
Table 2. Various combinations of multistrain probiotics and their effect on swine production.
BWG, Body weight gain; ADWG, Average daily weight gain; n.s, not stated by the author.

In ruminants, poultry, and swine, multistrain probiotics have proven to be a viable alternative to antibiotics, and their usage in animal husbandry continues to grow. The effect on and responses of host animals, however, differs among literature. The variability in results might be due to the microorganism type or strains combined, as different species could possess distinct metabolic effects. The survivability of all the strains until delivery to the gut may also be difficult to ascertain. Probiotic dosage, the number of viable organisms in each dose, host animal physiological status and age, environment, diet composition, production procedures, and the mode of administering to the animal could all have a role. There were also limited reports on the greater benefits of multistrain probiotics over single strains in livestock. As a result, further research is needed to understand the interaction mechanisms among the combined microbes and the host’s gut microbiota and the unique role played by the individual microbe. In addition, comparison among the investigated animals and direct comparisons between the mono- and multispecies probiotics should be considered. Finally, stringent recommendations for optimal benefits should be provided.