Nucleobindin 2 (NUCB2) was first described in 1994 in KM3 acute lymphoblastic leukemia cell line as a DNA binding/EF-hand/acidic-amino acid-rich protein. It has been extensively studied since Oh-I et al. identified nesftain-1 as a NUCB2 cleavage product. Several reports indicate that NUCB2/NESF-1 is also expressed in many organs and tissues (e.g., in the stomach, pancreas, heart, reproductive organs, and adipose tissue).

Nucleobindin 2 (NUCB2) was first described in 1994 in KM3 acute lymphoblastic leukemia cell line as a DNA binding/EF-hand/acidic-amino acid-rich protein [1][2]. It has been extensively studied since Oh-I et al. identified nesftain-1 as a NUCB2 cleavage product [3]. Several reports indicate that NUCB2/NESF-1 is also expressed in many organs and tissues (e.g., in the stomach, pancreas, heart, reproductive organs, and adipose tissue) [4][5][6][7][8]. Nucleobindin-2/Nnesfatin-1 is also a secretory component of various body fluids, including saliva, synovial fluid, milk, and plasma or serum [9][10][11][12][13]. As NUCB2 and nesfatin-1 are colocalized, these two names are used interchangeably. The NUCB2/NESF-1 gene in humans is located on chromosome 11 and consists of 14 exons spanning 54 785 nucleotides [14]. Nucleobindin-2 is a 396-amino acid protein preceded by a 24-amino acid signal peptide [15]. The protein is proteolytically cleaved by the prohormone convertase. As a result, N-terminal nesfatin-1, nesfatin-2, and the C–terminal nesfatin-3 are formed [16]. The functions of nesfatin-2 and the C–terminal nesfatin-3 have not been understood yet [17]. Nucleobindin-2 has characteristic functional domains, such as a signal peptide, a Leu ⁄ Ile rich region, two Ca2+ binding EF-hand domains separated by an acidic amino acid-rich region, and a leucine zipper. Therefore it may play a role in many cellular processes [18][19] ( Figure 1 ). Despite the increasing knowledge about the expression and regulation of NUCB2/NESF-1, its role in physiology and pathology is still poorly understood. 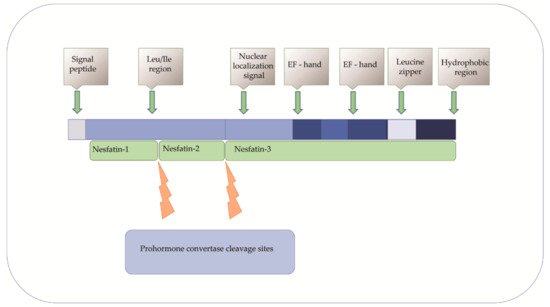 Figure 1. Structural domains of NUCB2 and its processing to protein derivatives, i.e., nesfatin-1, nesfatin-2, and nesfatin-3.

This protein is involved in the regulation of many intracellular processes. Its metabolic function includes food intake, glucose metabolism, and the regulation of immune, cardiovascular, and endocrine systems [20][21][22][23]. Recently, nesfatin-1 has been identified as an anorexigenic neuropeptide that seems to play a crucial role in appetite regulation and energy homeostasis [24]. Oh-I et al. found that intracerebroventricular (IVC) injection of nesfatin-1 decreased food intake in a dose-dependent manner in rats [3]. Furthermore, lower nesfatin-1 concentrations were observed in obese children compared to healthy children [25]. It was also suggested that NUCB2/NESF-1 expressed in the parvocellular region contributed to anorexia by secreting nesfatin-1 [26][27][28]. Nesfatin-1 was reported as a suppressor of gastric emptying and an inhibitor of gastroduodenal motility in mice and rats [21][29]. The expression of NUCB2/NESF-1 was also observed in pancreatic islets, which suggests its role in glucose homeostasis [30]. Su et al. demonstrated that nesfatin-1 reduced blood glucose levels in hyperglycemic db/db mice [31]. Moreover, Gonzales et al. demonstrated that nesfatin-1 enhanced glucose-stimulated insulin secretion in mouse pancreatic β- cells [32]. Nesfatin-1 was found to be an anti-inflammatory and antiapoptotic agent in rats with traumatic brain injury [33]. It was demonstrated that the administration of nesfatin-1 30 min after head trauma could significantly suppress inflammatory-related proteins such as tumor necrosis factor-alpha (TNF-α), IL-1β ( interleukin-1 β), and IL-6 (interleukin-6). Moreover, it was also shown that nesfatin-1 reduced the activity of caspase-3 and the number of apoptotic neuronal cells in traumatic rat brain tissue. It is known that NUCB2/NESF-1 is implicated in the inflammatory response by its involvement in the tumor necrosis factor/tumor necrosis factor receptor 1 (TNF/TNFR1) signaling. Islam et al. revealed that tumor necrosis factor receptor 1 release required the calcium-dependent formation of NUCB2/NESF-1 and aminopeptidase regulator of TNFR1 shedding (ARTS-1) to promote exosome-like vesicle release in human vascular endothelial cells [34]. Feijóo-Bandín et al. showed that mouse and human cardiomyocytes could synthesize and secrete nesfatin-1, which helps regulate glucose metabolism in the hearts of humans and experimental animals [35]. Additionally, the plasma concentration of nesfatin-1 in patients with acute myocardial infarction (AMI) was lower than in the control group, which showed nesfatin-1 to be a protective agent against AMI [36]. On the other hand, it was also found that the infusion of nesfatin-1 to the cerebral cortex and subcutaneous tissue resulted in elevated blood pressure, while intravenous infusion led to vasoconstriction [37]. The role of nesfatin-1 in the cardiovascular system is still poorly understood. There is some evidence that NUCB2/NESF-1 is related to female pubertal maturation. Garcia Galano found that during the female pubertal transition, NUCB2/NESF-1 mRNA and protein levels were significantly increased in the hypothalamus [38]. Intracerebroventricular (ICV) injections of nesfatin-1 induced increased circulating levels of gonadotropin-releasing hormone, luteinizing hormone (LH), and follicle-stimulating hormone (FSH) [39]. Expression of NUCB2/NESF-1 was detected in Leydig cells in rodents and humans. During the pubertal transition, NUCB2/NESF-1 protein level in these cells was significantly increased [38]. To conclude, recent studies have identified nuclebindin-2/nesfatin-1 as a pleiotropic peptide with many physiological functions. Recently, the expression of NUCB2/NESF-1 has been linked to tumor development and metastasis. However, the exact role of NUCB2/NESF-1 in human malignancies is still poorly understood ( Figure 2 ). The current review is the first to present NUCB2/NESF-1 as a potential new prognostic or predictive marker in cancers. 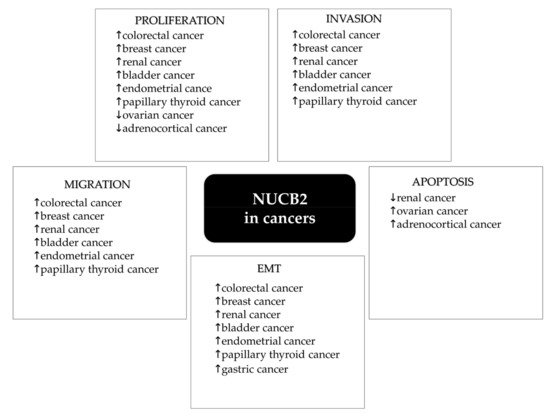 Additionally, they found a significant positive correlation between nodal metastasis and the clinical stage. Moreover, it was demonstrated that breast cancer patients with high NUCB2 /NESF-1 expression had a significantly poorer overall survival (OS) [40]. Interestingly, the survival analysis with an online analysis tool on 2032 breast cancer cases indicated that a good prognostic effect of high NUCB2 expression was related to longer OS [41]. These conflicting results suggest an important role of NUCB2/NESF-1 in breast cancer progression and highlight a need for further investigation in this area.

Proliferation is one of the most important characteristics of cancer. Some proteins are overexpressed in cancer cells and indicated as proliferation markers, which makes them useful in cancer diagnostics. Among the best-evaluated cell proliferation molecules, we classified, e.g., Ki-67, proliferating cell nuclear antigen (PCNA), or minichromosome maintenance (MCM) proteins. Although the proteins have been extensively described in the literature, they also have some limitations when used in the diagnostic process [46]. As a result, there is a need to identify new proliferation-related molecules in cancers. In vitro studies showed that NUCB2/NESF-1 knockdown with siRNA or shRNA in breast cancer (MCF-7, SKBR-3), bladder cancer (T24, 5637), glioblastoma (U251, U87), endometrial cancer (Ishikawa and Sawano), and thyroid cancer (TPC-I, KI) cell lines resulted in the inhibition of cell proliferation [47][48][49][50][51]. Moreover, proliferation-related proteins (Ki-67 and PCNA) were decreased in NUCB2/NESF-1 shRNA-transfected thyroid cancer cells compared to the control. To evaluate the role of NUCB2/NESF-1 related to the growth and metastasis of glioblastoma, NUCB2/NESF-1-silenced cells were injected into nude mice. The findings indicated that the NUCB2/NESF-1 ablation group’s tumor volume was significantly smaller than the control [51]. Additionally, NUCB2/NESF-1 knockdown in the 786-O renal cancer cell line inhibited cell proliferation by arresting the cell cycle at the S phase. Moreover, reduced tumor volume and growth rate were observed in NUCB2/NESF-1-knockdown renal cancer cells in the mice model compared to that in the negative control group [52]. Interestingly, no changes were found in the proliferation properties of NUCB2-knockdown colon cancer cells [42]. Surprisingly, Ramanjaneya et al. found that treatment of H295R adrenocortical cells with recombinant nesfatin-1 resulted in a decreased proliferative capacity of the cells [53]. They put a hypothesis that NUCB2/NESF-1 might be a therapeutic target for adrenal cancer. Similar conclusions were made by Xu et al., who evaluated the treatment of HO-8910 ovarian cancer cells with recombinant human nesfatin-1. It was revealed that nesftain-1 decreased cell proliferation in ovarian cancer in vitro [54]. Surprisingly, treatment of the endometrial cancer cell line (Ishikawa) with recombinant nesfatin-1 promoted cell proliferation [49]. Dysregulation of cell proliferation is known to be related to the mTOR signaling cascade. Takagi et al. revealed that NUCB2/NESF-1 increased mTOR phosphorylation, which resulted in the intense proliferation of the endometrial cancer cell line [49]. Contradictory findings were presented by Xu et al., who reported that NUCB2/NESF-1 decreased mTOR phosphorylation and acted as a tumor suppressor in ovarian cancer [54]. Similarly, Ramanjaneya et al. indicated that NCB2/NESF-1 decreased ERK1/2 phosphorylation, which resulted in decreased proliferation in H295R adrenocortical carcinoma cells [53]. Bearing in mind the above, we may conclude that the role of NUCB2/NESF-1 in cancers is variable and tissue-specific. Additionally, Xu et al. concluded that nesfatin-1 could inhibit the proliferation in human ovarian epithelial carcinoma cell line HO-8910 by inducing apoptosis via the mTOR and RhoA/ROCK signaling pathway [54]. Rho Kinases (ROCKs) are known to be modulators of cell survival and apoptosis. It was reported that NUCB2/nesfatin-1 treatment evoked a marked activation of RhoA, which enhanced apoptosis and inhibited proliferation.

The balance between cell proliferation and apoptosis is crucial for normal development and homeostasis in adults [55]. An imbalance between these two processes causes cancer. Apoptosis is a well-known mechanism of programmed cell death, which plays a crucial role in development and homeostasis. The loss of apoptotic control allows cancer cells to survive and favors tumor progression. One of the major challenges in cancer treatment is identifying factors that terminate the uncontrolled growth of cancer cells [56]. The effects of nesfatin-1 on apoptosis of H295R adrenocortical cells using the DNA fragmentation assay were assessed. The study found that nesfatin-1 induced a concentration-dependent increase in apoptosis of H295R cells compared to control cells. Moreover, the analyses of pro-and-anti-apoptotic gene expression following nesfatin-1 treatment in H295R cells were performed. A significant increase was found in the proapoptotic Bax ( p < 0.05), while a significant decrease was reported in antiapoptotic BCL-XL ( p < 0.01) and BCL-2 ( p < 0.05) mRNA expression following nesfatin-1 stimulation [53]. The study may contribute to cancer prevention and therapy.

To summarize, NUCB2 seems to be an important factor in cancer cell migration and invasion and may affect the expression of MMP-2 and MMP-9. The mechanism underlying this observation is unknown.

The above study confirmed that NUCB-2 might promote EMT via the AMPK/TORC1/ZEB1 pathway in cancer. In addition, a positive correlation was found between the expression of NUCB2/NESF-1 and EMT-related genes such as desmoplakin (DSP) , Integrin Subunit Alpha V (ITGAV) , metalloproteinase 3 ( MMP3) , tetraspanin 13 ( TSPAN13), and Cadherin 2 ( CDH2) in endometrial cancer cells [57].