Isothiocyanates (ITCs) are biologically active molecules found in several natural products and pharmaceutical ingredients. Moreover, due to their high and versatile reactivity, they are widely used as intermediates in organic synthesis.This review considers the best practices for the synthesis of ITCs using elemental sulfur, highlighting recent developments. Additionally, we also reveal that in the catalyst‑free reaction of isocyanides and sulfur, two—until this time overlooked and not investigated—different mechanistic pathways exist.

Isothiocyanates (ITCs) are biologically active molecules occurring in cruciferous vegetables such as broccoli, watercress, cabbage and cauliflower suggested to have anti-tumour activity [1][2][3]. They are represented among natural products and pharmaceutical ingredients by the biologically relevant welwitindolinone and hapalindole alkaloids isolated from various algae species [4]. Notably, glucosinolates, found as secondary metabolites in almost all plants, contain the –S-C=N- functional group and act as a precursor for various ITCs [5][6]. Tissue damage of the plant promotes myrosinase enzyme activity as a defence mechanism, triggering the degradation of glucosinolates, and releasing, e.g., allyl, benzyl or phenethyl ITC or sulforaphane [7]. Sulforaphane, in particular, showed neuroprotective activity in the treatment of the neurodegenerative Alzheimer’s and Parkinson’s diseases [2][8]. Moreover, ITCs express significant antiproliferative activity as well [3][9], and the anti-microbial nature of certain ITCs makes them useful in food preservation [10]. Recently, they have also been applied as covalent warheads for labelling cysteine or lysine residues in medicinal chemistry and chemical biology applications [11][12][13][14]. Notably, due to their high and versatile reactivity, they are widely used as intermediates in organic synthesis [15][16]. ITCs readily react with nucleophiles, participate in cycloadditions leading to diverse heterocycles or are used in polymer chemistry [17].
The synthesis of ITCs generally relies on the reaction between thiophosgene or CS2 and amines and thus involves the use of highly toxic reagents with narrow functional group compatibility [18][19][20][21][22]. Various thiocarbonyl transfer reagents appeared in recent decades to overcome these drawbacks, such as thiocarbonyl-diimidazole or dipyridin-2-yloxymethanethione [23][24]. Decomposition of thiocarbamates or dithiocarbamate salts with various reagents offers a good alternative as well; however, this approach first requires the synthesis of the appropriate precursors [25][26][27][28][29][30]. Nitrile oxides react with thiourea to afford ITCs and harmless urea, but one should note that the instability of nitrile oxides leads to many by-products, rendering this approach less attractive [31]. The reaction of isocyanides with disulfides in the presence of thallium (I)-salts as catalysts also leads to the formation of ITCs [32]. This area has been reviewed recently [33]; thus, in this review, we focus solely on sulfur-based synthetic methods, which greatly emerged in recent years (Scheme 1). Elemental sulfur acts as the most atom-efficient surrogate to integrate the sulfur atom into the product [34][35][36]. The process is based on the nucleophilic attack of in situ generated carbene functionalities (1) on sulfur that behaves as an electrophile due to its empty d-orbitals [37]. This approach leads to thiocarbonyl surrogates (2), usually dihalogenides, reacting with primary amines (3) to provide ITCs (4). Otherwise, isocyanides (5), where the terminal carbon atom is able to act as a carbene, also undergo reaction with sulfur under thermal conditions or in the presence of external additives to yield ITCs. Notably, the addition of sulfur to formaldimines was also reported to generate ITCs, but this method is barely used nowadays [38][39]. The convenient activation of sulfur by nucleophilic additives, such as aliphatic amines and hydroxyl, sulfide and cyanide anions [40], and the corresponding significantly milder conditions compared to thermal activation support the notion that a switched mechanism also exists, involving a nucleophilic sulfur anion (Sx−) and the carbene of the isocyanide (5) acting as an electrophile (Scheme 2). The experimental findings from the research of Al-Mourabit et al. and Meier et al. and those found by our research group also support this latter presumption [41][42][43][44][45][46]. The exact number or the distribution of sulfur atoms in the forming anions was investigated experimentally and theoretically as well, suggesting that it depends on the reaction conditions and reactants [47]. 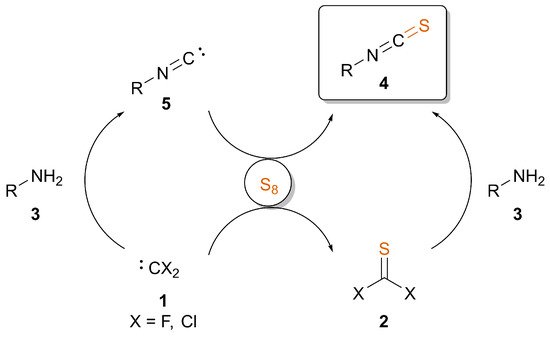 Scheme 2. Nucleophilic activation of sulfur, inducing the transformation of isocyanide (5) to ITC (4).

2. Overview and Practical Considerations of the Discussed Methods

Table 1 provides a comparison between the discussed synthetic approaches starting from amines or isocyanides with sulfur. When designing a multistep synthesis plan, depending on the stability of the substrate, one should consider the nature of additives, solvent, temperature and inert conditions if necessary. Generally, reactions involving difluorocarbene or thiocarbonyl fluoride require inert conditions, while isocyanide can be transformed to ITC under less strict conditions. The modification of amines is most effective using PDFA, but in the case of sensible compounds, one may turn to the room temperature approach involving F3CSiMe3 as a carbene source. The presence of potassium fluoride, however, may result in the removal of silyl groups on a complex structure, and a copper catalyst might lead to side coupling reactions and waste containing transition metals. Selenium and tellurium should be handled with care due to toxicity, while Mo or Rh catalysts increase the price and, again, transition metals in the waste. ITC formation from isocyanides, on the other hand, is very effective in the presence of bases. This approach can be performed in a relatively short reaction time compared to the transition metal-catalyzed pathways, even under aqueous conditions. Based on the scope of substrates in the reported methods, one may note that all approaches provide ITCs in good to excellent yields. Challenging derivatives might be trityl ITC, generally obtained in lower yields, presumably because of steric hindrance, and low-molecular weight aliphatic ITCs, such as tert-butyl ITC due to its volatile nature.

Table 1. Summary of methods for ITC synthesis with the application of elemental sulfur

ITCs are a biologically and synthetically relevant functional group, being present in important metabolites, natural products and synthetic intermediates. Their efficient and clean synthesis is of high interest, leading to the appearance of several recent methods. In particular, there are two strategies involving elemental sulfur for the incorporation of the sulfur atom, offering practical and modern approaches. The in situ generation of thiocarbonyl fluoride from difluorocarbene and sulfur provides ITCs with primary amines, or sulfuration of isocyanides may directly lead to ITCs under thermal-, catalytic- or nucleophile-induced conditions. Based on previous literature data and our recent results, we highlighted mechanistic insights into the latter transformation. Besides the conventional nucleophilic carbene and electrophilic sulfur setup, a switched mechanism is also proposed, where the polysulfide anions activated by a nucleophile are able to transform the isocyanide to ITC. This approach offers an efficient, mild and green synthesis of ITCs. We expect that this spotlight on ITC synthesis revealing different mechanistic pathways will inspire further research in the field and open up novel synthetic methodologies due to a deeper understanding.