Decarbonization plays an important role in future energy systems for reducing greenhouse gas emissions and establishing a zero-carbon society. Hydrogen is believed to be a promising secondary energy source (energy carrier) that can be converted, stored, and utilized efficiently, leading to a broad range of possibilities for future applications.

The increase in atmospheric greenhouse gas (GHGs) concentrations has raised concern regarding climate change, which is currently regarded as the largest global issue that needs to be urgently mitigated. In 2019, the total carbon emitted from the energy-related sector was approximately 33 Gt-CO2 [1], approximately 87% of the total globally emitted CO2. Moreover, this value is predicted to increase due to increasing global energy consumption. The Kyoto Protocol [2], which was signed by 192 countries and entered into force in 2005, was an organized global effort to combat climate change. This effort was followed by the Paris Agreement [3] in 2015, which aimed to limit the global average temperature increase to under 2 °C while actively attempting to limit this increase to 1.5 °C. The strategy to establish a low-carbon energy system is believed to be crucial for reducing GHG emissions. Several evident efforts have been proposed, including reducing fossil fuel consumption, increasing the renewable energy share, and decreasing primary energy intensity by improving energy efficiency [4][5]. The energy transition considering a strong motivation for fuel decarbonization and an increase in renewable energy share must be taken seriously for establishing a carbon-free society. Japan and China have committed to achieving their carbon neutrality targets by 2050 and 2060, respectively [6].
Recently, the COVID-19 pandemic has caused several changes in systems, including the energy system. Lower energy demand during the pandemic has resulted in the reduction of fossil fuel consumption, especially coal [7], which was running to half of its capacity by 2020. In addition, the increasing share of renewable energy sources has also cumulatively added a positive effect on the global energy transition trend [8]. However, energy transition also faces several challenges, including the storage of renewable energy sources and energy balancing following the fluctuation of renewable energy sources [4].
In terms of energy transition, hydrogen is predicted to have a more significant and pivotal role in the future, owing to its characteristics and applicability. Hydrogen is a carbon-free fuel; hence, its oxidation leads to CO2-free utilization, leading to the actualization of fuel decarbonization. Hydrogen is the most abundant element on Earth, although it is naturally available in its oxidized state (water). It can be produced from primary energy sources through various conversion technologies, including thermochemical, electrochemical, and biological routes. In addition, hydrogen is convertible to and from other secondary energy sources, such as electricity and heat, leading to possible mutual conversion among these secondary energy sources. Hydrogen utilization covers a broad range of oxidation technologies, including turbine combustion, internal combustion engines, fuel cells, and fuel mixing [9][10]. Hydrogen can also be adopted as an effective energy storage system, such as batteries. Compared to conventional batteries, which have characteristics of self-discharge and capacity degradation following the storage period and cycle, hydrogen can store the energy for a longer period, while maintaining its high energy density.
The massive future hydrogen deployment is expected to establish the hydrogen economy, in which hydrogen can be economically competitive. This massive deployment demands a broad range of hydrogen storage and transportation, ranging from small scale (e.g., vehicles) to large scale (e.g., power generation). Hydrogen is the lightest substance in this universe, with a density of 0.081 kg/m3 at 27 °C and 1 atm. Hydrogen has an excellent gravimetric energy density with a lower heating value (LHV) of 118.8 MJ/kg, but it possesses a very low volumetric energy density of approximately 3 Wh/L at ambient conditions (temperature and pressure of 20 °C and 1 atm, respectively) [11]. These characteristics pose the largest challenge in hydrogen utilization; therefore, developing and adopting an effective storage method for hydrogen is crucial. In general, hydrogen can be stored through different storage technologies, including compression, liquefaction, adsorption, hydrides, and reformed fuels. Selecting appropriate technologies to store hydrogen is influenced by its application, transportation mode, storage period, and other conditions [12].
Among these hydrogen storage systems, liquid hydrogen is considered promising in terms of both gravimetric and volumetric hydrogen densities, high hydrogen purity, and the possibility for low-pressure storage [13]. Liquid hydrogen was initially produced in 1898, and its application as a rocket fuel was adopted at the beginning of the 1950s [14]. As the demand for aerospace and other applications is increasing, the production of liquid hydrogen also increases. Moreover, the rapid growth of various hydrogen applications, including fuel-cell-based power generators and vehicles, demand high purity of hydrogen on a large scale [14], which can be provided by liquid hydrogen-based storage and transportation. Additionally, liquid hydrogen is considered to be the most feasible storage and distribution method to facilitate the demand for mobility-based hydrogen considering economy, energy density, and technical issues [15].
Figure 1 shows the basic supply chain of liquid hydrogen, covering hydrogen production, liquefaction, transportation, distribution, and utilization. Hydrogen can be produced from various primary energy sources, including conventional fossil fuels, renewable energy sources, and surplus energy (heat and electricity). This conversion can be conducted through electrochemical (electrolysis), thermochemical (gasification, pyrolysis, steam reforming, and chemical looping) [16], and biological processes (fermentation, biophotolysis, and microbial electrolysis) [17]. The produced hydrogen is then liquefied before being loaded for transportation. Various transportation options are available, such as sea tankers, trucks, and railway tankers. Transportation covers long-distance international shipping and domestic distribution. In the utilization sites, liquid hydrogen is unloaded and regasified before being distributed to small sale consumers.

Hydrogen is the simplest substance (one proton, one electron, and no neutron), non-toxic, and has no color, odor, or taste. In addition, at ambient conditions (temperature and pressure of 20 °C and 1 atm, respectively), the hydrogen molecule is extremely small (van der Waals radius of 120 pm) and about 14 times lighter than air at 2.016 g/mol, and has a high diffusion rate (0.61 cm2/s) and buoyancy [12]. The bombardment of neutrons with hydrogen leads to the formation of isotopes, including deuterium and tritium, which are radioactive and are utilized in many nuclear devices [18]. The flashpoint (the temperature at which the fuel generates sufficient vapor amount to facilitate a flame at its surface when the ignition source exists) of hydrogen is –231 °C, which is the lowest compared to other fuels. As the flashpoint indicates easy fuel combustion, the very low flashpoint of hydrogen is advantageous because of the possibility of a simpler system to ignite and combust hydrogen [19]. Table 1 lists the physical properties of hydrogen.
Table 1. Physical properties of hydrogen.
Figure 2 shows the correlation between hydrogen density and temperature at specific pressures. At ambient pressure (1 atm), hydrogen liquifies at a temperature of −253 °C, leading to a significant increase in its density. Hydrogen has a critical temperature and pressure of −240 °C and 1.3 MPa, respectively. Increasing the pressure to 1 MPa leads to an increase in the boiling point, although a similar graph is obtained at 0.1 MPa. When the pressure is increased further and higher than its critical point, different trends of graphs are shown because there is no latent heat under these supercritical conditions. 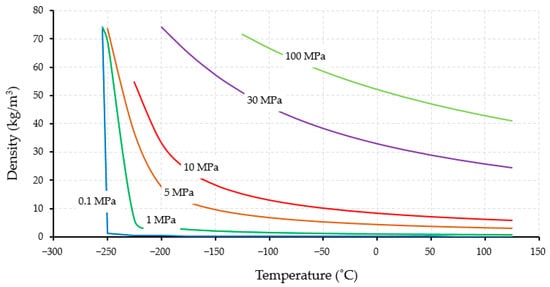 Figure 2. Correlation of hydrogen density and temperature under different pressure [23].

Figure 3 shows some possible hydrogen storage options, including compression, liquefaction, hydrides, and adsorption. In physical storage, hydrogen can be stored through compression and liquefaction in the form of compressed, liquid, cryo-compressed, and slush hydrogen. In addition, chemical storage converts a broad range of materials to bind or react with hydrogen. These include hydrides (metal, interstitial metal, complex, and chemical hydrides), liquid organic hydrogen carriers (LOHC), reformed organic fuels, and hydrolysis. Among these, compression and metal hydrides are considered efficient methods for small- to medium-scale hydrogen storage [24]. Integrating large-scale energy storage into the electrical grid has the potential to solve grid problems, including the fluctuation of renewable energy [25] and storage of surplus energy. 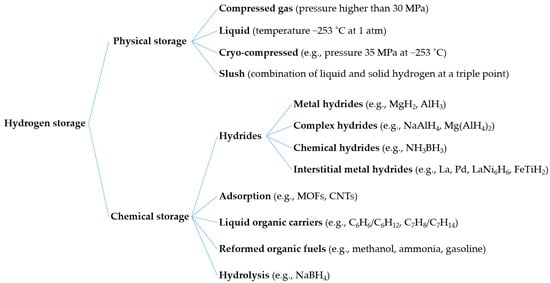