Pigments play a major role in many industries. Natural colors are usually much safer when compared to synthetic colors and may even possess some medicinal benefits. Synthetic colors are economical and can easily be produced compared to natural colors. In addition, raw plant materials for natural colors are limited and season dependent. Microorganisms provide an alternative source for natural colors and, among them, fungi provide a wide range of natural colorants that could easily be produced cheaply and with high yield. Along with pigment, some microbial strains are also capable of producing a number of mycotoxins. The commercial use of microbial pigments relies on the safety of colorants.

Natural pigments obtained from plants, animals and microorganisms are eco-friendly and have usually low or no toxicity [1][2]. The many disadvantages of using plants and animals prevent them from large-scale exploitation [3]. However, advantages of microbial pigments help to utilize their immense potential in various fields [4][5]. Even though the cost of microbial β-carotene production is several times more expensive, it can still compete with synthetic dyes in terms of it being natural and safe [6][7].

Microbial cells that produce color are referred to as microbial pigments producers [8]. They produce a wide range of colors (Figure 1) and are mostly water-soluble [9][10]. Natural pigments are mainly used as color additives or intensifiers; moreover, they are used as antioxidants and antibiotics (Figure 2). Due to indiscriminate use of synthetic colors and contrary reports on the safety of synthetic dyes, there is an important need to identify safe colorants from natural pigments. Microbial pigments have several advantages, viz., yield, cost efficiency, stability and ease of downstream processing compared to pigments from plant or animal origins [11][12]. 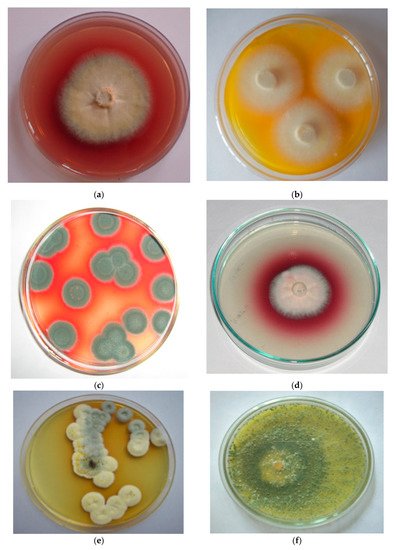 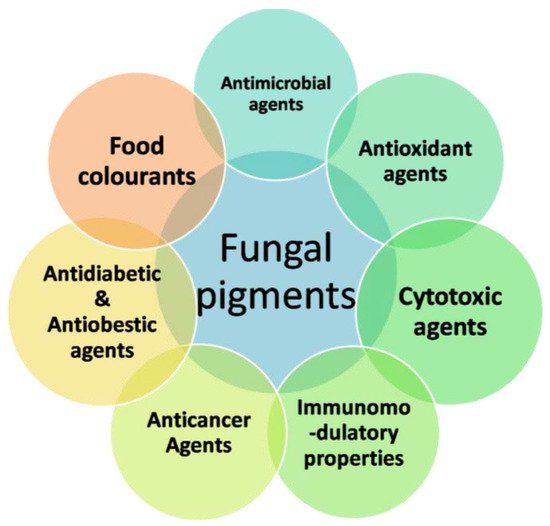 Figure 2. Applications of fungal pigments in the food industry.

Among pigment-producing microbes, fungi produce a wide range of water-soluble bio-pigments that have a variety of functions. Pigments extracted from fungi that are isolated from soil have various industrial applications. Filamentous fungi, viz., Monascus, Aspergillus, Penicillium, Neurospora, Eurotium, Drechslera and Trichoderma [13][14][15] are potential producers of bio-pigments. The pigments include carotenoids, melanins, flavins, phenazines, quinones, monacins and indigo [16]. Hence, they are the subject of many studies.

Recently, fungal pigments have been used for textile dyes, food colorants, antimicrobial and anticancer applications. They are also natural without having undesirable effects on the environment. Many scientific researchers have proved that pigments from soil fungi are a safer alternative to synthetic colorants, and there is good scope for industrial application [17][18].

Most fungi produce pigments along with mycotoxins. The presence of mycotoxins in pigments restricts the application of pigments as an additive in the food industry [1][19]. The European Union and the United States prohibit the consumption of Monascus pigments that are produced along with citrinin toxin, which poses a challenge over its safe use [20]. In short, natural pigments are a potential source of colorants that are eco-friendly, biodegradable, antimicrobial and have antioxidant properties. Apart from food additives, they are also used in cosmetics, pharmaceuticals and drug applications [21] (Table 1).

Aspergillus carbonarius, an Ascomycota fungus of the family Aspergillaceae, is capable of producing a yellow-colored pigment in its biomass. It does not produce any antinutrients or mycotoxins [46]. It has been exploited for large-scale production of polygalacturonase and is capable of temperature tolerance by UV irradiation when grown in shake-flask cultures. During the growth phase, a yellow colored pigment is accumulated in its biomass and has the potential to be used as a food colorant [47].

Toxicity studies in both sexes of albino rats at acute and subacute doses of the pigment revealed that feeding of fungal biomass did not show any mortality in rats and there are no significant differences in food intake or organ and body weight. When comparing treated and untreated rats, hematological parameters, serum enzymes lactate dehydrogenase (LDH), alkaline phosphatase (ALP), alanine aminotransferase (ALT or ALAT) and cholesterol assay also remain normal [48].

Blakesleatrispora is a Zygomycetes fungus of the order Mucorales, family Choanephoraceae. It is capable of undergoing both sexual and asexual reproduction through the production of zygospores and sporangiospores. The fungus does not produce any toxic compounds; hence, it is of industrial interest as a source of β-carotene for commercial exploitation [49][50]. β-carotene from B. trispora was the first authorized microbial food colorant in the European Union. It is efficient and can achieve the highest yield of all trans β-carotene at the expense of other structurally related carotenoids [18]. The process production was improved over a number of years, producing carotenoid contents of up to 20% dry weight [51][52].

The safety assessment of β-carotene, derived from B. trispora, has revealed no genotoxicity or subacute toxicity for 4weeks [23][53]. A subchronic toxicity study of 90 days was performed with oral administration of F344.Rats of both sexes showed no adverse effects on their biological systems [24]. β-carotene derived from the B. trispora at a 5.0% dietary level, equivalent to 3127 mg/kg/day and 3362 mg/kg/day for male and female rats, caused no adverse effects. The findings revealed that the daily intake of synthetic β-carotene from B. trispora by human beings is a negligible toxicological hazard [54].

Chinese, as well as other East Asian people, have confirmed the safety of red yeast rice. The European Food Safety Authority (EFSA) and the United States excluded red yeast rice on the list of permissible food additives, due to complex secondary metabolites [58][59]. The toxigenic strain of Monascus purpureus is capable of producing nephrotoxic and hepatotoxic mycotoxin citrinin, which limits the wide application of the pigment [60].

For more than a thousand years, pigments produced by Monascus sp. were legally used as food colorants in South East Asia, even though they were demonstrated to have physiological effects. There are numerous toxicological data available on this Monascus red pigment.

A genetically modified industrial strain, M. purpureus SM001 isolated in China, is capable of producing pigment without citrinin, which is the best Monascus pigment producer.This results in the prolonged safety of Monascus-related products and their application [61].

Penicillium are Ascomycota fungi belonging to the order Eurotiales, family Trichocomaceae. They are capable of producing many pigments. Penicillium are ubiquitous saprophytic soil fungi, present wherever organic material is available. Several species are capable of producing highly toxic mycotoxins. Some species of the genus Penicillium are capable of producing antibiotics, while some other species are used in cheese making; however, pigment production by these fungi is less well known [34][62]. Patents contain information about acute oral toxicity in mice. A 90-day subchronic toxicological study found acute dermal irritation, acute eye irritation, antitumor activity, micronucleus test in mice, AMES test (Salmonella typhimurium reverse mutation assay) and an estimation of antibiotic activity, including results of estimation of five mycotoxins [63].

Penicillium purpurogenum is capable of producing an azaphilone-like pigment. It secretes a brick red pigment during growth, which generally diffuses into commonly used media. However, violet pigment (PP-V) and orange pigment (PP-O) were also reported by altering culture conditions [64]. The production of pigment from Penicillium is more efficient and profitable than any other microorganism. It secretes enzymes and pigments out of the cell and the secreted pigment is water-soluble and relatively stable; thus, it is easily purified [65].

Toxicity studies of P. purpurogenum DPUA 1275 on brine shrimp, Artemia salina, showed antimicrobial effects and absence of toxicity to go along with pigment production. It also does not produce any known mycotoxins and is nonpathogenic to humans. It is a potential strain for the production of food pigments [66]. Although many species of Penicillium are found to produce pigments, only a few toxicological studies have been conducted.

Penicillium europium, isolated from forest soil, is capable of producing a pinkish pigment by using longifolene as a sole carbon source. A toxicity study on albino rats revealed that the pigment had no toxic effect on rats. Synthesized pigments from P. europium could be used in food, feed and pharmaceutical industries. Apart from the food industry, it could be used for various industrial applications, viz., dyes for textile and non-textile substrates such as paper, leather, paints and cosmetics. Moreover, as it is non cytotoxic, the pigment could be a potential replacement for hazardous synthetic dyes [36][67].

Penicillium resticulosum is capable of producing red pigments. An evaluation of the subacute toxicity of oral exposure on the synthesized pigment on adult male and female mice for 28 days, using a pigment dose of up to 500 mg kg−1 body weight daily, had no effect on body weight, organ weight, or the activity of lactate dehydrogenase (LDH), alkaline phosphatase (ALP), alanine aminotransferase (ALT or ALAT) enzymes or blood urea nitrogen (BUN) levels. However, mice taking the pigment over 500 mg·kg−1 body weight daily showed fatty degeneration and mild necrosis of liver cells, indicating that doses under 500 mg·kg−1 body weight were safe for daily consumption [37][68].