Froth flotation is an important operation for the recovery of valuable minerals in the mining industry. The essence of flotation processes lies in the interactions between particles and bubbles, which can be categorized into three successive sub-processes which are bubble-particle collision, attachment and detachment. These three sub-processes determine the overall performance of flotation processes for treating a particular ore.

There are limitations of flotation operation in treating particles of different sizes [1][2]. This size limitation can be varied for different type of ores and flotation works well for particles of base metal ores in the range 20 to 150 μm in diameter [3]. Recovery of fine and coarse particles declines progressively and underlying reasons are different depending particle size [4].

Fine particles with small inertia will more likely follow streamline and therefore have lower chance of colliding with a bubble [5][6]. Though this is not a problem for coarse particle flotation, coarse particles with higher inertia would more likely detach with modest disturbances from surrounding liquid motion [7]. Therefore, studying interactions between particles and bubbles are fundamental to improve flotation performance. It is unavoidable that fine particles are produced in the grinding processes for the beneficiation of minerals [8]. Moreover, it is desirable to treat coarse particles using flotation for the early rejection of gangue as large amount of energy can be saved in the comminution processes [9]. It is highly necessary for studying particle-bubble interactions under the effects of turbulent flows as they are limiting factors in determining flotation performance [10][11].

Studies have been directed towards expanding size limit [12][13] and manipulating particle-bubble capture [14]. Studying particle-bubble interactions in turbulence is key to expand size limit and improve flotation performance. We have done a systematic endeavor to understand the effects of turbulence, especially on particle-bubble collision and particle detachment. Critical literature reviews on separate sub-processes have been presented on particle-bubble collisions [15][16], attachment [17][18][19] and detachment [20]. It is desirable to combine these three sub-processes together and consider the effects of turbulence on the flotation process as a whole. The effects of turbulence on the particle-bubble interactions in general is considered to be a stochastic process [21]. It can be attributed to the dynamic interactions between particles or bubbles with the turbulent eddies in flotation environment. On one side, hydrodynamics in flotation machines need to be characterized [22], and on the other side, how turbulence control sub-processes in flotation machines should be examined [11]. In this way, hydrodynamics in flotation machines can be optimized to improve flotation performance [22]. Though some classical work in old days have been cited, we aim to collect literature in this century.

2.1. Effects of Turbulence on Collision 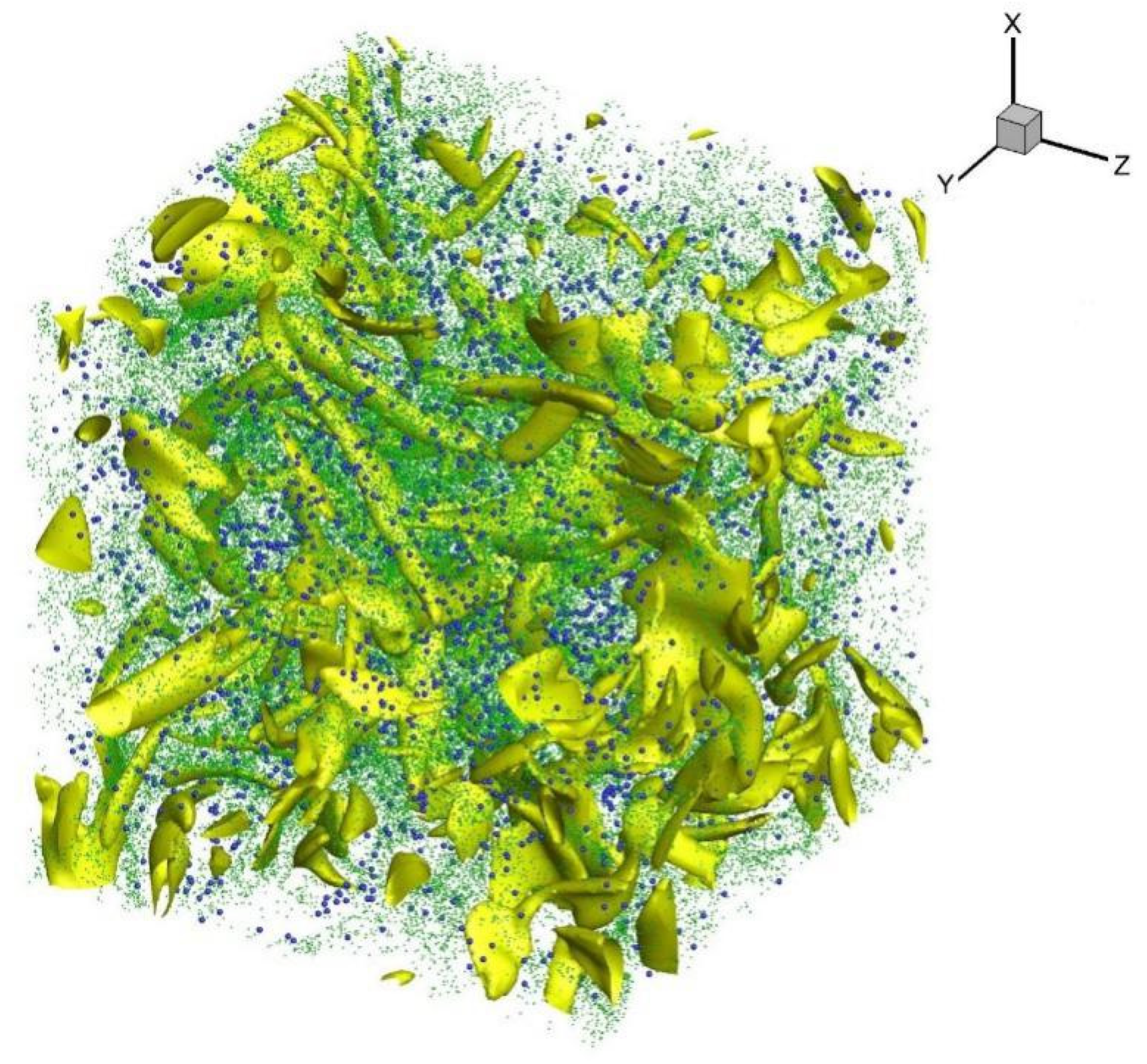 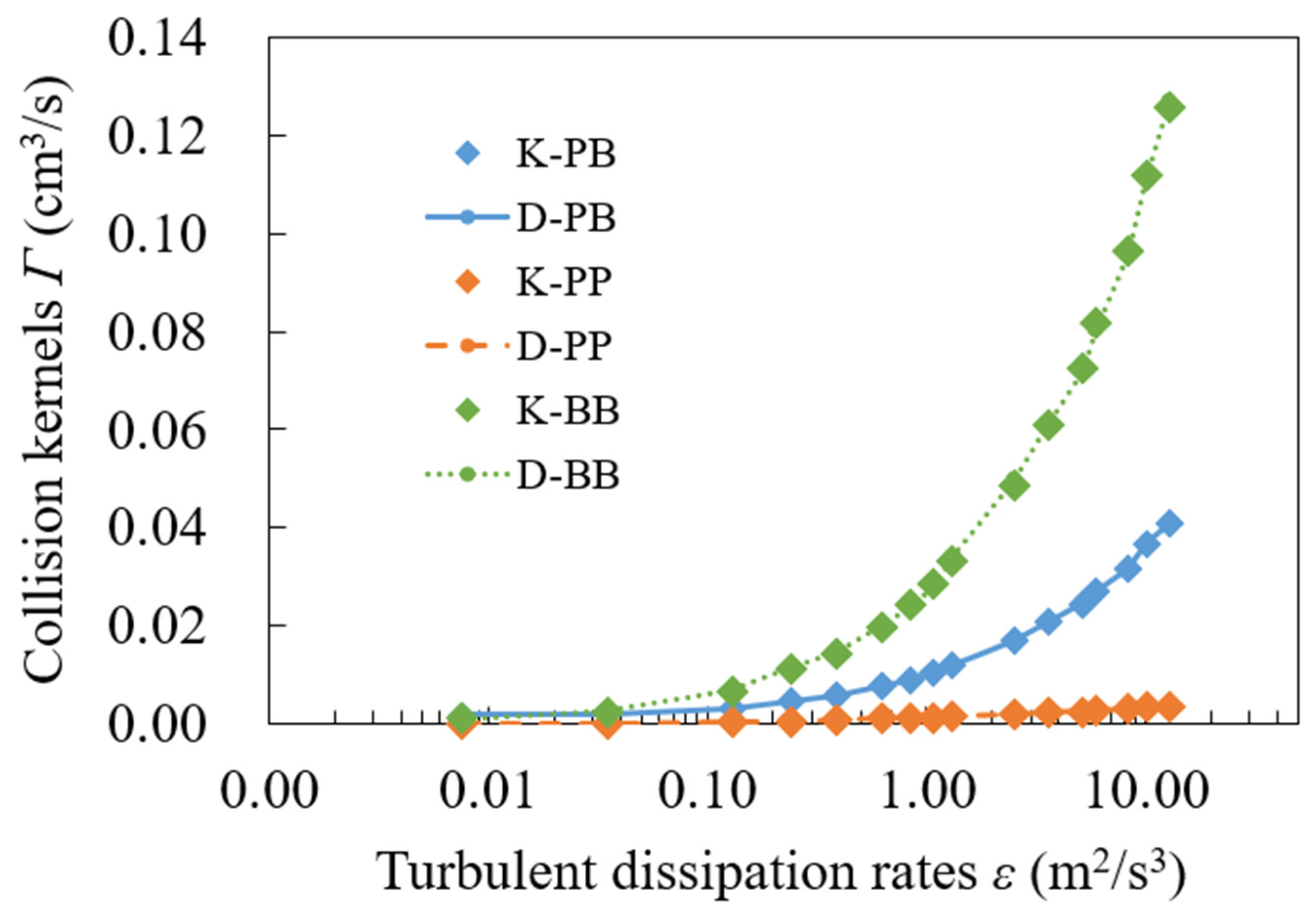 Figure 2. The collision kernels as a function of the turbulent energy dissipation rate [32].
Particles and bubbles were considered to be point particles in the above simulations. This will not hold for higher turbulent flows where bubbles and particles will be larger than small turbulent structures. The model was further improved by replacing point-particle model with particle-resolved simulations [34][35]. The dynamic collision kernels and kinematic collision kernels increased with turbulent dissipation rate. This observation was identical to our previous simulations using point-particle method. It has to be mentioned that these simulations considered turbulence as homogeneous and isotropic, whereas in real flotation machines, turbulence can be much more complicated. Direct numerical simulations of real flotation machines have not been achieved yet. Moreover, particle-resolved DNS consumes enormous computational cost. Though it can fully represent interactions between turbulent structures and dispersed particles or bubbles, the simulation domain is only dozens of millimetres which is anything but close to real flotation machines.

2.2. Effects of Turbulence on Attachment

Particle-bubble attachment is characterised by three elementary steps and they are thinning of intervening liquid film to a critical thickness, rupture of critical film and formation of a stable wetting perimeter with the expansion of three-phase contact [18]. Induction time was defined as the time required for above whole process to occur [36], whereas, Albijanic et al. [17] considered induction time as the time of thinning intervening liquid film to a critical thickness. Though there is disagreement on the definition of induction time, it is widely accepted that particle-bubble attachment occurs only when contact time is longer than the induction time. Major parameters affecting particle-bubble attachment are solution chemistry and surfactants, surface chemistry of minerals, and surface forces [37]. The effects of turbulence on attachment process are overlooked or rarely discussed.

2.3. Effects of Turbulence on Detachment

A comprehensive literature review on the detachment of a particle from the surface of a bubble can be found in [20], where previous studies on the bubble-particle aggregate stability have been critically analysed. The effects of turbulence on the detachment of a particle from the surface of a bubble can be analysed in two perspectives, i.e., force and energy. Schulze [38][39] considered that rotating turbulent eddies interacted with the bubble-particle aggregate in a way that a particle would rotate on the surface of a bubble when the bubble-particle aggregate was trapped in a rotating eddy. The particle would detach when the centrifugal force originated from particle’s centrifugal movement is higher than attaching force. Mao and Yoon [40] considered this process from energy perspective and kinetic energy required for detachment to occur was provided by turbulent eddies. There are discrepancies in the sources of turbulent kinetic energy from turbulent structures of different scales [41]. It is noted that exponential distribution function was used in these models to describe particle detachment probability. Researchers seem to accept this without further interrogation and the rationale behind this still remains obscure.
To view the detachment of a freely moving particle-bubble aggregate in a turbulent flow, an experimental apparatus as depicted schematically in Figure 3 was designed, where the movement of aggregates were confined in a wall cavity. Large eddy simulation (LES) was used to simulate turbulent flow fields and turbulence was shown inhomogeneous inside the cavity [42]. For the first time, the hypothesis of particle’s centrifugal movement proposed by Schulze [43] was experimentally observed. By tracking the movement of a particle, the rotational speed could reach as high as 200 cycles per second in the rotating vortex, as is shown in Figure 4. A number of different detachment mechanisms were identified, including inertial detachment due to the rapid changes in bubble movement, or because of the oscillations of the bubble’s surface [44]. When a bubble was loaded with more than one particle, behaviour of attached particles could become more complicated [44]. It seems impossible to model precisely the series of events that take place in the detachment process, as the particle-bubble detachment in the turbulent field is a stochastic process. 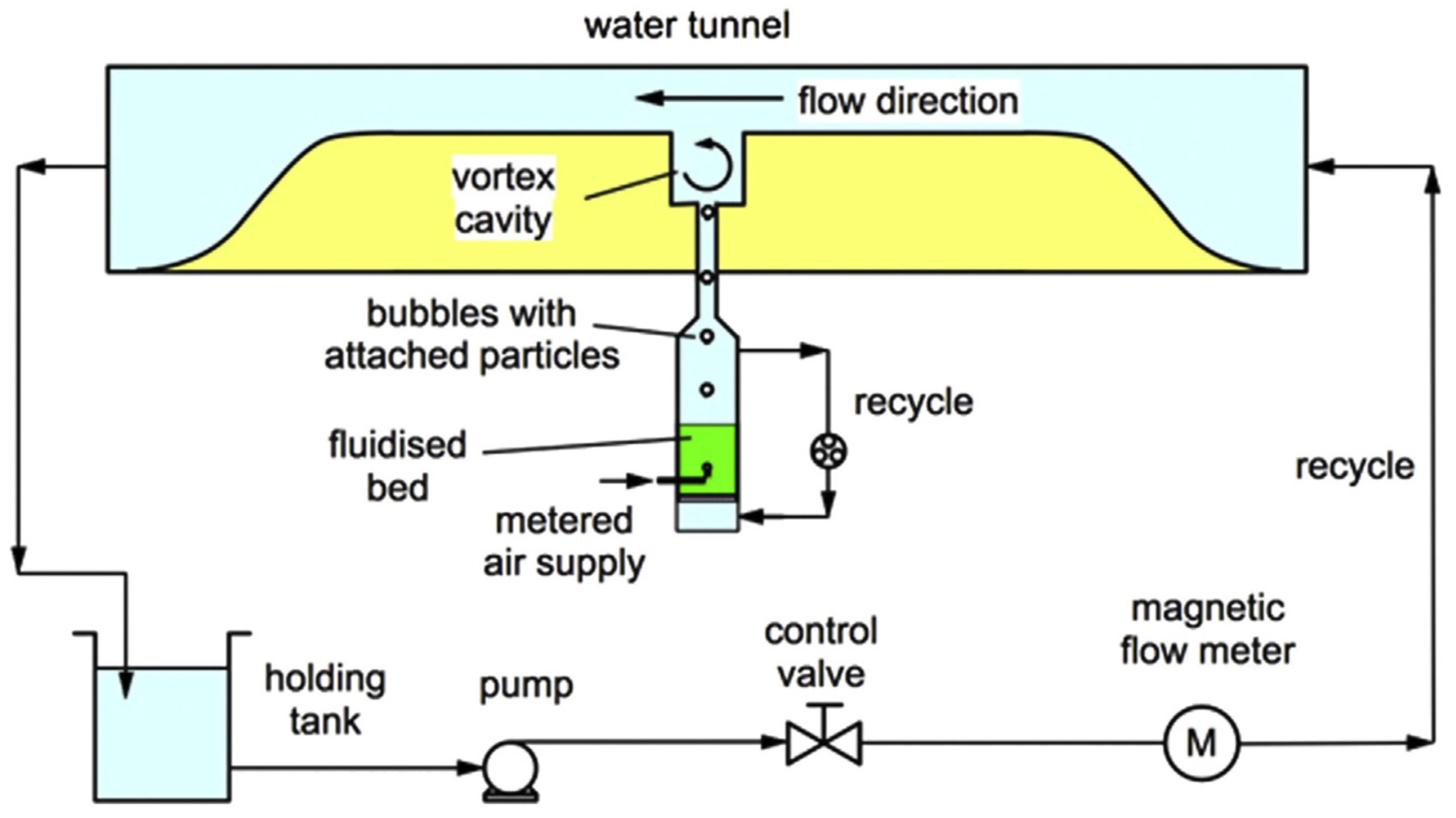 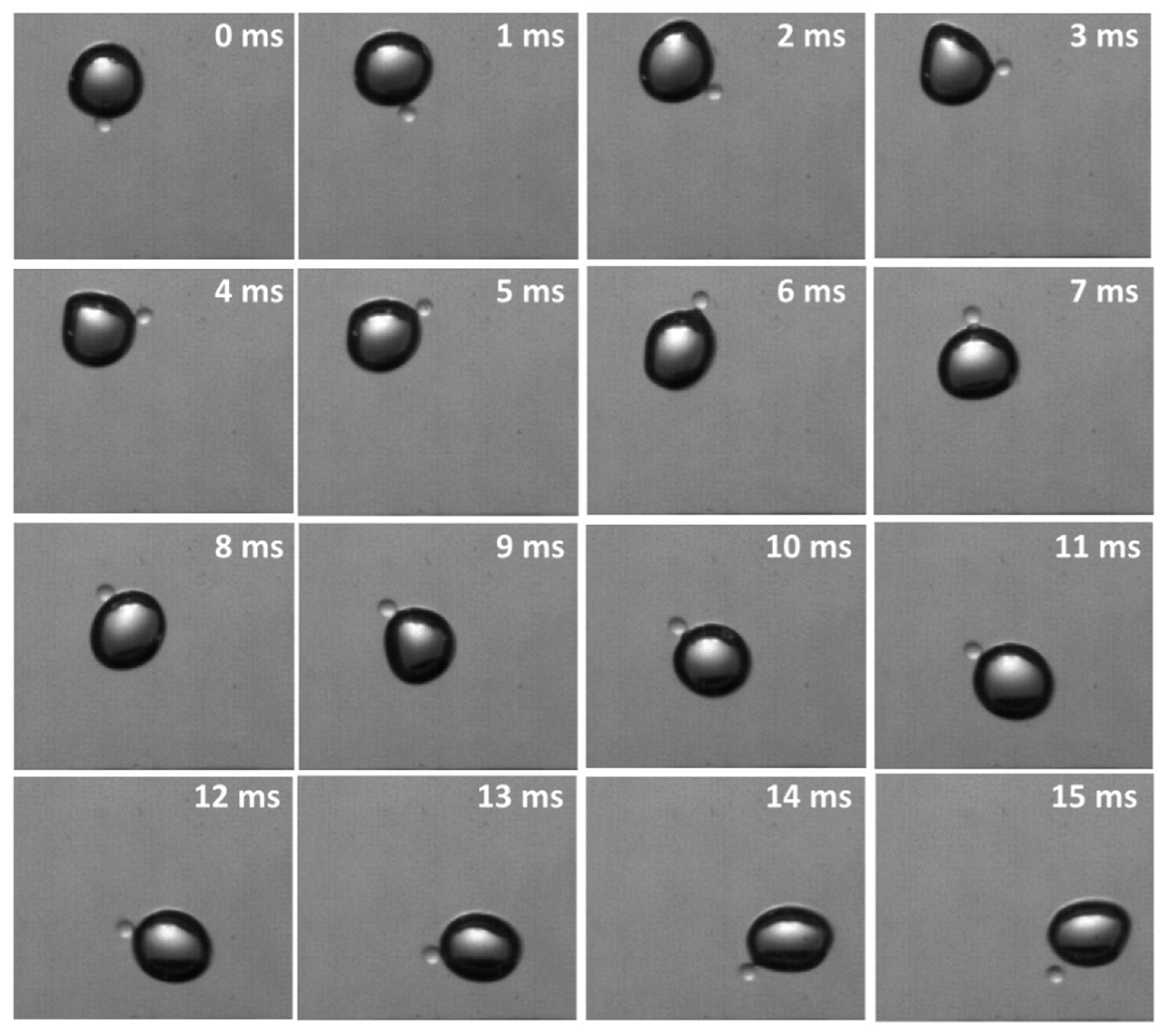 Figure 4. Time series of centrifugal movement of a particle on a bubble surface leading to detachment [46].