Dysregulation of gap junction intercellular communication (GJIC) is recognized as one of the key hallmarks for identifying non-genotoxic carcinogens (NGTxC). Currently, there is a demand for in vitro assays addressing the gap junction hallmark, which would have the potential to eventually become an integral part of an integrated approach to the testing and assessment (IATA) of NGTxC. The scrape loading-dye transfer (SL-DT) technique is a simple assay for the functional evaluation of GJIC in various in vitro cultured mammalian cells and represents an interesting candidate assay. Out of the various techniques for evaluating GJIC, the SL-DT assay has been used frequently to assess the effects of various chemicals on GJIC in toxicological and tumor promotion research.

Chemical carcinogens can be classified into three main groups [1][2]: (1) ultimate carcinogens (chemicals with a direct action with the capacity to induce cancer without a previous metabolic activation), (2) procarcinogens (chemicals that need to be activated by metabolic activation to become ultimate carcinogens) and (3) co-carcinogens (chemical substances that cannot induce cancer when administered alone but can enhance the carcinogenic effect of other substances). From a toxicological and regulatory perspective, chemical carcinogens can be classified according to their prevailing mechanism as genotoxic carcinogens (GTxC), which include mutagenic or genotoxic agents inducing mutations and DNA damage by “errors of DNA repair” during initiation and eventually also progression stage. In contrast, NGTxCs (i.e., non-genotoxic carcinogens) represent agents whose carcinogenic activity does not depend on DNA damage but on various mechanisms altering cellular behavior during tumor promotion and progression stage [3]. In addition to an initiating agent being mutagenic, while a promoting agent is not mutagenic, there are other differences between the action of GTxC versus NGTxC. An initiating agent after repeated exposure in a small dosage or a single large exposure leads to carcinogenesis, in contrast to a promoting agent, which is not carcinogenic alone or when not exceeding a “threshold” limit. The duration and regularity of exposure rather than its intensity appear to be the most critical factors, as well as the absence of “anti-promotors”. An effect of an initiating carcinogen is irreversible and additive, whereas an effect of a promoting agent is reversible at the early stages [3].

The alternative, using in vitro testing methods and batteries, has already been established for GTxC, and some assays developed into OECD Test Guidelines [4]. Still, there are no available in vitro test guidelines addressing specifically human-relevant NGTxC [5]. To address the current lack of alternative testing tools and approaches, an OECD expert group developed an integrated approach to the testing and assessment (IATA) of chemical NGTxC [5][6]. Refined and structured in accordance with recognized cancer hallmarks and mechanistic knowledge, this IATA identified 13 key cancer hallmarks of NGTxC: (1) receptor binding and activation, including also hormone-mediated processes, and CYP P450 induction, (2) cell proliferation and (3) transformation, (4) GJIC (i.e., gap junction intercellular communication), (5) oxidative stress induction, (6) immunosuppression/immune evasion, (7) gene expression and cell signaling pathways, (8) increased resistance to apoptotic cell death, (9) pathogenic angiogenesis and neoangiogenesis, (10) genetic instability, (11) cellular senescence/telomerase, (12) invasion and metastasis and (13) epigenetic mechanisms [5][6]. These hallmarks are related to the key events occurring in the early to mid to later stages of the carcinogenic process. Based on this IATA framework and following the proposed assay evaluation criteria [5], appropriate tests, primarily in vitro assays, shall be identified and prioritized for further development and (pre)validation. The selected assay(s) will be targeted for validation needed for test guidelines and regulatory use. The representative standardized or commonly used tests (if available) addressing the key cancer hallmarks have recently been summarized, including the current status regarding their use in hazard assessment, availability of the test guidelines and their readiness level and eventually their inclusion into the OECD Test Guidelines Programme [5]. Cell-to-cell communication mediated through gap junction channels, i.e., GJIC, represents one of these essential key mechanisms for which there are currently no test guidelines or standardized tests [5].

GJIC is a fundamental biological cellular process in multi-cellular metazoan organisms that allows an exchange of various soluble ions and aqueous molecules between adjacent cells, allowing them to integrate multiple signals and coordinate their behavior in the tissues [7][8]. GJIC is a key mechanism for maintaining tissue homeostasis, and its dysregulation has been long recognized as a hallmark of NGTxC [9][5][6][10][8][11]. The inclusion of GJIC into the IATA of chemical NGTxC [5] has, thus, provided an incentive for evaluation, prioritization and further development of in vitro assays capable of addressing this specific hallmark, particularly with respect to the lack of existing test guidelines or candidate assays for GJIC hazard assessment within the OECD Test Guidelines Programme.

Among various techniques developed for in vitro assessment of GJIC, the SL-DT (i.e., scrape loading-dye transfer) assay has probably been most frequently used in multiple studies of toxicant or carcinogen effects on GJIC. This in vitro assay is applicable to various cell types and cell lines. However, most of the published data focusing on the chemical effects on GJIC were generated using a rat liver epithelial cell line WB-F344. Nevertheless, such information, which would be highly relevant for further prioritization of in vitro assays suitable to address the GJIC hallmark in the IATA for NGTxC, has yet to be systematically mapped and summarized.

2. GJIC as the Key Mechanism in Tissue Homeostasis

GJIC is facilitated by gap junctions, plaque-like protein structures that form contiguous channels between the cells. Vertebrate gap junctions are built from connexins (Cxs), which are membrane proteins with a tetraspan topology of four interspersed transmembrane domains connecting the cytoplasmic N-terminal region through an extracellular (E1), cytoplasmic and another extracellular (E2) loop to the C-terminal part of the Cx molecule [7][12] (Figure 1). This structure is shared among the 20 rodent or 21 human Cx species encoded by the family of Gj/GJ genes. In addition to the gene names, a nomenclature of Cxs based on the molecular weight predicted by DNA sequencing is also commonly used. For example, Cx43 denotes connexins with a predicted molecular weight of 43 kDa, encoded by rodent/human genes Gja1/GJA1 [7]. In gap junction channels, six Cx protein units are organized into a hexameric hemichannel structure termed connexon.

Figure 1. Connexins, connexin hemichannels and gap junction channels. A connexin monomer consists of an intracellular N-terminus, C-terminus and cytoplasmic loop (CL); four transmembrane segments (TM1-4); and two extracellular loops (E1 and E2). Six connexin subunits form a connexon or hemichannel, two connexons/hemichannels form a gap junction channel and multiple channels are clustered into a gap junctional plaque. Different types of connexin can be combined within one hemichannel, channel or plaque. From [13] and according to information from [7][11].
A full gap junction channel is then formed by head-to-head docking of connexons from two adjacent cells. Expression of different Cx proteins is tissue- and cell type-specific, and different Cx species can be combined within a gap junction channel: homomeric connexons contain only one type of Cx, whereas heteromeric connexons are built from different Cx species [7]. Homotypic channels consist of two identical homomeric or heteromeric connexons, whereas heterotypic channels are created from two different homomeric or heteromeric connexons (Figure 1).
GJIC represents a universal and key function of all Cxs. Among the neighboring cells in the tissue, GJIC allows integration of various signals and signaling mechanisms, such as extracellular signals (e.g., hormones, cytokines and growth factors) transduced by various secondary messengers and signal transduction pathways (e.g., IP3, cAMP and kinases), as well as other regulatory molecules and metabolites produced intracellularly during cell responses to different stimuli, microenvironment or various conditions (cell–cell and cell–extracellular matrix interactions, nutrients, catabolites, pH and temperature) (Figure 2). In this way, GJIC plays a central role in integrating signaling mechanisms controlling gene expression and coordinating cell behavior across the solid tissues of a multicellular organism, where gap junctions join virtually all differentiated cells, except free-flowing cells [14]. 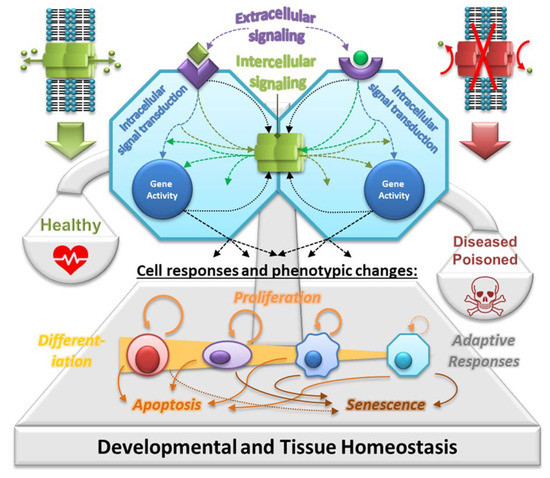 Figure 2. Gap junctions in homeostasis. Extracellular signals, such as growth factors, cytokines, hormones, toxicants, extracellular matrices and cell adhesion molecules, interact with receptor-dependent or receptor-independent targets, activating intracellular signal transduction pathways that induce gene transcription through activated transcription factors. These signals vary for each cell type: embryonic, adult stem, progenitor and terminally differentiated cells. Furthermore, these specific intracellular pathways operate under cascading systems that cross-communicate with each other in controlling the expression of genes that direct the proliferation, differentiation and apoptosis of cells within a tissue. These multiple intracellular signaling checkpoints are further modulated by intercellular signals traversing gap junctions—so-called gap junctional intercellular communication (GJIC). GJIC is crucial for integrating different signals and signaling mechanisms across the tissue, thus maintaining its homeostatic state under physiological conditions in a healthy organism. Abnormal interruption of the integrating signaling mechanism of GJIC by food-related and environmental toxins/toxicants will disrupt the normal homeostatic control of cell behavior. It can lead to an adverse outcome or a disease due to imbalanced proliferation, differentiation and/or apoptosis, which is typically observed, for example, in cancers and their tumor promotion and progression stage. Prepared according to information from [13][15][16].

3. Cell Lines and Methods for In Vitro GJIC Assessment

The assays suitable for evaluating GJIC have been extensively reviewed, including discussions on their principles, applicability, advantages and disadvantages [13][17][18][19]. These assays can be principally divided into three major groups based on the technical approaches used for estimating GJIC capacity. Namely, there are assays based on the measurements of (a) electrical conductance (electrical coupling), such as the double whole-cell voltage-clamp (DWCV) technique, (b) endogenous metabolite transfer (metabolic cooperation assays, MCs) or (c) a fluorescent dye transfer (DT). The latter group involves a variety of techniques, such as fluorescence recovery after photobleaching (FRAP), local activation of fluorescent molecular probe (LAMP), microinjection (MI), scrape loading (SL) or preloading (Pre) and parachute (Par) assays.

The most commonly used technique for in vitro GJIC assessment is the SL-DT assay [17]. The original SL-DT assay was reported by [20]. This technique uses a membrane-impermeable and gap junction-permeable fluorescent dye, typically Lucifer Yellow, introduced into adherent cells grown in a Petri dish by scraping with a rubber policeman or wooden probe [20]. The relatively invasive scraping step has been replaced by a clean cutting step with a sharp blade, such as a surgical scalpel blade. This later version was dubbed as the “scalpel loading-dye transfer” technique, the protocol was modified accordingly [21][22], and shown to be applicable to different types of cells (Figure 3). Nevertheless, the SL-DT assay has been recently further modified to increase the assay throughput and obtain more information from the GJIC assay by using multiple fluorophores and evaluating numerous parameters. The updated multiparametric SL-DT (mSL-DT) assay thus uses a standard microplate format and brightfield and fluorescence microscopic imaging of cellular staining done with a combination of three different fluorescent dyes (Lucifer Yellow LY for GJIC evaluation, Propidium Iodide for GJIC and viability evaluation, Hoechst 33342 for cell density evaluation) [23]. This setup allows assessing GJIC and additional parameters, such as cell density and viability, and applying HCA/HCS pipelines. This mSL-DT technique has also been used for various adherent cell types (Table 2) because its advantage is that no specialized cell model is needed. Both the SL-DT and mSL-DT can be documented using a standard widefield fluorescence microscope equipped with suitable Ex/Em filters and a digital camera. Additional specialized equipment, cell models or technical skills are not required. This method can eventually also be done ex vivo in the tissues of interest, such as liver tissue slices of rodents exposed ex vivo or in vivo [21][24]. 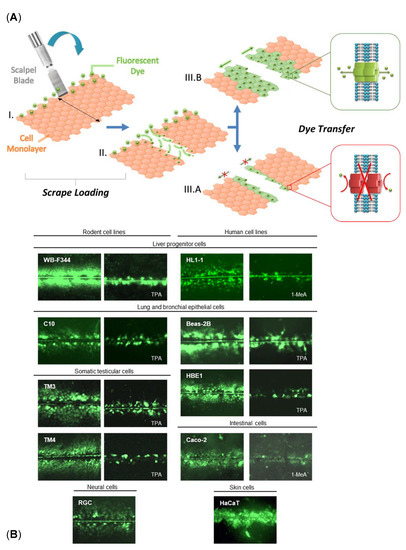