Espresso coffee (EC) is one of the most common coffee hot brews in the world, obtained from the percolation of hot water under pressure through compacted cakes of roasted ground coffee, where the energy of the water pressure is spent within the cake [1].
EC consumption is continually increasing internationally, being used not only as coffee brew but also in the preparation of other highly consumed coffee beverages such as cappuccino, Frappuccino, or flat white. According to the latest statistics from the International Coffee Organization (ICO), about 10 billion kg of coffee have been sold in 2020, so around 2.7 billion cups of coffee a day are consumed worldwide [2].
Nowadays, coffee brewed from coffee capsule systems is slowly replacing traditional brewing methods. Coffee capsules are small recipients containing previously roasted and ground coffee beans that are used in specially designed systems. These systems greatly increased and facilitated the consumption of homemade EC in the world [3].
EC brewing has been studied in various scientific experiments using different devices (e.g., espresso and capsule machines, etc.) and methodologies to optimize the beverage preparation process [4][5][6][7][8][9]. Indeed, coffee is a popular beverage with a unique sensory profile and also a complex source of hundreds of bioactive compounds, starting from green beans up to the final cup of coffee. The most studied bioactive compounds in coffee brews include caffeine, trigonelline, diterpenes, and polyphenols such as chlorogenic acids (Figure 1) [10][11][12][13][14][15]. 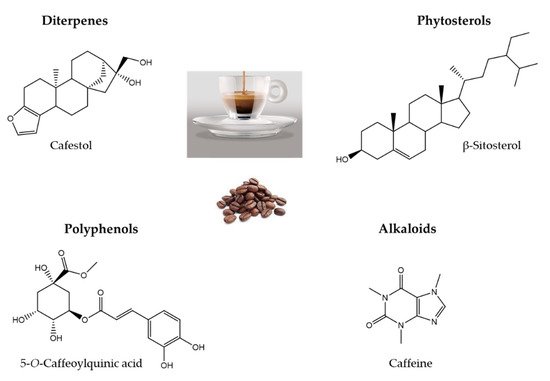 2. Analysis of Phytosterols in EC Samples

The determination of bioactive compounds in coffee and coffee brew is an important topic in food science research. However, among the different classes of compounds investigated in coffee, phytosterols have received little attention. In this study, 14 samples of EC of different origins were analyzed to assess their PS content. The analysis revealed the presence of 4 PS: β-sitosterol, campesterol, stigmasterol, and cycloartenol (Figure 2). 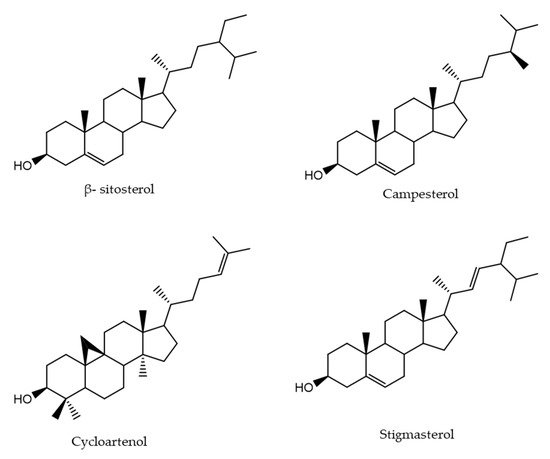 PS are steroidal compounds present in the membrane lipid bilayer of plant cells [19]. Although more than 200 PS structures have been reported, β-sitosterol, campesterol, and stigmasterol are the most occurring PS in foods representing, respectively, 65%, 30%, and 5% of total PS dietary intake [20]. The most studied sources of PS in common dietary patterns include vegetable oils, nuts, cereals, vegetables, and fruits [21][22]. The idea to study the PS content of EC comes from the high intake of this beverage all around the world, and the proportion of lipids inside EC (40–200 mg lipids/100 mL) [23]. Indeed, the lipids fraction of coffee beans has been analyzed in various studies reporting high levels of triacylglycerols (75% of total lipids) and a large proportion of the unsaponifiable fraction made mainly of diterpenes (19% of total lipids), sterols (5% of total lipids), and tocopherols (0.05% of total lipids) [17].
Few studies assessed the content of secondary metabolites from the unsaponifiable fraction of coffee brews focusing on diterpenes and tocopherols [24]. Diterpenes in coffee brew mainly refer to diterpene alcohols of the kaurene family with cafestol, kahweol, and 16-O-methylcafestol representing the principal compounds [25]. They principally occur in esterified forms with fatty acids and according to preparation conditions, their total content in EC can vary from 0.2–1.4 mg/25 mL for EC prepared from capsules [26] and 0.8–1.5 mg/25 mL for EC prepared from roasted coffee beans [27]. Despite their health benefits including anti-inflammatory, antioxidant, anti-angiogenic, and anti-carcinogenic properties, the interest of diterpenes in coffee brew comes from their LDL-cholesterol-elevating effects [28]. The effects of these single compounds suggested controversial impacts of coffee brew consumption on blood cholesterol levels, and consequently, the increasing of the risk of coronary heart disease (CHD). Indeed, some studies revealed that the occurrence of diterpenes varies according to coffee brews and preparation techniques. For example, diterpenes in boiled coffee Turkish coffee, and French-pressed coffee show the highest levels of diterpenes (1–2 mg/25 mL) while filtered coffee brew shows the lowest diterpenes content (≤0.2 mg/25 mL) [29][30]. Although some case–control studies have reported a positive association between coffee drinking and CHD, the majority of cohort studies conducted in different countries with high consumption of EC such as Italy [31], Sweden [32], Finland [33], or the USA [34] did not observe any association between coffee brew intake and CHD for women and men. More recently, Groni et al. (2015) conducted a prospective cohort study on 30,449 women and 12,800 men in Italy, after which, they concluded that the intake of more than two cups/day of Italian-style EC is not associated with plasma cholesterol changes (LDL, HDL, or total cholesterol) [35].
To our knowledge, among all the studies on the unsaponifiable fraction of coffee, the present research is the first to assess the PS levels in a coffee beverage. The assessment of PS in EC is important considering the potent blood LDL cholesterol-lowering properties of PS [36] and the high consumption of coffee beverage in the world. It is important to highlight that the aim of this study was not to compare the different coffee origins but to have a wider spectrum of the PS content in EC by analyzing coffee brews obtained from 14 different sources. The mean levels of β-sitosterol (0.1–0.5 mg/25 mL), campesterol (0.02–0.12 mg/25 mL), stigmasterol (0.03–0.12 mg/25 mL), and cycloartenol (0.01–0.05 mg/25 mL) in one cup of standard EC are reported in Figure 3. 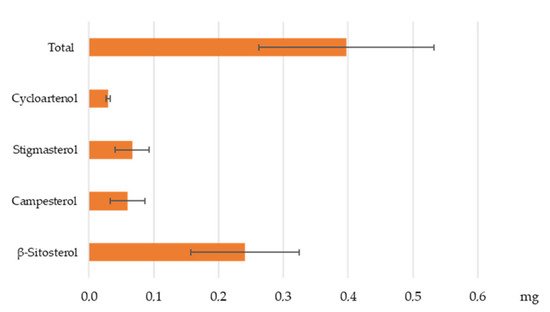 Figure 3. Mean levels of phytosterols (mg) in one cup of espresso coffee (25 mL). Results are expressed as mean ± standard deviation, with 14 biological replicates from 14 different samples (n = 14).
PS in coffee mostly belong to the family of 4-desmethylsterols, which are known to reduce LDL-blood cholesterol [37]. As reported in various analyses on coffee oil, β-sitosterol, campesterol, and stigmasterol are the most abundant PS in Arabica and Robusta coffee types [37][38]. Pacetti et al. [39] analyzed the unsaponifiable fraction of green coffee oil and observed various of PS including β-sitosterol, campesterol, citrostadienol, cycloartenol, Δ5-avenasterol, Δ7-avenasterol, 24-methylencycloartanol, and stigmasterol.
In this study, the four main PS in coffee were identified and quantified (β-sitosterol, campesterol, stigmasterol, and cycloartenol). Analyses performed in this study showed that the intake of one cup of EC (25 mL) according to coffee origin can provide between 0.2 mg and 0.7 mg of PS. However, the findings obtained do not suggest that the consumption of coffee brew can lower blood cholesterol. Indeed, according to Regulation (EU) No 432/2012 [40], the beneficial effect of PS is obtained from an intake ≥800 mg of PS/day, a quantity that cannot be obtained from normal coffee consumption.

This study reports for the first time the levels of PS in Italian-standard EC. HPLC analyses allowed the identification and quantification of four cholesterol-lowering compounds: β-sitosterol, campesterol, stigmasterol, and cycloartenol for a total level ranging between 0.2 and 0.7 mg/25 mL of brew. PS in EC could contrast the hypercholesterolemic effects of diterpenes report in the literature. However, further studies are still necessary to confirm this hypothesis. The methodology used can find applications in future experiments to assess more accurately the PS content of other coffee brews and determine how coffee preparation could affect PS levels in coffee.