Mitochondrial carriers play a fundamental role in cellular metabolism, connecting mitochondrial with cytosolic reactions. By transporting substrates across the inner membrane of mitochondria, they contribute to many processes that are central to cellular function. The genome of Saccharomyces cerevisiae encodes 35 members of the mitochondrial carrier family, most of which have been functionally characterized.

Mitochondria are subcellular organelles involved in different pathways. In addition to supplying energy, mitochondria contribute to many processes that are central to cellular function and that require the exchange of metabolites between the cytosol and the mitochondrial matrix. These organelles are surrounded by a double-membrane system consisting of an outer mitochondrial membrane (OMM) that surrounds the inner membrane (IMM); the two membranes are separated by an intermembrane space. Numerous transport processes occur between the two mitochondrial membranes. The OMM contains large pores (porins), which are large enough to allow the passage of ions and molecules as large as a small protein. The IMM is highly impermeable and, therefore, is characterized by the presence of specific carrier proteins which transport metabolites inside the mitochondria. These proteins, which are encoded by nuclear DNA, play a fundamental role in cellular metabolism since they connect the intra-mitochondrial reactions with the extra-mitochondrial (cytosolic) ones.
Mitochondrial carriers are widespread in all eukaryotes and considerable research has been conducted on characterizing the members of the mitochondrial carrier family (MCF) in yeast, mammals, plant, and insects. In particular, in Saccharomyces cerevisiae, 35 members of the MCF have been identified and, in large part, functionally characterized ( Table 1 ).

With a single exception, these proteins are found in the inner membranes of mitochondria. By transporting several substrates across this membrane, they are indirectly involved in many biochemical processes, such oxidative phosphorylation (OXPHOS) ( Figure 1 ), the transfer of reducing equivalents ( Figure 2 ), the transport of Krebs cycle intermediates ( Figure 3 ), fatty acid metabolism ( Figure 4 ), gluconeogenesis (Figure 5), and amino acid synthesis ( Figure 6 ). 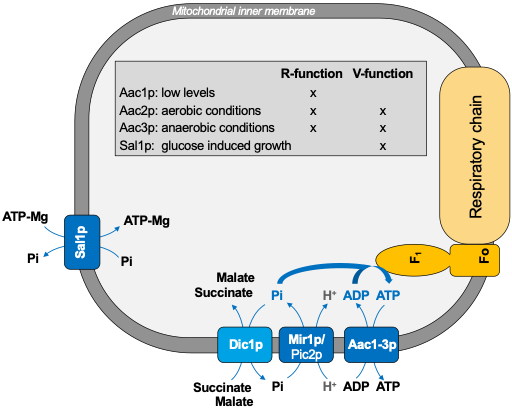 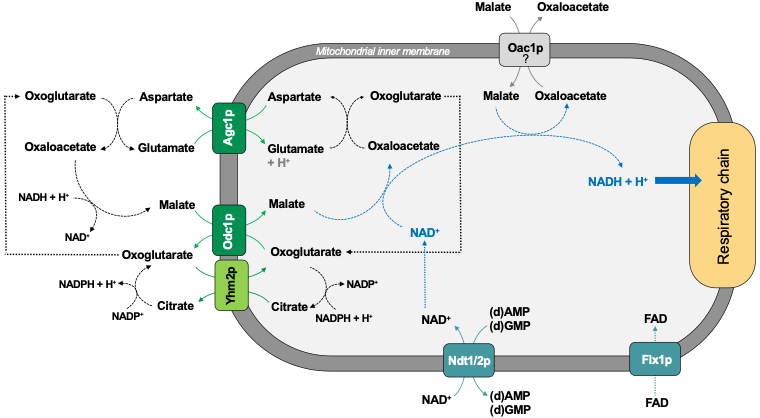 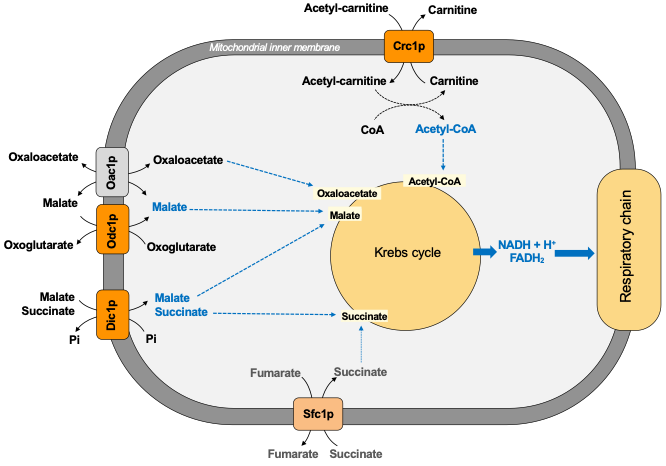 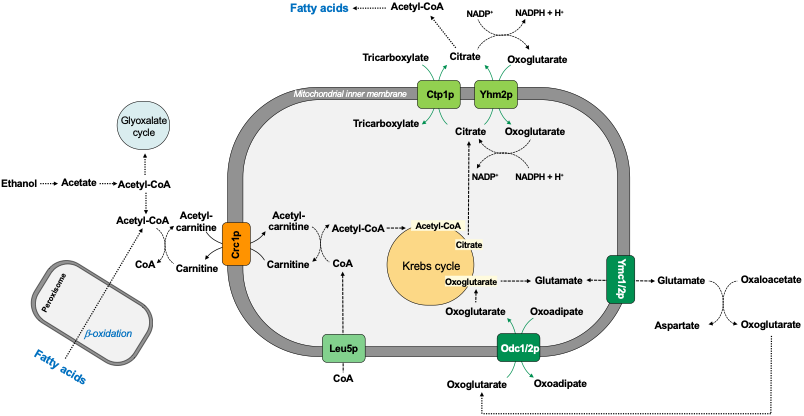 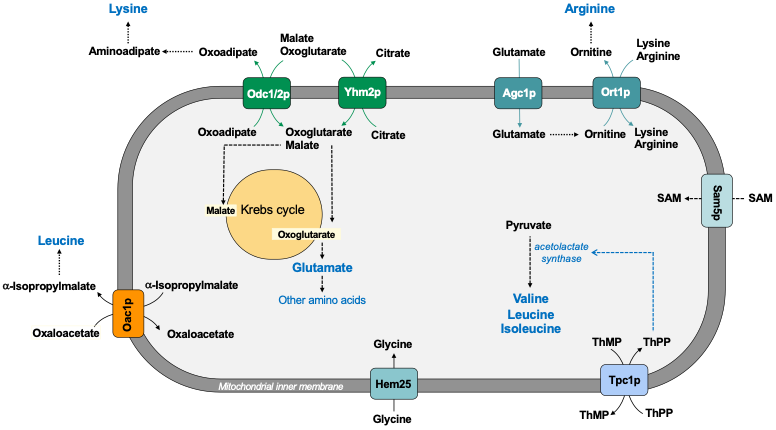 Despite the considerable progress made in the last years in characterizing mitochondrial carriers from Saccharomyces cerevisiae, many aspects related to their role in metabolic pathways connecting mitochondrial and cytosolic reactions remain to be ascertained. In fact, the function of most transport proteins has been determined by expressing the gene in Escherichia coli or Saccharomyces cerevisiae, reconstituting protein into liposomes and testing its transport activity in the presence of substrates selected on the basis of genetic, biochemical, and phylogenetic considerations​. ​ ​
All carrier proteins which are involved in the same metabolic pathway should be orchestrated to adequately channel substrates toward the formation of desired products.​ Interestingly, the same mitochondrial carrier can transport different substrates (as suggested by experiments of substrate specificity in reconstituted liposomes) depending on the metabolic pathway in which it is involved.​ ​

Taken together, all this evidence suggests that mitochondrial carriers play a key role in the adaptation of yeast metabolism in response to specific growth conditions. Their involvement in metabolic pathways can provide new insights not only on the physiological roles of mitochondrial carriers in yeast cell metabolism but also in the understanding of molecular basis of human diseases.​ ​However, many questions remain to be addressed. In fact, some carrier proteins possess specific isoforms which possess different physiological roles. At the same time, different carrier proteins can transport the same substrates depending on metabolic condition of the cell. What, when, and how much are these proteins expressed?​ ​Are these proteins distributed in the mitochondrial inner membrane, or are they localized to create specific carrier clusters associated to specific metabolic pathways?​ Is there a physical interaction between carrier proteins contributing to the same biochemical process​? ​How are these proteins orchestrated to channel substrates to common pathways​? ​These ​unexplored aspects are very intriguing, and more research is required to highlight new findings in the field of mitochondrial carrier biology in the yeast​ ​Saccharomyces cerevisiae​.