Wolf population management should be guided by knowledge on abundance, demographic and genetic structure, and reproduction. Such information is relevant both locally and internationally if populations of protected species inhabit areas shared by several states.

In modern human-dominated landscapes where large carnivores coexist with people in relatively close proximity, their future conservation as key wildlife components depends on sharing the same landscape, which requires public understanding and supportive participation in terms of sustainable management, protective legislation, and damage prevention or compensation [1][2][3][4]. Historically, gray wolves (Canis lupus L., 1758), regarded as competitors for game, pests in livestock breeding, and threats to public safety, have been persecuted and even locally eradicated throughout Europe and North America. However, their recolonization in previously inhabited areas and their population growth have been achieved by conservation efforts such as legal protection favoring natural population re-establishment and sometimes deliberate translocation of individuals [5][6][7][8][9][10][11][12]. Meanwhile, conflicts with human interests have also emerged or intensified [13][14][15][16], bringing serious challenges in the eyes of the general public for the protection of this species and wildlife conservation in general [17]. Today, wolves are hunted mainly to decrease real or perceived threats to human safety and the livestock industry, preserve wild game species, or control the spread of diseases. Sometimes, wolves are hunted for sport or to obtain trophies. Human attitudes and perception can have a considerable effect on the intensity of wolf persecution [18][19], and reasons for wolf hunting are not always sufficiently justified in following sustainable species management.
The so-called Baltic population of gray wolves, consisting of ca. 3600 individuals and inhabiting territories of Estonia, Latvia, Lithuania, Belarus, northeastern Poland, northern Ukraine, and the western regions of the Russian Federation, is considered to be one of the most viable wolf populations in Europe [17][20][21]. In previous studies, the carrying capacities for Latvian and Lithuanian wolf subpopulations were estimated [22][23]. According to these studies, the assessed carrying capacity for wolves in Latvia ranged between 1066 and 1092 individuals [22]. In Latvia, despite persecution to various extents, the species has never been totally exterminated unlike in other parts of Europe, although the wolf number was reduced close to extinction twice: before WWII and then in the 1960s [24][25]. Before Latvia became a European Union member state in 2004, wolves in Latvia were legally harvested or culled all year round. After joining the EU, a closed season and an annual culling quota were introduced in compliance with the Habitat Directive of the European Council [26]. The species management plan [25] does not prescribe any target size for wolf abundance in Latvia. Hence, the goal is to maintain a favorable status according to the criteria set by the EU Habitat Directive, including the viability of the species within its natural habitat, nondecreasing distribution range, and availability of habitats [17][21][26]. To ensure a favorable population status and species conservation, especially in the situation where restricted harvesting is allowed, the population management system should be adapted to any changes in the population status.

2. Closer to Carrying Capacity: Analysis of the Internal Demographic Structure Associated with the Management and Density Dependence of a Controlled Wolf Population in Latvia

More than a decade has passed since adaptive management of wolves in the Baltic countries was introduced and applied. Unlike in Estonia and Lithuania, the target population size in Latvia has not been set and maintained [21][25], thus theoretically allowing population growth. The official wolf abundance estimates by the State Forest Service (SFS) and our virtual population analysis indicated that the Latvian wolf subpopulation increased during the last two decades despite continuous culling. Considerable population growth has been evident for other species of large mammals as well, including prey species [27][28][29]. The number of reported livestock depredation cases during the last 10 years has slightly increased as well, albeit without statistical significance [27]. A reliable wolf census has not been continuously applied; hence, the actual wolf abundance in Latvia remains unknown, and the extent of the population growth has to be interpreted with caution. Several factors can contribute to local population increases despite the actual removal of individuals. For example, the harvested population is still expected to grow if the harvest is below the limit of sustainable yield, determined by the growth rate and the carrying capacity, or if under specific circumstances, the harvest replaces natural mortality in a way that reduces the overall mortality [30]. Apparent growth may have resulted from immigration from neighboring countries [20][31][32].
Continuous data on wolf abundance and harvesting from 1958 until 2004 allowed to evaluate the carrying capacity for the Latvian wolf subpopulation as a parameter in an autoregressive model [22], which can now be compared with the current abundance estimates. According to SFS data presented in this study, the predicted value of the carrying capacity (1066–1092 individuals [22]) was exceeded in 2012. Afterward, apparent stability in the estimated wolf abundance was observed, which is to be expected due to density regulation processes [30]. Another potential indicator, which may have resulted from a negative density dependence, was the observed decrease in litter size in 2011–2013. Plausible alternative explanations, however, are to be considered.
First, both the abundance estimates and the culling quotas are interdependent. The quota is decided according to the official abundance estimate by the SFS, but the results of virtual population analysis depend on the number of culled individuals per age class. Hence, the abundance estimates are proportional to the culling quota which, in 2012, was raised to 250 individuals, but has since been kept between 250 and 300 individuals (Figure 1). Therefore, apparent trend in the abundance estimates may have resulted from variation in the culling quotas. Additional information, such as culling success per unit of effort, would reflect actual density [33]; however, in our case, data on hunters’ efforts dedicated to wolf culling were lacking. 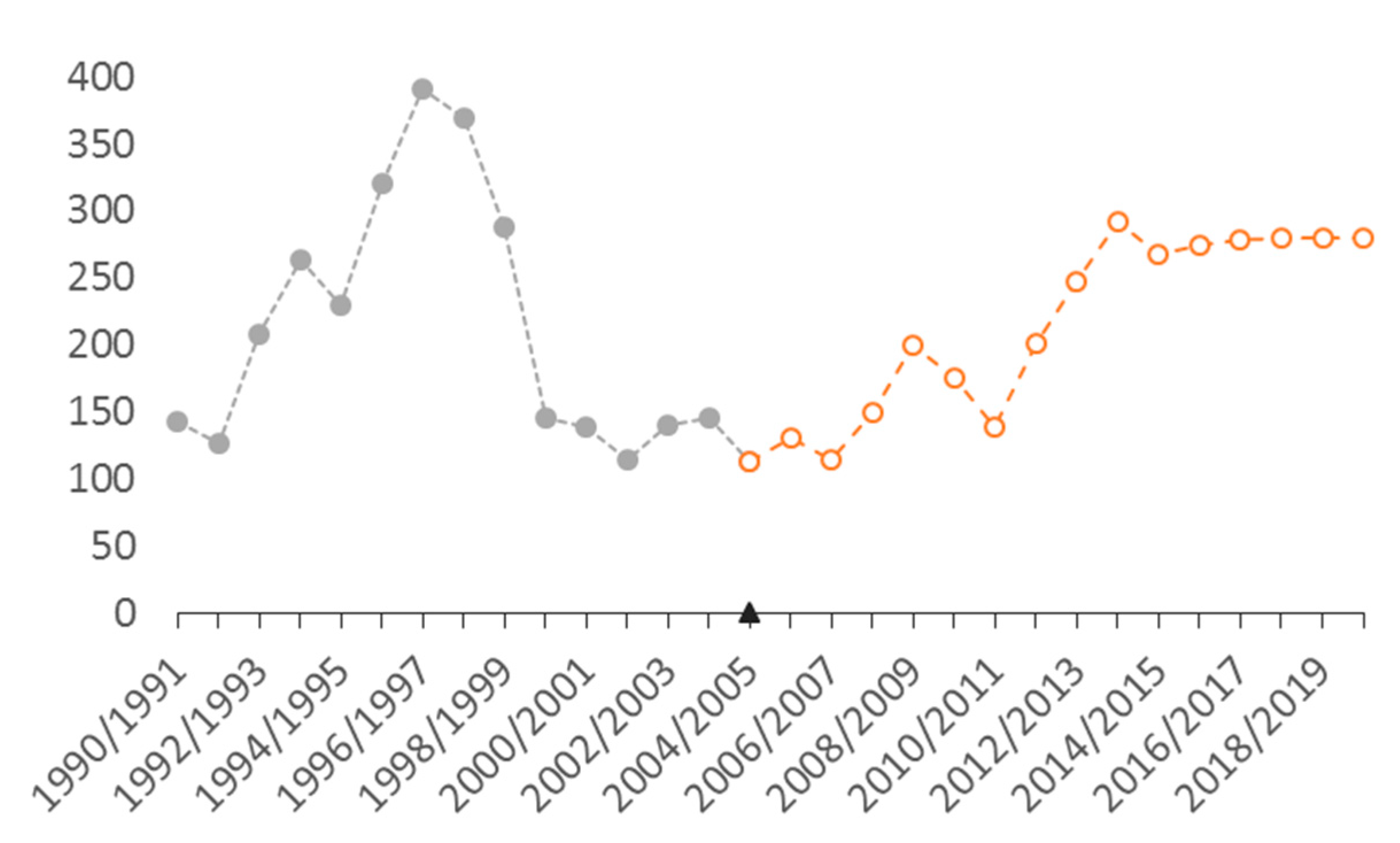 Figure 1. The number of culled wolves per hunting season in Latvia (SFS data [27]). Different markers and coloring signify periods of different management (see details in the text); the point of transition is marked by a triangle.
Second, the autoregressive approach in evaluating the parameters of a mechanistic model that describes population dynamics [22][23] is attributable to a carrying capacity, which results from a combination of ecological and socioeconomic limitations on the potential abundance. Due to the prevailing attitude of the society that the wolf population in Latvia has to be regulated [34][35], it is not expected to grow beyond socially acceptable limits up to its ecological carrying capacity, determined by the availability of prey, shelter, and other resources. Moreover, as suggested by Ozoliņš et al. [21][29], greater prey abundance, deliberate and nondeliberate human interference, and other factors may have contributed to an increase in the carrying capacity of wolves in Latvia, but the value of the carrying capacity used in this study was originally estimated as a constant [22][23]. Therefore, in light of recent findings, additional hypotheses, and a greater dataset, the carrying capacity of the Latvian wolf subpopulation must be re-evaluated. Such knowledge is relevant for planning and implementing sustainable management of wolves (and large carnivores in general).
Third, a smaller litter size may result from optimal population growth with lower reproductive input or limited prey resources per pack [18][36][37]. From 2009 until 2012, when lower fecundity was observed, the estimated number of roe deer Capreolus capreolus in Latvia dropped from ca. 240,000 individuals to ca. 137,000 individuals [27]. Other prey species, however, such as wild boar Sus scrofa, did not exhibit a decline and would have been available for a dietary shift [38][39]. Moreover, younger females tend to have smaller litters [40][41][42]. Therefore, observations reported in this study are currently insufficient for drawing a valid conclusion regarding the relationship between wolf abundance and the carrying capacity in Latvia.

2.2. Implications for Conservation and Management

The so-called Baltic population of wolves is one of the most viable wolf populations in Europe [17]. Therefore, its role in sustaining the genetic diversity of this species at a European scale is significant. Nevertheless, the management approaches in each of the countries that share the Baltic wolf population are different, ranging from strict protection in Poland to intensive exploitation in Russia [21]. International cooperation and awareness with regard to species conservation status and management goals at a local scale are needed.
Species conservation requires not only numerically and spatially sustainable population, but also the social, behavioral, and genetic integrity of the population to ensure species long-term existence and the ability to perform its ecological functions. Therefore, to better understand the responses of the Latvian wolf subpopulation to current management actions and its long-term impact, an investigation also has to be conducted beyond monitoring wolf density and reproduction rates. As immigration from the east due to the present lack of physical barriers along the EU–Russian border may be one of the reasons for the Latvian wolf subpopulation showing an increasing trend despite the current harvest rate, its possible sink effect within the wolf metapopulation network of the Baltic region should be assessed in future studies. Genetic samples are now routinely obtained from culled individuals, which will allow an estimation of genetic diversity and the number of packs, as well as a determination of diachronic interindividual kinship, dispersal patterns, and potential relationships with neighboring wolf populations [25].
However, wolves, as wild carnivores living close to humans in populated landscapes, are associated with real or perceived threats to the safety of the society as well as economic loss due to livestock depredation and availability of wild game species to the hunters. In areas where the wolf conservation status permits, their lethal control has been applied to mitigate these problems. Nevertheless, we have argued that culling may stimulate wolf breeding and litter sizes. Moreover, inappropriately motivated and executed culling may fail in its goal to reduce livestock depredation damages [43]. In a scientific sense, legal culling can be appreciated for providing the researchers with valuable and reliable information (e.g., data on age structure and reproductive status), which are difficult to obtain otherwise. Ultimately, its effectiveness in sustainable wolf management must be continuously evaluated.

Our results indicate that during the last two decades, the Latvian wolf subpopulation has been under moderate hunting pressure, which preserved the stable sex ratio (despite unequal culling mortality) and adult age structure of the population and allowed its growth due to high breeding rates and litter sizes (the role of immigration, however, remains unknown). The apparent stabilization in recent population dynamics in relation to the previously estimated carrying capacity could not be definitively associated with the negative effects of density dependence, and reaching the natural limitations of wolf abundance in Latvia due to competing interests is considered unrealistic. The population status should be evaluated on the basis of not only abundance but also data on population structure obtained using various methods. In this respect, legal culling provides valuable and reliable information; therefore, its coupling with species monitoring efforts is advisable.