In the ecological future of the planet, intelligent agriculture relies on CPS and IoT to free up human resources and increase production efficiency. Due to the growing number of connected IoT devices, the maximum scalability capacity, and available computing power of the existing architectural frameworks will be reached. This necessitates finding a solution that meets the continuously growing demands in smart farming. Cloud-based IoT solutions are achieving increasingly high popularity. The aim of this study was to design a scalable cloud-based architecture for a smart livestock monitoring system following Agile methodology and featuring environmental monitoring, health, growth, behaviour, reproduction, emotional state, and stress levels of animals. The AWS services used, and their specific tasks related to the proposed architecture are explained in detail. A stress test was performed to prove the data ingesting and processing capability of the proposed architecture. Experimental results proved that the proposed architecture using AWS automated scaling mechanisms and IoT devices are fully capable of processing the growing amount of data, which in turn allow for meeting the required needs of the constantly expanding number of CPS systems.

2. Current Insight on IoT Architecture Based on AWS for Smart Livestock

The proposed architecture designed for smart livestock farming is shown in Figure 2. It was built with AWS serverless services and contains several groups of services such as compute, storage, databases, analytics, network, mobile, management, developer, IoT, security, enterprise application, and others. The necessary services for creating a scalable and robust livestock monitoring system were grouped in frames. These were: AWS IoT Core, Lambdas, Data Recognition, Streaming Data, Data Lake, Data Stores, Data Processing, Machine Learning, Notifications, Analytics, Logging, and User Identities. The frames were developed to satisfy the required functionalities described in the Materials and Methods section as Stage 2. The designed architecture complies with all pillars of the well-designed architecture described in the Materials and Methods section on Stage 3. 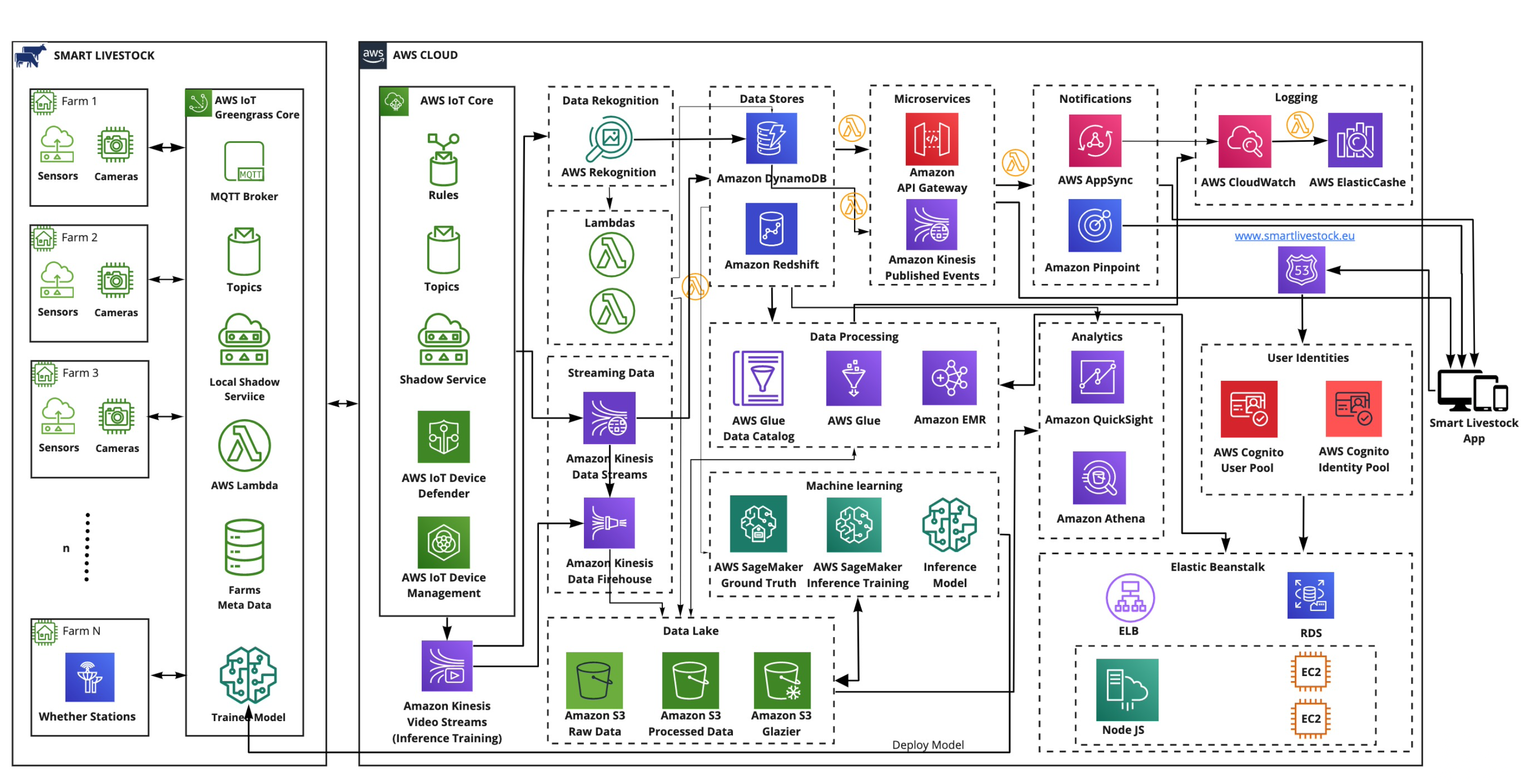 The AWS IoT core consists of five services that maintain the needs of all IoT devices, connect to AWS cloud, manage devices, update over-the-air (OTA) [24], and secure the IoT devices. It uses the TLS communication protocol to encrypt all communication [25]. Services in this framework are rules, topics, shadow service, AWS IoT device defender, and AWS IoT device management.
The Rules enable the IoT devices developed for smart livestock to interact with AWS services.
Some of the rules used in the system are:

–
Filtering data coming from IoT devices;
–
Separation and recording of data according to their type in various kinds of databases;
–
Sending notifications to users in certain circumstances (for example, occurrence of abnormal events in the monitoring process);
–
Real-time processing of messages coming from a large number of IoT devices from different locations;
–
Setting alarms to notify the user when reaching predefined limits of certain parameters (for example, reaching a critical battery level of IoT devices);
–
Send the data from a Message Queuing Telemetry Transport (MQTT) message to a machine learning frame to make predictions based on the ML model;
–
Send message data to an AWS IoT analytics channel; and
–
Send data to a web application.

AWS core default implementation is based on the MQTT protocol, which is used by AWS core to interact with devices. It decouples the producer and consumer by letting clients publish and having the broker decide where to route and copy messages. Rules are analysed and actions are performed based on the MQTT topic stream. The Topics identify AWS IoT messages. A message broker is used to apply topic names and topic filters to route messages send using MQTT and Hypertext Transfer Protocol (HTTP) to the Hypertext Transfer Protocol Secure (HTTPS) message URL. First, it is important to create a hierarchy of topic names that identify the relevant IoT system. Topic names and topic filters are UTF-8 encoded strings. A topic name could refer to a sensor in developed IoT devices (for example, sensor/temperature/caw1/farm1). After forming hierarchical identifying topic names, topic filters are created, which filter the messages by topic names and send them to the services subscribed to them.
As many IoT deployments consist of hundreds or thousands to millions of devices, it is essential to indicate (shadow) IoT devices. AWS shadow service creates a shadow identification of each IoT device used in the smart livestock frame. In this way, each of the used devices can be accessed and managed specifically by different services. These changes are made via the MQTT protocol or via HTTP using the device shadow REST API [26] (p. 525).
Due to the specifics of the used IoT devices in this application, they have limited computation, memory, and storage capabilities. This restricts opportunities for security. Therefore, additional measures are required to ensure the security of the devices. AWS IoT device defender [27] (p. 31) was chosen in this application. Registering the IoT livestock device with an AWS IoT core provides the digital identity of the IoT livestock device in the cloud. The IoT livestock devices use the certificates to identify themselves to the AWS IoT core. These certificates are generated by the AWS IoT core. From this moment, the AWS IoT device is responsible for maintaining and implementing IoT configurations such as device identity, device authentication, device authorisation, and device data encryption. This is an out-of-the-box solution as this service provides the necessary protection for all devices by constantly checking for deviations of IoT configurations and the occurrence of abnormal deviations from the expected behaviour of the device. In the case of abnormal behaviour detection, the user and CloudWatch service are immediately informed.
AWS IoT device management is a service that remotely manages IoT devices (individually or in groups) when a signal is detected for abnormal behaviour in the devices. This service eliminates problems by managing and updating the software and firmware.

A Lambda function is a stateless piece of code, with input and output that can be triggered from a wide array of sources internal and external to AWS. It can be used to automatically scale an application up and down without making capacity planning decisions. Unlike an EC2 instance [28], a Lambda has one dedicated purpose and intentionally only runs for up to a few minutes. Lambda functions scale instantly to hundreds of instances, with almost no platform maintenance.
In this work, Lambda functions in the livestock monitoring system are responsible for:

–
Converting each frame to jpeg format if it is different;
–
Storing raw frames in Amazon S3 by generating a unique key for each frame, which contains specific data about the place and time of the shooting: frames/farm_1/year/month/day/hour/min/sec/frame_number.jpeg;
–
Transmitting frames in jpeg format to Amazon “Rekognition” frame;
–
For each frame, Lambda functions save to Amazon DynamoDB specific metadata such as a unique ID, S3 bucket and key, where the frame is saved, the approximate recording time and more.

“Data Rekognition” framework deals with data coming from the cameras in the smart livestock IoT system. Each recorded video is divided into separate frames so that they can be processed and analysed in near real-time.
AWS Rekognition Service analyses objects, people, animals, scenes, and activities contained in the collected videos. Through this service, the application performs counting and identification of the presence or absence of specific animals, people, or objects around the farm in real-time. Personal protective equipment (PPE) detection is also performed. The results of the performed analyses are sent for storage in NoSQL database service DynamoDB, from wherein the presence of certain abnormal phenomena (identification of a missing animal, abnormal behaviour of an animal, or the presence of a stranger on the farm) are sent to Amazon Pinpoint via Kinesis Published Events.
AWS Rekognition is configured to detect and recognize faces in streaming video and to detect and count livestock. It uses AWS Kinesis Video Streams to receive and process a video stream, which is H.264 encoded. Used events are face detection and face comparison, and livestock label detection.
AWS Rekognition is used currently for several cases, and different performances have been observed. It has high accuracy when identifying persons, counting animals entering, or leaving an area one by one. However, the accuracy drops significantly for animal detection, especially in the part where the animal head position (high/low) is of interest. The results are also influenced by the livestock density occupying the same areas.

Amazon Pinpoint [27] (p. 49), as a communication service, connects with users through various channels such as email, SMS, push, or voice. This service is used to personalise messages with the right content. It sends push notifications to the smart livestock application after pre-provided data that authorises PinPoint to send messages. The credentials that are provided depend on the operating system:

AWS AppSync takes care of managing and updating real-time data between web and mobile app and cloud. Additionally, it allows apps to interact with data on mobile devices when it is offline.