Epidemiological and experimental studies have suggested that diet is one of the environmental factors that contributes to the onset and pathophysiology of ulcerative colitis.

Ulcerative colitis (UC)—a subtype of inflammatory bowel disease (IBD)—is a chronic, idiopathic inflammatory disease that affects the colon and is characterized by relapsing and remitting mucosal inflammation [1]. UC patients mostly present blood in the stool and diarrhea [1]. UC is associated with major morbidity in Western countries, and its incidence is increasing in developing countries [2]. The multifactorial pathophysiology of UC includes genetic predisposition, epithelial barrier defects, dysregulated immune responses, microbial dysbiosis, and environmental factors [1][2].
It has been suggested that environmental factors play a major role in the pathogenesis of IBD. Early-life events such as mode of birth, breastfeeding, and exposure to antibiotics and other factors such as air pollution, smoking, psychological state, exercise, and diet are among the potential environmental contributors of IBD development or disease activity [3].
Significant changes in dietary intake during the past decades have been associated with the increase in incidence of UC. The relationship between diet and UC development has been indicated in several epidemiological studies [4]. Two recent meta-analysis studies showed that soft drink consumption and sucrose intake were associated with 69% and 10% increased risk of UC development, respectively [5][6]. Consumption of fruits (odds ratio: 0.57) and vegetables (odds ratio: 0.71) was related to decreased odds of UC development in another meta-analysis study [7]. A significant association between meat intake (red meat in particular) and UC risk was found in a meta-analysis of seven epidemiological studies (summary relative risk: 1.47) [8]. Furthermore, whereas n-3 polyunsaturated fatty acids (PUFAs) content of diet was related to decreased odds of UC development (odds ratio: 0.56) [9], dietary arachidonic acid (an n-6 PUFA) as measured in adipose tissue increased risk of UC development (relative risk: 4.16) in a large prospective cohort study among Danish adults [10]. Although the exact pathophysiological mechanisms in which diet plays a role in IBD development remain unknown, several plausible explanations including its effects on composition of gut microbiota, production of microbial metabolites, alterations in mucosal immunity, and mucosal barrier function have been proposed [11] (Figure 1). 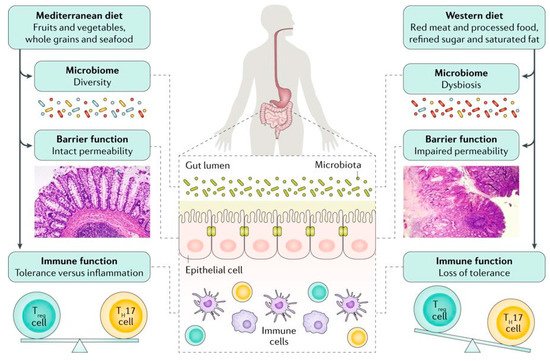 Figure 1. Although the exact mechanisms responsible for the association between diet and development of inflammatory bowel disease is unknown, several mechanisms have been suggested. An unhealthy dietary pattern such as a Western diet has been linked to changes in the gut microbiome and epithelial barrier function and seems to have a direct influence on immune function, triggering a pro-inflammatory environment characterized by an imbalance in the T helper 17 (TH17) cell to regulatory T (Treg) cell ratio [Adapted with permission [11]].
Abnormalities in the intestinal microbiota have been reported in some, but not all UC patients [1][12][13][14]. In some studies, UC patients have been shown to have decreased bacterial diversity, characterized by a decreased Firmicutes and increased Gammaproteobacteria and Enterobacteriaceae [15]. However, it is not clear if bacterial dysbiosis is the cause or effect of mucosal inflammation in UC [1][13] (Figure 2). 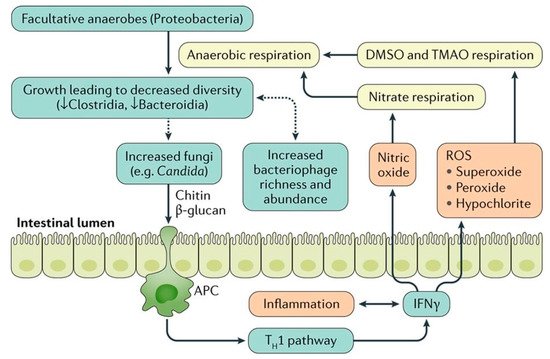 Figure 2. The relationship between gut microbiota and colonic inflammation in inflammatory bowel disease. Inflammation in colon stimulates production of Interferon gamma (IFN-γ) that eventually generates reactive oxygen species (ROS). ROS make products for anaerobic respiration. These products can be used by facultative anaerobes to outgrow, which leads to decreased bacterial diversity. The dysbiotic microbiota may further stimulate the growth of fungi that can worsen inflammation via chitin and β -glucan antigen-presenting cell (APC) activation of the type 1 T helper (TH1) pathway. In addition, the microbial dysbiosis is associated with increased bacteriophage richness and abundance, which can affect the bacterial microbiota via gene transfer. DMSO, dimethyl sulfoxide; TMAO, trimethylamine N-oxide. [Adapted with permission [13]].
Dietary factors can be related to UC pathogenesis or disease course through direct effects on the host or indirect effects through modulations of composition or function of gut microbiota. Diet has a major role in shaping gut microbial composition [16]. For instance, increased Bacteroidetes and decreased Firmicutes and Enterobacteriaceae in rural African children in comparison to European children were mainly attributed to differences in dietary patterns between the two populations [17]. Therefore, it has been suggested that diet-induced changes in microbiota may transform healthy gut microbiota into a disease-inducing entity that could either initiate or perpetuate inflammation in patients with IBD [16]. Agus et al. [18] indicated that a high fat/high sugar diet resulted in intestinal mucosal dysbiosis characterized by an overgrowth of pro-inflammatory proteobacteria and a decrease in protective bacteria. In addition, they showed that the transplantation of feces from high fat/high sugar fed mice to germ-free mice increased susceptibility to adherent-invasive Escherichia coli infection.
In addition to their significant effects on microbial composition, dietary factors can also affect the metabolic functions of gut microbiota. Short chain fatty acids (SCFA), which are defined as the groups of fatty acids with fewer than six carbons including formic acid (C1), acetic acid (C2), propionic acid (C3), butyric acid (C4), and valeric acid (C5), are derived from commensal bacterial fermentation of indigestible dietary fibers in both the small and large intestines [19][20]. Acetate, propionate and butyrate account for more than 95 % of all the SCFA content in the gut [19]. Acetate and butyrate in particular have an essential role in maintaining mucosal barrier function and modulating immune function [21][22] (Figure 3). SCFA regulate the functions of epithelial and/or immune cells through altering gene expression, cellular differentiation, chemotaxis, proliferation, and apoptosis [19]. The number of SCFA-producing bacteria such as Faecalibacterium prausnitzii is decreased in some UC patients, and these are inversely correlated with disease activity [23]. Moreover, a western diet characterized by high intake of sugar [18][24] and fat [18] and decreased amount of dietary fiber was associated with decreased SCFAs and increased susceptibility to colitis in experimental studies. 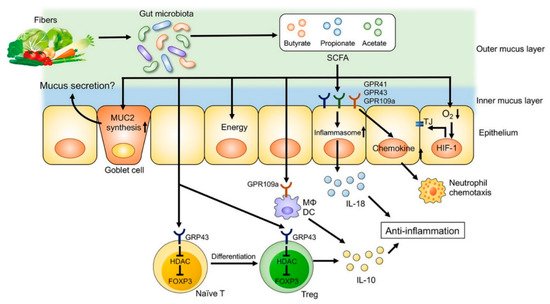 Here, we found that there have been few well-designed and/or adequately powered randomized clinical trials to investigate the role of diet in maintenance of remission in UC patients. As suggested in a recent Cochrane systematic review [35], consensus on the composition of evidence-based dietary interventions in IBD patients is required and there is a need for more high-quality, well-powered, randomized, controlled trials to assess the efficacy of these interventions.