Arterial hypertension is considered one of the most important cardiovascular (CV) risk factors and its connection to overweight and obesity has been extensively proved [1][2]. The prevalence of hypertension among obese patients may range from 60% to 77%, increasing with body–mass index (BMI), in all age groups [3] and it is significantly higher compared to the 34% found in normal weight subjects [3]. These percentages are relevant even when compared to high blood pressure (BP) prevalence in the general population: in 2015, the global age-standardized prevalence was 24.1% (21.4–27.1) in men and 20.1% (17.8–22.5) in women [4]. As shown from the Framingham Heart Study [5], weight gain is responsible for a large percentage of hypertension and it is associated with higher risk of having high BP, even when occurring late in life [6].
The latest definition of hypertension, provided by European Guidelines, is focused on the level of BP (considering office BP, as measured during medical evaluation) at which the benefits of treatment offset its risk, as documented by clinical trials [7]. BP ranges are also defined: the last classification identifies three grades of hypertension (beginning from grade 1, with systolic BP 140–159 mmHg and diastolic BP 90–99 mmHg, followed by grade 2, with SBP 160–179 mmHg and DBP 100–109 mmHg and grade 3, with SBP ≥ 180 mmHg and DBP ≥ 110 mmHg) and isolated systolic hypertension (SBP ≥ 140 and DBP lower than 90 mmHg) [7]. Regardless of the grade, treatment, either with lifestyle interventions or drugs [7], is indicated.

The pathophysiology of hypertension in obese subjects should be considered as a complex phenomenon. The cardiovascular system is affected by structural, functional and hemodynamical changes [8] which can directly increase hypertension risk. The consequences of these changes will not be discussed in the following paragraphs, since they are beyond the purpose of this review. Our attention is focused on the role of different kinds of adipose tissue. The role of Renin Angiotensin Aldosterone System (RAAS) and sympathetic nervous system activation is also considered.

Fat distribution has been shown to be strongly related to cardiovascular morbidity and mortality [9], independent of the other classical CV risk factors. The distribution of adipose tissue is one of the factors which links obesity to hypertension, along with age of onset of obesity, its duration and degree and weight variation across lifespan [10] (Figure 1). Visceral adiposity, in fact, plays a central role in BP increase, through a greater release of free fatty acid (FFA) in systemic circulation and a consequent increase in insulin resistance and hyperinsulinemia (Figure 1). These changes are firmly related to augmented arterial stiffness and a decrease in vasodilation [10]. Although insulin is a vasodilator hormone, insulin resistance can reduce insulin vasodilation capacity, thereby reducing the nitric oxide (NO) production by endothelial cells [11][12]. Also, the increased levels of insulin are responsible for lumbar SNA promotion, through brain receptor pattern activation, which is directly involved in BP increase [13]. Hyperinsulinemia is found to precede the onset of hypertension in high risk patients and this corroborates the hypothesis of the effect of insulin resistance on BP increase [10]. 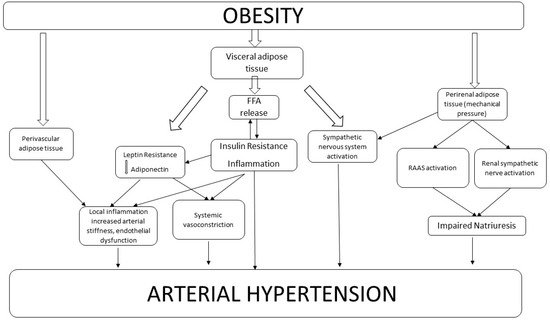 Perivascular adipose tissue (PVAT) represents adipose tissue (AT) that surrounds blood vessels. Its main function is to provide mechanical support to vessels and even regulate vascular homeostasis. In experimental models of angiotensin II-induced hypertension and deoxycorticosterone acetate (DOCA)-salt hypertension, complement cascade activation is described [14]. In particular, the effector C5a is recognized to promote macrophage infiltration of PVAT, which is responsible for further inflammatory activation [14].
It has been widely shown that PVAT releases biologically active adipokines, with paracrine effects on the vessels [15] (e.g., leptin, adiponectin, omentin, visfatin, resistin, apelin), cytokines/chemokines (e.g., interleukin-6, IL-6; tumour necrosis factor-α, TNF-α; monocyte chemoattractant protein-1, MCP-1), NO, prostacyclin, angiotensin-1 to 7 Angiotensin II and reactive oxygen species (ROS) [16][17][18][19][20]. Obesity leads to a dysfunction of PVAT which releases elevated levels of pro-inflammatory factors adipokines such as leptin, cytokines and chemokines directly to the vascular wall, contributing to endothelial dysfunction and inflammation [18].
All these molecules act with different effects on vascular tone regulation. PVAT-derived relaxing factors (adiponectin, NO, H2S prostacylcin) promote vasodilation and on the other hand PVAT-derived contractile factors, such as leptin, Ang II and ROS induce vasoconstriction. In obese subjects PVAT dysfunction results in augmented production of contractile factors, inducing increased arterial vasoconstriction and greater vascular tone [18][21]. PVAT anticontractile activity is shown to be reduced in hypertensive patients [20].
Moreover, it has been shown that the expression of factors involved in immune cell infiltration and even vascular smooth muscle cells (VSMC) proliferation, are increased in obese subjects, which leads to a general state of inflammation of PVAT and thickening of the arterial wall and probably contributes to an increased risk of hypertension. It has been observed that during the progression of hypertension, immune cells accumulate mainly in perivascular fat tissue surrounding both large and resistance vessels such as the aorta and mesenteric arteries. In particular, one study showed that in non-obesity-induced hypertension inflammation is highly pronounced in PVAT, whereas in non-perivascular visceral fat, immune cell infiltration is less pronounced [21][22][23].

In obese subjects, renal-pressure natriuresis may be impaired through mechanical compression of the kidneys by fat in and around the kidneys [1][24][25]. Increased sodium reabsorption caused by adipose renal tissue mechanical compression could indirectly contribute to renal vasodilation, glomerular hyperfiltration and stimulate increased renin secretion in obese subjects. Moreover, ectopic fat accumulation in and around kidneys seems to have “lipotoxic” effects on kidneys through increased oxidative stress, mitochondrial dysfunction and endoplasmic reticulum stress [26].

An important role explaining the increased risk of hypertension in obese patients is surely played by the activation of the renin angiotensin aldosterone system (RAAS) [27][28][29]. In obese subjects, increased renal adipose tissue activates the RAAS through mechanical compression in the kidney. Also, the RAAS can be activated by the increased Sympathetic Nervous System (SNS) activity of obese subjects. (Figure 1). Interestingly, it has been hypothesized that angiotensinogen, produced even by adipocytes, may play a role in determining increased BP in obesity [13][27], even if there is a lack of studies showing a direct effect of angiotensinogen or angiotensin II on BP regulation in obesity. Furthermore, there is evidence that adipocytes can synthesize aldosterone and it may be involved in a paracrine control of vascular function [13].

Several studies showed an increased sympathetic activity in obese subjects, as assessed by direct recordings of muscle sympathetic nerve activity (MSNA) [30][31][32][33][34]. Grassi et al. showed that both heart rate and MSNA baroreflex changes were attenuated in hypertensive obese subjects compared to normotensive subjects. They concluded that the association between obesity and hypertension triggers sympathetic activation together with baroreflex cardiovascular control, which could contribute to the increased incidence of hypertension in obese subjects. Finally, increased levels of leptin, together with the increased levels of pro-inflammatory cytokines, activate the SNS, leading to a BP increase in obese subjects.
Figure 1 describes the complex network which links obesity to arterial hypertension. The effect of different kinds of adipose tissue is shown—PVAT directly promotes local inflammation and contributes to endothelial dysfunction. Visceral AT can induce leptin and insulin resistance, which increase both systemic vasoconstriction and endothelial dysfunction. Moreover, visceral adipose tissue can directly activate the sympathetic nervous system. Perirenal adipose tissue, through mechanical compression, is involved in the RAAS activation and in renal sympathetic system activity. All these pathways, widely interrelated among each other, lead to increased arterial BP in obese subjects.

Several studies showed that WL may reduce BP: we analysed the studies looking at the effect of WL on BP in the last 10 years; we found 13 studies (either interventional or observational) that showed an association between WL and BP decrease (Table 1). Different WL strategies were taken into account: diet and lifestyle modification, pharmacological intervention and bariatric surgery. Although a positive effect of WL could be identified in each study, the main difference seems to be the magnitude and the durability of BP reduction over time. Some of these results were also corroborated by the evidence of 8 reviews published in the last ten years.
Table 1. This table summarizes selected studies from the last 10 years, showing a positive effect of weight loss (WL) on blood pressure (BP), achieved by diet and lifestyle modifications, pharmacological intervention and bariatric surgery. The table includes only studies with available data regarding number of participants, WL strategies, quantifiable mean WL and mean BP decrease, median follow-up time. * mean values referred to patients who achieved the major waist circumference reduction.
Interestingly, all the studies providing specific WL strategies in obese hypertensive patients showed a significant improvement either in BP decrease and or in body weight reduction. On the contrary, an observational study led by Ho et al., on 2906 obese subjects who developed incident hypertension and achieved BP control within 12 months after diagnosis, showed that the majority of patients did not achieve a significant WL [35]. Therefore, combined management should be pursued.

The explanation of the BP lowering effect of WL interventions may be identified in adipose tissue decrease. These changes may reverse the complex network of mechanisms linking obesity and hypertension (Figure 1). Visceral adipose tissue reduction, which is directly related to waist circumference reduction [36][37], may attenuate the inflammation pathway and arterial and ventricular stiffening may improve [38]. Moreover, it is well known that a visceral AT decrease, even due to a decrease of FFA release, is related to insulin resistance improvement (as also shown by the positive effect of WL, on diabetes management [39][40][41]) and a lower level of insulin may reduce systemic vasoconstriction that is partially responsible for arterial hypertension. Leptin [42] and adiponectin [43] pathways are also improved.
Since PVAT dysfunction is strongly related to obesity, it is possible to hypothesize that WL may improve PVAT functioning, by reducing the vasoconstriction effect. A reduction in vasoconstriction has been shown also after bariatric surgery [44], along with an improvement of RAAS functioning too. Weight loss may reduce renal adipose tissue as well and benefits may be found in natriuresis and sympathetic activation [24][25][45] and BP levels should consequentially lower. Unfortunately, only a few laboratory-based studies on the effect of weight loss on hypertension in the past decade have been published and new future studies are necessary to confirm possible mechanisms linking WL to the improvement of obesity-related hypertension