Hyaluronic acid (HA) is a non-sulfated glycosaminoglycan composed of repeating units of the disaccharide β-1,4-D-glucuronic acid– β-1,3 N-acetyl-D-glucosamine. This polysaccharide is naturally found in the human body, especially in connective tissues, skin, and synovial joint fluids. Apart from its biocompatibility and bio-functionality, HA displays physicochemical properties, such as high-water retention and viscoelastic properties, which make it the candidate of choice for bio-applications in several fields of medicine. Hyaluronic acid is employed as viscosupplement for the treatment of osteoarthritis, it constitutes a treatment for dry eye disease, and it is employed as an ingredient in dermatological and cosmetic formulations for skin care. Nevertheless, HA presents poor mechanical properties and rapid degradation via oxidative species and enzymatic degradation which hinder its use for some bio-applications. For example, for the use of hyaluronic acid as temporary scaffolds for tissue engineering applications, it is necessary to adjust the rate of degradation to the rate of formation of the new tissue. To overcome these drawbacks, the HA chains can be cross-linked, either chemically or physically to form hydrogels. The physicochemical properties, stability, and half-life of the native HA can be improved by modifying its structure and forming a hydrogel. After the reaction, the HA hydrogels can maintain the biocompatibility and biodegradability that characterize the unmodified material [1][2].

Over the last ten years, research interests in the development of hyaluronic acid hydrogels have increased exponentially as seen in Figure 1 , which represents the number of papers with the words “Hyaluronic” and ”hydrogel” found in SCOPUS. 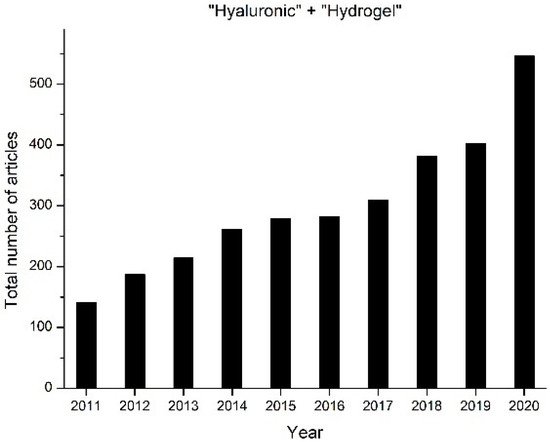 Divinyl sulfone (DVS) represents one of the most extended crosslinkers for the formation of hyaluronic acid hydrogels since the crosslinking process is simple, reproducible, and safe as it does not employ any organic solvents [3]. In a recent publication, some of us reported on the preparation and characterization of injectable hyaluronic hydrogels crosslinked with DVS at different HA: DVS weight ratios. The reaction between the hydroxyl groups present in the HA and DVS gives rise to ether formation and occurs at high pH values (0.25 M NaOH) and room temperature. An additional purification step was performed after the reaction (elimination of unreacted DVS) to obtain the final hydrogels. The hydrogels obtained at low HA:DVS weight ratios were non-cytotoxic and showed an excellent capacity to load antibiotics and anti-inflammatory agents [4]. In order to reach industrial production of hydrogels, a quality by design approach (QbD) must be adopted that predefines the properties of the targeted hydrogel. Such an approach is implemented by biomedical companies for the development of hyaluronic acid hydrogels that have reached the market in the form of injectable products [5]. Apart from DVS, glutaraldehyde, 1-Ethyl-3-(3-dimethyl aminopropyl) carbodiimide, or BDDE among others are traditionally employed for HA cross-linking. However, there might be biocompatibility issues with the resulting hydrogels. This is because some of them may possess in their structure unreacted cross-linkers which are known to be cytotoxic and can diffuse out of the hydrogel. In addition, the experimental conditions employed for the HA crosslinking reactions are often not compatible with cell culture conditions (pH 7.0–7.6, 37 °C) [6].

Another method of crosslinking for hyaluronic acid is ultraviolet (UV) photoinitiated crosslinking. Such an approach is often employed for the coupling of thiol groups, previously introduced within the HA backbone, to alkenes through a radical-mediated process. Thiol-ene photopolymerizations occur with any olefin bond, however, most of the HA hydrogels obtained in this way are produced through thiol- acrylate reactions. Hydrogels formed through thiol-acrylate photopolymerization display tunable mechanical properties by controlling factors that affect reaction kinetics (e.g., photopolymerization, light intensity, molecular weight, stoichiometry, and functionalities of monomers, temperature, chemical properties and concentration of initiators, and solvent choice) [7][8][9]. Although hydrogels formed by thiol-acrylate photopolymerization have found widespread applications in tissue engineering and regenerative medicine, photoinitiated crosslinking is also considered risky for some bio-applications as long irradiation periods required to improve the hydrogel mechanical properties might compromise cell viability [10].

2. Overview of HA Crosslinking Reactions Carried out at Physiological Conditions

In this entry, researchers aim to collect the most used chemical routes employed to obtain hyaluronic acid hydrogels under physiological conditions along with the biomedical applications from the resulting HA hydrogels. These methods include dynamic covalent processes such as boronic ester and Schiff-base formation and click chemistry mediated reactions such as thiol chemistry processes, azide-alkyne, or Diels Alder cycloaddition.

The design of crosslinking strategies for hyaluronic acid hydrogel formation at physiological pH and T conditions, expands the range of biomedical applications for these materials, especially for those in which the gel formation occurs in the presence of living cells, proteins, or drugs. In recent years click chemistry, characterized by its high reactivity, selectivity, and yield, appears as the most promising strategy for the development of hydrogel under mild conditions. In addition, its unique bioorthogonality allows for gentle and efficient encapsulation of several bioactives onto the formed hydrogels [11][12][13].In addition, many of the current strategies for the formation of HA hydrogels at physiological conditions involve the formation of dynamic bonds which can break down and then reform with or without an external stimulus. The nature of the reversible bonds can be based on covalent or noncovalent (physical) interactions [14]

In this section researchers will focus on Schiff-Base formation. A common way to functionalize HA with active carbonyl groups is through the oxidation of vicinal hydroxyl groups with sodium metaperiodate (NaIO4). The oxidation reaction breaks the C-C bond and produces two aldehyde groups at the oxidized carbons (two vicinal aldehyde groups). Then, the oxidized HA (OHA) can be crosslinked by Schiff-base reactions between aldehyde and amine groups [15], see Figure 2 a. Chitosan (CS), a natural polysaccharide containing amine groups with good biocompatibility and biodegradability, is an excellent candidate to be employed along with OHA in hydrogel formation under physiological conditions. Carboxyethyl –chitosan (CEC) biopolymer reacts with OHA to form dynamic hydrogels under physiological conditions. The hydrogels presented self-healing properties allowing for complete healing within 3 min giving the injectable capacity to the system. In addition, swelling dependence with pH was found in the hydrogels which enabled their employment as matrixes for controlled drug delivery. At acidic pH, the hydrogels showed lower swelling increasing the drug delivery but also at these acidic conditions the protonation of amino groups broke the dynamic bond improving the interconnectivity of the network. The hydrogels showed excellent biocompatibility and biodegradability [16][17]. Injectable hydrogels have also been obtained through the reaction between OHA and Glycol Chitosan (GC) under mild conditions [18]. The authors studied the influence of the degree of oxidation of HA, the mixing ratio of OHA/GC, and the final polymer concentration on the mechanical properties of the hydrogels. Recently, Graphene oxide (GO) was added to OHA/GC hydrogels to improve their osteogenic functionalities [19]. 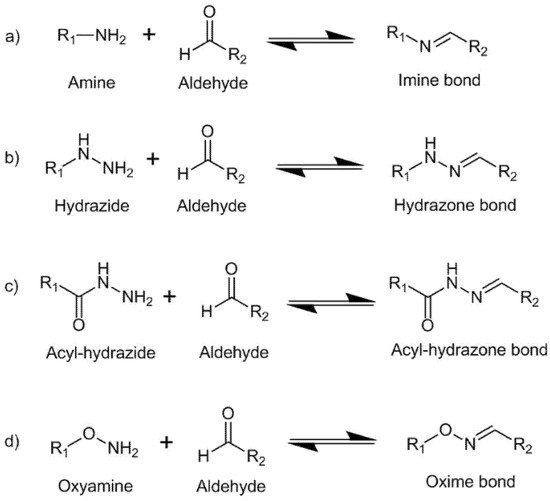 HA hydrogels crosslinked through oxime bonds can be formed by reaction between aldehyde or ketone groups with oxyamine groups ( Figure 2 d). The kinetics of the reaction at physiological conditions can be modified and accelerated through the addition of different salts, which can be considered as bio-friendly and non-toxic catalysts [20]. Injectable HA hydrogels based on oxime chemistry were recently obtained through the reaction between a polyethylene glycol (PEG) functionalized with oxyamine groups and a HA modified with aldehyde and ketone groups. The hydrogels showed tunable gelation times ranging from 15 min to 0,4 min by increasing aldehyde concentration, which enabled their injectability. The hydrogels showed cytocompatibility with retinal cells and a controlled swelling being able to maintain the ocular pressure in vivo (rabbit assays) over 56 days maintaining a healthy functional retina [21].

Thermo-sensitive hydrogels, which undergo in situ sol-gel transition at physiological temperature, without chemical or enzymatic modification, are widely studied as biomaterials to be employed in tissue engineering and long-term controlled drug release [22] Among them, physical thermoreversible hydrogels obtained through noncovalent interactions (hydrogen bonding, ion crosslinking, or hydrophobic interactions, among others) have attracted considerable attention over the years because of the mild conditions required for the formation of crosslinking points [23].

Other thermosensitive systems widely studied for biomedical applications are amphiphilic polyethylene glycol (PEG)-based copolymers such as Pluronics which is a PEG–polyester-based triblock consisting of hydrophilic poly (ethylene oxide) (PEO) and hydrophobic poly (propylene oxide) (PPO) blocks arranged in a basic A-B-A tri-block structure. Physical mixing of high-molecular-weight HA with Pluronics results in thermosensitive hydrogels with enhanced mechanical properties and sustained drug release behavior, thus avoiding burst drug release reported for Pluronic copolymer hydrogels employed as biomaterials for intra-articular injection [24]. Another approach consists of chemical modification of HA and Pluronics with functional groups liable to in situ crosslinking. Pluronics can be end-capped with thiol groups and then react with HA conjugated with dopamine through a Michael-type addition. Interestingly, even if these HA-DN/Pluronics gels were chemically cross-linked, they exhibited thermally reversible sol-gel transition which was found to appear at temperatures lower than the corresponding to Pluronics hydrogels [25]. Grafting of Pluronics to HA results in copolymers being able to gelify with temperature. The Pluronics grafting percent influences the sol-gel temperature, i.e., at the highest Pluronics grafting percent, (86.4%) the copolymer showed a slightly higher gelation temperature compared to the unmodified Pluronics at all concentrations [26].

Chitosan derivatives such as hydroxypropyl chitin (HPCH) have also been combined with HA to obtain thermosensitive hydrogels. Hydroxypropyl chitin can form hydrogels at 37 °C at low concentrations (~2 wt%). The mixing of HPCH with hyaluronic acid gives rise to polymer hydrogels able to stabilize negatively charged compounds for drug release applications [27]. A similar approach has been used for the development of thermo-sensitive HA physical hydrogels with anti-adhesion properties as a strategy to alleviate surgery-related adhesions. To that aim, methylcellulose has been mixed with HA. Methylcellulose (MC) is a typical temperature-responsive water-soluble polymer that can gel at 37 °C in the presence of salts [28].

It is reported that aqueous solutions of gelatin, a natural polymer obtained from the partial denaturation of collagen, are able to form physical hydrogels upon cooling below room temperature [29]. However, the employment of gelatin hydrogels for biomedical applications is limited since the melting temperature of gelatin hydrogels is ~32 °C and thus, under physiological conditions, gelatin gels are unstable and present poor mechanical properties. Very recently, an approach based on natural polyelectrolyte complexes coatings has been developed in order to endow gelatin with dimensional stability at a physiological temperature [30]. Blends of hyaluronic acid with gelatin give rise to reinforced hydrogels that can act as biomimetic hydrogels formed by a protein and a polysaccharide being similar to extracellular matrix structure [31].