Enteroviruses (EVs) from the D species are the causative agents of a diverse range of infectious diseases in spite of comprising only five known members. This small clade has a diverse host range and tissue tropism. It contains types infecting non-human primates and/or humans, and for the latter, they preferentially infect the eye, respiratory tract, gastrointestinal tract, and nervous system. Although several Enterovirus D members, in particular EV-D68, have been associated with neurological complications, including acute myelitis, there is currently no effective treatment or vaccine against any of them.

Enteroviruses (EVs) are among the most prevalent viruses worldwide and several of them are important human pathogens. This group of viruses is characterized by a high genetic and phenotypic diversity, although the determinants behind it are still poorly understood. The Enterovirus D species includes five members with distinct symptomatology, illustrating EV diversity.

Enterovirus genus includes 15 different species, each further subdivided in numerous types. Seven species, Enterovirus A to D and Rhinovirus A to C , contain human-infecting viruses [1][2][3], while the remaining eight species contain viruses with a wide host range from camelids to rodents and even marine mammals [4].

Enterovirus D is among the smallest species of the Enterovirus genus, counting only five types, but the host range, tissue tropism, and associated diseases are very diverse. EV-D68 and EV-D70, the first discovered EV-Ds, infect only humans but, unlike most EVs from the A to C species, they are not considered enterotropic viruses and are rather associated with respiratory and eye infections, respectively [5][6]. Although the EV-D68 genome has been detected in stools samples, no infectious viruses were isolated [7]. EV-D68 is also the only acid-sensitive in the Enterovirus D species [8][9]. The other three EV-D types, EV-D94, EV-D111, and EV-D120, were detected in Africa and remain poorly characterized. EV-D94 was discovered in 2007 in samples from sewage in Egypt and from acute flaccid paralysis (AFP) cases in the Democratic Republic of the Congo [10]. EV-D111 was identified both in human and primates stool samples, while EV-D120 was only detected in stool samples of wild non-human primates [11][12]. Important to note, the circulation of these viruses in humans may be underestimated as exemplified by seroprevalence studies highlighting the high prevalence of anti-EV-D94 antibodies in the Finnish population [10].

Based on the full genome sequence, EV-D94 is more closely related to EV-D111 and EV-D70 than to EV-D68 ( Figure 1 A). In fact, it has been proposed that EV-D94 and EV-D111 evolved by intertypic recombination, whereas no evidence has been found to support such recombination between these two viruses and EV-D68 [11]. In contrast, based on VP1 sequences, EV-D94 is closely related to EV-D68 and EV-D70 to EV-D120, while EV-D111 appears to be the most distinct member of the species ( Figure 1 B). This variation in VP1 may reflect different selective pressures. Important to note, the VP1 sequence divergence does not account for the observed intraspecies phenotypic diversity and is not specific to Enterovirus D . Indeed, other EV species infecting humans also contain viruses capable of causing a wide range of diseases (reviewed in Reference [3]) with the exception of the three rhinovirus (RV) species that contain only viruses causing respiratory infections. Even though recombination has been determined as a crucial mechanism for EV evolution, it seems to be a rare event among human-infecting EV-Ds probably due to distinct in vivo tropism [11][13].

EVs are well known for causing a plethora of symptoms (Figure 5). Even though most infections are commonly asymptomatic, they can lead to life-threatening complications, predominantly in children of young ages, immunocompromised adults, or adults with other underlying morbidities [3][18][19][20]. The vast majority of EVs are transmitted via the fecal–oral route and/or contact with respiratory secretions. Their primary infection sites are typically the mucosal surfaces and normally the infection is restricted to the primary infection site [21][22]. However, infection can spread and evolve into a viremic phase, disseminating to other tissues via lymphatic or blood circulation. In more severe outcomes, the infection can reach the central nervous system (CNS), which can result in meningitis, encephalitis, paralysis, and possibly death (Figure 2) [22][23]. 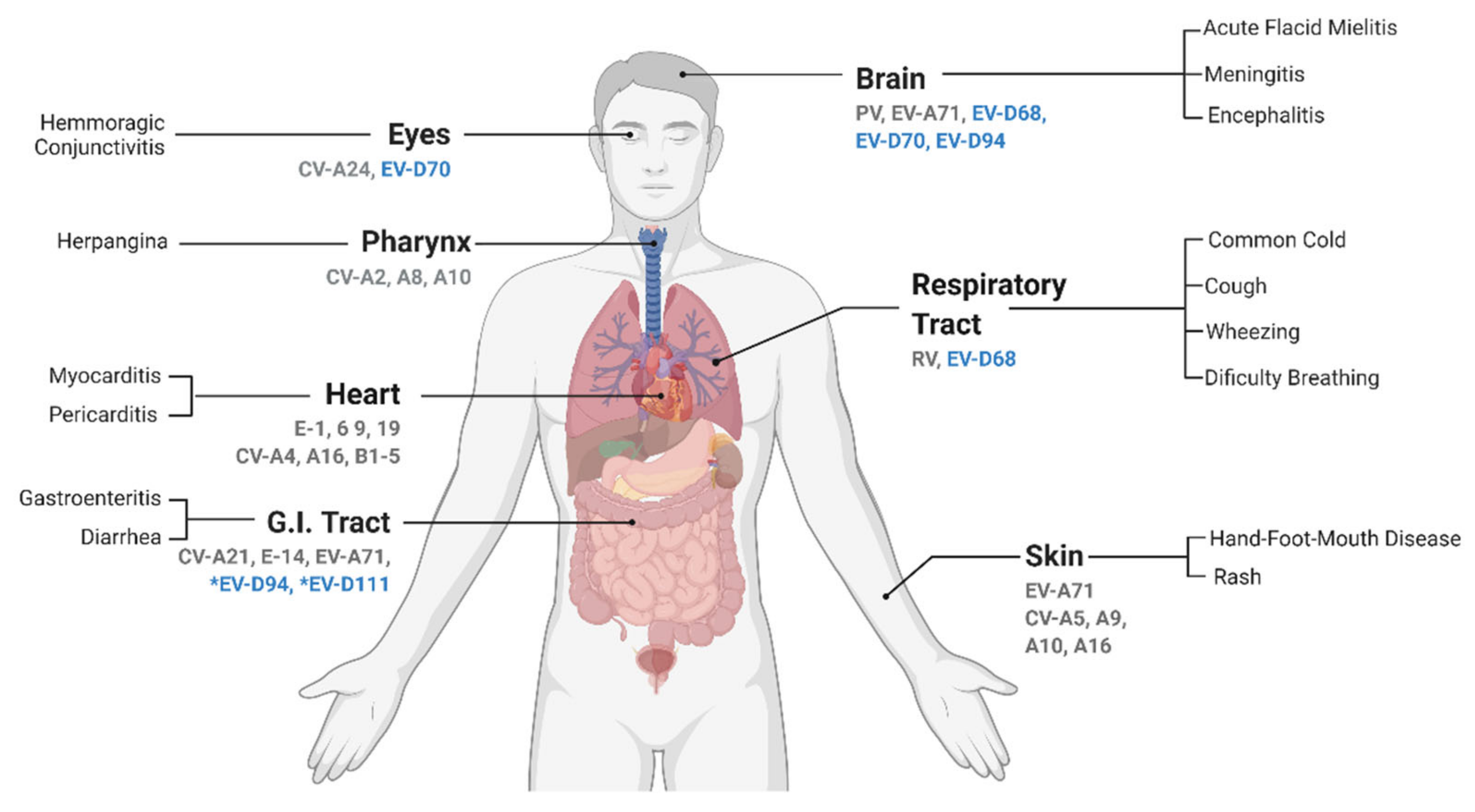 Figure 2. Tropism and associated symptoms of human enterovirus infections. The most commonly reported symptoms associated to each EV infection in the human host are depicted, grouped by organ. Highlighted in blue are the members of the Enterovirus D species. All EV-Ds infecting humans have been associated with neural infections, although a causal link remains to be demonstrated. Their primary replication site is reported to be initiated either in the eye (EV-D70), respiratory tract (EV-D68), or gut (EV-D94 and EV-D111). Even though there is an association between *viruses found in stools, no gastro-intestinal symptoms are reported. Abbreviations: EV, enterovirus; RV, rhinovirus; CV, coxsackievirus; PV, poliovirus; and E, echovirus. Adapted from: “Expression of ACE2 Receptor in Human Host Tissues” by BioRender.com (2021). Retrieved from https://app.biorender.com/biorender-templates, accessed on 15 July 2021.
EV-D70 has a rather distinctive disease association and it has been identified as the cause of several outbreaks of acute hemorrhagic conjunctivitis worldwide. It was first isolated in 1971 after an initial outbreak in Ghana in 1969, which spread to other parts of the world in the following years (South-East Asia, Japan, India, and England) [6][24]. Common symptoms of the disease include eye pain, swelling of the eyelids, redness of the conjunctiva, excessive tearing, photophobia, and eye discharge [25]. The symptoms usually subside without the need for treatment in about 10 days. Typically, EV-D70 reaches the conjunctival and corneal epithelium by hand-to-eye transmission of the virus from infected surfaces or objects [25]. It is a cytopathic virus that induces cell apoptosis [26] and the shedding of cells into the eye secretions correlates with the symptomatology of conjunctivitis. EV-D70 is also able to infect several lineages of leukocytes [27], which are also abundantly found in eye discharges. It is through these discharges (and poor hygiene conditions) that the virus spreads to other people [25]. Despite being rare, hemorrhagic conjunctivitis caused by EV-D70 can also cause non-ophthalmic symptoms such as neuronal dysfunction [25][28]. The capacity of EV-D70 to infect leukocytes could be the mechanism by which it reaches the CNS via lymphatic circulation [27]. Nevertheless, this hypothesis was not yet elucidated.
Enterotropic EV-D94 and EV-D111 have been isolated from stool samples of humans in African countries [10][11][29], while EV-D120 has only been identified in non-human primate feces [12]. No exact symptomatology has been described for EV-D120 and EV-D111 and even less is known about their pathogenesis. Due to its origin, its acid-resistance and optimal growth at 37 °C, EV-D94 has been postulated to cause enteric disease and to be transmitted via the fecal–oral route [10]. The primary target tissue of EV-D94 is currently not known but in vitro experiments reveal that EV-D94 is able to infect leukocytes, endothelial cells, and human pancreatic islets [21]. EV-D94 may also cause neurologic symptoms given that it was first isolated from a child from the Democratic Republic of Congo who was suffering from AFP [29].
The respiratory member of the Enterovirus D species, EV-D68, is likely the most popular as it has been the cause of biennial outbreaks in the pediatric population in recent years. However, this is not a recent virus but rather a re-emergent one. It was first isolated in California in 1962 from children with pneumonia and bronchitis (giving rise to the Fermon, Rhyne, Franklin, and Robinson strains) [30]. It is acid liable and has an optimal growth at 33 °C, as opposed to its enteric counterparts. Due to its similarity with other RVs, it was first classified as human rhinovirus 87 and only later re-classified as EV-D68 [31]. Its clinical presentation can vary from no symptoms or mild respiratory disease (runny nose, sneezing, cough, and body and muscle aches) to severe respiratory pathology (with wheezing, difficulty of breathing, and fever) or even life-threatening neurologic syndromes [5][19]. During a widespread outbreak in the United States of America in 2014, EV-D68 gained public interest due to its high morbidity in children [19]. Severe complications arose from respiratory illness to a polio-like disease, described as AFM [32]. The recently characterized strains of EV-D68 from the 2014 outbreak seem to be less susceptible to attenuation at 37 °C, can infect neural tissues independently of SA, and can utilize the neural receptor ICAM-5 (abundantly found in the telencephalon and also identified as a receptor for prototypic strains) [33][34][35][36]. Infection via intramuscular injection in neonatal mice using several contemporary strains of this virus results in limb paralysis and interestingly the severity of the paralysis is age-dependent [37]. A follow-up study from the same group suggests that the virus reaches the CNS by retrograde axonal transport via neuromuscular junctions, from the distal axons of motor neurons and spreading up to their neuronal cell bodies [38].

Herein, we have summarized the current knowledge on EV-D members and the known strategies used by EVs to hijack the host cell machinery. Despite its small size, the Enterovirus D species contains relevant human pathogens able to cause a wide-range of symptoms including respiratory illness, eyes infections, and neurological complications. However, there is still a lot to learn about this peculiar EV species. There are currently no vaccines or antivirals available against EV-D members. Since the 2014 outbreak, EV-D68 has become the most popular and feared EV-D due to its increased virulence, associated with severe respiratory disease and novel neurotropic potential. As a result, most antiviral research has targeted this virus. Several antiviral strategies have been proposed (reviewed in References [39][40]) such as capsid-binding compounds [41][42][43][44][45][46], viral proteases’ inhibitors [43][44][47][48][49], drugs targeting the non-structural proteins 2C [43][50][51], 3A [42][43][44][52], the viral polymerase 3D [42][44][53][54] and drugs blocking translation [55]. However, even the most favourable candidates did not obtain promising results in the mouse models [50][56].
In addition to the possible re-emergence of EV-D members already established in the human population with new virulence factors, the existence of a large animal reservoir poses the threat of the zoonotic emergence of new neurotropic variants. Phylogenetic analysis of EV-D111 strains suggests recent zoonotic transmission between NHP and humans [11], consistent with the zoonotic origin proposed for EV-D70 [57][58]. Similar observations have been made for other EVs [59][60]. Surveillance of EV-Ds or other EVs circulating in NHP is thus critical to be prepared in case of the emergence of novel variants in an immunologically naïve population.
To conclude, further studies on EV-Ds are needed not only to better understand the wide range of diseases caused by these viruses in humans and to find effective antiviral strategies, but also to better apprehend the zoonotic potential of these viruses.