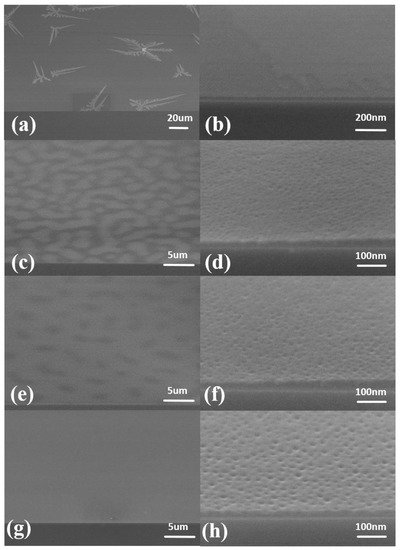 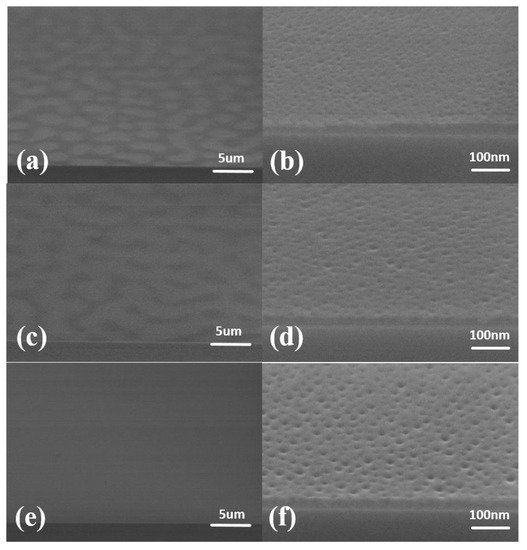 In order to explore the controllability of the blend ratio of PS-b-PC to PS, we designed nine groups of experiments (Table 1, in which the ratio of PS-b-PC to PS is the volume ratio). Experiment results are shown in Figure 3, in which the annealing temperature is 130 °C, the annealing time is 30 min, and the annealing atmosphere is a vacuum. Different sub-figures represent different blend ratios. Experimental results showed that cylindrical structures could be formed when the PS-b-PC to PS ratio is from 2.5:1 to 1:1.5 (experimental No. 3 to No. 7). Outside this range, cylinder cannot be formed, but there are other patterns. 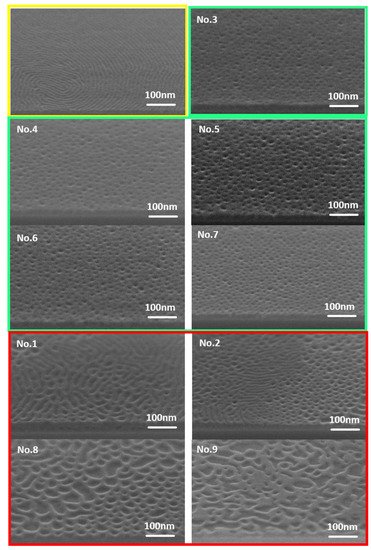 Figure 3. SEM images of blend phase separation results. The annealing temperature is 130 °C, and the annealing time is 30 min. The thickness of blend materials is about 20 nm. The vacuum degree is −0.1 MPa.
Table 1. The experiment with different ratios.
In Figure 3, the yellow box is the layered structure formed by the phase separation of pure PS-b-PC; the pitch of lamellar is about 16 nm. The green box is the columnar structure formed by the phase separation of the blended material corresponding to experiments No. 3 to No. 7, in which the cylinder diameters are 12.36 nm, 13.09 nm, 15.12 nm, 14.26 nm, and 11.85 nm, respectively. The red boxes are other structures formed by the phase separation of the blended materials, in which experiments No. 1 and No. 2 formed a mixed structure of layered and porous, and experiments No. 8 and No. 9 formed irregular structures.
When the proportion of PS is low, layered and porous structures are formed. With an increase in the PS ratio, the microdomain area of the layered structure decreases, and the microdomain area of the porous structure increases. When PS-b-PC:PS reaches 2.5:1, self-assembly forms a columnar structure. When PS-b-PC:PS is 1:2, the structure becomes irregular.
Figure 4 showed that the formation of the pattern is, in fact, cylinders. 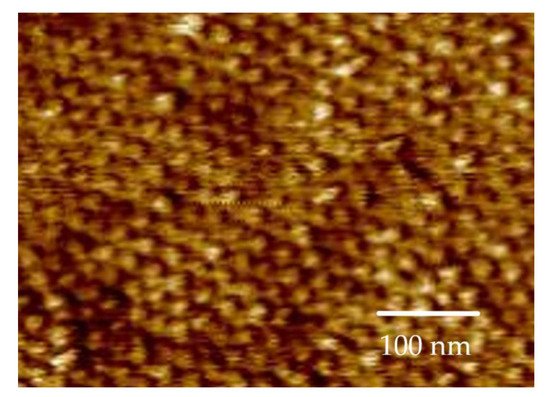 Figure 4. AFM image of cylinders (corresponding to Figure 3 No. 7).

The influence of the molecular weight of the block copolymer on the quality of phase separation pattern was explored. Two new samples, samples 2 and 3, were added to the experiment, as shown in Table 2. Experiments showed that with an increase in molecular weight, the size of the cylinder increased (Figure 5). By comparing Figure 5a with Figure 5c, the results showed that the spacing between cylinders increased.

Figure 5. SEM images of blends materials phase separation results. The annealing temperature is 130 ℃, and the annealing time is 30 min: (a) sample no. 1; (b) sample no. 2; (c) sample no. 3. The vacuum degree is −0.1 MPa.
Table 2. The parameters of materials.
In order to reflect the experimental results more accurately, we collected and calculated the data extracted from the SEM images and plotted the result, as shown in Figure 5. The diameter of the structures was used to describe the dynamic process. Figure 6 shows the pattern diameters of the samples with different molecular weights. The average diameters of sample 1, sample 2, and sample 3 were 19.188 nm, 21.17533 nm, and 21.84 nm, respectively. With an increase in molecular weight, the size of the pattern increased but the pattern structure became sparse. 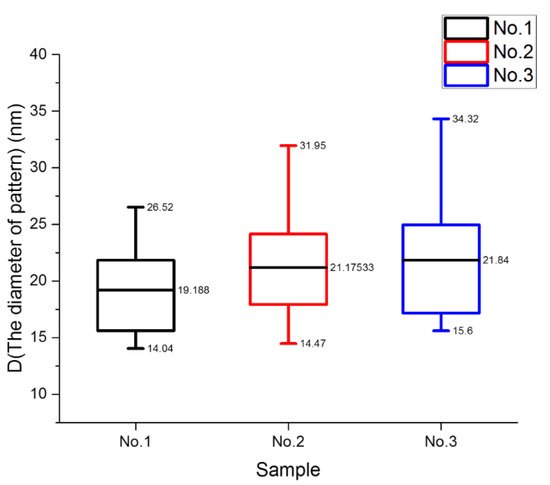