The Internet of Things (IoT) plays a vital role in interconnecting physical and virtual objects that are embedded with sensors, software, and other technologies intending to connect and exchange data with devices and systems around the globe over the Internet. With a multitude of features to offer, IoT is a boon to mankind, but just as two sides of a coin, the technology, with its lack of securing information, may result in a big bane. It is estimated that by the year 2030, there will be nearly 25.44 billion IoT devices connected worldwide.

We live in a time when technology is an essential requirement for all humans, and the evidence is the increased dependence on technology in almost every aspect of our lives. Today’s world is evolving with the rapidly growing Internet of Things (IoT)-based application [1]. The rise of the IoT has been a glorious phenomenon in recent years. The physical and virtual objects implanted with sensors, software, and other technologies are interlinked together in IoT [2]. It envisages communicating and sharing data with other devices and systems worldwide over the Internet. Further, IoT is like an array of network-enabled devices that exclude traditional computers such as laptops and servers.

To implement IoT, the traditional technology had to undergo some major modifications. For example, to convert an isolated device into a transmitting device, there is a need to increase small computing devices’ memory and processing capacity while dramatically reducing their size [3]. Further, the creation of various lightweight, secure protocols for communication between different IoT devices is equally important. The improvements to the conventional networks to help the operation of the IoT ecosystem have their own set of consequences. However, the unprecedented growth of interconnected devices has crippled the IoT ecosystem. Consequently, there exists enough scope for threats and attacks in IoT-based applications.

The Global Vice President at New Net Technologies (NNT), Dirk Schrader, stated that IoT-based computers have become the crown jewels of cybercriminals. He also said that less than 42% of businesses can detect insecure IoT devices. Hence, for researchers to develop well-grounded solutions to trace and avert these threats, they must first understand the threats and attacks to make the IoT environment safe, secure, and reliable. There are three significant aspects to consider while examining the IoT from a security perspective. To begin with, there are a massive number of smart devices, possibly billions. This suggests that the IoT would be the most complex man-made system ever in terms of the number of entities involved [4]. Second, they are essentially heterogeneous, with respect to the functionality, protocol stacks, radios, operating systems (some objects do not even have one), energy sources, identities, and so on [5]. Third, each smart object is owned by a company or a person, and it is managed by the same or a different company or individual. Millions of businesses and individuals are in control of a subset of the smart objects in their management domains. From the standpoint of protection, privacy, and trust, how this control is technically upheld is a critical issue.

The state-of-the-art survey on various aspects of IoT, including security, privacy, and robustness, has been presented in [6] by Chen et al. The authors focused on specific issues of IoT interface positioning and localization. The development of lightweight block cipher algorithms has been proposed to be used in devices for data encryption and decryption [7]. A desktop review and qualitative analysis have been performed by Gamudani et al. in [8] to compute performance analysis of attacks. Cryptographic approaches have been discussed in [9] as a method of ensuring long-term security approaches. Different layer architectures of IoT and security issues associated with them have been discussed with possible countermeasures using Blockchain (BC) in [10]. The survey on security aspects of IoT has been presented by Alaba et al. in [11], covering the scope of security countermeasures in some other allied paradigms, including Machine-to-Machine (M2M), Cyber-Physical System (CPS), and Wireless Sensor Networks (WSNs). In [12], Abomhara et al. discussed various applications of IoT and the security threats related to them, including vulnerabilities, intruders, and some other attacks. The threats concerning security and privacy in IoT architecture have been presented without counter measuring techniques by Kozlov et al. in [13].

Vulnerabilities are the defects in a framework’s design or usefulness that permits the attacker to execute orders, access unapproved information, and launch distributed denial-of-service (DDoS) attack [14]. Attackers can utilize IoT gadgets with existing issues to infiltrate the networks. DNS rebinding attacks, which allow for the processing and ex-filtration of data from internal networks to new side-channel attacks, such as infrared laser inducted attacks against smart devices in homes and workplaces, are among the risks. In IoT systems, vulnerabilities can be found in several places [15].
Hardware and software systems are two central components of IoT frameworks, vulnerable to design flaws. Regardless of whether bugs are identified due to compatibility and interoperability of the equipment or efforts to remedy them, hardware flaws are very difficult to detect and even more difficult to repair. Computer bugs may exist in operating systems, programming software, and control software. Human elements and programming complexity are two factors that contribute to software configuration defects. Human flaws are normally the source of technical vulnerabilities [16]. Miscommunication between the developer and clients, lack of resources, skills, and experience, and a failure to manage and monitor the system can result from a poor understanding of the specifications introducing vulnerabilities in the IoT framework. Thus, vulnerability poses indispensable threats and attacks in the IoT environment. What follows next is the taxonomy of threats and attacks in IoT.

3. Taxonomy of Threats and Attacks in IoT

A threat is an activity that exploits a system’s security flaws and has a negative effect on it. Humans and the environment are the two main sources of security threats [17][18]. As an example, seismic tremors, typhoons, floods, and fires are all natural hazards that can cause serious damage to computer systems. Few shields can be used to protect against traumatic events since these naturally occurring events cannot be prevented. Backup and contingency planning, for example, are the best ways to protect stable infrastructures from common threats. Human threats are those that humans create, such as malicious threats that are either internal (someone has allowed access) or external (individuals or organizations operating outside the network) in nature and seek to damage or disrupt a system. Following are the different types of human threats:
A taxonomy of threats posing a big concern from a security perspective in the IoT environment is shown in Figure 1.

Figure 1. Taxonomy of threats in IoT.
Compared to the threat that can be intentional or unintentional, the attack is always intentional and malicious to cause damage. Several security attacks persist in the IoT framework, which can be analyzed with respect to the proposed IoT reference model. A taxonomy of attacks in IoT has been presented in Figure 2. These threats and attacks pose severe challenges to the IoT environment from a security perspective. The security concern due to various threats and attacks are categorically described in the following subsections. 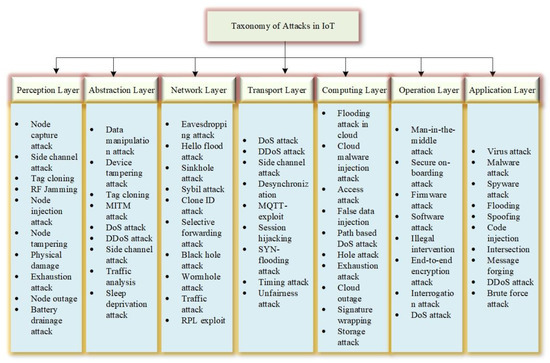 Figure 2. Taxonomy of attacks in IoT.

4. Security Goals and Roadmap in IoT

There are certain security objectives that IoT must essentially meet to provide undisputed services. For smooth functioning, IoT applications require secure connections with proper authentication mechanisms and data confidentiality. To ensure information security, one needs to implement the CIA triad—data Confidentiality, Integrity, and Availability. Threats and violations in any of these areas can result in substantial damage to the system, compromise its integrity, and disrupt its activity. To be efficient in implementing effective IoT security, the following primary security objectives must be considered. These security objectives can be achieved with effective methodologies for detection, prevention, and mitigation of threats and attacks pertaining to the IoT ecosystem, described in the next section.