Fullerenes can be regarded as simple and fundamental building blocks with mono-elemental and zero-dimensional natures, these demonstrations for hierarchical functional structures impress the high capability of the nanoarchitectonics approaches. In fact, various hierarchical structures such as cubes with nanorods, hole-in-cube assemblies, face-selectively etched assemblies, and microstructures with mesoporous frameworks are fabricated by easy fabrication protocols. The fabricated fullerene assemblies have been used for various applications including volatile organic compound sensing, microparticle catching, supercapacitors, and photoluminescence systems.

Nanoarchitectonics is a conceptual methodology to combine nanotechnology with other research fields such as organic chemistry, supramolecular chemistry, materials chemistry, microfabrication technology, and bio-related science [1][2]. Functional material systems are prepared from nanoscale units such as atoms, molecules, and nanomaterials through combinations and selections of building units and processes including atom/molecular manipulation, chemical transformation, self-assembly/self-organization, field-controlled organization, material processing, and bio-related treatments [3]. Because this concept is general and applicable for a wide range of materials, the nanoarchitectonics concept has been used in various research fields such as material production [4][5][6], structural fabrication [7][8][9], catalysts [10][11][12], sensing [13][14][15], devices [16][17][18], environmental usage [19][20][21], energy-related applications [22][23][24], biochemical science [25][26][27], and biomedical applications [28][29][30]. Nanoarchitectonics strategies for materials creation from fundamental units of atoms and molecules could apply to any kind of material with any desirable function [31] (Figure 1) [32]. 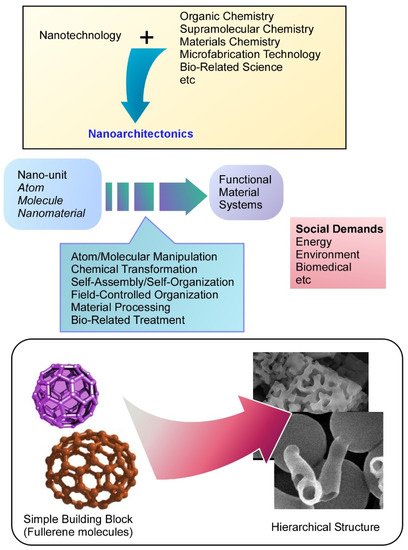 Figure 1. Nanoarchitectonics is a conceptual methodology to combine nanotechnology with other research fields, in which functional material systems are prepared from nanoscale units.
Nanoarchitectonics approaches have two distinct features. One of them is harmonized nature between contributing processes [33][34]. Unlike actions between objects at microscopic scales, the interaction between nanoscopic objects often includes uncertainties such as thermal fluctuations, statistical distributions, and quantum effects. Total effects are not always the same as a summation of individual actions. Therefore, materials productions have to be considered with the harmonization of contributing interactions rather than their simple summation. Another feature of the nanoarchitectonics approaches is advantageous features to construct asymmetric and/or hierarchical material systems [35]. Self-assembling processes are mostly driven through an energy–consume-less equilibrium. Unlike conventional self-assembling processes, the nanoarchitectonics approaches can include multiple steps where energy-consuming non-equilibrium processes are often involved. Stepwise processing and sequential treatment for materials fabrications result in the formation of materials with hierarchical structural motifs. It can be said that the nanoarchitectonics approaches are advantageous for the constraction of hierarchical materials structures. 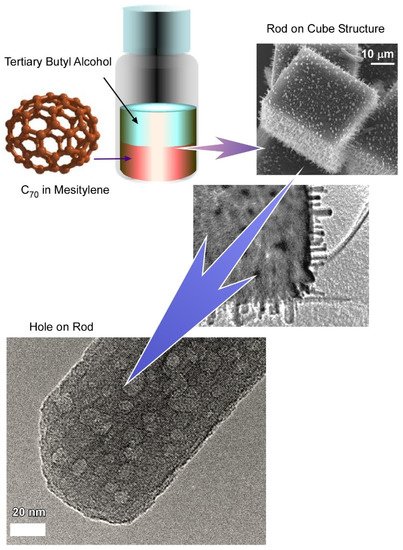 Controlled structural modification and surface functionalization of such hierarchical fullerene microstructure is highly desirable to widen their sensing ability towards nonaromatic vapors. Additionally, conversion of hydrophobic fullerene to their hydrophilic counterpart through surface functionalization opens the possibility to use them in several biological applications. Hsieh et al. demonstrated such modification through face-selective chemical etching of fullerene assemblies (Figure 3) [37]. Their results showed a simple and scalable strategy for the fabrication of hollow and hierarchical fullerene nanostructures via face-selective etching of the self-assembled fullerene crystals. 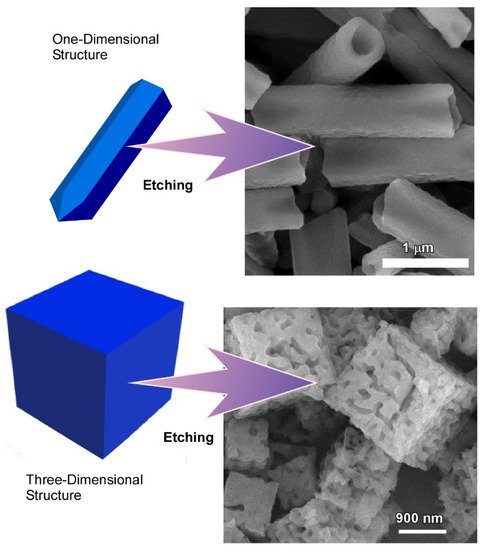 As a continuation of the previous discussion, not only the surface functionality but also the shape of the fullerene hierarchical nanostructures has great importance to improve their potential application in a different field. In this regard, the combination of good solvent and poor solvent during the self-assembly of pristine fullerene via the liquid–liquid interfacial precipitation method is the determining factor to control the hierarchical structure. Furuuchi et al. demonstrated the assembly of C60 into exceptional morphology called “bitter melon” shaped nanoporous C60 assemblies by tuning the liquid–liquid interfacial precipitation method at room temperature (25 °C) (Figure 4) [38]. In this case, isopropyl alcohol was used as a poor solvent, and C60 solution in dodecylbenzene as a good solvent to form a clear liquid–liquid interface. Ultrasonication and vortex mixing were applied to modify the conventional liquid–liquid interfacial precipitation method before 24 h incubation at 25 °C. XRD and high-resolution transmission electron microscopy (HRTEM) analysis confirmed the crystalline nature of the self-assembled fullerene structure. Powder XRD patterns of the as synthesized “bitter melon” shaped C60 assemblies showed mixed crystal phases, including fcc and hcp phases. TEM analysis confirmed the nanoporous nature of the fullerene structure. Surface textural properties and nanoporous architectures of bitter melon shaped fullerene C60 assemblies make them excellent receptor materials of quartz crystal microbalance for sensing toxic volatile organic compounds. Here also, selectivity towards aromatic solvent vapors is excellent over nonaromatic compounds due to the favorable π–π interaction. Among aromatic vapor, selectivity towards aniline is the highest. 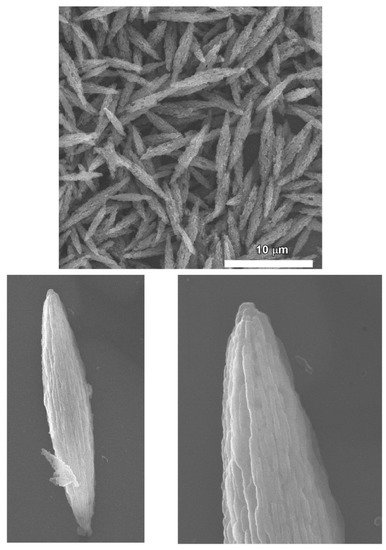 Bairi et al. demonstrated the fabrication of a C70 cube with an open hole on each face of the cube through controlled self-assembly at the liquid–liquid interface (Figure 5) [39]. Additionally, it was established that the process to close and open the holes can be done purposefully. Fullerene C70 cubes with open or closed holes were produced by the dynamic liquid–liquid interfacial precipitation method at 25 °C using mesitylene as a good solvent and tertiary butyl alcohol as a poor solvent followed by 24 h incubation under 25 °C. The formation mechanism of such an open hole cube is different from the previously discussed solvent or chemical etching mechanisms. Detailed structural analysis via cross-section SEM confirmed that the holes are not hollow through. Additionally, TEM images of fullerene assemblies formed just after the mixing of C70-mesitylene with tertiary butyl alcohol confirmed the formation of a smaller cube with no holes. It was suggested from this observation that the open hole formation is not driven by the solvent etching mechanism, but rather the growth of open hole cubes involves a two-step process including a solid core formation at the first step followed by slow growth to the final open hole cube formation. In the second step, concentration depletion and the different reactivity of the corner, as well as the edges, play important roles to form such a uniform open hole cube. This observation is in line with the formation mechanism of the closed hole cube. When the mesitylene/tertiary butyl alcohol ratio is fixed at 1:2, the C70 concentration is below the critical concentration level to form the new core. Therefore, C70 molecules tend to grow over each face of the open hole cube to form the closed hole cube. 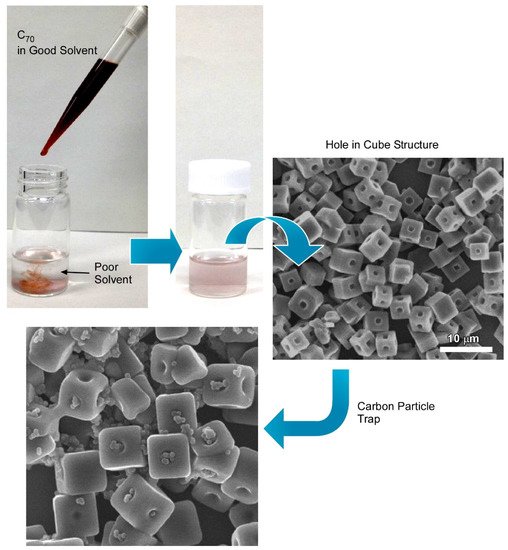 Figure 5. Fabrication of C70 cube with open hole on each face of the cube (hole-in-cube structure) through controlled self-assembly at the liquid–liquid interface and trapping capability for carbon particles. Reprinted with permission from Reference [39]. Copyright 2017 American Chemical Society.

Recently, Tang et al. demonstrated the fabrication of fullerene microstructures with a hollow framework from a mixture of C60 and C70 based on the dynamic liquid–liquid interfacial precipitation method (Figure 6) [40]. Additionally, considering the different crystalline phases and solubility of C60 and C70 and precise solvent engineering, they can transform the microstructure into unique conical-shaped fullerene microhorns. A C60 and C70 fullerene mixture with a 4:1 volume ratio was used in mesitylene as a good solvent. A mixed fullerene microtube was fabricated by the dynamic liquid–liquid interfacial precipitation method using tertiary butyl alcohol as a poor solvent. The overall reaction was very fast and completed in a few seconds after the addition of the fullerene fixture into the poor solvent. Details analysis suggests that the mixing ratio of fullerene C60 and C70 plays an important role to control the formation of the microtube. Interestingly, the microtube formation of fullerene C70 is not possible due to their crystal packing. However, with the help of fullerene C60, fullerene C70 was forced to form the microtube through hexagonal closed packing. Fullerene microtube-to-microhorn transformation was accomplished by precise solvent engineering. Then, a mesitylene/tertiary butyl alcohol (volume ratio of 1:3) solvent mixture was used to wash the microtube to form the perfectly homogeneous microhorn. Interestingly, there was no change in crystallinity of the microhorn, which suggests that the process of such morphological transformation is fully dominated by the physical changes. Additionally, such solvent engineering helps us to generate a nanoporous architecture inside the microhorn. 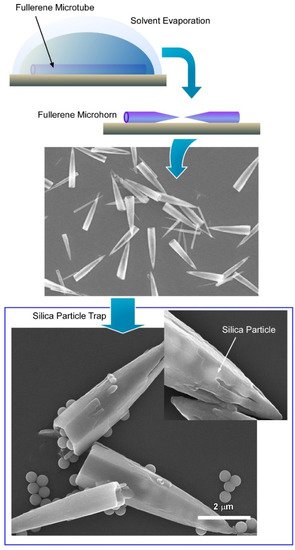 During the last three decades, researchers have given enormous efforts to finding suitable mesoporous materials for charge storage applications [42][43][44]. Carbon-based materials with mesoporous architectures are supposed to be the best materials for such charge storage properties [45][46][47]. However, unwanted surface functionality and poor electrochemical conductivity of such carbon materials have to be addressed to improve their performance. Fullerene C60 or C70 is a π-conjugated molecule and readily self-assembles to form a homogeneous shape-controlled microstructure. Recently, researchers have focused on these dimensionally-controlled fullerene assemblies as an exceptional source of π-electron-rich carbon materials. Such extended conjugated π-systems with high surface areas and mesoporous frameworks will be advantageous for energy storage applications such as supercapacitors, battery, etc. [48][49][50].
Bairi et al. demonstrated the direct transformation of porous crystalline fullerene C70 cubes into mesoporous carbon cubes that possess a very high specific surface area [51]. Synthesis of a porous crystalline C70 cube was done by the liquid–liquid interfacial precipitation method followed by mild heat treatment at 70 °C. XRD and TEM analysis confirmed the crystalline framework of the C70 cube. Conversion of porous crystalline fullerene C70 cubes to high surface area mesoporous carbon cubes was performed by high-temperature heat treatment (900 °C) under a continuous flow of N2 gas in a tube furnace. A nitrogen adsorption isotherm confirmed the formation of a mesoporous architecture with a narrow pore size distribution. The Brunauer–Emmett–Teller surface area of the mesoporous carbon cube was very high at ca. 642.6 m2 g−1, which is almost 14 times higher than that of the porous crystalline fullerene cube (ca. 47.7 m2 g−1). Therefore, high-temperature heat treatment is an essential step for such a large improvement of specific surface area. Pore size analysis by Barrett–Joyner–Halenda and the non-local density functional theory method confirmed the presence of both micropores and mesopores. The average pore size of the obtained carbon cube was 3.44 nm with a high pore volume of 0.367 cm3 g−1. XRD and Raman analysis of the obtained carbon cube confirmed the graphitic nature of carbon.

Electrochemical charge storage is highly dependent on the effective surface area accessible to the electrolyte ions. Therefore, it is very important to change the morphology of the fullerene-derived carbon to obtain maximum charge storage capacity. Here, fullerenes offer a great opportunity, as they can form almost any kind of morphology starting from one-dimensional rod to two-dimensional sheet to three-dimensional cube through the supramolecular assembly. Studies on charge storage mechanisms suggest that the sheet-like structure shows great performance.
Recently, Tang, et al. reported a novel method for fabrication of two-dimensional fullerene microbelts, which can be transferred to mesoporous carbon with the retention of their original sheet-like structure (Figure 7) [52]. 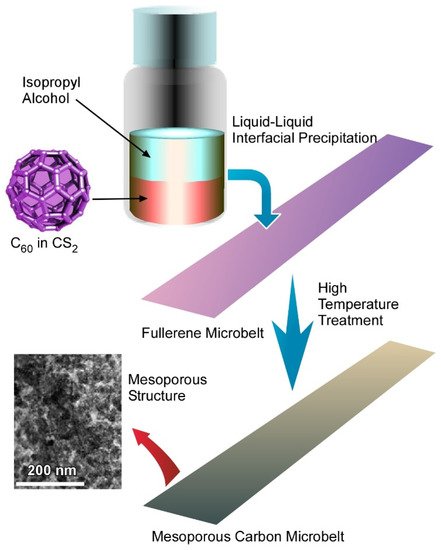 Figure 7. Fabrication of two-dimensional fullerene microbelts through transformation of fullerene assembly to mesoporous carbon with retention of their original sheet-like structure. Reprinted with permission from Reference [52]. Copyright 2017 American Chemical Society.