Ruthenium(Ru)-complexes go beyond the limitations of Platinum(Pt)-based drugs, notably oxaliplatin, and exhibit higher potency while offering less toxicity in colorectal cancer (CRC) treatment. Therefore, Ru-complexes can be a promising alternative to oxaliplatin in CRC treatment.

Colorectal cancer (CRC) is a type of malignant neoplasm of the colon or rectum epithelial cell lining [1][2], which is recognized as the third most prevalent cancer worldwide and is the fourth leading cause of death [3][4]. It also accounts for about 10% of all yearly diagnosed cancers and cancer-related deaths globally [5]. Moreover, CRC has been documented as the second and third most common cancer in women and men, respectively [5][6]. CRC occurrence rate is high in most of the developed countries, whereas the rate is increasing rapidly in developing countries [6]. In 2020, more than 1.9 million individuals were estimated to be diagnosed, where 935,000 individuals would die among the CRC-diagnosed patients [7]. About 2.5 million people are predicted to be diagnosed with CRC by 2035 [5].
The conventional treatment strategies of CRC consist of surgical resection, radiation, and chemotherapy, which may extend the survival rate by only five years in 90% of stage I patients to 10% of stage IV patients [8][9]. Even though surgery has been an integral part of CRC treatment, it comes out with post-operative complications such as occurrence or acceleration in recurrence of tumor cells and/or development of liver metastasis [8]. Long-term use of chemotherapeutics and radiation induces peripheral neuropathy [10] and bowel dysfunction accompanied by increased frequency and urgency problems [11]. The limitations of the existing treatment strategies encourage researchers to develop effective therapeutic alternatives.
Over the past few decades, transition metal-based compounds have been extensively used in the anticancer medicinal chemistry area [12][13][14][15]. Platinum (Pt)-based medications such as cisplatin (CIS) and its analogs carboplatin (CAR) and oxaliplatin (OXA) (Figure 1) have been used worldwide in cancer treatment [16]. Additionally, some other Pt-based drugs, for example, miriplatin (Japan), nedaplatin (Japan), lobaplatin (China), and heptaplatin (Korea) (Figure 1) are used regionally in cancer treatment (Figure 1) [17]. However, only OXA has been approved by the Food and Drug Administration (FDA) in CRC treatment [18] and stands out as the first-line therapy against CRC [19]. Despite being highly efficient, OXA has severe side effects [20] and drug resistance [21]. Such limitations inspire the search for alternative metal-based anticancer drugs.

Figure 1. Chemical structure of some Pt-based drugs. Cisplatin, Oxaliplatin, Carboplatin, and Picoplatin have been used worldwide in cancer treatment. Besides, Nedaplatin, Lobaplatin, Heptaplatin, and Miriplatin have been using regionally. Among the Pt-based drugs, only Oxaliplatin is approved by FDA in CRC treatment.
Among other transition metals, ruthenium (Ru) is a better alternative to Pt [22]. Ru displays both early and late transition metal properties due to its central position in the second row of the transition metal series [22]. The 4d subshell of Ru is partially filled and it contains many valencies that enable Ru to form a wide range of complexes via π bond formation, which can perform as anticancer agents against various tumor cell lines [23]. Ru-complexes showed promising anti-proliferative activity in vitro, in vivo, and in chemical model systems [24][25][26]. Moreover, the Ru-complex showed synergistic activity when combined with established anticancer agents and drugs [25][27]. Furthermore, Ru-complexes are widely used as phototherapeutic agents, biomolecular probes, and bioimaging reagents [28]. Luminescent Ru-complexes can differentiate DNA structures and have the potential to be used as molecular light switches for DNA [29]. Additionally, Ru nanoparticles (RuNPs) can be used as a cancer theranostic agent for the early diagnosis and treatment of CRC [30][31]. Nanostructured Ru-complexes offer improved anticancer activity under their targeted drug delivery and reduced side effects [32].

Colorectal cancer is caused by chromosomal instability, microsatellite instability (MSI), and the CpG island methylator phenotype (CIMP), which may occur alone or in combination [33][34]. Chromosomal instability is responsible for most of the genetic instability in CRC, which is characterized by significant gain or loss of entire or large portions of chromosomes [33]. The chromosomal instability pathway starts with the mutation of the APC gene, followed by the mutation of oncogene KRAS and inactivation of tumor suppressor gene, TP53 [35]. The CIMP pathway is involved in hypermethylation of the promoter region of tumor suppressor genes, mostly MGMT and MLH1. However, this hypermethylation is linked to BRAF mutation and MSI [36]. The MSI pathway refers to the inactivation of DNA mismatch repair genes through genetic alteration in short repeated sequences and hypermethylation of these mismatch repair genes. The MSI pathway is often found to be connected to the CIMP pathway [34].
Several genes have been mutated to induce CRC; Figure 2 shows the ten most frequent genes according to the cBioPortal database (https://www.cbioportal.org/, accessed on 15 July 2021) [37][38] that calculated published data on CRC [39][40][41][42][43][44][45]. Mutations of these genes could be linked with survival, CRC progression, and therapeutic outcome. 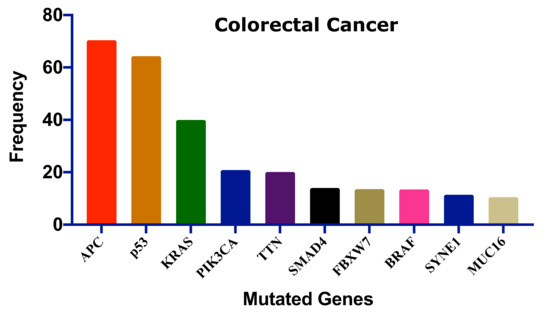 Figure 2. The ten most frequent mutations in colorectal cancer. This frequency distribution was calculated based on the cBioPortal data on 2322 CRC patients [46]. Adenomatous polyposis coli: APC, Tumor protein p53: p53, Kirsten rat sarcoma: KRAS, Phosphatidylinositol-4,5-Bisphosphate 3-Kinase catalytic subunit alpha: PIK3CA, Titin: TTN, SMAD family member 4: SMAD4, F-Box and WD repeat domain containing 7: FBXW7, B-Raf proto-oncogene: BRAF, Spectrin repeats containing nuclear envelope protein 1: SYNE1, Mucin 16: MUC16.
Pt-based drugs are used in the treatment of various types of cancers including CRC [47]. Although Pt-based drugs have been playing a pivotal role as anticancer drugs, some irresistible drawbacks limit their use in cancer treatment. Like other conventional chemotherapeutic drugs, Pt-based drugs including CIS, OXA, and CAR display poor cancer cells’ selectivity index [48][49][50]. Due to low selectivity, patients often experience drug-induced complications, some of which are fatal [51].
Among the Pt-based drugs, only OXA has been used in the treatment of CRC. OXA in combination with leucovorin (LEU) and 5-FLU (FOLFOX) is administered in adjuvant or neoadjuvant treatment of CRC. However, the co-treatment increases all grades of anemia significantly compared to the individual treatment with LEU and 5-FLU [52]. Furthermore, OXA induced several side effects in CRC treatment including peripheral neuropathy, fatigue, diarrhea, nausea, and stomatitis [53][54]. Acute and chronic neurosensory symptoms are also observed after OXA treatment [55]. Additionally, OXA mediates neutropenia, the most common serious hematological toxicity, in CRC patients [53]. Besides, continued use of OXA develops hypersensitivity reactions (type-I or IgE mediated reactions) in 10% of patients which is characterized by pruritus, flushing, urticarial, hypotension, and possible angioedema of the larynx, face, and/or extremities [54]. Moreover, OXA is reported to induce hepatic sinusoidal injury in CRC patients [56] as well as enlargement of spleen size in stage II or III CRC which are the potential cause of persistent thrombocytopenia [57].

Among numerous transition elements, Ru is found to be the best alternative to Pt [12][22][58]. The advantages of using Ru over Pt include lower toxicity, a broader range of oxidation states (2+, 3+, and 4+), a slow rate of ligand exchange, and the ability to mimic iron that facilitates its binding to human serum transferrin and other proteins [59][60]. Ru offers octahedral coordination geometry instead of square-planar geometry of Pt(II) complexes which provide a different mode of action and reactivity than CIS [61]. Furthermore, compared to typical Pt-based drugs, many Ru-based compounds have better water solubility in the biological environment, resulting in improved effectiveness against Pt-drug resistant tumor cells [62]. This increase in water solubility may aid in balancing the hydrophilicity and hydrophobicity of Ru-complexes, resulting in increased absorption in cancer cells [63][64].
Ru(IV) is unstable because of the higher oxidation state. This limits the antitumor effects and further development of Ru(IV)-complexes [65]. Nevertheless, Ru(II) and Ru(III) have antitumor activity [66]. Ru(III)-complexes possess stable thermodynamics and kinetics and are efficient in acting as a prodrug to work under hypoxic and acidic conditions [67]. However, Ru(III) is considered to be more inert than Ru(II), which might be due to a higher effective nuclear charge [68]. Thus, Ru(II)-complexes are more reactive than Ru(III)-complexes [69]. Ru(III)-complexes are reduced to the more active form, Ru(II), by the “activation by reduction” mechanism [70]. This mechanism is influenced by cellular reducing agents such as ascorbate, glutathione, and hypoxic tumor microenvironment [23][71]. Reduction of Ru(III) to Ru(II) enervates π bond with donor ligand and elevates ligand substitution rates [23]. However, the “activation by reduction” hypothesis is still a controversial issue, as some Ru(III)-complexes remained at 3+ oxidation state after 24 h of intravenous administration [72].