Subjects: Others
View times: 7
Submitted by:

Bioprinting involves the spatial patterning of living cells and other biologics by stacking them using a computer-aided layer-by-layer deposition approach to fabricate living tissue-like constructs. It has the ability to create channels that have features with complex design and is a one-step fabrication process. In addition, it has the potential to be fully automated, maintain accuracy, and be replicated with relative ease.

The development of new drugs usually takes place in phases over an extended period of time and is an expensive process [1]. A typical drug development process involves four phases before FDA review and approval [2]. In the first phase, drugs are tested in vitro, i.e., the testing occurs using cells or biological materials outside of a living animal. If initial testing is successful, the drug is then investigated in vivo, i.e., using living animal models. However, approximately half of the drugs that pass the first phase fail in later phases [3]. One cause for this high failure rate is that in vitro models are not always able to accurately represent interactions between the drug and the biological environment [4]. Another cause is that standard in vivo animal models often misrepresent the human physiology.

An organ-on-chip system is a microfabricated multichannel 3D microfluidic structure that emulates specific functions of human organs [2][3][4]. Increased specificity of organ-on-chip systems is accomplished by using dynamic fluid flow to provide nutrition and oxygenation with tissue-specific environmental cues and molecular gradients [4][5][6][7][8]. It is foreseen that use of such sophisticated organ-on-chip systems for modeling the activities, mechanics, and physiological responses of human tissues and organs will allow for inexpensive and faster testing of new therapeutic drugs compared with use of traditional in vitro and in vivo animal models [9].

Micro-fabrication methods, including soft-lithography and photolithography, are traditionally used to fabricate organ-on-chip systems [10][11]. In soft lithography, an elastomeric stamp with patterned relief structures on its surface is used to generate patterns and structures (also known as a mold) with feature sizes ranging from 30 nm to 100 µm. Polydimethylsiloxane (PDMS) is then poured into the mold to create a closed-circuit channel sealed with glass slide [10]. In photolithography, a silicon wafer is covered by photoresist material, and ultraviolet (UV) light removes the photoresist material from some portions of the wafer surface. Then, some silicon is etched away from the portions of the wafer not covered with the photoresist material, to create a mold. PDMS is then poured into this mold, to create a closed-circuit channel sealed with a glass slide [11]. However, these methods are expensive and time-consuming [7]. In addition, these methods suffer from limited availability of compatible biological materials [12].

Bioprinting involves the spatial patterning of living cells and other biologics by stacking them using a computer-aided layer-by-layer deposition approach to fabricate living tissue-like constructs [13]. It has the ability to create channels that have features with complex design and is a one-step fabrication process. In addition, it has the potential to be fully automated, maintain accuracy, and be replicated with relative ease [14]. In recent years, bioprinting has been used to produce organ-on-chip systems [15][16]. 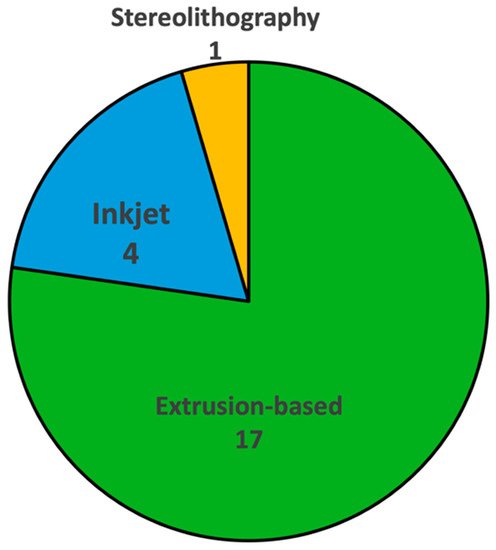 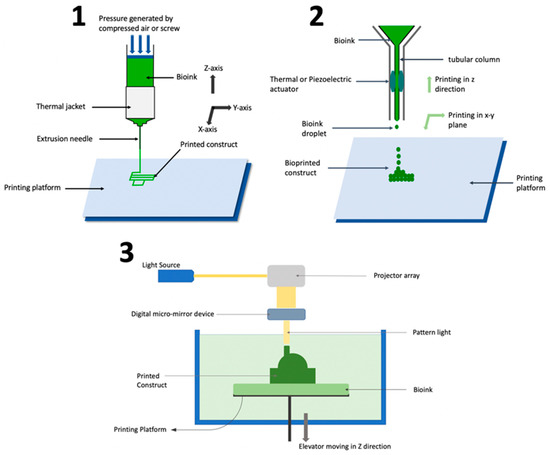 The extrusion-based process is capable of printing a wide array of biomaterials, including composite bioinks that are comparable to natural tissue [17], and therefore is suitable for fabricating organ-on-chip systems that involve several different types of tissues and extracellular matrix components [18]. In addition, the extrusion-based process usually has higher printing speed than other bioprinting processes [13]. Furthermore, the relative simplicity of the technology enables ease-of-use for researchers across disciplines [13]. However, the extrusion-based process has drawbacks such as limited resolution [19], nozzle clogging [20][21], and lower cell viability [22]. Extrusion-based bioprinting process parameters need to be optimized to balance shape fidelity and cell viability. Smaller needle diameters increase the shape fidelity of printed constructs [23] but are harmful to cells due to increased shear stress [24][25]. Increased extrusion pressure is required to print bioinks of high viscosity [20], but this also harms cells through increased shear stress [24][25]. Different cell types have different sensitivities to shear stress [26][27], so the optimization of process parameters depends on the biomaterials used during printing.

In inkjet bioprinting, droplets of bioink are formed through vaporization and dispensed (through an extruder controlled by an actuator) onto a platform in a layer-by-layer fashion to fabricate a 3D construct [28][29][30]. The actuator can have thermal [31] or piezo-electric [32][33] modality for actuation. The extruder can move in the x-y-z directions for fabrication as per the CAD design. However, in certain printers, the extruder is fixed while the printing platform moves in the x-y-z directions.

In inkjet printing, the main printing parameter that can be controlled is droplet size, which is governed by the actuator’s modality. Inkjet bioprinting offers a high resolution (~30 µm) which makes it suitable for fabricating organ-on-chip systems which are in sizes of hundred microns or less [34][35]. In addition, constructs printed with inkjet bioprinting offer high cell viability [34][36]. However, inkjet bioprinting is only suitable for bioinks with low viscosity (~0.1 Pa·s) [37], and the shape fidelity of vertical constructs are poorer with inkjet printing than other bioprinting techniques [34]. Because of these factors, the application of inkjet printing is limited in fabricating organ-on-chip systems that contain tissue types and biomaterials of higher viscosity.

In the bioprinting process, from an organ-on-chip fabrication perspective, the bioink formulation needs to satisfy certain physical and biological requirements [38]. The primary biological requirement is that the bioink needs to be biocompatible, which means that it should not be toxic to the cells and should not alter the functionality or physiology of the cells [28]. The second biological requirement is biomimicry, i.e., bioink should mimic the extracellular matrix so that cells can proliferate [39]. Physical properties that the bioink should include are shear-thinning behavior, defined as a non-linear increase in viscosity as stress is applied, and structural fidelity. Shear-thinning behavior is necessary for the bioink to be printable [40]. Bioink also needs to have suitable mechanical properties so that the printed construct is stable [41].

Unique properties of hydrogels make them ideal candidates [42] as bioink constituents. Hydrogels are three dimensional molecules composed of hydrophilic chains which are formed by cross-linking of polymer chains in an aqueous medium through various mechanisms such as physical crosslinking, chemical crosslinking, and photo crosslinking [43]. Crosslinking mechanisms have distinct advantages and disadvantages. Photo crosslinked constructs have high shape fidelity, but the UV light used during photo crosslinking can create free radicals which are harmful to cells [44]. Ionic crosslinking, a common form of physical crosslinking, forms mechanically weaker constructs than chemical crosslinking, but promotes higher cell viability [45]. Hydrogels have the ability to absorb water up to a thousand times their dry weight, which makes them suitable materials to act as extracellular matrix and support cell proliferation. The reviewed studies have used natural hydrogels like alginate, gelatin, cellulose, fibrin, and collagen, and synthetic hydrogels such as poly (ethylene glycol) (PEG), poly (ɛ-caprolactone) (PCL), pluronic, and gelatin methacryloyl (GelMA) as shown in Table 1 .

In a similar study, Abudupataer et al. used extrusion-based bioprinting to fabricate a vessel-on-chip system [57]. Two layers of bioink containing endothelial cells and muscle cells were printed on chip (fabricated with PDMA), and after the cells proliferated, a continuous flow of growth medium was perfused in the channel of the chip to mimic blood flow in the vessel. Such a vessel-on-chip model can be used to study the pathogenesis of disease and drug screening.

Cancer is an umbrella term for a variety of diseases having the same underlying cause of unregulated division of cells, which can be a cause of morbidity and mortality. Cancer treatment is especially challenging due to different tumor characteristics (mass of tissue caused by unregulated division of cells) in different patients. Tumor-on-chip systems tackle this heterogeneity by enabling the development of patient-specific anti-cancer drugs targeted to treat the patient-specific tumor.

Mi et al. used inkjet bioprinting to fabricate a breast tumor-on-chip system [61]. Breast cancer cells and endothelial cells were printed on a PDMS chip (fabricated with soft-lithography). Post printing, the cells showed good cell viability and cell quality. A significant inhibition of tumor cell migration ability was observed when treated with paclitaxel (anti-cancer drug), demonstrating the effectiveness of such a tumor-on-chip system in aiding cancer research and for anti-cancer drug screening. Successful cell proliferation and cell integration in co-culture showed that such a co-culture tumors-on-chip system is viable for biological characterization.

Cheng et al. used extrusion-based bioprinting to print paper-based cancer tissue models which have the potential for application in the cost-effective fabrication of organ-on-chip models [52]. In this study, sacrificial petroleum jelly-liquid paraffin ink was used to print on bacterial cellulose hydrogel, the entire matrix was air-dried to form a paper-like membrane, and perfusable microchannels were obtained by removing the sacrificial ink using heat. The epithelial cells were seeded into the microchannels and cancer cells were seeded onto the surface of the paper-based device. It was observed that endothelial cells and tumor cells spread and proliferated, and cytotoxicity of cancer cells was observed on treatment with tamoxifen (anti-cancer drug), demonstrating that such paper-based models can possibly be used for producing tumor-on-chip systems for drug screening.