Preoperative anemia is a risk predictor of perioperative transfusion of allogeneic blood products, which carries a significant risk of adverse events and mortality. In critically ill and surgical patients, transfusion of a single unit of packedred blood cells increased the multivariate risk of mortality, wound problems, pulmonary complications, postoperative renal dysfunction, systemic sepsis, composite morbidity, and prolonged postoperative LoS compared to propensity-matched patients who did not receive intraoperative allogeneic blood transfusion (ABT). Further concerns have been raised that ABT is associated with recurrence in cancer surgery.

Anemia is a frequent condition among patients undergoing surgery for peripheral arterial disease (PAD) [1]. The World Health Organization defines anemia as a hemoglobin (Hb) level < 13 g/dL in men and <12 g/dL in women [2]. Anemia has multifactorial causes, including iron deficiency, vitamin deficiency, inflammation, and chronic kidney disease [3]. There is an association between preoperative anemia and adverse clinical outcomes, such as prolonged hospital length of stay and death [4][5]. However, preoperative anemia is frequently unrecognized as a risk factor and, therefore, not corrected before surgical procedures, particularly those associated with major bleeding.

Peripheral arterial disease has been reported to affect more than 200 million individuals worldwide [6], and perioperative data from these patients have demonstrated anemia prevalence rates ranging from 47 to 75% [1][2][3]. Thus, anemia is a significant problem for the healthcare system, and literature is scant regarding the impact of adequate treatment of anemia during the perioperative period in peripheral vascular surgical patients.

Patients with symptomatic PAD and critical limb ischemia (CLI) have an increased risk of death and cardiovascular events. Advances in medical, surgical, and endovascular techniques have improved these patients’ outcomes; however, an optimal management paradigm has not been established [7]. A large retrospective study demonstrated that anemia’s prevalence is high among patients undergoing percutaneous peripheral vascular intervention (PVI) and is associated with a significantly greater likelihood of amputation, adverse events, and major cardiovascular complications [8].

Patient Blood Management (PBM) program is a patient-centered interdisciplinary with the timely application of evidence-based medical and surgical concepts designed to maintain hemoglobin concentration, optimize hemostasis and minimize blood loss [9]. Strategies to improve anemia, such as PBM programs, are associated to improved outcomes in various surgical settings [9]. It remains to be determined whether the preoperative clinical optimization of anemic patients can decrease post-PVI adverse events [8][10].

reoperative anemia in patients subjected to peripheral vascular surgery confers an increased risk of perioperative blood transfusion, limb amputation, and death. Low levels of Hb in the postoperative period increase the risk of the composite of mortality or major ischemic events. These findings agree with data from studies investigating the association between anemia and adverse outcomes in other surgical specialties, such as orthopedics and major surgery [11][12][13]. Preoperative anemia and perioperative allogeneic blood transfusion (ABT) were independent risk factors for postoperative mortality, ischemia, and infections.

Preoperative anemia is a risk predictor of perioperative transfusion of allogeneic blood products, which carries a significant risk of adverse events and mortality [14][15]. In critically ill and surgical patients, transfusion of a single unit of packed [14][15] red blood cells increased the multivariate risk of mortality, wound problems, pulmonary complications, postoperative renal dysfunction, systemic sepsis, composite morbidity, and prolonged postoperative LoS compared to propensity-matched patients who did not receive intraoperative ABT (Figure 2). Further concerns have been raised that ABT is associated with recurrence in cancer surgery [5]. Data from an observational cohort of 2,087,423 primary total hip arthroplasties showed that ABT was independently associated with an extended length of hospital stay, increased costs, and worse surgical and medical outcomes without affecting the in-hospital mortality rate. Moreover, the adverse effects of blood loss, ABT, and preoperative anemia are synergistic [5]. Orthopedic patients, similarly to vascular disease patients, are, to a great extent, a frail population. They both present a similar array of comorbidities, and therefore, this interesting correlation of worse outcomes and anemia is clearly evident across both our systematic review and Munõz’s observational study [5]. 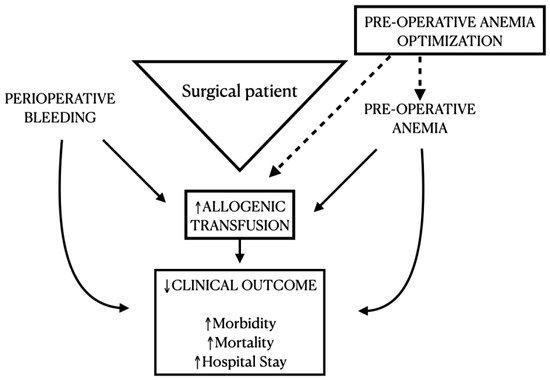 Figure 2. Effects of anemia, bleeding, and allogeneic transfusion on clinical outcomes in patients undergoing major surgery. Preoperative anemia optimization may have positive effects (dashed line). Adapted from Muñoz et al. [2].
The European Society of Anaesthesiology recommends that patients at risk of bleeding should be assessed for anemia 3–8 weeks before surgery. Although it is possible to investigate and address anemia preoperatively, it should be noted that many surgical patients require urgent intervention. Therefore, the time available for the assessment and correction of anemia is limited at times [14][15]. Anemia prevalence due to iron or vitamin deficiency among patients with critical limb ischemia is high. Therefore, we recommend a systematic approach in preoperative management to measure biomarkers of iron deficiencies, such as ferritin, transferrin saturation, iron, iron-binding capacity, vitamin B12, and folate. The cause of anemia should be assessed and treated before the intervention, and therefore, blood transfusion might be minimized [16][17]. Advances in pharmaceutical technologies results newer iron formulations, which in turn decrease problems inherent with traditional approaches [18]. New oral preparations as effective as standard ferrous sulfate, but better tolerated, are in active research. In other hand, new preparations have entered the clinical scenario, which can be collectively named as “third generation” IV iron compounds. These preparations share common technical features conferring superiority over the older products, allowing giving the total replacement dose (usually 1–1.5 g) in just one or two infusions [18].
A study from Diez [19] is ongoing, and its results can clarify certain aspects of anemia optimization and clinical outcomes in endovascular or vascular patients. This trial is measuring outcomes (red blood cell requirements, changes, and evolution of hemoglobin, establishing the optimal preoperative timing for intravenous iron administration to yield the ideal increase in Hb; the impact of anemia and its treatment on the length of hospital stay, morbidity, mortality, and quality of life) in anemic patients with chronic lower limb ischemia. These patients will undergo endovascular or open surgical techniques, and revascularization surgery scheduled ≥ 1 week from the inclusion data. The intervention group receives a single dose of carboxymaltose (1000 mg intravenously) 1 week before surgery. The control group receives standard care or oral iron in severe iron-deficiency anemia at the time of hospital admission. Chau et al., in a partial publication, investigated the impact of intravenous iron treatment in anemic patients undergoing cardiac and vascular surgeries, and valuable information can be yielded from their study [20].

Screening and clinical evaluation of anemia should be considered a key objective in patients with peripheral arterial vascular disease during the preoperative period. Preoperative anemia, blood transfusion requirement, and adverse outcomes have a strong association in this setting. Thus, large multicenter randomized controlled trials are necessary to provide consistent evidence about anemia correction in patients with peripheral vascular disease submitted to percutaneous vascular interventions