Industries such as pulp and paper, textile, cement, oil, leather, paint, food, among others, normally produce a massive amount of sludge and effluents [1][2][3][4]. Such wastes generally contain several environmental contaminants, which may affect environmental and human health [5][6]. Such effluents and sludges containing high levels of chemical oxygen demand (COD), biochemical oxygen demand (BOD), and the presence of recalcitrant environmental pollutants such as adsorbable organic halides (AOX), which are highly toxic for the environment [1][3][7][8][9].

The growth of industrialization and the discharges of the produced industrial effluents are some of the main sources of air, land, and water pollution [10][11]. Thus, environmental risk assessment procedures play a major role in evaluating the effects of the discharged industrial effluents on aquatic organisms, which are highly at risk due to discharge levels that may represent high pollution levels of natural resources [2]. The use of ecotoxicology assays for monitoring the efficiency of the treatment technologies and detoxification of industrial wastewaters has been applied in many studies [2][12]. However, there is still a lack of information on the toxicity characteristics of various industrial effluents.

Dealing with such high toxic effluents has been a subject of various studies worldwide. However, the number of reports in the literature for an effective application of novel and efficient methods to deal with this problem in real-scale applications are rare due to existing barriers such as the treatment costs and the need for high-tech equipment [1][2][7]. Due to this fact, the toxicity of the effluents released from industrial activities has continued to be a significant problem worldwide, especially in developing countries [13][14]. In this situation, in-depth knowledge of the industrial effluents’ real effects on the surrounding environment may help industries and scientific communities to develop a more efficient and cost-effective solution to deal with industrial effluents and sludge [9][15].

Despite the high-quality studies published in the literature, to the best of our knowledge, there are no scientometric studies performed regarding the ecotoxicological assessments of the real industrial effluents so far. Hence, this study aimed at providing scientometric aspects of industrial effluents toxicity followed by a critical discussion on the results and the aspects to be focused on for the future in order to diminish the drawbacks attributed to the production and release of highly polluted industrial effluents and sludge on the receiving ecosystems.

This study focuses on a scientometric analysis of industrial effluent and sludge toxicity to visualize and analyse the available documents in this regard. All studied documents have been obtained from the Web of Science (WoS) core collection platform (© 2020 Clarivate Analytics), which also covered most Institute for Scientific Information (ISI) publications from various core journals and is the universal database for ISI publications [16][17]. Hence, 1038 documents collected from WoS were analysed with CiteSpace program (Visualizing Patterns and Trends in Scientific Literature) and also WoS analysis (provided by (© 2020 Clarivate Analytics). The following keywords have been searched to assess all publications in this regard: * indust * or mill * or * factory * and effluent * or waste water * or wastewater * or waste * or sludge or landfill * or leachate * or release * or fate * or discharge or influent * and * toxic * or mutagen * or detoxif * or lethal. A fuzzy search has been applied with “*” and we did not apply any predefined specific duration of time to find out all publications. No limited duration was considered since the number of retrieved documents with the applied keywords was scarce. In this way, the utilized database was equipped with the opportunity to provide all the documents published at any time in the past. The performed research design is presented in Figure 1 . There are four parameters for the scientometric analysis; (1) centrality: this parameter represents the significance of any data. Whenever any types of data, such as a keyword or author name, are located in the centre of the figure, that data is of high importance; (2) burst: this parameter is a tool to measure the frequency of the appearance of any type of data, whether a keyword or an author, over a specific and short duration of time; (3) sigma: this is an integrated measurement in CiteSpace software, which demonstrates the combination of both the citation and the burst of any type of data, whether a keyword or an author’s name; (4) clustering: this is a measurement of the data by categorizing the information based on the similarly utilized keywords. According to the size of the category, each cluster gains a size. The largest cluster containing the most homogenous data is demonstrated by #0 [18]. 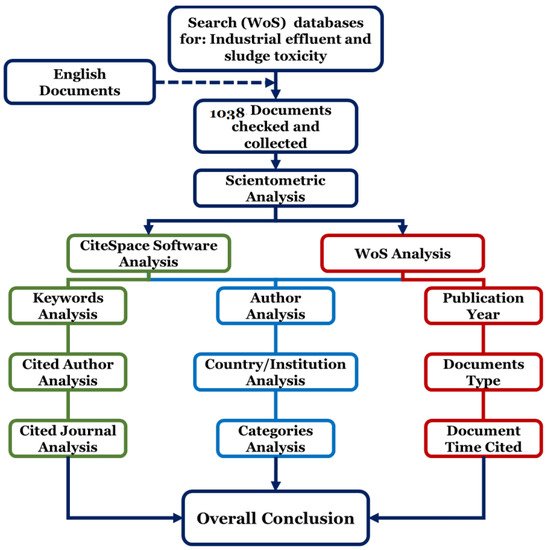 Figure 1. Research design used in the scientometric study performed for industrial effluent and sludge toxicity. To initiate this analysis’s execution, primarily, the search details, such as the pre-analyzed keywords and the English language, were inserted in the advanced search mode of WoS (shown with dark blue). Then, the obtained articles were separately analyzed via CiteSpace software (show in green), WoS analysis (shown in red), and the joint analysis of both analyzers (shown in light blue) regarding the scientometric criteria. Thereafter, conclusions were drawn based on the obtained results.

The results obtained from the search of the keywords mentioned above in WoS have been furthered analysed based on the type of published documents. Accordingly, the results indicate that most of the scientific documents in the field of toxicity analysis on industrial wastewater have been published as articles with an overall portion of 77%. Furthermore, proceeding papers (with a portion of 13%) and meeting abstracts (with the portion of 4%) were observed to include the highest types of published documents in this field ( Figure 2 ). 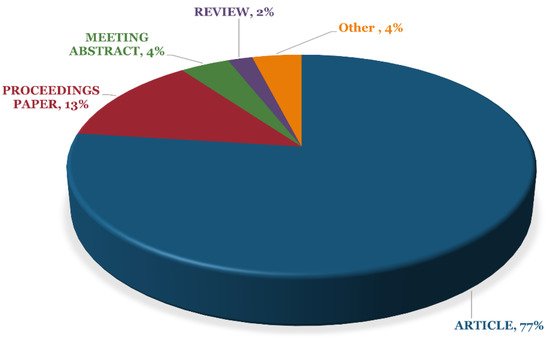 Figure 2. The obtained results demonstrating the types of published scientific documents on toxicity analysis on industrial wastewater during the adopted period (1950–2020) gathered from WoS.

The chosen documents in the field of toxicity analysis of industrial effluents in WoS were further examined based on the most displayed keywords via CiteSpace software. The results achieved from this analysis demonstrate the keyword “toxicity” with the frequency of 148 has appeared the most. Moreover, according to the timeline of the appeared keywords, Figure 3 shows that the keyword “toxicity” has appeared between the years 1990 and 1992 for the first time. Furthermore, the keywords “waste water” and “wastewater” have appeared more frequently compared to other keywords with the frequencies of 100 and 95, respectively. As the software cannot distinguish the difference in writing, the keywords “wastewater” and “waste water” have been considered two different keywords. The keyword “heavy metal” with the respective frequency of 83 has been categorized as the fourth keyword appearing the most.

Figure 3. The timeline of the keywords appears in the scientific documents published in the field of industrial effluent and sludge toxicity from 1950 to 2020 via the utilization of CiteSpace software.

The obtained scientific documents on the industrial effluent and sludge toxicity analysis from 1951 to 2020 were further examined based on the most cited journals. Figure 4 and Table 1 demonstrate the obtained results in this regard via the utilization of CiteSpace software. Based on the achieved results, the journals “Chemosphere” (frequency = 409 and burst = 0.55), “Water Research” (frequency = 406 and burst = 5.89), “Ecotoxicology and Environmental Safety” (frequency = 274 and burst = 2.41) and “Journal of hazardous material” (frequency = 264 and burst = 10.82) were identified to be the journals with the highest received citations. Moreover, as can be observed from Figure 4 b, the keywords clustering based on this analysis demonstrates 25 clusters with “industrial area” as the largest cluster (#0) with 208 members. 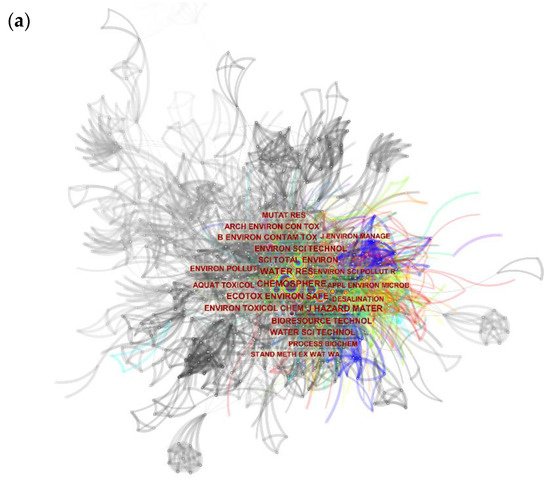 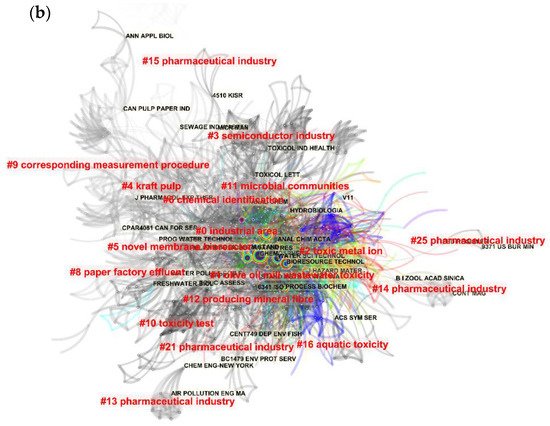 Industrial effluents and sludges are among the most critical sources of highly polluted and contaminated residues and can cause many environmental and ecological issues upon discharge to the environment. A comprehensive scientometric analysis has been carried out in this study to provide a clear understanding of the scientific efforts regarding the analysis of industrial effluents’ toxicity assessment. India and the USA accounted as the leading countries contributing the most in this regard by evaluating and analyzing the industrial effluent to avoid environmental contamination. These kinds of studies are accounted for as the result of the function of economic situations and policies. Therefore, the absence of effective regulations and standards regarding these types of effluents’ toxicity can be felt globally. However, it is inevitable that even with strict regulations, industries might not cooperate as effectively as they should due to high capital and monitoring costs. Thus, a need for more cooperation among the scientific and industrial bodies is felt to overcome the obstacle of monitoring and controlling effluents’ toxicity level before their discharge into the water media.