Dicarboxymethyl cellulose (DCMC) is a cellulose derivative prepared via heterogeneous catalysed etherification. The polymer is negatively charged at wine pH due to the presence of malonic groups, which makes it suitable for removing positively charged compounds such as dyes. DCMC has similar structure and properties to carboxymethyl cellulose (CMC), a compound commonly used for wine tartrate stabilization. CMC, having an acidic group with a pKa near 4.5, becomes mostly uncharged at a pH below 3.5, which is common in white wines, failing to promote ionic exchange and remove positively charged proteins. Nevertheless, the malonic carboxylate groups are more acidic than the one present in CMC and, consequently, more prone to be deprotonated at wine pH due to its first pKa (approx. 3).

One of the most prevalent causes of white wine haze occurs from the aggregation and denaturation of grape pathogenesis-related proteins, namely thaumatin-like (TLP) and chitinase proteins. The conditions associated with protein haze are the exposure of wines to high temperatures and long-term storage. To avoid this phenomenon, proteins are frequently removed through the negatively charged clay bentonite. Dicarboxymethyl cellulose (DCMC) can be a substitute for this non-renewable material.

Wine clarity is a critical aspect in the commercialization of white wines. The formation of wine haze can be attributed to the aggregation and precipitation of heat-unstable wine proteins. Bentonite fining is the commonly used method in winemaking for protein removal, but it is responsible for loss of wine volume and quality. Dicarboxymethyl cellulose (DCMC) was developed as a potential alternative to bentonite. Water-insoluble DCMC was prepared via catalysed heterogeneous etherification using sodium chloromalonate and potassium iodide. White wine fining trials were benchmarked with different dosages of DCMC against bentonite. A high-performance liquid chromatography method was optimized for protein quantification. The samples underwent heat stability tests to evaluate wine turbidity before and after fining. Results show that DCMC successfully reduced the wine protein content and turbidity. DCMC produced heat-stable wines with dosages higher than 0.25 g/L. The innovative application of DCMC in the wine sector shows potential due to its ability to stabilize white wines while overcoming problems associated with bentonite, such as lees production and loss of wine, contributing to a more sustainable process.

Dicarboxymethyl cellulose (DCMC) is a cellulose derivative prepared via heterogeneous etherification[1]. The polymer is negatively charged at wine pH due to the presence of malonic groups, which makes it suitable for removing positively charged compounds such as dyes. DCMC has similar structure and properties to carboxymethyl cellulose (CMC), a compound commonly used for wine tartrate stabilization. CMC, having an acidic group with a pKa near 4.5, becomes mostly uncharged at a pH below 3.5, which is common in white wines, failing to promote ionic exchange and remove positively charged proteins. Nevertheless, the malonic carboxylate groups are more acidic than the one present in CMC and, consequently, more prone to be deprotonated at wine pH due to its first pKa (approx. 3).
Bentonite is a negatively-charged clay at wine pH that binds to proteins positively charged at wine pH [2]. Though effective, bentonite presents several drawbacks that include lees formation, loss of wine, and stripping of natural aromas of the wine [3][4]. Bentonite is a non-specific fining agent, removing compounds besides proteins, which may directly affect the sensory qualities of the wine [4]. Nonetheless, it is still the predominant process used in the winemaking industry [3]. These drawbacks drive the search for new wine protein removal methods and materials. Several techniques and materials have been studied as alternatives to bentonite fining [2][5][6][7][8].

The effect of heating on the wine samples was investigated by performing a heat stability test (HST). Differences in wine turbidity (before and after the heat treatment) have been shown to correlate directly with wine protein instability [9]. In practical terms, a wine is considered unstable when the difference in absorbance between heated and unheated controls is higher than 0.02 absorbance units [10]. Following the HST, the control wine was considered unstable since the Δabs at 540 nm was of 0.23 ± 0.0011. The wine produced a significant amount of haze and was, therefore, considered heat-unstable.
The adsorption experiments were carried out by adding different amounts of dicarboxymethyl cellulose sodium salt or bentonite to the sample wine. The experiments were conducted in 15 mL falcons placed horizontally in an orbital shaker, since DCMC sediments easily and this display allows better contact between wine and DCMC. Figure 1 shows the result of the HST applied to the sample wine after contact with the stabilizing agents. The heat stability test provides information on the haze potential of the wine based on the turbidity data. A correlation between adsorbent concentration and wine haze is evident. With increasing dosages, the turbidity of the resulting wine is reduced. Based on the heat test, wines treated with all concentrations of DCMC 02 remained unstable, whereas wines treated with more than 0.25 g/L of DCMC 01 were stabilized. Bentonite fining required more than 0.5 g/L to stabilize the wine. The difference in adsorption capacity for the two DCMC samples can be explained by the number of carboxylate groups present on the polymer. Increasing the molar equivalents of the etherification agent increases the degree of substitution. An increase in the degree of substitution (DS of 0.03 and 0.01 for DCMC 1 and 2, respectively) allowed for a higher adsorption of positively charged wine proteins due to the increased availability of binding sites. Therefore, DCMC promoted wine stabilization as verified by the heat stability test. Contrarily to other methods described in the literature, DCMC can be used in very low doses and without heating the samples [2][7]. 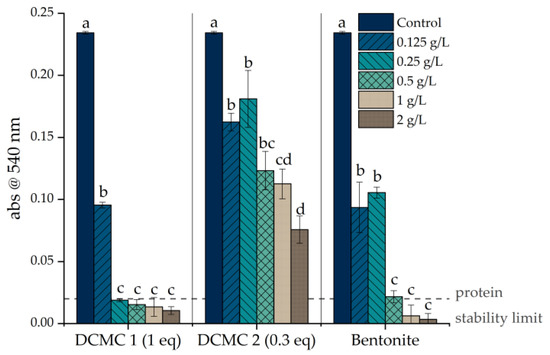 Figure 1. Heat stability test results of Primavera wine treated with DCMC 1, DCMC 2, and bentonite. Different letters represent significant differences among different homogeneous subsets for p = 0.05.
To understand the impact of the protein concentration in wine stability, total protein was quantified in both control and fined wines. To surpass some problems inherent to colorimetric methods applied to wines, namely failure to correctly estimate protein content with the Bradford assay and overestimation of protein content with Smith and Lowry assays [4], an HPLC protein quantification method was applied. A standard calibration curve was made using standard concentrations of thaumatin (from 15 to 250 mg/L) dissolved in water. Relative protein quantification of the wine samples was carried out by comparing the area of the peaks eluted from min 8 to min 11.5 and from min 18.5 to min 24.5 (for TLPs and chitinases, respectively) against the area of the thaumatin standard [11].
To determine which peaks in the wine chromatogram could be attributed to proteins, control wine samples were passed through a gel permeation chromatography column (PD-10) to remove all compounds smaller than 5 kDa. The majority of peaks disappeared after the gel permeation. Only the remaining peaks at 7.6 and 10 min were considered when calculating peak integration of the wines. Analysis of the control wine showed that it had a total concentration of 97.82 mg/L of TLPs and no proteins eluted after 12 min. For this reason, it was considered that the concentration of chitinases in this wine sample was negligible.
Following fining, the wines were analyzed by the same HPLC method. The concentrations of TLPs decreased with increasing adsorbent dosages, for both wines treated with DCMC and bentonite. The results show that, after treatment with the polymer (DCMC 01 and DCMC 02) and bentonite, the peak at min 9 was significantly reduced in all chromatograms. Fining induced a protein content reduction in the ranges of 72–75%, 57–66%, and 64–71% for wines treated with DCMC 1, DCMC 2, and bentonite, respectively. Figure 2 shows the HPLC chromatograms of the heat-stable wine fined with the minimum doses of DCMC 1 and bentonite (0.25 and 0.5 g/L, respectively).

Figure 2. HPLC chromatograms of Primavera wine and the same wine treated with 0.25 g/L of DCMC 1 and 0.5 g/L of bentonite.

DCMC sodium salt showed a high protein removal efficiency (up to 75% for DCMC 1 above 0.25 g/L of wine), reducing the haze formation of these wines. A minimum dosage of 0.25 g/L of DCMC was required to produce heat-stable wines. The results demonstrate that dicarboxymethyl cellulose can be used for white wine stabilization. DCMC produced heat-stable wine with low doses and without heating the samples. The HPLC protein quantification method was established for wine analysis, providing a fast and reliable method for protein quantification, and a correlation between protein instability and protein quantification was verified.