Gene editing has recently emerged as an innovative disease-modifying treatment alternative based on editing gene sequences or altering their expression profiles. Gene therapies have the potential to permanently fix the underlying causes of the disease, which is not yet possible for most neurodegenerative diseases. For more than two decades, site-directed genome editing has been possible using various molecules capable of recognizing and cleaving specific DNA sequences, such as zinc-finger nucleases and transcription activator-like effector nucleases (TALENs). Although these techniques represented the beginning of precise genome editing and its incursion into medical treatments, they are costly and challenging due to the complex nuclease design process. A major revolution in genome engineering came with discovering CRISPR/Cas systems and their direct application as gene-editing platforms in mammalian cells.

CRISPR is a simple and cost-efficient gene-editing technique that has become increasingly popular over the last decades. Various CRISPR/Cas-based applications have been developed to introduce changes in the genome and alter gene expression in diverse systems and tissues. These novel gene-editing techniques are particularly promising for investigating and treating neurodegenerative diseases, including Parkinson’s disease, for which we currently lack efficient disease-modifying treatment options. Gene therapy could thus provide treatment alternatives, revolutionizing our ability to treat this disease.

The advent of simpler, accessible, and less expensive genome editing technologies such as CRISPR-Cas9 has opened up immense possibilities for research into the genetic underpinnings of complex neurodegenerative diseases, such as Parkinson’s disease (PD), and the development of genetic therapies to treat them. PD is a complex and heterogeneous neurological disorder characterized by Parkinsonian motor symptoms (muscle rigidity, hypokinesia, tremors, and impaired gait) that progress in time, leading to more severe movement disorders as the disease progresses [1]. Moreover, PD can alter cognition, sleep patterns, and autonomous function, generally before motor symptoms appear [2]. PD symptoms are typically caused by a specific cellular process disfunction, such as the early death of dopaminergic neurons in the brain’s Substantia nigra pars compacta (SNpC). In general, cellular dysfunction and the death of dopaminergic neurons result from α-synuclein (α-syn) aggregation into Lewy bodies. It is now well understood that PD pathological hallmarks result from a complex interplay between genetic and environmental factors (idiopathic origin). Only in a minority of PD cases (approximately 10%), PD can be associated with genetic factors and runs in families (familial PD) [1][3][4][5]. These familial PD cases have been attributed to mutations in genes such as SNCA (encoding for α-syn), PRKN, PARK2, PINK1, and PARK7 genes.
Genes identified in studies of familial PD have become candidates of interest for potential therapeutic intervention [2][5][6]. Additionally, these genes have been the focus of studies to better understand the biological routes disrupted in cases of idiopathic PD, likely caused by a combination of complex multigenic components and environmental triggers [5][7]. Understanding the genes involved in developing familial and idiopathic forms of the disease could elucidate the functional routes altered in PD and potentially guide novel treatments.
Based on the cellular processes implicated in PD, multiple treatment options have been investigated. Treatment targets and strategies can be classified as non-disease-modifying or disease-modifying depending on whether they aim to ease the disease’s symptoms or treating its underlying causes. Available treatment options for PD include only non-disease-modifying ones, targeting the dopaminergic function to control symptoms, and slowing down the disease [8][9]. These therapies either increase dopamine concentration or stimulate the brain’s dopamine receptors [1]. Treatment options remain limited and can lead to serious adverse side effects, such as dyskinesias, insomnia, and hallucinations, and can lead to additional complications over long-term use [10]. These limitations have motivated significant efforts to develop disease-modifying therapies that could slow down or stop the underlying disease’s progression. Efforts have focused on understanding new pharmacological targets for disease-modifying treatments [2], including targets for gene therapy [6] and the use of novel techniques such as cell transplantation (e.g., stem cell therapies) [11] and surgical interventions required for the administration of treatments to the target brain’s cell populations [2].
Gene editing has recently emerged as an innovative disease-modifying treatment alternative based on editing gene sequences or altering their expression profiles [2][5][6]. Gene therapies have the potential to permanently fix the underlying causes of the disease, which is not yet possible for most neurodegenerative diseases [12][13][14]. For more than two decades, site-directed genome editing has been possible using various molecules capable of recognizing and cleaving specific DNA sequences, such as zinc-finger nucleases and transcription activator-like effector nucleases (TALENs) [15]. Although these techniques represented the beginning of precise genome editing and its incursion into medical treatments, they are costly and challenging due to the complex nuclease design process [16]. A major revolution in genome engineering came with discovering CRISPR/Cas systems and their direct application as gene-editing platforms in mammalian cells [17].
Gene therapies based on CRISPR/Cas9 have already reached the clinical trial stage for many monogenic diseases, including sickle cell disease, b-thalassemia, and Leber congenital amaurosis [18][19][20]. Several of these therapies are currently in advanced preclinical testing stages, including the ones for Duchenne muscular dystrophy, hemoglobinopathies, and hereditary tyrosinemia type 1 [21]. Numerous gene therapies have also been tested to treat neurodegenerative diseases, including Alzheimer’s, metachromatic leukodystrophy, and spinal muscular atrophy [22][23][24][25]. The unique pathophysiology involving genetic, epigenetic, and idiopathic causes for each condition must be carefully evaluated to determine whether gene therapies are appropriate and which are the best strategies to implement them [26].
Before their widespread application in humans, several challenges and limitations must be overcome to ensure future therapies’ safety. Further research is required to address off-target modifications and rapid degradation and to develop solutions for addressing adverse reactions such as DNA damage [27] and immune responses [28]. The development of proper delivery vehicles could be a way to address some of the current challenges associated with CRISPR gene-editing applications [29]. Delivery vehicles based on nanostructured materials (both organic and inorganic, as addressed later) have emerged as powerful agents to internalize cells effectively and thus increase the efficiency of gene-editing technologies [30].

3. Potential of Genetic Therapies as Treatment Alternatives for Parkinson’s Disease

Gene editing offers unprecedented potential to understand the molecular basis of PD, identify new treatment targets, and ultimately develop new gene therapies. Correcting dysfunctions in the biological pathways associated with PD can be accomplished by selectively editing or up- and down-regulating gene expression in key genes known to become altered in PD, including GDNF, PINK1, PRKN, or AADC [6]. Even if idiopathic PD has a complex multigenic basis and could not be treated by correcting variants in a single gene, gene editing could still represent a promising strategy to restore the activity of the key biological pathways that can become disrupted and cause PD symptoms.
To date, gene-editing approaches for PD have been classified into four types according to the chosen therapeutic target [31]. An initial strategy aims to improve dopamine bioavailability in the brain. The second strategy focuses on neuronal regeneration by targeting neurotrophic factors. A third approach focuses on neuromodulation modifying genes in the subthalamic nucleus (STN). Finally, the fourth strategy is based on reducing α-syn production, thus ameliorating altered mitochondrial pathways [32][33][34]. All these approaches aim to modify the metabolic pathways involved in PD and neuron survival, mainly the aforementioned autophagic, mitochondrial, and lysosomal pathways (Figure 1). 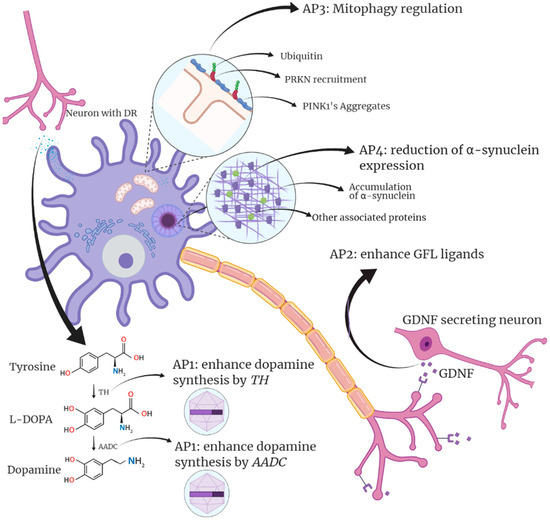 Figure 1. Summary of Parkinson’s gene therapy strategies and targets. The first approach (AP1) focuses on stimulating dopamine synthesis by targeting AADC and TH in dopaminergic neurons of the Substantia nigra. The second approach (AP2) focuses on GLF ligands. A third approach (AP3) focuses on the stimulation of mitophagy. Finally, the fourth approach (AP4) aims to reduce the presence of α-synuclein that ultimately generates Lewy bodies. Designed with biorender.com.
The two pathways that have received the most attention in gene-editing studies related to PD are the dopamine pathway and neurotrophic factors. Manipulating neurotrophic factors can stop not only symptoms but also promote neuron survival. Alternatively, strategies involving the dopaminergic pathway mainly involve non-pulsatile stimulation of dopamine production that can drastically improve currently used treatments.