Glutathione (GSH) is the main non-enzymatic antioxidant playing an important role in detoxification and signal transduction by modulation of protein thiols redox status and direct scavenging of radicals. The latter function is not only performed against reactive oxygen species (ROS) but GSH also has a fundamental role in buffering nitric oxide (NO), a physiologically-produced molecule having multifaceted functions. The efficient rate of GSH synthesis and high levels of GSH-dependent enzymes are characteristic features of healthy skeletal muscle where, besides the canonical functions, it is also involved in muscle contraction regulation.

γ-l-glutamyl-l-cysteinyl-glycine (glutathione, GSH) is the most versatile non-enzymatic antioxidant involved in cell signaling, detoxification and oxy-radical scavenging activity. Its structure, cellular concentration and the systems deputed to its synthesis, degradation and regeneration concur to these different functions. For instance: (i) GSH synthesis is a two-step process mediated by cytosolic enzymes (a faster process with respect to a gene-mediated one); (ii) the peculiar iso-peptide bond of the glutamate makes GSH a protease-resistant peptide; (iii) the NADPH-reductase systems guarantee the maintaining of a high ratio between reduced (GSH) and oxidized (GSSG, GSSR) forms under physiological conditions. Alteration of such ratio during oxidative burst can modulate redox signaling pathways related to various cellular processes including proliferation, growth and apoptosis [1].
Two ATP-dependent cytosolic enzymes are responsible for the de novo synthesis of GSH: glutamate-cysteine ligase (GCL) also named γ-glutamylcysteine synthase (GCS) and glutathione synthase (GS). The first is the rate-limiting enzyme formed by a modulatory or light subunit (GCLM) and a catalytic or heavy subunit (GCLC). Using ATP hydrolysis, GCLC is able to shape an iso-peptide bond between the γ-carboxyl of glutamate and the amino group of cysteine. GS catalyzes the addition of glycine to γ-glutamylcysteine created by GCLC to form GSH [1]. GCLC is transcriptionally regulated by Nuclear factor (erythroid-derived 2)-like 2 (NFE2L2), a transcription factor that regulates a wide array of antioxidant responsive element-driven genes in various cell types [2]. GSH degradation occurs in the extracellular space by the enzyme γ-glutamyl-transpeptidase (γ-GT), which cleaves GSH into cysteinyl-glycine (Cys-Gly) and glutamate. Thus, systemic GSH homeostasis relies on its intracellular synthesis, export and degradation outside the cell in a cycle with a half-life of 2–3 h [3]. Intracellularly, GSH is present in a dynamic equilibrium with its oxidized forms, mainly GSSG, which is the product of a disulfide bridge between two molecules of GSH directly produced upon oxidative burst or by the activity of the antioxidant enzyme glutathione peroxidase (GPx). Subsequently, GSSG is converter to GSH through the glutathione reductase (GR). GSSR represents a less concentrated form deriving from mixed disulfide formation with protein thiols (protein S-glutathionylation); however, this oxidized form is pivotal in redox signaling pathways representing a reversible post-translational modification of proteins [4]. The value of GSH/GSSG ratio is universally accepted as an index of cell redox status because of the scavenging effect of GSH against several reactive oxygen species (e.g., hydroxyl radical: OH, superoxide anion: O2−, hydrogen peroxide: H2O2, lipid peroxyl radical: HOO), either directly or through the activity of antioxidant enzymes, mainly the glutathione peroxidases. GSH homeostasis is fundamental for cell metabolism and function as stated by the association of altered GSH levels with numerous conditions and pathologies such as aging, neurodegeneration, cancer, inflammation and muscle degeneration (Figure 1) [5][6][7][8].

Figure 1. Cellular GSH homeostasis. For details see the text.
GSH plays an important role also in the field of nitric oxide (NO) physiology and pathology [9][10][11]. NO is a gaseous free radical synthesized by NO synthases (NOSs) starting from L-arginine, NADPH and oxygen. NO is a highly reactive molecule that despite being potentially toxic is implicated in a wide range of physiological processes, such as neurotransmission, vascular tone regulation, musculature contraction/relaxation and platelet aggregation [12][13][14]. Furthermore, it is an integral part of the inflammatory response to pathogens and cancer cells [15][16]. This versatility of NO mainly derives from its complex chemistry. Depending on its distribution and reactants, NO can exist in different redox forms with distinct and highly reactive properties, such as nitroxyl (HNO), oxides (NO2, N2O4 and N2O3), peroxynitrite (ONOO·−) and S-nitrosothiols (RSNO) [17].
GSH and NO can easily interact at different levels; a number of still debated mechanisms commit NO to react with GSH with the formation of S-nitrosoglutathione (GSNO), which is considered an endogenous NO reserve that contributes to the intracellular regulation of nitrosative stress [18]. In fact, we and other researchers demonstrated that neuronal NOS (nNOS) overexpression or treatments with NO donors result in intracellular GSH increase, a process fundamental to counteract neuronal death [11][19][20]. Thiol of “reactive cysteine” on proteins (P-SH) is another important target of reactive oxygen/nitrogen species (ROS/RNS) signaling pathway because it can be oxidized at a different extent up to the sulfonic form (P-SO3H), an irreversible oxidation product. On the contrary, the sulfenic form (P-SOH) represents the most frequent and reversible modification under physiological ROS/RNS flux. It can react with NO to produce the S-nitrosylation derivative (P-SNO), which seems to be implicated in the majority of long-range NO-cellular redox processes. The P-SNO can be reconverted to P-SH by thiol-dependent systems, among which GSH plays a prominent role through the translocation reaction of NO that generates GSNO [18][21] (Figure 2). Based on this evidence, it is conceivable to link the majority of NO effects on the availability and redox status of GSH.

Figure 2. The crosstalk between GSH and NO. For details see the text.

2. Oxidative/Nitrosative-Mediated Signaling and Stress as the Conditions Where NO Mainly Intersects GSH

Oxidative/nitrosative stress is properly “an imbalance between oxidants and antioxidants in favor of the oxidant species, potentially leading to damage” [22][23]. ROS are by-products of the sequential one-electron reduction of molecular oxygen, which includes radical and non-radical species. RNS are a group of reactive compounds that include NO, which is physiologically produced by NOSs, a NADPH-dependent family of enzymes present in most cells and tissues [24]. To date, three main isoenzymes belonging to this family have been cloned and purified: nNOS, endothelial NOS (eNOS) and inducible NOS (iNOS) [25]. The first two are constitutively expressed and calcium (Ca2+)-dependent enzymes. nNOS is mainly expressed in cells of neuronal origin where NO functions as a neuromodulator and neurotransmitter in the central and peripheral nervous system. Notably, the nNOS isoform is also present at the skeletal and cardiac muscle level, namely the nNOSμ [26][27]. It is characterized by a 34-amino acid insert that arises from the alternative splicing of nNOS pre-mRNA between exons 16 and 17. The catalytic activity is similar to that of nNOS and its expression coincides with the formation of differentiated myotube in cultured cells. eNOS is localized in the endothelium, in cardiomyocytes and adipocytes. It principally participates in the regulation of blood pressure and vascular tone. Instead, iNOS is a Ca2+-independent and cytokine-inducible enzyme, expressed in macrophages during inflammation and tissue injury [28]. In recent years, the importance of the fourth isoform of NOS has also emerged: the mitochondrial NOS (mtNOS) [29]. It is localized in mitochondria of several tissues, including skeletal muscle, where it regulates O2 consumption [30].
NO is a hydrophobic gas molecule with a high diffusion coefficient but a short lifetime mainly due to its rapid reaction with oxygen and multiple cellular components. Therefore, as in the case of ROS, low and regulated production of NO is associated with paracrine signaling processes whereas its overproduction can cause damage to biological macromolecules and determine many pathological states [18][31][32]. In this regard, the product of NO reaction with O2− leads to the formation of ONOO·−, which is a strong oxidant that reacts with lipids, DNA, and proteins via direct oxidative reactions or via indirect, radical-mediated mechanisms [33]. 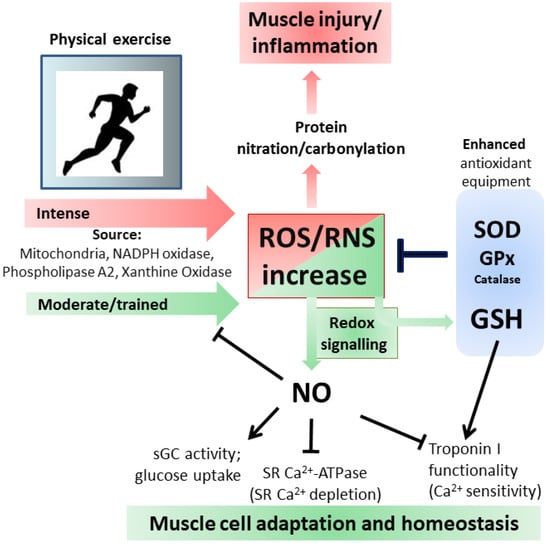 Figure 3. Oxidative and Nitrosative stress/signaling during intense and moderate physical exercise. For details see the text.
Considering the importance of GSH and NO in the control of muscle responsiveness, nutritional approaches aimed at increasing their concentrations have been tested to preserve muscle homeostasis. For instance, long-term supplementation with a cystine-based antioxidant compound is able to delay age-associated muscle loss [71]. Direct supplementation of GSH precursors, including N-acetylcysteine, L-alanine and L-glutamine, was also shown to promote muscle performance and recovery during exercise [72][73][74]. Nevertheless, the intake of antioxidants such as Vitamin C and E impedes a number of physiological responses activated during muscle training with no effect on GSH production [75][76]. This suggests that the promotion of GSH metabolism rather than blunting ROS production alone is the way for assuring adaptations to exercise [77]. On the other side, nutritional supplementation of the NO precursors L-Arginine and L-Citrulline has been clearly shown to ameliorate muscle homeostasis in terms of improved protein synthesis rates, myotube diameter and muscle antioxidant capacity [78][79]. These phenotypical advantages were also ascribed to the induction of iNOS expression and appreciable in wasting conditions obtained by deprivation of growth factors and/or nutrients.