Cancer is a deadly disease that has become a burden to everyone. There were 9.8 million cancer deaths reported in 2018. Colorectal cancer (CRC) is the third most common type of cancer globally, with 1.80 million cases, and it ranks second with the highest mortality in the world, i.e., 862,000 deaths.

Cancer is a deadly disease that has become a burden to everyone. There were 9.8 million cancer deaths reported in 2018. Colorectal cancer (CRC) is the third most common type of cancer globally, with 1.80 million cases, and it ranks second with the highest mortality in the world, i.e., 862,000 deaths [1]. The increase in CRC in developing countries is possibly due to an increase in the aging population, modern living habits, dietary habits, and an increase in risk factors for CRC, which include genetic diseases, smoking, alcohol, and lack of exercise. The percentage of CRC deaths in Indonesia in 2014 was 10% of the 103,000 CRC mortality rates in men and 8.5% of the 92,000 in women [2][3]. In Indonesia, CRC is an interesting case. For instance, the median age of colorectal cancer patients is younger than the western population. This means that productive young people are affected more, thus posing a heavy economic burden on their families [4][5][6].

Cancer treatment with chemotherapy agents is still an option, but the multi-drug resistance (MDR) mechanism has resulted in reduced efficacy of chemotherapy drugs [7]. The chemoprevention agents referred to here generally have the role of inhibiting tumor growth through cell cycle arrest mechanisms [8], stimulating apoptosis, or inhibiting the expression of proteins that play a role in MDR [9]. Various efforts are needed to develop new treatment methods for more effective therapy and prevention of degenerative diseases [10]. Alternative options such as the use of medicinal plants in the treatment of degenerative diseases can decrease any side effects [11]. Usually, lower effects may affect low efficacy, so there may be a trade-off. Therefore, there is a need to develop targeted therapy that uses super toxic plant-derived toxins as warheads that are to be conjugated to monoclonal antibodies targeting the CRC-specific antigens [12].

One of the strategies in the discovery and development of drugs for the prevention of degenerative diseases is by exploring natural products, especially plants, that have the potential to be sources of antioxidants. Plants are known to have an important role in drug discovery [13]. Natural products are secondary metabolites produced by plants, animals, and microorganisms in response to external stimulation such as changes in nutrition, infection, and competition [14].

The PRISMA flow diagram of the publication screening is presented in Figure 1. Initially, 465 publications were identified through the systematic literature search string described in Table 1. Following the relevance of the initial papers to the defined research questions for this study, the literature screening, which consisted of title, abstract, and full-text screenings, resulted in 38 final papers for further data extraction. Overall, the screening processes only included 10% of the initially identified papers in Scopus, PubMed, and Google Scholar publication databases. The literature search results from major scholar databases such as Scopus as well as Google Scholar suggested the approximate publications that were recorded out of publications with duplicates (Figure 1). The cut-off date of the literature search was 13 February 2021.

Figure 1. The PRISMA flow diagram showing the selection of eligible studies.
Table 1. Search string composition adopted from defined PICO with desired focus on studies from Indonesia in both English and Bahasa Indonesia.
As presented in Table 2, the research publication on colorectal cancer based on natural products derived from Indonesian plants has increased since 2008. The trend of publications seems to have increased significantly, starting in 2016, and it was the highest in 2018. Afterward, the positive trend continued until 2020, with the most publications in the form of journal articles.
Table 2. The trend of publication on natural products in colorectal cancer in Indonesia: (a) year vs the number of publications; (b) types of publications reported.
Table 3 exhibits that the distribution of natural products having the potential activity against colorectal cancer cells in Indonesia is dominated by terpenoids, followed by phytosterols, phenolics, alkaloids, and polyisoprenoids. The type of cell line that is most often utilized in the cytotoxic activity analysis of natural products against colorectal cancer cells is the WiDr cell line (followed by HT-29 cells and HCT-116 cells). WiDr cells are human colorectal cancer cells isolated from the colon of a 78-year-old woman, a derivative of other colorectal cancer cells, namely HT-29 cells [15]. This data led to the MTT in vitro assay as a general method that was used to analyze the cytotoxic activity of a natural product against colorectal cancer cells, followed by other in vitro and in vivo methods. Commonly known anticancer methods include the MTT assay method, apoptosis, enzymatic inhibition by the in vitro method, and the use of mice and rats in the in vivo method. Azoxymethane, a metabolite of dimethyhydrazine (DMH), has been used extensively by many investigators to induce colon tumors and to study the effects of nutritional factors and chemopreventive agents in colon carcinogenesis. Azoxymethane (AOM) induces colon cancer in experimental animals; in a mechanism that is mediated by glutathione (GSH) depletion and impairing the total antioxidant capacity in colonic cells of rats [16][17]. In anticancer studies, researchers prefer the in vitro method, as can be seen from the larger research ratio than the in vivo method from results screened in the Scopus, Pubmed, and Google Scholar databases. A more complete explanation of the distribution of the types of methods, objects used, and natural products analyzed from 38 articles is summarized in Table 4.
Table 3. Systematic review results summarized from 38 publications: (a) types of natural product; (b) the number of used cell lines; (c) colorectal cancer cytotoxicity analysis method.
Table 4. Systematic review results summarized from 38 publications.

Cancer is the second leading cause of death in the world after cardiovascular disease. Meanwhile, colorectal cancer ranks in the top three in the number of causes of death and is ranked as the second most common cancer type in men and third in women [54][55]. A comprehensive therapy development to treat colorectal cancer is needed to reduce patient mortality. This therapy development is expected to be capable of overcoming the resistance of conventional chemotherapy agents that already exist today. Resistance of WiDr cells to 5-fluorouracil (5-FU)—an antimetabolite chemotherapeutic agent—is mediated by an increased expression of thymidylate synthetase enzyme which is the main inhibitory target of 5-FU [56][57]. WiDr is also one of the cells that have low sensitivity to treatment with 5-FU. WiDr cells are widely applicable in Indonesia due to proper carcinogenesis and tumorigenicity studies and anti-tumor testing on potency disclosure of bioactive compounds from natural products for further development. Besides, WiDr cells are identical toHCT-15 and HT-29 cell lines because they are derived from the same patient and most likely from the same tumor [57]. Overall, WiDr cells are suitable to be used as models in screening the novel compound as a co-chemotherapeutic agent with 5-FU. Combination therapy (co-chemotherapy) of 5-FU with a chemo-preventive agent is an alternative to overcome resistance, increase efficacy, and reduce adverse effects. These facts that lead the research and development of natural products become important for the future directions of medicinal plants in colorectal cancer therapy.

Plants are one of the largest sources of natural products that are used to discover and develop novel chemotherapeutic agents. In particular, several discovered novel compounds from plants have unique mechanisms of action, greater efficacy, or lower adverse effects compared to the conventional chemotherapy drugs currently in use. Bioactive compounds from medicinal plants in Indonesia have also been studied to exhibit anticancer activities in the colorectal, namely terpenoids, phytosterols, alkaloids, phenolics, flavonoids, and polyisoprenoids ( the basic structure for one of several derivatives from those bioactive compounds is presented in Figure 2 ). 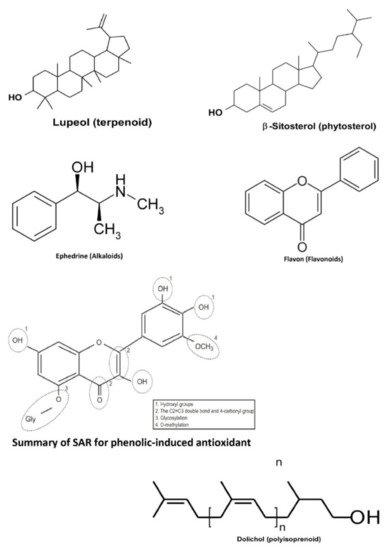 Figure 2. The basic structure for one of the various derivatives from bioactive compounds of terpenoids, phytosterols, alkaloids, phenolics, flavonoids, and polyisoprenoids.

In the current paper, we conducted a systematic review that provided predictions for several secondary metabolites sourced from natural products to be utilized as an alternative treatment against colorectal cancer in Indonesia. They are also prospective candidates for future co-chemotherapy agents in safety, quality, standardization, and efficaciousness. This finding emphasized the potential of several natural products as anticancer agents against colorectal cancer cells.

Leading the discovery is the main component of today’s early pharmaceutical research. The exploration of novel drugs for colorectal cancer therapy that has a fast progression can be a drug repurposing strategy to bypass preclinical steps that usually require laborious and resource-intensive work. In addition, it is also considered that the development of existing agents in the future can be more easily utilized by the community. For those purposes, the exploration of Indonesia’s frequently used natural resources biodiversity is the best choice. In the past, drug development is based on trial and error, so it was costly and time-consuming. Today, molecular modeling, with the aid of computer hardware and software (computational method), has reduced the risk and the process of discovery is more effective in cost and time [58].

In summary, this entry revealed bioactive compounds from natural products of Indonesian plants that have been researched and have potential as anticancer agents that are most commonly experienced in men and women including colorectal cancer. The general method used for the analysis of the cytotoxic activity of colorectal cancer cells is the in vitro method using the MTT assay, the most widely used cell line is WiDr. The most studied bioactive compounds that have any activity against colorectal cancer are terpenoids, phytosterols, phenolics, alkaloids, and polyisoprenoids, but other natural products may have the potential to be developed from this study.