Neuroinflammation is a common feature in Alzheimer’s (AD) and Parkinson’s (PD) disease. In the last few decades, a testable hypothesis was proposed that protein-unfolding events might occur due to neuroinflammatory cascades involving alterations in the crosstalk between glial cells and neurons. Here, we tried to clarify the pattern of two of the most promising biomarkers of neuroinflammation in cerebrospinal fluid (CSF) in AD and PD. This study included cognitively unimpaired elderly patients, patients with mild cognitive impairment, patients with AD dementia, and patients with PD. CSF samples were analyzed for YKL-40 and C-reactive protein (CRP). We found that CSF YKL-40 levels were significantly increased only in dementia stages of AD. Additionally, increased YKL-40 levels were found in the cerebral orbitofrontal cortex from AD patients in agreement with augmented astrogliosis. Our study confirms that these biomarkers of neuroinflammation are differently detected in CSF from AD and PD patients.

Growing evidence indicates that blood-borne CRP can cross the blood-brain and blood–spinal cord barriers; thus, CRP can be found in the CSF and deposited in the diseased central nervous system (CNS). The source of CRP might also be local. However, CRP production may occur in multiple CNS-resident cells including neurons, microglia, and astrocytes [1][2][3]. Regardless of its origin (hepatic versus local), the presence of CRP in the CNS is associated with numerous diseases including AD [4]. CRP levels were also found to increase in brain parenchyma tissue after intracerebral hemorrhage [5]. Additionally, large amounts of the protein were present in perihematomal regions and within neurons and glia of patients who died within 12 h of spontaneous intracerebral hemorrhage [5][6].
Despite these accumulative data supporting a role of neuroinflammation, particularly YKL-40 and CRP in AD and PD, there is no definitive evidence reflecting the peripheral (blood) and central (CSF) concentration changes of YKL-40 and CRP in AD and/or PD patients. We think that further research is needed to elucidate the variable pattern of these inflammatory biomarkers in the CSF and blood from AD and PD patients. In this work, we aimed at clarifying YKL-40 and CRP concentrations measured in CSF and plasma and to determine their specificity in AD and PD. To address this issue, we analyzed YKL-40 and CRP levels in CSF and plasma from a well-characterized cohort of patients with MCI, AD, and PD, using sensitive enzyme-linked immunosorbent assays (ELISAs).

Demographic and clinical data are shown in Table 1 for further characterization of the study cohort. A total of 34 subjects were clinically diagnosed with AD, 22 subjects were grouped as MCI, and 30 subjects were diagnosed with PD. Individuals diagnosed with AD were slightly older than the rest of the cohort, including PD, MCI, and healthy subjects. Female sex was overrepresented in the AD and MCI groups, while males represented around 60% of controls and PD subjects. APOE ε4 carriers were more prevalent in the MCI/AD group than in controls, according to previous publications [7]. Most AD patients had clinically mild dementia (74% scored 1 on the CDR scale), and none of the PD patients reached the dementia stage. Furthermore, the majority of individuals diagnosed with PD exhibited mild motor impairment (73% of them were in Hoehn & Yahr stage 1 or 2).
Table 1. Demographic and clinical data of participants.
AD: Alzheimer’s disease; MCI: mild cognitive impairment. PD: Parkinson’s disease; n: number; F: female; ns: non-significant; y: year; M: male; SD: standard deviation; NA, not applicable; CDR: Clinical Dementia Rating. p value indicates statistical difference within the cohort1; -: not obtained data; a p < 0.05 vs PD; b p < 0.01 vs. PD; c p < 0.0001 vs. AD; d p < 0.0001 vs. PD. 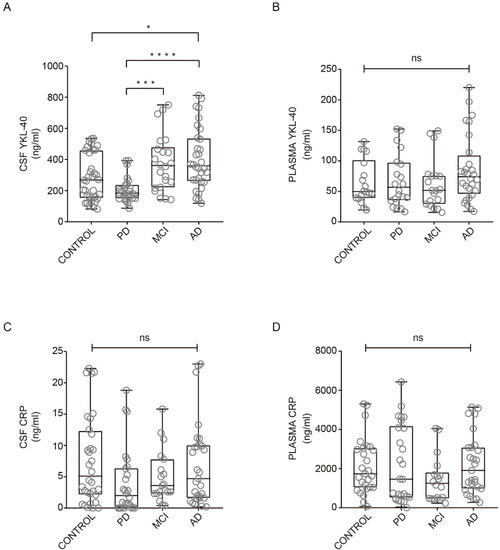 Figure 1. YKL-40 and CRP levels in CSF and plasma in different diagnostic groups. Box-and-whisker plots showing (A, B) YKL-40 and CRP levels (C, D) in CSF and plasma, respectively, across the diagnostic groups. Differences between groups were assessed using Kruskal–Wallis test followed by Bonferroni correction. * p < 0.05; *** p < 0.001; **** p < 0.0001. MCI, mild cognitive impairment; AD, Alzheimer’s disease dementia; PD, Parkinson’s disease. ns: non-significant.
A nonparametric trend test did not show any statistically significant rising tendency of CSF (p = 0.48) or plasma (p = 0.053) YKL-40 levels along with MCI or mild and moderate AD. When adjusting for age, sex, and APOE ε4 status, levels of CSF YKL-40 remained high in AD dementia patients when compared with controls (b = 125.5 ng/mL, 95% CI = 19.1 to 232.0 ng/mL, p < 0.05).
Regarding CRP levels in CSF and plasma, we did not find significant differences between healthy subjects and AD, MCI, and PD patients (Figure 1C, D). Our results are consistent with previous studies indicating no differences in CRP levels from CSF comparing healthy subjects and PD patients [8] or in serum CRP levels between patients with AD and healthy subjects [9].
In order to analyze the discriminative ability of both biomarkers for the diagnosis of PD and AD, we performed a logistic regression analysis and calculated the corresponding ROC curve for each CSF biomarker and diagnosis. CSF YKL-40 differentiated AD patients from the rest of the cohort, including PD, MCI, and healthy subjects, with 65.6% sensitivity and 66.3% specificity (AUC = 0.69, 95%CI = 0.58 to 0.80, cutoff point = 316.5 ng/mL) (Figure 2A). The combination with CSF CRP did not improve the performance. Nevertheless, for the diagnosis of PD, the combination of CSF YKL-40 and CRP yielded the best results, showing a moderate discriminative ability (AUC = 0.82, 95% CI =0.73 to 0.89, cutoff point of the model = 0.300), with 79.2% sensitivity and 82.1% specificity (Figure 2B).

Figure 2. Receiver operating characteristic (ROC) analysis of YKL-40 and CRP levels in CSF. (A) ROC curve and its corresponding area under the curve (AUC) differentiating YKL-40 levels in CSF from AD patients and non-AD subjects including control subjects. (B) AUC differentiating the combination of YKL-40 and CRP levels in CSF from PD and non-PD patients. AUC, area under the curve; AD, Alzheimer’s disease dementia; PD, Parkinson’s disease.

2.3. Correlations between YKL-40 and CRP Levels in Plasma and CSF

Upon inflammation, YKL-40 is produced and secreted by many cells including vascular smooth muscle cells and macrophages [10]. In the brain, YKL-40 is mainly expressed in reactive astrocytes [11][12]. Thus, we investigated if the observed increase in YKL-40 levels in CSF from AD patients could be associated with higher YKL-40 levels in cerebral parenchyma. To explore this hypothesis, we examined the YKL-40 cellular levels in human brain tissue from AD patients and healthy subjects. Immunoblotting showed that YKL-40 levels in cerebral orbitofrontal cortex samples were significantly increased in AD patients compared with healthy subjects (Figure 4A). To determine if increased levels of YKL-40 in the cerebral orbitofrontal cortex were associated with astrocyte reactivity, the levels of GFAP were also analyzed. Western blotting showed that GFAP levels were also higher in AD samples compared to those observed in control subjects (Figure 4B) in parallel with the observed rise in YKL-40 levels, proving that AD astrogliosis increases YKL-40 levels. 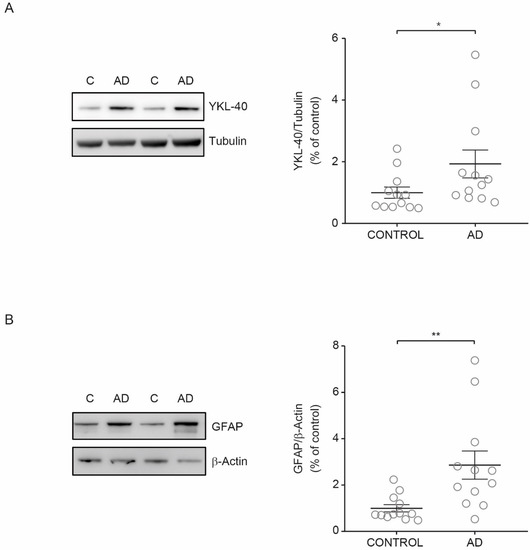 Figure 4. YKL-40 and GFAP levels in the cerebral orbitofrontal cortex of AD patients and control group. Western blot analysis showing (A) YKL-40 and (B) GFAP in the cerebral orbitofrontal cortex of AD and control samples. Representative Western blots (left panels) and histograms with their densitometric analysis (right panels) are shown. Data are represented as the mean ± SEM. Differences between groups were assessed using Mann–Whitney test; * p < 0.05, ** p < 0.01.

In this cross-sectional study, we showed a variable pattern of the inflammatory biomarkers YKL-40 and CRP in AD and PD patients. We confirmed that YKL-40 levels are significantly increased in CSF from AD patients compared to healthy controls, indicating an inflammatory response at the dementia stage. Such an increase was not seen in MCI or PD patients, where CSF YKL-40 levels remained unchanged. These results were also extended to the cerebral orbitofrontal cortex where we found that YKL-40 expression was augmented in AD patients, suggesting glial activation, thus corroborating our hypothesis. Another finding in this study was related to CRP levels in CSF and plasma. We found lower CRP levels in CSF from PD patients compared with other groups (AD, MCI, and healthy subjects), but this change did not reach statistical significance. Furthermore, we did not find evidence of significant alterations in plasma for YKL-40 or CRP.
Inflammation is increasingly recognized as part of the pathology of neurodegenerative conditions, including AD and PD. Evidence proposes that neurodegeneration occurs in part because the CNS environment is affected by a cascade of events collectively named neuroinflammation [13]. Despite biomarkers of neuroinflammation being useful for monitoring disease diagnosis, progression, and response to therapy, accurate and reliable biomarkers for many neurological diseases are scarce. In recent years, the interest in new neuroinflammatory biomarkers has grown at the early and symptomatic stages of these diseases. Blood and CSF are commonly used to monitor biomarkers of neuroinflammation, with many of them being the consequence of CNS pathology. Some examples are the levels of cytokines and chemokines, the loss of blood-brain barrier integrity, and neuronal damage indicators [14].
Only a few studies have shown the possibility of analyzing YKL-40 levels in CSF and blood from patients with AD and predementia stages. One of these studies found that YKL-40 concentration in CSF from AD patients was significantly elevated compared to cognitively normal subjects, with an AUC = 0.88 pointing to the potential value of YKL-40 levels in CSF for AD diagnosis [15]. Increased YKL-40 levels were observed not only in AD dementia but also in the prodromal phase of AD when compared to cognitively normal controls [16]. Similar observations were found in patients with AD, where YKL-40 concentration in CSF was increased in very mild and mild dementia subjects in comparison with cognitively normal individuals [17]. In our study, we found a trend of increased YKL-40 levels in CSF from MCI subjects compared with healthy controls, and this increase was evident in AD patients. However, the resulting AUC in our study was lower; thus, we propose that YKL-40 might only be a modest AD biomarker candidate.
Significantly increased chitinase-3 like 3 (CHI3L3) mRNA expression, a mouse homolog of YKL-40, was found in brains of AD mice models when compared to age-matched controls [18]. Similarly, in autopsied human brain samples from pathologically confirmed AD subjects, YKL-40 mRNA levels were significantly increased in comparison with nondemented controls [18]. Although there is no clear explanation regarding which factors modulate YKL-40 levels in AD, it has been suggested that elevated YKL-40 expression and protein levels might result from increased astrocytic reactivity and release in the brain [19]. It was shown that astrocytes in the close vicinity of amyloid plaques were immunoreactive for YKL-40, which confirms the involvement of this protein in the neuroinflammatory response to Aβ deposition [17]. It is known that insoluble Aβ aggregates may induce inflammatory reactions and activation of microglia, resulting in increased proinflammatory mediator production. The relationship between YKL-40 and amyloid-related pathways in AD development was further discussed [20][12]. It seems that the YKL-40 concentration in CSF may be linked to AD pathology, particularly astrogliosis. Indeed, it has been shown that YKL-40 is expressed by reactive astrocytes GFAP+ in AD [12]. Thus, increased expression of YKL-40 and protein levels in reactive astrocytes may be reflected in the CSF, indicating that astrocyte-associated metabolites may be utilized as potential biomarkers. Although data regarding elevated YKL-40 levels in CSF from early stages of AD are contradictory [17][20][21][22][23][16], our results support the increase in YKL-40 levels in CSF from AD subjects, as well as the increased astrocytic YKL-40 levels associated with astrocytosis.