During the last two decades the large development of analytical instrumentation, mainly the introduction of mass spectrometry (MS) and tandem mass spectrometry (MS/MS), has facilitated the determination of analytes in biological, food, and environmental samples at trace concentrations. However, although the high sensitivity provided by the instrumentation and the direct injection/analysis of crude samples/extracts are not always possible, new sample preparation strategies are needed for potential interferences removal and analyte pre-concentration, for increasing the robustness and repeatability of measurements, for converting the analyte to a more suitable form for separation/detection, and also for avoiding conventional multiple-step pre-treatment methods [1]. Several extraction/pre-concentration techniques have been therefore developed and among those techniques, solid phase extraction (SPE) and solid phase microextraction (SPME) are nowadays well established and commercially available methodologies. However, the main drawback associated with them is the moderate selectivity of sorbents, which can require further extract clean-up stages [2].

As shown in Figure 1, dSPE and D-µ-SPE [3][4][5][6] procedures consist of dispersing the adsorbent (a few milligrams or a very few milligrams) into the sample/extract by shaking (oscillators and vortex) and by applying ultrasounds, and, for magnetic adsorbents, by magnetic stirring [7]. Dispersion enhances target adsorption on the adsorbent (nano)microparticles, and the use of ultrasound and mechanical shaking (mainly vortex) favors adsorbent dis-aggregation and maximizes the surface area of the adsorbent particles. Vortex stirring is a soft and low-cost shaking technique and dispersion assistance is more repeatable when compared with ultrasounds because of the ultrasound fluency dependence on the position inside the water-bath tank [5]. Vortex assistance also prevents analyte degradation and adsorbent aggregation, although the technique offers lower extraction kinetics when compared to ultrasounds dispersion [8][9][10] (in fact, some reports have stated that ultrasounds change the absorption kinetics [11][12][13]). 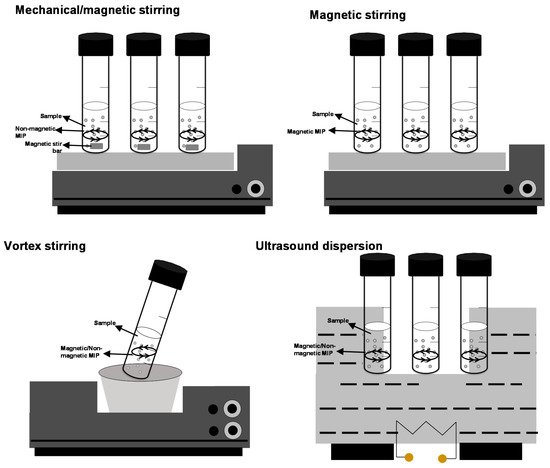 MMIP beads were first introduced by Ansell and Mosbach in 1998 as a core–shell structure (magnetic iron oxide, magnetite, Fe3O4) for performing drug radioligand binding assays [14]. Then, MMIPs (magnetic nickel hexacyanoferrate, NiHCF, nanoparticles coated with a molecularly imprinted polymer for the herbicide chlorotoluron) were proposed for preparing selective modified electrodes [15]. MMIPs as selective adsorbents for SPE procedures offer advantages such as avoidance of drawbacks associated with conventional batch SPE/µ-SPE procedures, which need filtration/centrifugation steps for separating the adsorbent from the bulk sample after the loading stage and from the extract after analyte elution. In addition, losses of adsorbent particles are minimized since adsorbent separation is easily and quickly achieved by applying a magnet [16]. As previously mentioned, MMIP nanoparticles can be stirred (dispersed) in the sample/extract (loading step) and in the eluting solution (elution step), taking advantage of their magnetic properties, but stirring can be also performed by vortexing and by ultrasound dispersion.
There are several strategies for preparing MMIPs, which lead to a great varietyof magnetic adsorbents. Moreover, despite free radical polymerization mechanism(s), which are mainly used to prepare MMIPs (and also MIPs), the heterogeneity caused by the fast chain propagation and irreversible termination reactions has led to the use of controlled radical polymerization strategies such as reversible addition fragmentation chain-transfer (RAFT) polymerization for preparing MIPs [17] and also MIP coatings over magnetic and non-magnetic supports [18][19][20][21]. RAFT polymerization provides more accessible sites for target adsorption and faster mass transfer because of the more homogenous polymeric network [22].

Diol-based reagents such as polyethylene glycol (PEG) [24][25][26][27][28] interact with the nanoparticle surface through one of the hydroxyl groups, allowing the remaining hydroxyl groups to be available to react with the components of the pre-polymerization mixture (Figure 2). 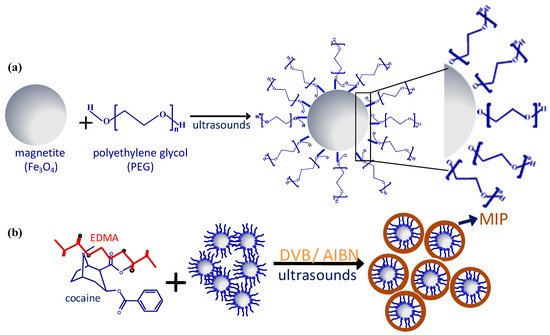 Figure 2. Schematic representation of binding mechanism between magnetite nanoparticles and polyethylene glycol (PEG) (a) and MMIP preparation (b), Adapted with permission from Ref. [26]. Copyright 2016 Elsevier.

Silica-based reagents (Table 1) are an alternative to vinyled and diol-based compounds in magnetite surface functionalization procedures for overcoming problems derived from core–shell breakdown as consequence of extreme pH and temperature operating conditions, since the resulting composites exhibit great stability [29]. TEOS is a typical silica-based compound used for Fe3O4 modification at moderate operating conditions, resulting in Fe3O4@SiO2 composites. The TEOS layer over the magnetite nanoparticles is a source of hydroxyl groups for further interactions with the pre-polymerization reagents [30][31][32][33][34][35][36][37][38][39][40][41][42][43][44][45][46][47][48][49][50][51]. A typical diagram of a magnetic silica-based composite is illustrated in Figure 3. 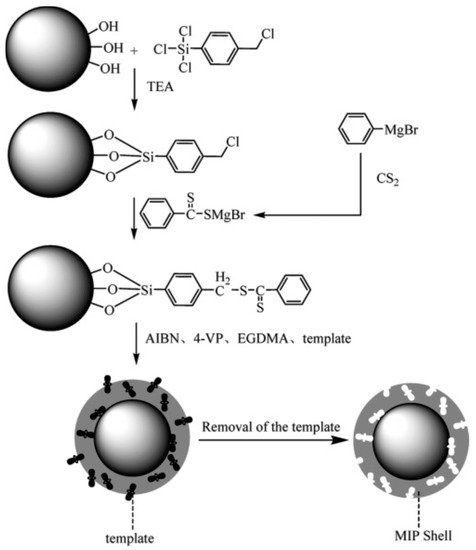 Surface functionalization of mixed magnetic composites involving the presence of CNTs [105] and MWCNTs [106][107][108] has been efficiently achieved by using diol-based reagents such as EG and PEG [105][106][109][110], although some authors have described the convenience of a previous MWCNT@Fe3O4 composite oxidation [107], reduction [108], or carboxylation [111][112] stage before functionalization/MIP synthesis.

Regarding magnetic nanosheet-supported MIPs, the GO@Fe3O4 surface is usually functionalized by grafting with acrylic acid as shown in Figure 4 [113][114], which ensure the presence of vinyl groups for further polymerization. Acrylic acid was also used for surface modification of chitosan based GO@Fe3O4 composites [115]. 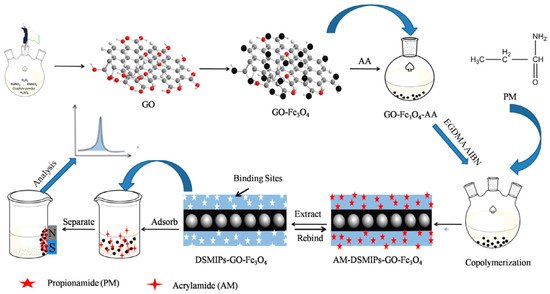 As previously commented, functionalization in HPMIPs based on mesoporous silica (1,2-diol groups over the HPMIPs) can be achieved by treating the composite with diluted perchloric acid (Figure 5) [116]. 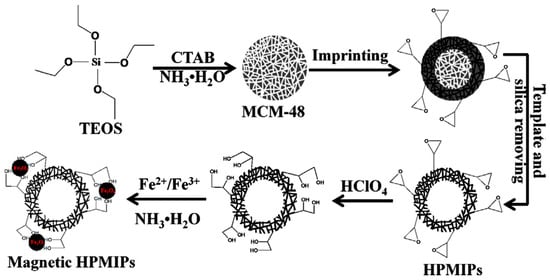 2.1.5. Other Mixed Composites for MMIPs

Various types of magnetic composites (Table 3) have been used as magnetic cores for MMIPs such as metal-organic frameworks (MOFs) and zeolite imidazolate frameworks (ZIFs).

Ionic molecularly imprinted polymers (IIPs) have also been proposed for dSPE [124]. MIP synthesis around non-magnetic nanoparticles, such as silica nanoparticles, has been also performed to obtain stable adsorbents. In addition, the excellent properties of MOFs have led to preparation of MOF-MIP composites based on UiO-66 MOF [129] and HKUST-1 MOF [130] by direct MIP polymerization on the MOF’s surface. Hollow non-magnetic composites based on silica [130] and carbon [131] have been also prepared for dSPE/D-µ-SPE. Other composites such as MWCNT-MIPs have also been demonstrated to be effective adsorbents for dSPE of dioctyl phthalate in beverage samples [132].

MIMSPE procedures have been revealed as excellent approaches for miniaturization of SPE-based techniques in analytical chemistry, offering selective extraction/pre-concentration when analyzing complex samples. Dispersive SPE/µ-SPE procedures based on MIPs (mainly MMIPs) have shown high potential of miniaturization, which implies the use of low amounts of adsorbents as well as low volumes of organic solvents for performing the elution stage.
However, MIPs and MMIPs face a number of challenges during the preparation (synthesis) stage and also during the application. MMIPs are synthesized in nonpolar solvents to avoid the disruption of the hydrogen bonding between monomer and templates. The generated hydrophobic surfaces lead to adsorption of interferences such as proteins. RAFT polymerization is a good alternative to overcome this problem since it allows the preparation of highly hydrophilic MIPs (or MIP external layers over nanoparticles), which can lead to efficient adsorbents for samples of a wide polarity range. Improvements have also been addressed to automate the techniques (similar to on-column/cartridges SPE) since batch MIMSPE procedures require several steps (conditioning, loading, washing, elution) and the procedures are not appealing processes when coping with hundreds of samples. In addition, the coupling (and also automation) of the MIMSPE devices directly with analytical instruments has not been explored yet.
In any case, MIMSPE procedures open a fascinating window to analyzing compounds from complex matrices, and continuous efforts in this research area should open more and more novel applications.