Two main categories of PMDs are recognized based on phenomenology: Paroxysmal dyskinesias (PxDs) are characterized by transient episodes hyperkinetic movement disorders, while attacks of cerebellar dysfunction are the hallmark of episodic ataxias (EAs)[2]. From an etiological point of view, both primary (genetic) and secondary (acquired) causes of PMDs are recognized. Some aspects of clinical history may help to distinguish primary from secondary PMDs: Most primary forms occur as sporadic or familial cases with autosomal dominant inheritance, and most often onset of manifestations is set in childhood or adolescence (Figure 1), and interictal neurological examination is unremarkable; secondary forms occur sporadically, more usually begin after the second decade of life (Figure 1), and clinical examination is frequently abnormal also outside of attacks. 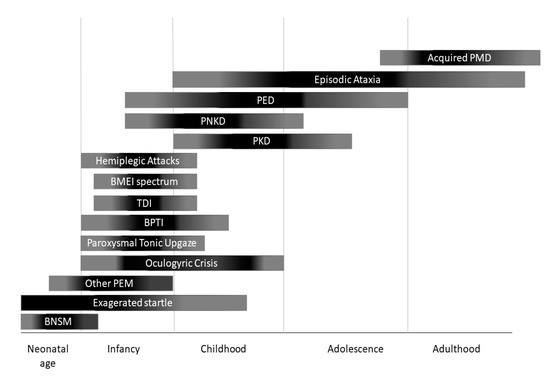 A further category that may manifest as PMDs are functional (psychogenic) movement disorders (FMDs). Patients with FMDs may show tremor, dystonia, myoclonus, parkinsonism, speech and gait disturbances, or other movement disorders whose patterns are usually incongruent with that observed in organic diseases, although sometimes diagnosis may be challenging. Diagnosis of FMDs is based on positive clinical features (e.g., variability, inconsistency, suggestibility, distractibility, and suppressibility) during physical examination and should be considered in presence of some clues such as intra-individual variability of phenomenology, duration and frequency of attacks, and/or precipitation of the disorder by physical or emotional life events. Other supporting information can be helpful (i.e., neurophysiologic and imaging studies)[3].

Recognition and diagnosis of PMDs are based on personal and familial medical history, physical examination, detailed reconstruction of ictal phenomenology (possibly including video-recording of at least one attack), brain magnetic resonance imaging (MRI), and genetic analysis. Neurophysiological (i.e., standard electroencephalogram or long-term monitoring) or laboratory tests are reserved for cases in which an epileptic origin of the attack cannot be excluded, or brain MRI reveals alterations that are compatible with genetic-metabolic or secondary causes. Genetic knowledge of PMDs has been largely incremented by the advent of next generation sequencing (NGS) methodologies, which allowed to increase both molecular diagnosis and identification of ultra-rare or new genes. The wide number of genes involved in the pathogenesis of PMDs (Table 1) reflects a high complexity of molecular bases of neurotransmission in cerebellar and basal ganglia circuits (Figures 2–4). This comprehensive review is focused on clinical and genetic features of PMDs according to current nosology (Table 2). As this review is mainly targeted on genetic causes of PMDs, functional PMDs will not be discussed further.

Table 1. Main genetic causes of paroxysmal movement disorders. A question mark follows treatment options that: have been proposed basing on pathophysiological assumptions, are under investigation or have been shown to be beneficial only in single-case reports.