1. Collagen in the Mitral Valve

The mechanical integrity of the mitral valve largely depends on its ECM composition, as the cells provide only little to no mechanical strength [1]. Along with elastic fibers, collagen fibers are the principal protein components of the valve ECM. While the elastic fibers play an essential role in mitral valve function, it is indeed the collagen fibers with the proper tensile strength to maintain tissue integrity during peak systole (~120 mmHg blood pressure applied over the surface of the human mitral valve). Additional structural components of the valve ECM include hydrophilic glycoprotein and glycan molecules that occupy turgid water-filled spaces in valve tissue. These hydrophilic molecules can occupy large regions of the valve leaflet as they do in humans or relatively little as is the case in the mouse mitral valve. They also work in concert with the collagen fibers in valve tissue throughout the cardiac cycle, particularly in chordae tendineae where they are thought to be essential for the molecular crimping (waving) and uncrimping (straightening) of these fibers as they are loaded and unloaded during systole and diastole [2].

Traditionally, valve leaflet tissue architecture is described as a three-layered structure, where the flow side contains elastic fibers and the non-flow side includes collagen fibers that sandwich a water laden middle layer, the spongiosa, acting in a cushion-like fashion to absorb the compressive forces due to coaptation. While conceptually useful, the model is not sufficient to fully appreciate the diversity that exists in different valve leaflets of the diverse animal model systems. For instance, the mouse mitral valve in some regions, is only 3–5 cells thick, with no clear demarcation between them, whereas the human mitral valve’s leaflets are hundreds of cells thick and can be categorized into six distinct zones according to their ECM composition (Figure 1) [3]. 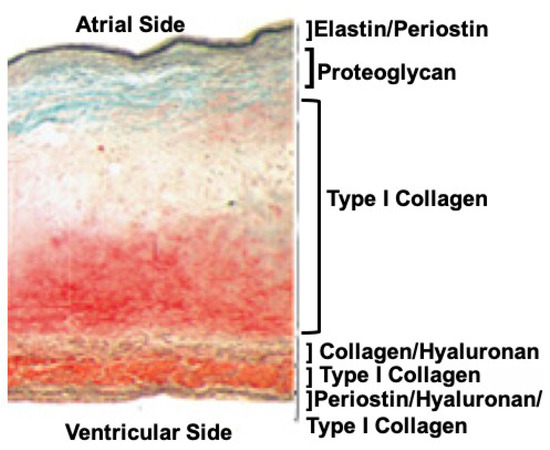 Figure 1. Cross-section of a normal human mitral valve leaflet stained with Movats reveals a sophisticated tissue architecture that can be categorized into at least six layers based on the ECM composition alone. Although collagen fibers are found throughout these layers, their structures (primary, secondary, and tertiary), and the proteins they associate with, can vary. Image was modified from [3].

While it is macroscopically unclear why the mammalian mitral valve has evolved into a unique bileaflet valve, mitral valve and its components are microscopically far more sophisticated than a simple, three-layered structure. For instance, collagen fibers are ubiquitous throughout all six layers of the valve leaflets, chordae, and the supporting papillary muscles. However, the density, diameter and subunits of the collagen fibers appear to be specific for each tissue subtype within the mitral valve [4]. It appears that collagen fibers’ diameter, orientation, and composition are adjusted for specific functions of papillary muscle tissue, chordae or the valve leaflets [2]. Further, we posit that this fine tuning of fibrillogenesis is carried out by valvular interstitial cells (VICs), which have genetic regulatory systems that rely on mechanical feedback to build and maintain the specific collagen architecture for each leaflet. VICs are fibroblast-like cells of mesenchymal origin that produce and remodel the mitral valve tissues’ ECM including all six layers of the leaflets and the chordae throughout the lifespan. Therefore, disruptions in either the genetic regulatory mechanisms or changes in mechanical forces can lead to adverse or maladaptive collagen fiber remodeling and ultimately mitral dysfunction.

2. Collagens, Fibrils, and Fibers of the Mitral Valve

“Collagen” is derived from the Greek word “kolla”, which means glue. Collagen proteins, as their name implies, are the glue that holds multicellular animals together. In fact, the diversification and expansion of the collagen gene family from the ancestral type IV-like collagen gene have been proposed to have enabled animal multicellularity and tissue evolution [5]. Since type IV collagen is normally found in the basement membranes’ ECM, it seems that the evolution of this structure was pivotal in the evolution of multicellularity. We suggest that the evolution of the collagen fibril-forming collagens provided the tensile strength necessary for the high-pressure perfusion systems found in tetrapods. In addition to those found in cardiac tissues, collagen fibrils are also found throughout the vascular system, and in prominent larger vessels, normally confined to the outer adventitial layer.

Collagen fibrils are collections of fibril-forming collagen molecules made of three alpha chains that form an intertwined triple helix. Collagen molecules auto assemble into hetero- or homotypic trimers of collagen propeptides while still in the endoplasmic reticulum. The C-terminal propeptides drive the nucleation of the triple helix as the trimer zips together from the C- to the N-terminus [6]. The procollagen molecules undergo additional processing around the time of deposition into the ECM environment. The removal of the procollagen domains by specific N- and C-terminal proteinases triggers fibrillogenesis, or the spontaneous polymerization of collagen molecules into fibrils. The C-terminal proteases are critical regulators of fibril formation, whereas the N-terminal proteinases are thought to regulate fibril shape and diameter [7]. As fibrils are formed, these macromolecular complexes can be recognized with transmission electron microscopy and display the classic D-periodic (65–67 nm) banding pattern (Figure 2). These fibrils then form higher order structures by bundling together into collagen fibers that vary in length and diameter depending on the tissue.

Figure 2. TEMs of the collagen fibers in in Hamburger Hamilton (HH) stage 42 chick (Gallus gallus) valve leaflets. The image in the right panel shows bundles of collagen fibrils arranged in two distinct originations. The fiber oriented in the plane of the figure (black arrow) displays the “D-period” striations. The fiber oriented into the plane of the figure (black arrowhead) shows the quasi-hexagonal arrangement of collagen fibers in cross-section.

In humans, the 28 collagen types are encoded by 43 genes with only types I, II, III, V, and XI form fibrils. All of these fibril-forming collagens are expressed in mitral valves during some point in development. Since fibrils can be composed of mixtures of these collagen types, it is likely that different combinations of collagen types confer different mechanical properties to the ECM of tissues. In the mitral valve, collagen fibrils in the atrial-facing elastic layer have combinations of types I, III, and V that are distinct from fibrils of the ventricular side of the leaflet and chordae [8].

The so-called fibril-associated collagens with interrupted triple helices, or FACITs, do not form fibrils but function to stabilize and connect fibrils to the other ECM components and resident cells. Of these types, IX, XII, and XIV have been found to be expressed in the mitral valve. Other collagen proteins such as type VI collagen directly interact with fibrils and regulate fibrillogenesis. In a process that resembles that of its namesake tendons, the large diameter, highly aligned, collagen fibers of the chordae develop into regular dense connective tissue in association with Col VI. Col VI is an unusual member of the collagen family that forms distinctive beaded microfilaments in the ECM. It appears to have a critical role in preserving the biomechanical properties of tissues that are under high physiological demand such as tendons and the mitral chordae [9].

During the development of mitral valve, cushions expand and elongate into functional leaflets. The chordae sculpted off the myocardial wall and remain largely composed of cardiomyocytes with very little ECM between them [3]. As the valve tissues mature, the cells of the chordae begin to express increasing amounts of periostin and fibril-forming collagens such as type I [10]. Interestingly, periostin expression is most intense at the myocardial tendinous junction. In mice, only 2 to 3 chordae are present at birth, whereas adults have 10 to 15 chordae.

Anatomically, in adults, the chordae emerge out of the anteriomedial and posteriomedial papillary muscles of the left ventricle (LV) with a few sparse collagen fibers found within myocardium of the papillary muscles. Large collagen fibers isotropically arrange within the inner core of the chordae to provide the major tensile strength. The collagen fibers of the inner core are wrapped by two layers of elastin [11], creating a unique viscoelastic tissue with complex mechanical properties. The anterior and posterior mitral leaflets have marginal, basal, and struts of the chordae that connect the leaflets to the papillary muscles. These chordae vary in diameter, with the marginal chordae having the smallest and the strut chordae having the largest diameter. These chordae also differ in collagen composition and organization, with marginal chordae having a smaller fibril diameter and a higher fibril density, while strut chordae exhibit a larger average fibril diameter and a lower fibril density [2]. Accordingly, the different chordae types vary in their mechanical behaviors, with the marginal chordae being less extensible and stiffer than basal and strut chordae [12]. This indicates that the individual chordae may have specific roles during mitral valve coaptation.