Pre-grouting as an effective means for improving the stability of roadways can reduce maintenance costs and maintain safety in complex mining conditions. In the Guobei coal mine in China, a cement pre-grouting technique was adopted to enhance the overall strength of soft coal mass and provide sufficient support for the roadway. However, there are very limited studies about the effect of grouting on the overall strength of coal in the laboratory.

The stability of tunnel projects is seriously affected by complex geological conditions such as water inflow, loose soil, fractured rock, etc. Grouting technique as an effective way to improve the integrity and continuity of geomaterials has been widely used in such poor conditions [1][2][3]. Among all grouting methods, the pre-grouting is commonly applied to ensure excavations safely and effectively, when tunneling in fractured rock mass or loose stratum [4]. The main function of pre-grouting is to increase the mechanical properties such as the overall strength (cohesion and friction angle) and stiffness of soft soil and rock mass before excavating tunnels [5]. The injected grout can fill the fractures in the rock and the voids in the soil, obstructing the penetration of water and enhancing the bearing capacity of surrounding strata [6]. Normally, cement-based grouts are used more often than any other materials in tunnel injection due to their characteristics of high strength, durability, ample source, and low costs [7].
Different from tunnels in rock or near-surface geotechnical level, roadways driven in coal seams for returning air and transporting coal out of the panel in deep underground coal mines are always exposed to worse surrounding conditions [8][9][10][11][12]. The structural and mechanical properties of coal mass are dramatically degraded by the widely developed fractures, especially under deep burial and tectonic activities conditions [13]. In the Guobei coal mine in China, coal seams were subjected to complicated geological movements in the history yielding in substantial fractures and cracks in coal mass, which engendered extremely soft raw coal with low strength [14]. During the progress of the roadway excavation, the disturbance on soft coal mass results in collapse and localized failure at the driving face [15]. In the case of supporting such soft strata, the conventional supporting methods such as the bolting system, U-shaped steel with shotcrete could not control the large deformation effectively [16]. To address this problem, as per the experience of pre-grouting reinforcement in coal panels [17], and preventing groundwater inflow in the roadway [18] and jet grouting enhancement [19][20][21], a cement pre-grouting method was adopted to improve the overall strength of the soft coal mass and provide sufficient support for the roadway (shown in Figure 1). The strength improvement of soft coal mass after cement pre-grouting is a significant indicator to evaluate the grouting effect, which can be used for guiding the design of grouting parameters.

Figure 1. The pre-grouting technique used for soft coal seam in the Guobei coal mine and the formed coal mass-grout column in practice.
There are some studies on the evaluation of rock or soil improvement owing to cement grouting. Several researchers focused on conceptual consolidated models after cement injection [22]. Besides, other studies were interested in the quantitative evaluation of quality improvement of grouted rock and soil by field and laboratory tests [23][24][25]. For example, in situ dilatometer tests were conducted in rock before and after grouting to quantitatively examine the deformability of rock [26]. The shear strength of rock joint filled with injected cement was studied in the laboratory to assess the overall strength development [27]. The strength properties of soil after grouting treatment were investigated experimentally [28]. However, according to the diffusion of cement grout in soft coal mass in the field (Figure 1), to the authors’ knowledge, quantitative research on the strength development of the formed coal mass-grout column is very limited. An effective way to estimate the strength of such a coal-grout structure is a shear test in the laboratory because it can comprehensively reflect the structures’ stress conditions and easily obtain mechanical parameters such as cohesion and friction angle.
Therefore, according to the field observation of cement grouting to soft coal mass, this study focuses on investigating the grouting effect on the overall strength improvement of soft coal in a quantitative way. Different coal-grout models were designed and examined by laboratory shear tests. The shear properties (failure modes, deformation characteristics, shear strength, and shear stiffness) of coal and grouted coal specimens were examined. A set of linear regression formulas were proposed to predict the cohesion, friction angle and stiffness of grouted coal mass. Besides, the microscopic structure of the coal-grout interface and its effect on the failure characteristics were discussed. Based on the experimental results and microscopic observation, some methods for further improving the overall strength and stiffness of grouted coal mass were suggested.

2. Discussion on Grouting in Coal Mass

2.1. Microstructure of the Coal–Grout Interface

The overall shear strength and stiffness of grouted coal is affected by the interface between coal and grout. Analyzing the microscopic interfacial structure is helpful to reveal the failure mechanism of the specimen. The scanning electron microscopic (SEM) image on the surface of grouted coal is shown in Figure 2. As illustrated in Figure 2a, there was a primary interface between the coarse-grained coal layer and the fine-grained grout layer. The primary interface was not completely surface contact, but instead comprised irregular point contacts that could result in a relatively weak and discontinuous bonding force. Furthermore, microscopic observations indicated that there was an intermittent secondary interface near the coal layer (Figure 2b). It contained one or more interface branches. Between the primary interface and secondary interface, the intermediate layer like a “transition zone” was generated (shown in Figure 2b–d). Besides, the two mediums considerably differed from each other in microcracks. As shown in Figure 2b, many major cracks were in the coal layer between coal particles and coal matrix, compared with a few minor cracks in the grout layer. This indirectly verified the reason why grout has higher strength and stiffness when it suffers shearing.

The failure process of a rock or coal sample can be seen as a successive evolution of cracks at the mesoscopic level [33][34]. As for the coal and grouted coal, the appearance, propagation, and coalescence of mesoscopic cracks resulted in their failure, when they suffered shearing. Figure 3 shows images of typical failure patterns of the specimen after shear tests. As described above, there were three typical failure modes for coal and grouted coal. In Figure 3a, it illustrates a smooth shear plane in pure coal sample, corresponding to the failure type I. The composite failure type II for the grouted coal is depicted in Figure 3b. A relatively rough shear plane was formed. Tension cracks can be found on the surface from both Figure 3a,b. Based on the shear stress-displacement curves for failure I and II, a gentle process by the development and coalescence of cracks in coal and grout can be deduced during the shearing. When grout percentage and/or normal stress increased, the failure of the specimen is shown in Figure 3c, which corresponds to the failure type III. The coal around the solidified grout was fragmentized. A small part of coal stuck on the surface. The “coal-grout interface layer” described above became weak and crushed when it suffered high stress. In this case, the combination of coal and grout was no longer stable. Hence, the cracks in external coal coalesced and failed, then the fragmentized interface layer induced a stress drop followed by the propagation and coalescence of cracks in the grout. It is characterized by multi-stage failure (or non-simultaneous failure). 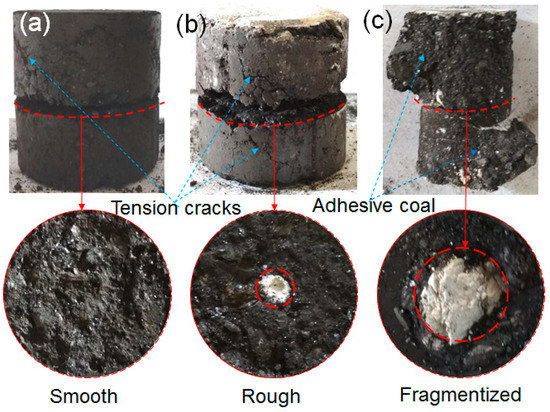 As discussed above, the cement grouting can significantly improve the strength and stiffness of soft coal. The formed cement column can be seen as effective support for compacted surrounding coal mass. The overall mechanical parameters (strength, stiffness, cohesion and friction angle, etc.) of grouted coal can be predicted by the linear regression formulas we proposed in this paper. In practice, according to the effective compacting grouting diameter, the overall strength and stiffness of grouted coal mass in a certain range can be identified. In this case, the safe and economic pre-grouting parameters such as the number of grout holes and the amount of grout can be designed qualitatively instead of designing by experience.
Moreover, the cracked interface layer between coal and cement grout played a negative effect based on the analysis of the microscopic coal-grout structure and the macroscopic failure characteristics of the specimen. The failure is characterized by the sudden stress drop and decline of strength and stiffness. The possible reason is that the relatively large cement grains could not penetrate the coal layer effectively. Some point contacts between cement and coal resulted in a potentially unstable bonding structure. The main function of cement consolidation grouting is to improve strength for large fractures and cracks in coal mass instead of micro-cracks [35]. On the other hand, the shrinkage of cement resulted in a “broken zone” called “coal-grout interface layer”. The crushed interface layer affected the overall stability of the coal-grout structure. Cement drying shrinkage significantly affected the durability and integrity of a structure [36][37]. To solve the shrinkage problem, shrinkage-compensating cement can be used to fill the gaps and enhance structural stability over ordinary cement [38][39]. Also, the use of cement grouts containing supplementary cementitious materials (SCMs) is also an effective way to solve the shrinkage [40][41]. Therefore, in the field, ultra-fine cement, the shrinkage-compensating or SCMs cement could be good choices for pre-grouting to further improve the stability of grouted coal mass.