Epithelial ovarian cancer is a highly lethal gynecological malignancy that is characterized by the early development of disseminated metastasis. Though ovarian cancer has been generally considered to preferentially metastasize via direct transcoelomic dissemination instead of the hematogenous route, emerging evidence has indicated that the hematogenous spread of cancer cells plays a larger role in ovarian cancer metastasis than previously thought. Considering the distinctive biology of ovarian cancer, an in-depth understanding of the biological and molecular mechanisms that drive metastasis is critical for developing effective therapeutic strategies against this fatal disease. The recent “cancer stem cell theory” postulates that cancer stem cells are principally responsible for tumor initiation, metastasis, and chemotherapy resistance.

Epithelial ovarian cancer is the most lethal cause of death among gynecological malignancies and is characterized by an early metastatic spread throughout the peritoneal cavity, along with extensive disseminated tumors, omental caking, and accumulation of malignant ascites [1][2]. The high mortality and low survival rate in ovarian cancer can be attributed to its nonspecific symptoms that generally manifest only after progression to an advanced stage, as well as the fact that only few women are diagnosed before cancer metastasis to the peritoneal cavity or distant parenchymal organs [3][4][5]. Though most patients with the advanced stage of the disease may respond to a combination of taxane and platinum-based chemotherapy, chemoresistant residual cancer cells can persist in metastatic sites, where they remain dormant for prolonged periods after initial therapy and eventually lead to a relapse [6][7][8]. Despite ongoing efforts in developing extirpative surgery and intensive combination chemotherapy, long-term clinical outcomes in patients with advanced ovarian cancer have not significantly improved over the recent decades [9][10][11].
The cancer stem cell theory has been recently postulated and states that cancers are composed of hierarchies of cells sustained by tumor-initiating cells, conceptually termed cancer stem cells, with distinct phenotypes and a high tumorigenic potential [12][13]. Inherently, cancer stem cells possess the ability to self-renew and differentiate into multiple lineages of differentiated cancer cells, thereby establishing both a phenotypic and functional heterogeneity in the hierarchical organization of tumors [14][15]. Additionally, a large body of research indicates that a subpopulation of cancer stem cells is practically responsible for driving metastasis, therapy resistance, and the relapse of cancers [16][17]. In regard to ovarian cancer, Bapat et al. provided the first evidence for the existence of ovarian cancer stem cells in the malignant ascites in 2005; thereafter, extensive efforts have been made to evaluate the biological mechanisms that regulate ovarian cancer stemness [18]. Clinically, ovarian cancer stem cells have been shown to survive conventional chemotherapy, which generally targets rapidly dividing cancer progenitor cells or more differentiated cancer cells. This small population of cancer stem cells then gives rise to chemoresistant recurrent tumors at metastatic sites [9][19]. Given the distinct biology of ovarian cancer stem cells, an elucidation of the cellular and molecular mechanisms underlying cancer metastasis and chemotherapy resistance, with a central focus on the ovarian cancer stem cells, will shed light on novel therapeutic strategies that can improve clinical outcomes in patients with advanced ovarian cancer.

2. Identification and Characterization of the Ovarian Cancer Stem Cell Population 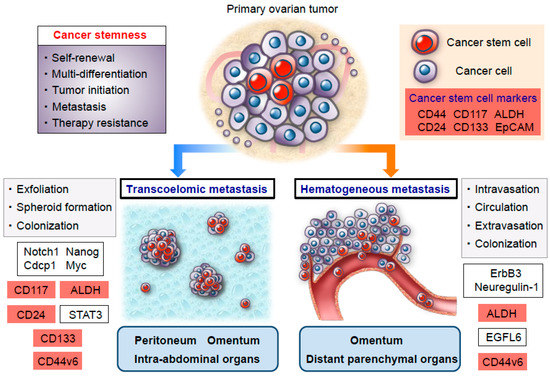