Oxidative Strong Metal–Support Interactions (OMSI) can be defined as a phenomenon occurring in a supported metal catalyst that is triggered by oxidative (or non-reductive) conditions with the typical features resembling that of SMSI, including 1) small-molecule of CO or H2 adsorption on metal will be signiﬁcantly suppressed, 2) the support would encapsulate metal particles, 3) electron transfer from metal to the support, and 4) a reversal of the above phenomena following reduction treatment.

Strong metal-support interaction (SMSI) is a phenomenon discovered by Tauster et al in the late 1970s, that TiO2 supported Pt-group metals will lose their capability to adsorb small molecules (such as CO and H2) following high-temperature reduction. [1][2] SMSI between Pt-group metals and reducible oxides has continuously been studied in both catalysis application and surface science for the next three decades, and the understanding on it has progressed significantly. The classical SMSI theory thus developed, based on which the SMSI-active catalyst system was limited. Au (and IB group metals), with a relatively lower work function and surface energy respect to Pt-group metals, had thus been regarded as SMSI-inert for a long time. [3][4][5][6]

A breakthrough came from Mou’s group in 2012.[7] They found an oxygen-induced SMSI phenomenon in an Au/ZnO-nanorod catalyst, that, following oxidation under 300 °C, the Au nanoparticles will be encapsulated by ZnO accompanied by electron transfer from Au to the support, which will be reversed by hydrogen treatment. This work, for the first time, not only extended the conditions for evoking SMSI but also opened a prelude for the study of SMSI in Au-based catalysts. Only about four years later, a similar oxidative SMSI phenomenon was revealed by Tang et al. in nonoxide (hydroxyapatite and phosphate)-supported Au catalysts, expanding the territory of SMSI to the non-oxide support system.[8] Furthermore, in 2018, they confirmed that the nonoxide- and ZnO-supported Pt-group metals are also applicable for this oxygen-induced SMSI, and formally proposed the concept of “oxidative strong metal–support interactions (OMSI)” to distinguish from classical SMSI, which was triggered by reductive conditions.[9] It has been proved that controlled OMSI is effective in tuning the catalyst performances,[7][8][9][10] and a few discoveries inspired by OMSI were consecutively reported thereafter, such as uncovering the classical SMSI between Au (actually the IB group metals) and TiO2, and SMSI between Au and layered double hydroxide support.[11][12]

OMSI has not only shed new light on the understanding of SMSI phenomena but also provided new opportunities for the design and development of high-performance catalysts, thus becoming an important part of the generalized SMSI field.

2. Features, and Catalyst Systems of OMSI

OMSI can be defined as a phenomenon occurring in supported metal catalyst that triggered by oxidative (or non-reductive) conditions with the typical features resemble with that of SMSI. Current OMSI systems involve ZnO-nanorod supported Au, nonoxides (hydroxyapatite and phosphate) supported Au and Pt-group metals, and ZnO supported Pt-group metals (Figure 1). The common characteristics of OMSI evoked by high-temperature oxidation (or an inert atmosphere) can be summarized as: (1) small-molecule of CO or H2 adsorption on metal will be significantly suppressed; (2) mass transport that the support would encapsulate metal particles; (3) electron transfer from metal to the support resulting in a positively charged metal species; and (4) a reversal of the above phenomena following reduction treatment. The comparison of the inducing conditions and main characteristics of OMSI and the classical SMSI was listed in Table 1. 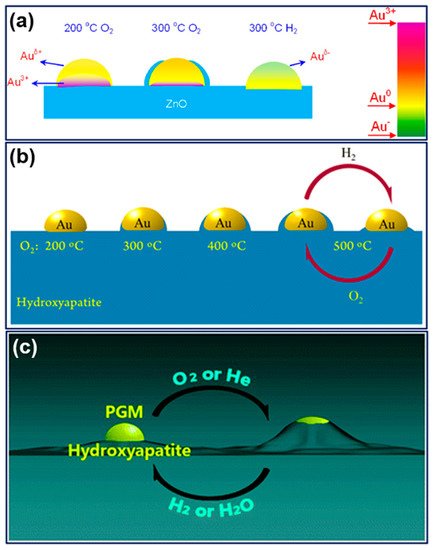 3. Identification and Characterization of OMSI

The abovementioned four typical features are also the criteria for the identification of OMSI occurrence, which generally needs a combination of multiple characterization methods to confirm.

One of the most typical spectroscopic techniques is the in situ molecular probe infrared (IR) spectroscopy. Due to site-specific sensitivity in detecting the adsorption property of metal surface, it has been popularized in heterogeneous catalysis and become an indispensable approach to measure adsorption behavior of catalysts in the SMSI study.[13][7][8][9][10][11][12][14]

Tang et al. carried out an in situ diffuse reflectance infrared Fourier transform spectroscopy (DRIFTS) measurement of CO adsorption on Au/HAP treated by high-temperature oxidation under different temperatures, an instructive case for the application of IR spectroscopy to the identification of OMSI.[8] As shown in Figure 2a, the bands at 2102~2110 cm−1 were ascribed to the CO adsorbed on the Au surface (CO-Au). Similar measurements were further carried out to prove the reversible suppression of chemisorption on Pd/HAP and Pt/HAP by high-temperature oxidation/reduction, confirming the occurrence of OMSI in Pt-group metal-based catalysts (Figure 2b,c).[9]

Mass transport in OMSI mainly refers to the reversible encapsulation of metal by the deformed support, which generally can be intuitively observed by high resolution transmission electron microscopy (HRTEM). In 1985, Singh et al. directly observed a thin overlayer on the Rh surface through HRTEM in Rh/TiO2 where SMSI occurred, thus inferring that the overlayer inhibited the adsorption of small molecules on the catalyst.[15] Since then, the SMSI-provoked encapsulation phenomenon has been found in various catalysts, becoming an essential basis for identifying the occurrence of SMSI, and HRTEM thus became indispensable.

By HRTEM, Tang et al. found that the coverage of HAP on Au nanoparticles depended on the calcination temperature.[8] As shown in Figure 3a–e, the encapsulation layer on the surface of Au nanoparticle appeared when the Au/HAP calcined at 300 °C, then the layer gradually spread as the calcination temperature increased, and finally completely wrapped the Au nanoparticle after being calcined at 600 °C. By subsequent treatment under pure H2 at 500 °C, the encapsulation layer retreated (Figure 3f).

Verifying the composition of the encapsulation layer is critical to concrete the mass transport of the support. For most SMSI or OMSI systems, the encapsulation layer is generally amorphous, which could not be determined by measuring the lattice spacing. The electron energy loss spectrum (EELS) is powerful to analyze the composition and the element valence of materials, thus has long been used in SMSI studies.[16][17][18] For instance, the cover layer on Au nanoparticles in the Au/HAP calcined at 600 oC was detected by EELS and the result (Figure 3g) showed the layer was composed of P, Ca and O, confirming it was derived from the HAP support.[8]

Generally, the electron transfer during OMSI is mainly manifested by the perturbation in the valence state and the change in electronic structure of the supported metal, which can be examined by element-specific spectroscopic techniques that are sensitive to chemical state and atomic structure. Earlier for the research of classical SMSI, X-ray photoelectron spectroscopy (XPS), ultraviolet photoelectron spectroscopy (UPS), and Auger electron spectroscopy (AES) have been employed in characterizing the high-temperature reduction-induced chemical state changes of metal.[19][20][21][16][17][22][23] The aforementioned CO-probed IR spectroscopy can also be used to testify the phenomenon of electron transfer as it is sensitive to the metal electronic structure. On the other hand, the electron transfer that accompanied by the support deformation at interface will inevitably impact the surface local coordination structure of the support. For the oxide support-based catalysts, the SMSI- or OMSI-induced electron perturbation can be verified by electron paramagnetic resonance (EPR), a technique sensitive to species with unpaired electrons such as oxygen vacancies or metal ions in paramagnetic valence states.[24][25][26][27] The metal atom-centered local coordination structure that strongly depends on the interaction between metal and the support can be examined by X-ray absorption spectroscopy (XAS), which is also necessary in SMSI and OMSI studies.[22][28][29]

4. Application and Influence of OMSI

The SMSI effect is able to alter the catalyst properties of the adsorption capacity, interface structure, and the electronic state, thus it has been extensively applied to enhance the catalyst performance for diverse reactions and recognized to be a highly effective method currently.[14][30][31][32][33][34][35][36][37][38][39][40] Admittedly, realizing the appropriate state of SMSI for different reactions is critical and difficult, which is limited by the precondition for the initiation and maintenance of SMSI. For instance, high-temperature reduction or a reductive atmosphere is prerequisite for classical SMSI, therefore the application of classical SMSI in non-reducing conditions is constrained. On this premise, discovery of the OMSI effect will enrich the potential application of the metal–support interaction under specific conditions to a large extent. On the other hand, OMSI truly broadens the territory of metal–support interaction, inspiring more explorations on similar phenomena that occurred in catalysts with multiple metals and supports and evoked by various conditions. This is of great value in in-depth cognition of metal–support interaction and catalytic mechanism.

When OMSI was evoked and the encapsulation layer formed, metal nanoparticles were restrained on the support, thus they will be prevented from aggregation or leaching during reaction. Tang et al. compared the recycle performance of Au/HAP catalysts calcined at 200 and 500 °C for the selective oxidation of benzyl alcohol.[8] As shown in Figure 4a,b, both conversion and selectivity of the catalyst calcined at 500 °C (Au/H-500) remained unchanged after five cycles of use, and no Au loss was detected. However, the Au/HAP that calcined at 200 oC (Au/H-200) without encapsulation layer formed has seriously deactivated in the first three reaction cycles, and the used catalyst showed sintered Au nanoparticles and decreased loading. Similarly, reusability of Pd/HAP for Suzuki cross-coupling was significantly enhanced by calcining at 500 oC (Figure 4c).[9] Moreover, as shown in Figure 4d, Pt/HAP calcined at 500 oC (Pt/HAP-O) exhibited excellent durability under a simulated auto-emission control reaction condition, that the CO oxidation conversion kept unchanged during a 40 hour test under 400 oC, which is distinctly better than the Pt/TiO2 reduced at 500 oC (Pt/TiO2-H500, where classical SMSI formed) that deactivated severely in the first 5 hours.[9] These evidently demonstrated the formation of OMSI can effectively inhibit the leaching and aggregation of metal species during reactions in liquid-phase or under elevated temperature with oxidative atmosphere, which is of great importance for practical application.

Catalyst activity mostly depends on the interface sites, which would be impacted by encapsulation when SMSI was evoked. Meanwhile, limited by the support type, catalysts that are able to form SMSI may not be particularly active for certain reactions, although the stability can be enhanced. Controlled SMSI state therefore is needed to obtain catalysts with both improved stability and activity. Commendably, Tang et al. developed an ultrastable Au nanocatalyst with high activity by tuning the OMSI between Au and the composite support TiO2-HAP.[10] As shown in Figure 5, the Au nanoparticle was located at the interfacial regions between the TiO2 and HAP. 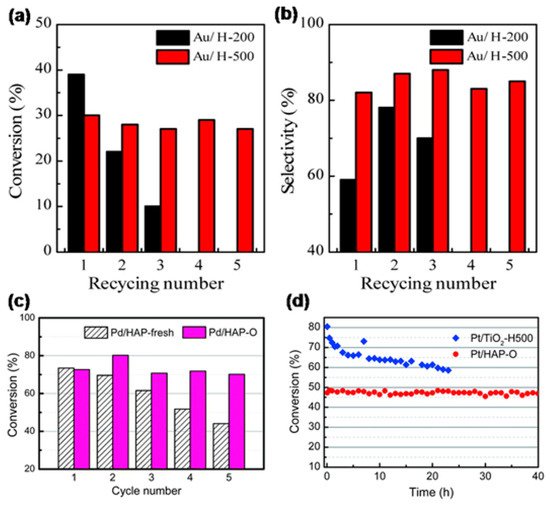 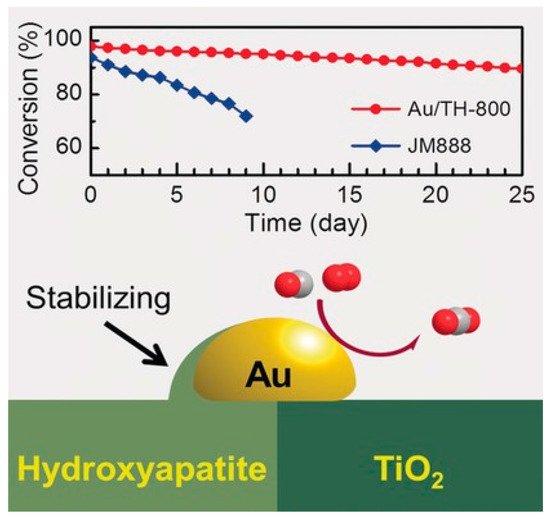 Figure 5. Schematic illustration of TiO2-HAP supported Au nanocatalyst with high stability owing to the OMSI between Au and HAP with TiO2, where the upper part shows CO conversion versus reaction time of the Au/TH-800 and commercial three way catalyst JM888 at 400 °C. Reproduced with permission from [10], copyright: 2016 John Wiley and Sons.

4.2. Discoveries Inspired by or Based on OMSI

Tang et al. synthesized TiO2-supported Au nanocatalysts and further investigated their adsorption performance, mass transport, and electronic state changes under high-temperature reduction, unequivocally uncovering a classical SMSI in Au/TiO2 (Figure 6), and further extended to other reducible oxide (such as CeO2 and Fe3O4)-supported Au and TiO2-supported IB group metal (Ag and Cu) catalysts.[11] This work is a pivotal breakthrough in promoting SMSI research that verified the universality of the classical SMSI phenomenon and complemented the catalyst system of metal–support interactions (Figure 7). Based on this work, more recently, the size-dependency of classical SMSI was further revealed in Au/TiO2 nanocatalysts, where larger Au particles are more prone to be encapsulated than smaller ones, which brings an in-depth understanding of the SMSI phenomenon and provides a new approach to refine catalyst performance.[14] 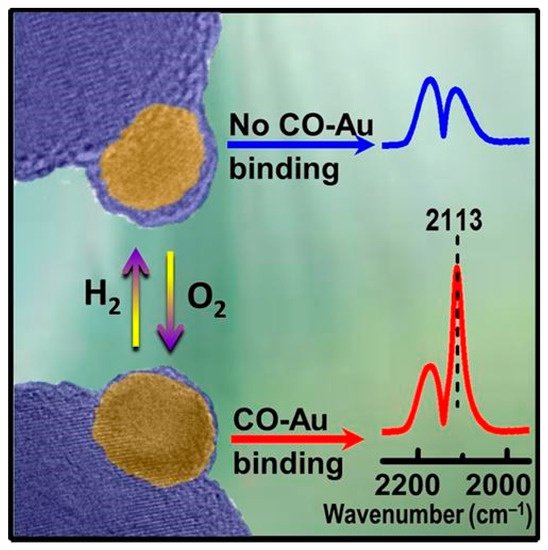 Figure 6. Schematic illustration of the classical SMSI phenomenon in Au/TiO2. Reproduced with permission from [11], copyright: 2017 by the American Association for the Advancement of Science. 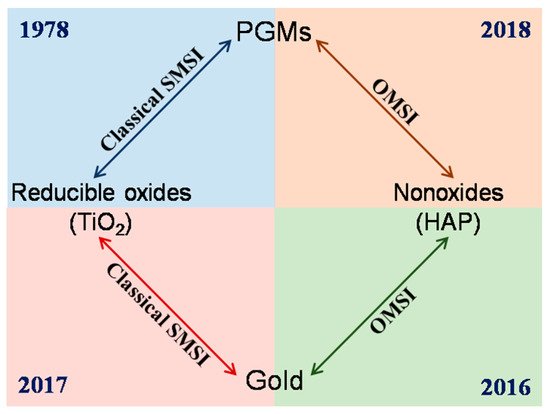 Figure 7. Schematic illustration of the catalyst systems for classical SMSI and OMSI.