The muskrat is a neozoon species that has occupied many countries of continental North Europe after its introduction from north America as fur animals. Due to its burrowing activity it damages river and canal banks and structures of flood control. For this reason, the eradication of this alien species is recommended. Muskrats are also of parasitological interest since they can act as suitable intermediate hosts for Echinococcus multilocularis. On the other hand, little is known on the other helminths that infect muskrats. A total of 130 muskrats of different age groups trapped in different habitats in the Barnim district of the Brandenburg state by a professional hunter were examined for parasites and seven trematodes (Echinostoma sp., Notocotylus noyeri, Plagiorchis elegans, Plagiorchis arvicolae, Psilosostoma simillimum, P. spiculigerum, Opisthorchis felineus and four larval cestode species (Hydatigera taeniaeformis, Taenia martis, Taenia polyacantha, Taenia crassiceps) were detected. Larval stages of E. multilocularis were not found. O. felineus was found for the first time in muskrats in Germany. All the named parasites were present in Europe prior to the introduction of muskrats. With a prevalence of 48.9%, Strobilocercus fasciolaris, the larval stage of the cat tapeworm, H. taeniaeformis, was the most frequent parasite found in adult muskrats.

The muskrat (Ondatra zibethicus) is a medium sized semiaquatic, herbivorous rodent which is native to North America and inhabits wetlands, river banks, irrigation channels, lakes, ponds, coastal areas and estuaries. To be protected from predators, muskrats place the entrance to their burrow below of the water level. In shallow water, muskrats construct lodges using plant material. Three female and two male muskrats had been introduced to Bohemia in Czech Republic as fur animal and for hunting purposes. The current muskrat population in Germany is based on these five animals (according to other sources five pairs of muskrats were released [1]). Due to its reproduction potential and the migration behavior of this animal species, muskrats had occupied territories in southern Germany already in 1928. Already two years later, muskrats were seen in territories that today belong to Thuringia, Saxony, Saxony-Anhalt and Brandenburg [2]. It is documented that muskrats were also released in England but were eradicated later on. Papers on helminth parasites of muskrats in Karelia [3] and in Siberia [4] suggest that muskrats were also introduced to Russia. Muskrats have also occupied territories in northern Mongolia, north-eastern China, North Korea and Honshu Island of Japan [1].
Due to its burrowing activity (it damages river and canal banks and structures of flood control) feeding damage in field crops and feeding on the protected freshwater pearl mussel and other mussel species, the muskrat is listed by the Inventory of Alien Invasive Species in Europe [5] as one of the worst invasive species in Europe and is recommended for eradication by the Bern Convention on the Preservation of European Wild Plants and Animals and their Natural Habitats [6].
In Germany, foxes, otters, minks, polecats, birds of prey and nowadays raccoons and raccoon dogs are the main predators and this predator-prey-relation reflects on the parasite fauna of muskrats.
Investigations on Echinococcus multilocularis in the Brandenburg state of Germany in the 1990s revealed that this zoonotic tapeworm can be found in red foxes [7] but the involvement of small mammals as intermediate hosts in the Brandenburg state was not investigated. Already Abuladze [8] mentioned findings of larval stages of. E. multilocularis in muskrats in the 1950th in Russia and listed 42 other intermediate host. Although muskrats are not the first choice of food for red foxes, they might be an indicator for the occurrence of the fox tapeworm since the lifespan of muskrats is longer than that of voles and mice the preferred food of foxes.
The aim of this paper was to examine the helminth fauna of muskrats in the Barnim district of the Brandenburg state of Germany under special attention to cestode metacestodes.

Of the 130 examined carcasses, 73 contained parasites. Thirty-eight muskrats harbored one parasite species. Two and three different parasite species were found in 27 and 7 muskrats, respectively, and four parasite species were found in a single animal only. Examination of 57 carcasses did not reveal parasites. In 28 (=53.8%) juveniles, 14 (45.1%) subadults and 15 (26.3%) adults no endoparasites were detected.
The endoparasite fauna of muskrats in the Barnim district of the Federal State of Brandenburg consisted of seven trematodes: Echinostoma sp. (Figure 1 and Figure 2), Notocotylus noyeri (Figure 3), Plagiorchis elegans (Figure 4), Plagiorchis arvicolae (Figure 5), Psilotrema simillimum (Figure 6), P. spiculigerum, Opisthorchis felineus (Figure 7) and four larval cestodes (Hydatigera taeniaeformis (Figure 8 and Figure 9), Taenia martis (Figure 10 and Figure 11), Taenia polyacantha (Figure 12 and Figure 13), Taenia crassiceps (Figure 14) (Table 1). Larval stages of E. multilocularis were not detected. All trematodes except the bile duct parasite O. felineus inhabited the small intestine. Strobilocerci of H. taeniaeformis were located in the liver while other metacestodes were found between intestinal lopes in the abdominal cavity. 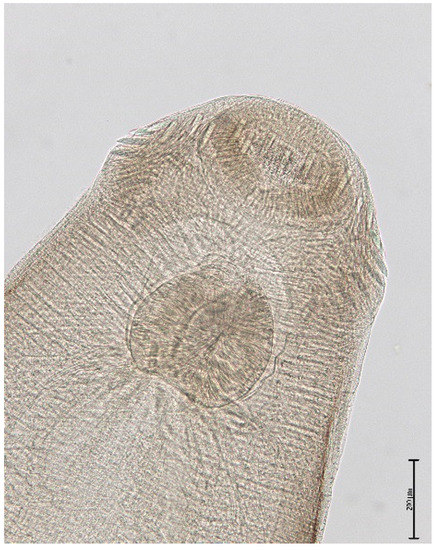 Figure 3. Plagiorchis elegans. Yolk glands form a bridge prior to the ventral sucker and reach the level of the pharynx. Bar: 500 μm.

Figure 5. Notocotylus noyeri. There is no ventral sucker but there are three rows of ventral glands. Testes and ovary are situated at the posterior end. Branches of the uterus reach laterally to yolk glands. Bar: 500 μm. 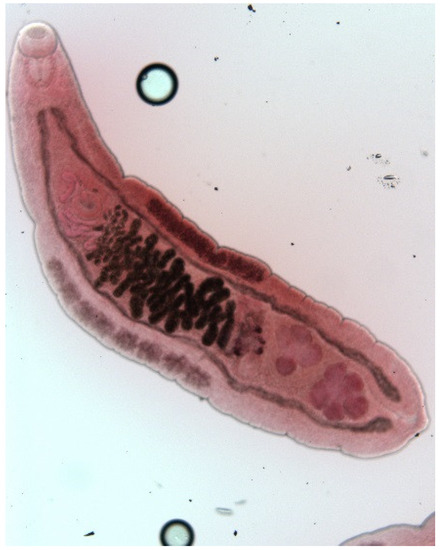 Figure 7. Opisthorchis felineus. Deeply lobed testes are situated at the posterior end. The uterus between ovary and ventral sucker does not overlap intestinal branches. 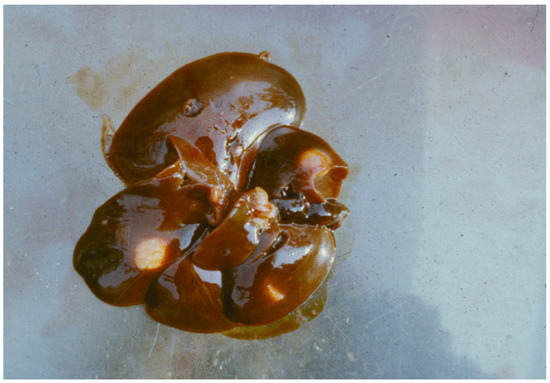 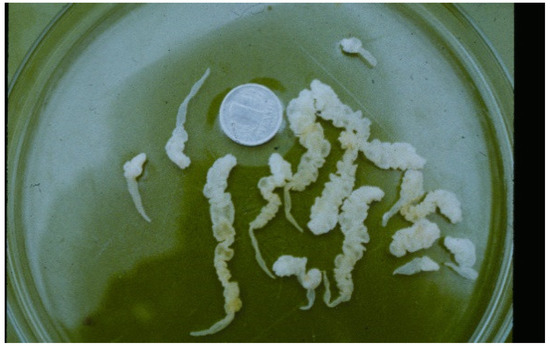 Figure 10. Larval stages of Taenia martis removed from abdominal cavity of a muskrat. 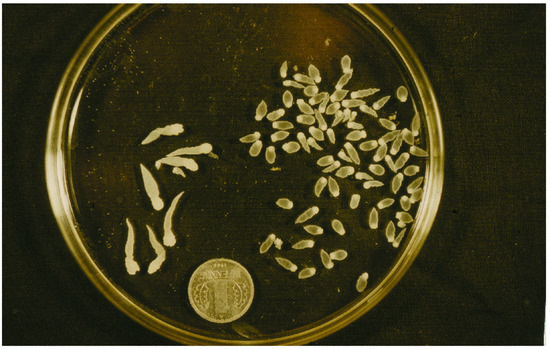 Figure 12. Larval stages of Taenia polyacantha removed from thorax of a muskrat. 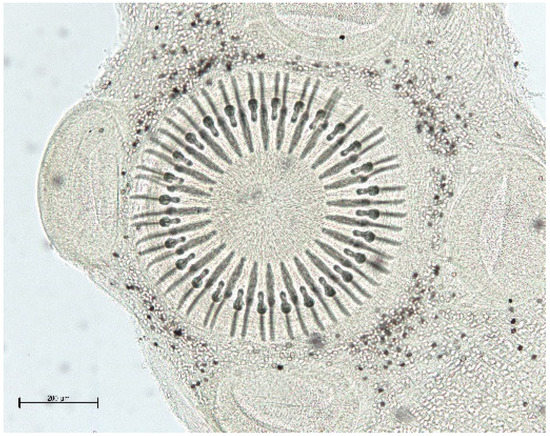 Figure 14. Taenia crassiceps scolex.
Of the 73 positive muskrats, 43 were infected with one, 22 with two, 7 with three and one with four helminth species. A total of 40 animals showed Taeniidae metacestodes. Of the 30 cases of liver strobilocercosis, 23 occurred in adult, four in subadult and three in juvenile hosts. In two adult muskrats H. taeniaeformis larvae were found in combination with T. martis larvae. Eight muskrats (five adults, two subadults and one juvenile) harbored T. martis. In addition to the above mentioned mixed infection with H. taeniaeformis strobilocerci, another animal showed a combination of T. martis and T. polyacantha. T. polyacantha and T. crassiceps metacestodes were found in four and one animal, respectively. All these five muscrats were classified as adults.
Table 1. Helminth findings in muskrats originating from different habitats in the Barnim district.