Gibberellins (GAs) are an important group of phytohormones associated with diverse growth and developmental processes, including cell elongation, seed germination, and secondary growth.

Korean ginseng (Panax ginseng C.A. Meyer) has been used as an important medicinal plant species for thousands of years in Asia, especially in Korea, Japan, and China [1]. Ginseng has the ability to increase immunity and vitality and to prevent aging, and its pharmacological effects have been proven through clinical trials and animal experiments [2]. Studies on ginseng have focused primarily on its pharmacological effects in humans; however, its unique physiological and developmental characteristics have rarely been explored thoroughly due to its perennial heterozygous nature [3]. The application of functional genomic approaches in ginseng has been challenging because of its unique physiological and ecological characteristics and the lack of genomic information [4,5], which could be attributed to its relatively large genome (3.2 Gbp), heterozygous allotetraploid nature (2n = 4x = 48), and significant amounts of repetitive DNA [6,7].
Plants, as sessile organisms, induce a variety of physiological changes in response to adverse environmental conditions. Plant hormones function as master regulators of growth and development under unsuitable external environments [8]. Gibberellins (GAs) are tetracyclic diterpenoid hormones that play essential roles in seed germination, flowering, pollen maturation, stress tolerance, secondary growth, and development [9,10,11]. Recent studies have shown that there are complicated internal and external signaling interactions of GAs and various hormone pathways, including auxin, abscisic acid (ABA), jasmonic acid (JA), ethylene, and cytokinin. These interactions are highly relevant to plant growth, development, and stress tolerance [12,13,14]. Major GA signaling components have been identified through genetic studies on model plant species, including rice (Oryza sativa) and Arabidopsis thaliana. The nucleocytoplasmic GA receptor gibberellin-insensitive dwarf1 (GID1) was first identified in rice through studies on gibberellin-insensitive dwarf mutants [15]. OsGID1 and AtGID1s have been characterized as water-soluble GA receptors that exhibit strong binding affinity for bio-active GAs [15,16]. At the C-terminus, GID1 harbors a well-conserved α/β-hydrolase domain, which belongs to the carboxylesterase family of plant proteins [17,18]. The canonical GA signaling pathway is initiated by direct binding of active GAs to GID1 in the nucleus. The GA–GID1 complex induces rapid degradation of the major growth-inhibitory factor DELLA through direct protein–protein interactions [12,19]. DELLAs are key transcriptional repressors that inhibit GA signaling and plant growth. Degradation of DELLA proteins requires both GID1 and the F-box protein SLY1 (SLEEPY)/GID2 [15,20,21,22]. In the presence of GA, DELLA is recognized by the SCFSLY1/GID2 ubiquitin E3 ligase complex for subsequent 26S proteasome-meditated degradation [21,23,24]. This canonical GA signaling pathway is responsible for various physiological responses during plant growth and development.
The secondary growth of roots is particularly important for production of various root crops and for accumulation of useful compounds and nutrients in storage roots [25,26,27]. Studies on root crops such as radish and cassava show that the secondary growth of storage roots is regulated by the activity of cambium stem cells. Secondary growth of plants involves formation of cambium stem cells and differentiation of phloem and xylem tissues, which are mainly regulated by the plant hormones auxin and cytokinin [25,26,27,28,29]. In addition, the role of GA in secondary xylem formation and lignification in storage roots has also been confirmed in several plant species, including poplar, carrot, and cotton [30,31,32,33]. Overproduction of GA promotes elongation and division of xylem and fiber cells in the vascular bundle and increases cambium activity [26,32,34]. However, in carrot and sweet potato, exogenous GA treatment inhibits root growth by affecting cell division and vascular lignin synthesis [35,36]. These results suggest that the physiological response to GA, a growth-promoting hormone, varies with the plant species. Although Korean ginseng is one of the most important medicinal root crops with a 6-year cultivation period, genetic and physiological factors affecting the growth and development of ginseng roots have rarely been investigated.
Owing to recent advances in sequencing technology, the draft genome sequence of P. ginseng has been released by two research groups [37,38]. In addition, we also previously reported the precise transcript sequences of P. ginseng using PacBio single-molecule real-time (SMRT) isoform sequencing (Iso-seq) analysis [39].

The secondary growth of the tap root, as a storage organ, is one of the main factors affecting ginseng yield. To investigate the physiological effects of GA in P. ginseng, active GA3 and paclobutrazol (PCZ), a GA biosynthetic inhibitor, were applied exogenously to the roots of 1-year-old P. ginseng plants. Exogenous application of GA significantly promoted stem growth compared with mock treatment (Figure 1A,B), which is consistent with the role of GA as a growth-promoting hormone [40]. Interestingly, exogenous GA treatment also increased the diameter of the tap root; however, PCZ application reduced both shoot and root growth in P. ginseng (Figure 1A,B). To further analyze the GA-mediated promotion of shoot and root growth, GA- and PCZ-treated P. ginseng samples were applied to histological paraffin-embedded sections with Safranine-Astra blue combination staining. Compared with the control, plants in the GA treatment group showed longer epidermal cells, consistent with their elongated stem phenotype (Figure 1C). Conversely, the stems of plants in the PCZ treatment group showed slightly shorter cells compared with the control (Figure 1C). However, there was no significant difference in the size of the divided cells surrounding the cambium layer of the storage tap root, although the number of divided starch-deposited storage parenchyma cells located between xylem vessels and resin duct cells was greatly increased in GA-treated P. ginseng roots (Figure 1D). Consistently, the number of cambium-derived storage parenchyma and vascular cells in PCZ-treated roots was significantly reduced (Figure 1D). These results indicate that GA facilitates root secondary growth in P. ginseng by promoting storage parenchyma cell development.

The growth-promoting effect of GA on the stem and root growth of P. ginseng suggests that the canonical GA signaling pathways are likely evolutionarily conserved in P. ginseng. Since GA signal transduction initiates with its perception, we searched for GA receptor-encoding genes in the P. ginseng genome by analyzing the two genome sequence drafts of P. ginseng and PacBio Iso-seq data [21,22,23]. A BLAST search of the AtGID1A amino acid sequence led to identification of eight putative GID1 DNA sequences in P. ginseng, designated as PgGID1A–H (Figure 2A). Phylogenetic analysis of PgGID1s and AtGID1s showed that five PgGID1s (A, B, C, E, and F) clustered with AtGID1A and AtGID1C, while the remaining three PgGID1s (D, G, and H) clustered with AtGID1B (Figure 2A). Next, we examined the secondary structure of OsGID1 [41] (Figure 2B) and compared the amino acid sequences of PgGID1s with those of AtGID1s and OsGID1 (Figure 2C). A topology diagram based on the predicted secondary structure of OsGID1 provided the structure information of PgGID1s (Figure 1B). The N-terminal region and two α-helices (α8 and α9; located between the β6 and β7 sheets) of OsGID1 corresponded to the left and right sides of the lid structure, respectively (Figure 2B). It is well characterized that OsGID1, one of the hormone-sensitive lipases (HSLs), contains an evolutionarily conserved HGG sequence and a catalytic triad (S, D, and H), both of which are essential for its enzymatic activity; H in the SDH catalytic triad is replaced by V. In PgGID1s, the V residue is replaced by I, as in AtGID1B and AtGID1C (Figure 2C). Furthermore, PgGID1s showed high sequence similarity with AtGID1s and OsGID1 (Figure 2C). Additionally, important amino acid residues and motifs (Figure 2B) were well-conserved among the PgGIDs, suggesting that PgGID1s function as GA receptors. It is well-known that GID1 proteins act as molecular glue to facilitate the interactions of DELLA repressors with SCFSLY1/GID2 in a GA-dependent manner [41]. To confirm subcellular localization of PgGID1s, we co-expressed the PgGID1-GFP fusions and AtARR2-RFP (as a nuclear marker) in Arabidopsis protoplasts. Similar to the nucleocytoplasmic localization of AtGID1s and OsGID1 [42], all four PgGIDs (A–D) localized to the nucleus and cytoplasm (Figure 2D).

To evaluate the biological roles of PgGID1s in the GA signaling pathway, we performed complementation analysis of the Arabidopsis Atgid1a/c double knockout mutant, which exhibits a GA-deficient semidwarf phenotype [20]. PgGID1A–D were individually overexpressed in the atgid1a/c double mutant under the control of the constitutively active 35S promoter (Figure 3A–C). All complementation lines expressing PgGID1s showed a wild-type shoot phenotype (Figure 3A) and partially enhanced silique length compared with Atgid1a/c plants (Figure 3B). These results indicate that PgGID1s can replace the function of AtGID1s during plant growth and development. Next, we investigated whether exogenous GA3 enhances the interaction of PgGIDs with PgDELLA proteins (Figure 3D). We cloned five DELLA-encoding genes of P. ginseng (named as PgRGA1–5), and ca) (Supplementary Table S2), contributing to the essential role for secondary cell wall biosynthesis. We carried out yeast two-hybrid assays in the presence or absence of exogenous GA3. In the absence of active GA3, rare physical protein interactions between all PgGID1s and PgRGA1, 2 and 3 proteins occurred, but the protein interactions between PgGIDs and PgRGAs (except between PgGID1D and PgRGA1-3) were enhanced in the presence of GA3. However, PgGID1D interacted only with PgRGA4 and PgRGA5 in a GA3-independent manner (Figure 3D). These results reveal interaction specificity between PgGIDs and PgDELLAs. 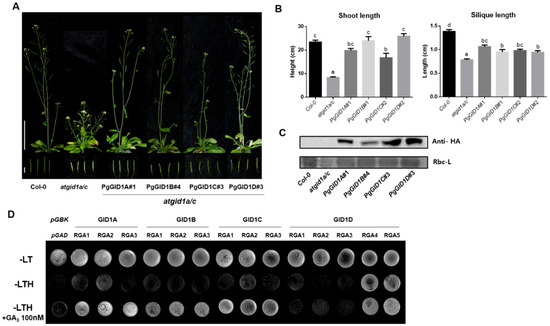 5. Transcriptome Analysis of Root Secondary Growth in Response to GA in P. ginseng

Figure 4. Transcriptome profiling of P. ginseng roots treated with or without GA. (A) Gene ontology (GO) enrichment analysis of differentially expressed genes (DEGs) identified by comparison of GA- and DMSO-treated root samples. GO terms of level 3 (yellow bars) and level 5 (black bars), with EASE score < 0.01, were selected (left panel). The number of up-regulated genes (red) and down-regulated genes (blue) categorized under the enriched GO terms are shown in the right panel. (B) Enrichment plot for the responses to ABA (GO: 0009737) and JA (GO: 0009753) in the transcriptome data of DMSO- and GA-treated root samples. In the enrichment plot, the red dotted line represents the gene subset that made the largest contribution to the enrichment score (ES) (false discovery rate [FDR] < 0.05). The ranking list metric in the plot measures the correlation between a gene and the plant phenotype. In the ranking list, positive values indicate genes up-regulated in DMSO-treated root samples with red color gradient, and negative values indicate genes down-regulated in DMSO-treated root samples.