The society of Japan is aging, and the percentage of predialysis-chronic kidney disease (CKD) patients is greater in older populations; thus, it is not surprising that the number of elderly CKD patients who require renal replacement therapy (RRT) has been increasing. Since as few as 3% of dialysis patients can be maintained on peritoneal dialysis [1] and kidney transplantation is uncommon [2], nearly all end-stage CKD patients undergo hemodialysis (HD) as RRT. In fact, the proportion of HD patients in Japan ≥65 years old has increased to 71%, and that of those ≥75 years old has increased to 43% (Figure 1) [3]. An analysis of the annual dialysis data report for the 2018 JSDT renal data registry [3] shows that the increasing age of HD patients in Japan can be accounted for by both elongation of HD duration due to the sophistication of dialysis techniques, and increasing age at the time of HD initiation. The DOPPS study demonstrated that the mortality rate in Japan is the lowest among the DOPPS-participating countries, and has continued to decline given the increasing age of Japanese HD patients. Along with the aging of the HD patient population, the number of co-morbidities that may impair a satisfactory quality of life (QOL), and thus cause emaciation and sarcopenia, is increasing. Impaired QOL in elderly HD patients changes patients’ condition from independent living to the requirement of physical support or nursing care [4], thus impairing the quality of a potential 100-year life. 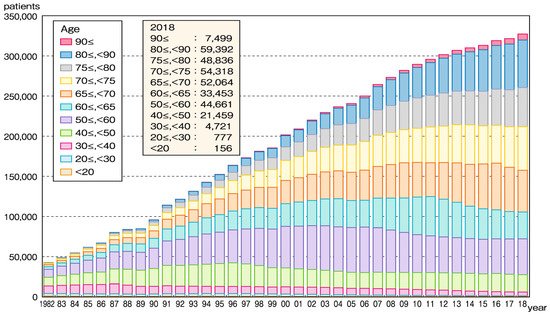 Figure 1. Trends in counts of Japanese hemodialysis patients stratified by age for the period 1982–2018. The proportion of patients aged ≥65 years and ≥75 years has increased up to 71% and 43%, respectively, in Japan. The average age of HD patients in Japan has remarkably increased during the last three decades, from 47 years old in 1983 to 69 years old in 2017 (registry of Japanese Society of Dialysis Therapy).

2. Preferential Occurrence of Malnutrition and Its Mechanism in Pre-Dialysis CKD Patients

Old age is known to be associated with poor nutritional status, while CKD itself is closely associated with malnutrition because of several different mechanisms [5]. First, CKD may be associated with dietary inadequacy in relation to suboptimal energy and protein intake due to poor appetite status, taste perception [6], low diet quality, and/or psychosocial or financial barriers. Furthermore, a reduction in metabolic rate resulting from reduced physical activity and muscle mass can contribute to poor appetite in HD patients [7]. Second, a protein-restricted diet has been recommended for pre-dialysis CKD patients to prevent exacerbation of renal dysfunction, though that might be a risk factor for malnutrition and sarcopenia [8], which is supported by the findings showing the beneficial effects of a high-protein diet or amino acid supplementation on nutritional state, as assessed by improved serum albumin and various nutritional markers [9]. Third, CKD is complicated by a metabolic syndrome termed malnutrition–inflammation complex syndrome (MICS) [10], or protein energy wasting (PEW) syndrome [11], which consist of catabolic inflammatory reactions and cachexia leading to malnutrition. Fourth, it is possible that multiple comorbidities associated with malnutrition and frailty/sarcopenia, such as diabetes mellitus (DM), cardiovascular disease (CVD), cerebrovascular disease, immobility, and insomnia, contribute to malnutrition. Interestingly, a study of common malnutrition in pre-dialysis CKD patients found that more than 50% of nephrologists initiate dialysis for end-stage CKD patients after their nutritional status is impaired [12].

3. Significance of Malnutrition for Various Clinical Outcomes in HD Patients

Along with the common occurrence of malnutrition in end-stage CKD cases, a malnutritional state can continue even when the patient reaches a stable condition on maintenance HD. Although HD initiation allows for a more liberal intake of protein and food so as to improve nutritional state [13][14], dialysis-specific factors still exist that cause malnutrition.

At the time of HD initiation, a patient presenting with malnutrition has a high mortality risk on the basis of low nutrition markers, such as geriatric nutritional risk index (GNRI) [15], subjective global assessment [16], low body mass index (BMI) [17], low serum levels of albumin [15] and cholesterol [16], and low food intake [18].

4. Significance of Sarcopenia in Relation to Harmful Effects of Malnutrition in HD Patients

Sarcopenia was defined in 1988 as an age-related reduction in skeletal muscle mass and function [19], after which the Asia Working Group for Sarcopenia provided a definition for the evaluation of sarcopenia in Asian individuals [20]. Serum albumin, which is reported to be elevated by an increased intake of food, protein, and branched-chain amino acids, also rises with an increase in muscle content. Furthermore, GNRI, a relevant marker for nutrition and mortality, is defined via serum albumin in addition to body weight, which is mainly determined by muscle content. We examined the importance of the creatinine index, another nutritional marker in HD patients without residual renal function, as a predictor of mortality risk [21]. The creatinine index is calculated using the following formula: Cr index = 16.21 ( +1.12 if male) − 0.06 × [age (years] − 0.08 × (single pool Kt/V) + 0.009 × [serum creatinine (μmol/L]. Thus, the creatinine index is a nutritional marker that is mainly determined in HD patients by muscle content, given the lack of apparent residual renal function. We found that lower GNRI and Cr index values were both independently and equally associated with an increased risk of all-cause mortality in a multivariable-adjusted model [21]. Taken together, these findings demonstrate that the mechanism by which malnutrition increases mortality risk in Japanese HD patients can be mostly explained by reduced muscle mass.

5. Preferential Occurrence of Sarcopenia, and the Significance of Muscle Strength Rather Than Muscle Mass in HD Patients

6. DM and Sarcopenia in HD Patients

In addition to aging and malnutrition, sarcopenia is known to preferentially occur in HD patients with osteoporosis and DM [25]. Additionally, the rates for the co-existence of sarcopenia, osteoporosis, and DM are known to be higher in HD patients and increase with aging. Although each disease is known to independently affect physical activity and mortality in HD patients, it is possible that DM and osteoporosis, both independently and together with sarcopenia, might reduce longevity and survival rates in these patients. Furthermore, the interaction between these three diseases is important to mention.

To elucidate the association between DM alone with muscle strength independent of CKD, we measured handgrip strength in female T2DM patients without clinically overt DM complications in our DM outpatient clinic, and compared the results with those of a non-DM normal female control group of the same age [25]. Figure 2 shows the changes in handgrip strength with age in those female subjects. While non-DM female normal controls exhibited a characteristic decline in handgrip strength after menopause because of loss of estrogen, which has a protective effect on muscle [26], handgrip strength was significantly weaker in female DM patients in their 40 s than in their non-DM counterparts, which supports our finding in HD patients that DM is an independent risk factor for the development of sarcopenia in HD patients [23]. 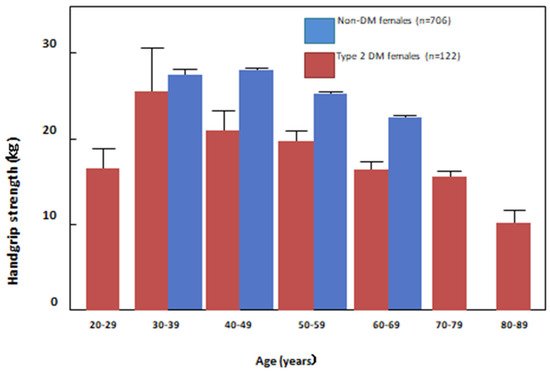 Figure 2. Age-stratified handgrip strength in normal female subjects and type 2 DM patients without overt DM complications. Although handgrip strength started to decrease significantly during the postmenopausal period as compared to normal female subjects, female type 2 diabetes patients exhibited a significant decrease in handgrip strength by their 40 s, supporting the notion that type 2 DM is a risk factor for the early development of muscle strength reduction.
A DM state has been shown to be associated with sarcopenia via several different mechanisms, including malnutrition, insulin/IGF-1 deficiency, and a sustained hyperglycemia condition, while it has been speculated that sarcopenia might exacerbate the DM condition because of reduced muscle tissue, against which insulin treatment protects by stimulating transport plasma glucose into muscle tissue.
Indeed, the plasma glucose area under the curve during the 2 h oral glucose test of DM HD patients, which represents the increase in postprandial glucose (evidenced by a significant correlation with glycoalbumin, a clinically reliable marker for postprandial hyperglycemia [27]), exhibited a tendency towards inverse correlation with BMI, although this was not significant (Figure 3). These data also suggest that the maintenance of BMI, which is particularly affected by lean mass in HD patients, might protect postprandial glucose excursion in such patients.

Figure 3. Correlation between area under curve (AUC) of plasma glucose during 2 h oral glucose tolerance test with BMI (A) and glycoalbumin (B) in hemodialysis patients. Oral glucose (75 g) tolerance test was performed in 23 Japanese hemodialysis patients after an overnight fast. The plasma glucose AUC during the 2 h oral glucose tolerance test exhibited a significant negative correlation with BMI (A) and a positive correlation with glycoalbumin (B).
Furthermore, hyperglycemia is a result of cellular malnutrition, given the incapability of glucose to enter muscle cells, leading to loss of muscle mass and the development of sarcopenia. DM complications, such as CVD, visual dysfunction, and dementia, can restrict physical activity, leading to loss of muscle tissue. Peripheral arterial disease, another complication often observed in DM HD patients, might also cause loss of muscle tissue by limiting the blood flow to the muscle tissue in the lower limbs [28].

7. Osteoporosis and Sarcopenia in HD Patients

We recently reported that pre-dialysis CKD patients with a fracture exhibited a greater creatinine-based eGFR/cystatin C-based eGFR ratio than those without a fracture [29]. Creatinine-based eGFR is known to overestimate true GFR in aged CKD patients, apparently because of the lower levels of serum creatinine resulting from reduced muscle mass, as observed in HD patients, and it has been shown that cystatin C-based eGFR reflects true GFR more effectively than creatinine-based eGFR in aged CKD patients [30]. Additionally, our results indicate that the fracture rate in pre-dialysis CKD patients is greater in those with than without sarcopenia [29]. Due to the high prevalence of sarcopenia in HD patients in Japan [22], it is reasonable to consider the importance of sarcopenia in the development of osteoporosis and osteoporosis-based fragility fractures. Fall trauma and fracture are amongst the main causes of changes in the conditions of elderly HD patients, from independent living to the requirement of physical support or nursing care.

8. Importance of Sarcopenia as a Treatment Target to Elongate Longevity of HD Patients in the Era of 100-Year Life

HD patients with sarcopenia, which is often accompanied with malnutrition, are strongly encouraged to maintain sufficient calorie and protein intakes so as to enjoy a satisfactory quality of life, which includes maintaining the activities of daily living that will help to avoid and or reverse emaciation and sarcopenia. However, efforts to increase food intake in HD patients with sarcopenia/emaciation often are not successful due to persistent anorexia resulting from sarcopenia-associated inflammatory status [31]. The first step to stop this vicious cycle should be physical therapy. It is possible that physical therapy might increase appetite by lifting the patient’s mood in the short term, and increasing the metabolic rate via activated muscle metabolism/mass in the long term. Since the Japanese Ministry of Health, Labour and Welfare recommends a high-calorie and high-protein diet to increase longevity in the elderly population, this food policy should be extended to elderly HD patients, after encouraging them to undertake physical therapy.