Tartary buckwheat is used as an ingredient in flour and tea, as well as in traditional Chinese medicine for its antioxidant effects. Here, we found that an ethanol extract of tartary buckwheat (TBE) potently induced autophagy flux in HeLa cells by suppressing mTORC1 activity, as revealed by dephosphorylation of the mTORC1 substrates Ulk1, S6K, and 4EBP, as well as by the nuclear translocation of transcriptional factor EB. In addition to non-selective bulk autophagy, TBE also induced aggrephagy, which is defined as autophagy against aggregated proteins. Quercetin is a flavonol found at high levels in TBE.

Macroautophagy (hereafter referred to simply as autophagy) is an intracellular degradation process that supports cellular homeostasis [1]. The mechanisms that underlie autophagy were initially characterized in yeast studies, but are now understood in mammals as well [2]. As a result, increasing numbers of studies have demonstrated the vital connection between autophagy and a wide variety of human diseases, such as cancer and neurodegenerative diseases [3]. To address these autophagy-related conditions, a number of attempts by the pharmaceutical industry and academia are underway worldwide to artificially regulate autophagy activity in vivo by the use of exogenous compounds [4]. In particular, traditional Chinese medicine has attracted wide attention as a source of potential autophagy modulators [5]. This therapeutic approach has a different foundation than European medicine, and it is broadly accepted, mainly in East Asia. It is based on a long history of prescription and experience, and therefore while its physiological effects are assured to some degree, the underlying molecular mechanisms are largely undetermined. We recently reported that Shigyakusan, a mixture of compounds used in Kampo (Japanese-style traditional Chinese medicine) and a close relative of Shini-san in traditional Chinese medicine, has a suppressive effect on autophagy [6].
Tartary buckwheat (Fagopyrum tataricum) is a species of herbaceous plant whose grain is used to prepare flour, noodles, and herbal tea, all mainly in Central and East Asia [7]. Compared to common buckwheat (Fagopyrum esculentum), it has a characteristically bitter flavor. In addition to its use in food, the ethanol extract of tartary buckwheat (TBE) is utilized as a component of traditional Chinese medicine [8]. The administration of TBE to mouse brain and liver was shown to reduce antioxidant enzyme levels [8]. It also exerted an antibacterial effect against Propionibacterium and Staphylococci species [9]. We conducted a pilot survey to determine whether any of the ingredients of Maopu buckwheat liquor, a Chinese liquor containing various Chinese herbal medicine extracts, affected autophagy activity, and found that TBE strongly induced autophagy. Therefore, we performed the present study to elucidate the molecular mechanisms of this property of TBE and its effect on hepatocytes.

To investigate how TBE induced autophagy, we focused on the protein kinase mTORC1, which negatively regulates autophagy induction by alternating the phosphorylation level of proteins involved in the autophagy regulation process [10]. Transcriptional factor EB (TFEB) is a mTORC1 kinase substrate and an important regulator of autophagy/lysosome protein biogenesis [11]. Under nutrient-rich conditions, active mTORC1 phosphorylated TFEB and retained TFEB in the cytoplasm, whereas dephosphorylated TFEB under starvation conditions translocated into the nucleus. However, when the cells were treated with TBE, GFP-TFEB was localized in the nucleus even under nutrient-rich conditions (Figure 1A,B). 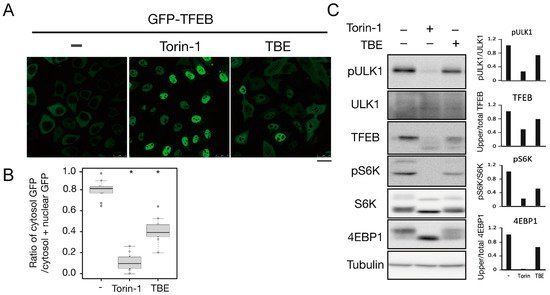 Figure 1. TBE enhances dephosphorylation of mTORC1 substrates. (A) GFP-TFEB-expressing HeLa cells were treated with or without Torin-1 or TBE for 4 h and observed under a confocal microscope. Bar: 25 µm. (B) The graph shows the ratio of GFP intensity in a 7 µm2 of the cytosol to the sum of GFP intensities in certain areas of the cytoplasm and nucleus. Median: line; upper and lower quartiles: boxes; 1.5 interquartile range: whiskers. * denotes p < 0.05 by unpaired two-tailed Student’s t-test. (C) HeLa cells were treated with or without Torin-1 or TBE for 4 h and subjected to Western blotting using anti-phospho-ULK1 (Ser757), anti-ULK, anti-TFEB, anti-phospho-S6K, anti-p70 kinase, anti-4E-BP1, and anti-tubulin antibodies. The graph shows the quantification of each band intensity.
We next examined the phosphorylation levels of mTORC1 substrates by Western blotting. The band size of TFEB was shifted down in response to Torin-1, indicating that TFEB was dephosphorylated (Figure 1C). TFEB was also shifted when the cells were treated with TBE (Figure 1C).
ULK1 protein kinase was another mTORC1 kinase substrate. The serine-757 site of ULK1 was phosphorylated by active mTORC1 to suppress autophagy, while treatment with the mTORC1 inhibitor Torin-1 led to ULK1 dephosphorylation at this serine site [12]. TBE treatment also resulted in dephosphorylation of this site (Figure 1C). The other major mTORC1 substrates, the ribosomal protein S6 kinase (S6K) and the translation initiation factor 4E-binding protein (4E-BP) [13], were also dephosphorylated in the presence of TBE (Figure 1C). Collectively, these results show that TBE suppresses mTORC1 kinase activity.

In addition to bulk autophagy, which degrades nonselective cytosolic components, a wide range of specific targets are also subjected to autophagy; in this case, the process is known as selective autophagy [14]. Among these targets are aggregated proteins which are engulfed by autophagosomes and eventually degraded by a process called aggrephagy, one form of selective autophagy. In a previous study, protein aggregates were artificially induced by halting translation with puromycin treatment [15]. P62/SQSTM-1, an autophagy-related adaptor protein, is localized with protein aggregations and can be utilized as a protein aggregation marker [16]. In this study, p62-positive punctae formed after treatment with puromycin for 4 h, representing protein aggregates (Figure 2). Eighteen hours after puromycin was washed out, most p62-positive punctae disappeared, although these punctae persisted in autophagy-defective HeLa cells [15] [Ikari et al., manuscript in preparation], indicating that their removal was dependent on aggrephagy. Torin-1 treatment accelerated this process and resulted in a reduced number of p62-positive punctae, but the effect was moderate after just a 1-h washout (Figure 2). However, TBE treatment enhanced the clearance of p62 punctae even within 1 hr (Figure 2), indicating that TBE induces aggrephagy. 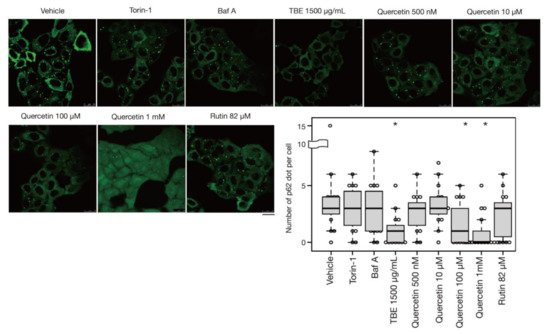 Figure 2. TBE and quercetin enhance the induction of aggrephagy. HeLa cells were treated with puromycin for 4 h, Figure 1. Bafilomycin A1, TBE, quercetin, or rutin at the indicated concentrations for 1 h. p62 was detected by immunostaining. The graph shows the number of p62 dots over 1.4 µm in diameter per HeLa cell. Bar: 25 µm. Median: line; upper and lower quartiles: boxes; 1.5 interquartile range: whiskers. * denotes p < 0.05 by unpaired two-tailed Student’s t-test.

4. Quercetin Is Responsible for the TBE Effect on Autophagy Induction

Rutin is a flavonoid that occurs at much higher concentrations in tartary buckwheat than in common buckwheat. We examined whether rutin could induce autophagy, but it did not do so even at a high concentration (Figure 2). Rutin consists of the flavonol quercetin and the disaccharide rutinose. A previous report showed that TBE includes a highly active rutin-degrading enzym, and, as a result, rutin is promptly degraded into quercetin in aqueous extraction [17][18]. We therefore examined whether quercetin affected autophagy. The TBE batch used in this study comprised 2.8% (w/w) of quercetin according to HPLC analysis (data not shown), which is equivalent to 130 µM in 1500 µg/mL of TBE. We treated HeLa cells to determine how aggrephagy was affected by a series of quercetin concentrations. Aggrephagy was promoted by 100 µM of quercetin, but not by 25 or 50 µM (Figure 2). We further examined the effects of quercetin on autophagy using GFP-LC3-expressing HeLa cells. When quercetin was added, the number of GFP-LC3 punctae was higher compared to vehicle control (Figure 3A). We also examined the effect of quercetin treatment on mTORC1 activity. When HeLa cells expressing GFP-TFEB were treated with quercetin, GFP-TFEB showed nuclear translocation similar to that seen following treatment with Torin-1 or TBE (Figure 3B). 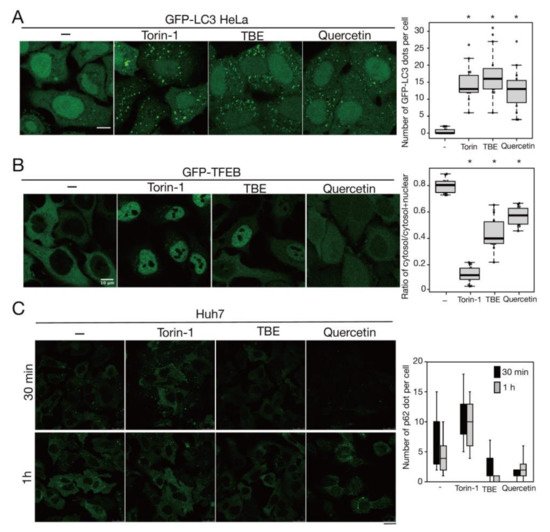 In this study, we showed that TBE treatment induced autophagy by suppressing mTORC1 activity, and that quercetin was the ingredient that exerted this effect. We further revealed that TBE and quercetin promoted not only bulk autophagy, but also aggrephagy against aggregated proteins.
The initial phase of this project investigated the effects on autophagy of five ingredients in Maopu buckwheat liquor, and we eventually succeeded in identifying quercetin as the ingredient with potent aggrephagy-inducing ability. It remains possible that compounds in TBE other than quercetin also contribute to this effect. However, quercetin may be the primary ingredient capable of inducing autophagy on its own. Previous studies have reported that quercetin is associated with autophagy in several contexts. First, quercetin treatment induced autophagy in gastric cancer cells, causing a pronounced pro-apoptotic effect [19]. Subsequently, Klappan et al. reported that quercetin possesses a proteasome inhibitory effect that leads to mTORC1 inhibition [20]. However, in contrast with our findings, their study reported that quercetin treatment induced protein aggregation, mostly inside the nucleus [20]. Induction of autophagy by quercetin has been observed in several tissues and diseases, including diabetic nephropathy [21], oocytes from aged mice [22], intervertebral disc degeneration [23], myelodysplastic bone marrow [24], and human retinal pigment epithelial cells [25], while one study reported that quercetin attenuated autophagy in a rat model of traumatic brain injury [26]. Regardless of these previous studies, here we performed a comprehensive set of autophagy assays that unquestionably proved the effect of quercetin on autophagy for the first time [27]. As suggested by our study and the aforementioned reports, these effects could be mediated by mTORC1 suppression. The underlying molecular mechanism is still to be determined, but a recent report that quercetin directly binds to mTORC1 has interesting implications [28].
Both TBE and quercetin induce bulk autophagy and aggrephagy. TBE and quercetin are less effective at suppressing mTORC1 than Troin-1. Nevertheless, TBE and quercetin induce aggrephagy at an even earlier time (1 hr) than the point at which Torin-1 exerted its limited effect on aggrephagy. Therefore, we speculate that a pathway other than that involving mTORC1 is affected by quercetin in aggrephagy, although the identity of this additional pathway is still to be determined. In the liver, the pathogenesis of alcoholic hepatitis is closely linked to the accumulation of protein aggregates called Mallory–Denk bodies [29], and the clearance of these aggregates could potentially alleviate hepatitis. In addition, protein aggregates in the liver provoke tumorigenesis [30], and aggrephagy is capable of clearing these proteins [31]. Quercetin is linked to alcohol-induced liver injury because it enhances autophagy against mitochondria (mitophagy) [32] and lipid droplets (lipophagy) [33]. Combined with these effects, the ability of TBE to enhance aggrephagy could potentially prevent these diseases. Future research to clarify this possibility is needed, especially using animal models.