The central nervous system (CNS) has an exceptionally high lipid content. The brain contains the highest diversity of lipids than any other organ. Fatty acids (FA) are essential monomeric components that define the structural diversity of lipids and determine their functional properties in the CNS. FAs and their metabolites are critical for brain homeostasis and influence many neural functions, including cell survival, neurogenesis and synaptogenesis. Glial cells are a highly heterogeneous population of cells and predominate the mammalian brain. Astrocytes, oligodendrocytes and microglia are the major types of glial cells in the CNS. Their main function is to sustain a homeostatic environment for neuronal circuits, providing not only structural or trophic support but also controlling neuronal function and plasticity. To do so, glial cells heavily rely on transient and temporal changes in the FA and lipid metabolism.

De novo FA synthesis is a highly conserved process between bacteria and eukaryotes [1]. In mammals, this process is a critical anabolic pathway that takes place in the cytoplasm [2]. The mechanism of FA synthesis consists of a coordinated series of enzymatic reactions that sequentially extend an alkanoic chain by a series of decarboxylative condensation reactions (Figure 1) [3]. Initially, citrate is converted to acetyl-CoA by ATP-citrate lyase (ACLY). The resulting acetyl-CoA is carboxylated to yield malonyl-CoA by acetyl-CoA carboxylase (ACC). Then, Acetyl-CoA and malonyl-CoA are coupled to the acyl-carrier protein domain of the rate-limiting enzyme fatty acid synthase (FASN) [4]. The elongation of the chain occurs by repeating the condensation cycle until a 16-carbon palmitic acid (16:0) is generated. Next, palmitic acid is further elongated and desaturated to generate complex fatty acids. Alternatively, de novo synthesis also occurs in mitochondria but this pathway closely resembles the prokaryotic FA synthesis pathway [5]. However, this pathway has only one known product, lipoic acid, which functions as a cofactor for several important mitochondrial multienzyme complexes [6]. 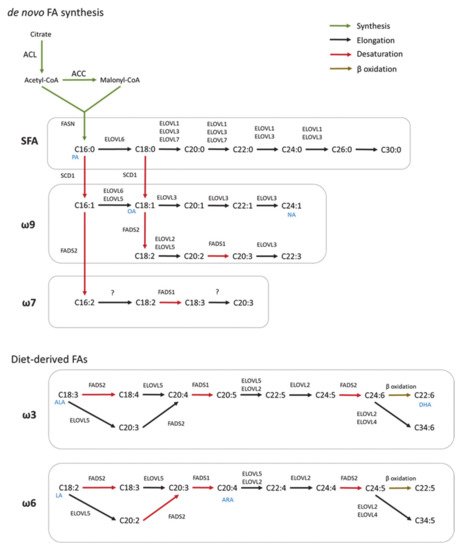 In mammals, FA elongation depends on a set of enzymes termed elongation of very long-chain fatty acid enzymes (ELOVLs) [7]. ELOVLs are located in the endoplasmic reticulum (ER) and catalyze FA elongation via the condensation of a malonyl-CoA to an acyl-CoA molecule to yield 3-ketoacyl-CoA, which is the first rate limiting step in the elongation cycle of FAs [8]. Then, 3-ketoacyl-CoA is reduced and dehydrated to produce trans-2-enoyl-CoA, which is finally reduced to form the elongated acyl-CoA. To date, seven ELOVLs have been identified in mammals (ELOVL1–7) (Figure 1). ELOVL1, 5, 6 and 7 are ubiquitously expressed, while ELOVL2, 3 and 4 are tissue specific [9][10]. In terms of target substrates, ELOVL1, 3 and 6 elongate saturated (SFAs) and monounsaturated fatty acids (MUFAs), whereas ELOVL2, 4 and 5 elongate polyunsaturated fatty acids (PUFAs) [11].

FA desaturation is accomplished by the introduction of a double bond at specific positions within the FA carbon chain, a process catalyzed by Acyl-coenzyme A (CoA) desaturases [12]. Mammalian cells express Δ9, Δ6 and Δ5-desaturases in which the Δ-number specifies the position where the double bond is introduced [13]. Desaturases are divided in two families, stearoyl-coA desaturases (SCDs), and fatty acid desaturases (FADS) (Figure 1) [14]. SCDs transform SFAs into MUFAs by introducing a single double bond at position Δ9 of the FA chain. In mice, SCDs are present in four isoforms (SCD1–4) which present a distinct tissue distribution pattern [15][16][17]. However, humans only have a highly homologous gene of SCD1 that is ubiquitously expressed in all tissues [18]. FADS are enzymes that catalyze the desaturation of PUFAs. Humans express three FADS (FADS 1–3). The desaturation reactions at positions 5 and 6 of the FA chain are catalyzed by desaturases FADS1 and FADS2, respectively. The function of FADS3 has not been described but it is suggested to catalyze Δ13-desaturation [19]. Mammals lack the Δ12 and Δ15-desaturases present in plants and, consequently, they cannot synthesize FA of the ω6 and ω3 series [20]. These so-called essential fatty acids must be provided by the diet and serve as precursors for the synthesis of longer PUFAs, including arachidonic (ARA) and docosahexaenoic acids (DHA) required for many functions such as the regulation of the membrane composition and signaling pathways [14]. In addition, synthesis of DHA and docosapentaenoic acid undergo one cycle of peroxisomal β-oxidation [21]. Both, de novo FAs and diet-derived FA share the same enzymes for their elongation and desaturation.

Astrocytes are the most abundant cell type in the CNS [22]. Astrocytes provide structural, functional and metabolic support for neurons, and they are also involved in neuroplasticity and interneuronal communication [23]. Astrocytes promote synaptic formation and function by producing thrombospondins and tumor necrosis factor α (TNFα), as well as synaptic elimination by releasing transforming growth factor-β (TGFβ). Additionally, astrocytes contribute to neuronal information processing by decoding GABAergic synaptic activity via the release of glutamate or ATP/adenosine [24].

Ample evidence indicates that FA metabolism drives the function of astrocytes in health and disease, and vice versa, astrocytes control lipid homeostasis in the CNS (Figure 2). For example, Tabernero et al. demonstrated that astrocytic FA acid synthesis is essential for neuronal differentiation during development [25]. Specifically, they reported that a developmental increase in albumin triggers the expression of sterol regulatory-element binding proteins 1 (SREBP-1) and SCD in astrocytes, resulting in the accumulation of oleic acid, a MUFA. Astrocytic oleic acid is horizontal transferred to PC and PE in neurons, enhancing neuronal differentiation and used by oligodendrocytes to synthesize sphingomyelin, stimulating myelination [25]. On that same note, astrocytic oleic acid promotes neuron migration and synaptogenesis by inducing the expression of DCX and GAP-43, respectively [26]. 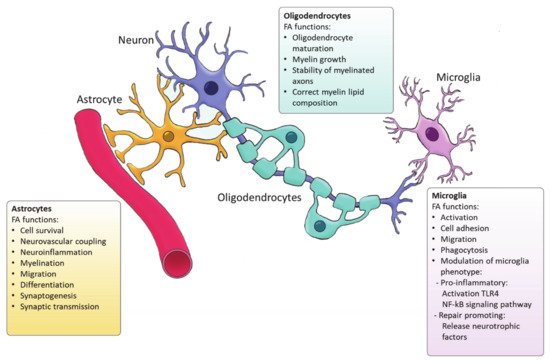 Astrocytes are the main source of DHA and ARA in the CNS [27] that are derived from the essential FA. In vitro and in vivo studies indicate that DHA is involved in neuronal cell growth and differentiation [28]. Although most of the DHA in the CNS is dietary derived, synthesis of DHA from α-linolenic acid by astrocytes as a response to various stimuli plays an important role in neuroinflammation and cell survival [27]. DHA attenuates microglial-induced inflammation by inhibiting the NFκB and MAPK pathway [29], while DHA deficiency increases the expression of pro-inflammatory cytokines such as IL-6, IL-1β or TNF-α [30]. DHA is crucial for the differentiation of astrocytes and inhibits ER stress [31][32]. On the other hand, ARA acts as a messenger controlling the electrical and biochemical behavior of neurons and glial cells. ARA mediates synaptic transmission via acting on most voltage-gated and ligand-gated ion channels [33]. In addition, astrocytes direct neurovascular coupling by synthesizing vasodilatory ARA derivatives [34]. Besides DHA and ARA, other FAs such palmitic acid and stearic acid are generated by astrocytes upon inflammatory stimulation [27]. Interestingly, astrocytic loss of cholesterol synthesis was found to impact whole-body metabolism via sterol regulatory element-binding protein 2 (SREBP2) modulation [35]. SREBP2 is the major transcription factor regulating cholesterol synthetic genes [36]. Astrocyte-specific SREBP2 knock out mice showed altered fat composition and metabolism. All in all, these findings demonstrate that astrocyte-derived FAs are essential for the maintenance and function or the CNS and may even impact systemic metabolism. Nevertheless, further characterization of the FA generated by astrocytes, their bioactivity as well as their relevance in regulating brain function is required.

In the CNS, oligodendrocytes are specialized glial cells responsible for producing myelin sheaths [37][38]. The myelin sheath is characterized by a high percentage of lipids (70–85%) [39]. Apart from cholesterol, all the lipids that form myelin use FAs as their fundamental structure blocks. Therefore oligodendrocytes heavily rely on FA synthesis for membrane production during myelination [40]. Among the FAs present in myelin lipids, about 80% have a chain length of 18 carbon atoms or less and 6% are PUFAs [41]. A recent study has demonstrated that de novo FA synthesis is critical for accurate CNS myelination. This includes radial myelin growth, stability of myelinated axons and correct myelin lipid composition (Figure 2) [42]. Even though FASN is not indispensable for the proliferation and differentiation of oligodendrocytes, FASN deficiency was proven to affect correct maturation of oligodendrocytes and myelination [42]. Moreover, myelin contains high levels of saturated very long chain fatty acids (VLCFA). VLCFAs formation is dependent on ELOVLs activity. Saturated VLCFA are essential for providing a thick permeability barrier for ions to insulate axons [43]. In the CNS, ELOVL4 expression was mainly detected in neurons, although a small group of ELOVL4 positive cells has been observed in the brain white matter, suggesting potential expression by oligodendrocytes [44]. This indicates that ELOVL4 could play a role in the production of VLCFA that form the myelin sheath. In addition, PC is an abundant phospholipid in myelin and its synthesis in oligodendrocytes depends on de novo synthesis through choline uptake [45]. Altogether, current evidence points to a crucial role for FA synthesis in the differentiation of oligodendrocytes and subsequent myelination However future research needs to elucidate the underlying mechanisms.

Microglia are the resident immune cells of the CNS and comprise ∼10–20% of all glial cells [46]. Unlike astrocytes and oligodendrocytes, which are derived from a common lineage of neural progenitor cells, microglia are originated from yolk sac primitive macrophage progenitors that invade the brain at the very early stages of embryonic development. Nowadays, microglia are considered a versatile group of cells [47][48]. Microglia provide the first line of innate immunity of the CNS but its functions go beyond scavenging of debris and infectious agents [47]. Microglia mediate synaptic pruning [49] and regulate neurogenesis and repair [50][51]. Microglia are rich in phosphatidylglycerols and sphingomyelins, containing high levels of specific sphingomyelin which are nearly absent in other glia cells. During the last decade, several studies have demonstrated the importance of FAs in directing microglia function (Figure 2) [52]. Microglia can adopt distinctive phenotypes in response to different stimuli with the classically activated inflammatory state and the alternatively activated, inflammation resolving state as the extremes [53]. The inflammatory phenotype is characterized by the production of pro-inflammatory cytokines and neurotoxic components whereas the alternatively activated phenotype is characterized by the release anti-inflammatory and neurotrophic factors, granting them a repair promoting phenotype [54][55][56]. Yet, the phenotypes found in vivo significantly differ from these two extremes since they display a spatiotemporal spectrum of phenotypes [54][57]. Long chain SFAs, for instance palmitic and stearic acids, contribute to a pro-inflammatory phenotype by activating Toll-like receptor 4 (TLR4) and NF-kB signaling pathways [58][59][60][61]. In contrast, n-3 PUFAs stimulate an anti-inflammatory phenotype [62]. MUFAs such as oleic acid are described to promote anti-inflammatory processes via activation of the transcription factor peroxisome proliferator-activated receptor [52]. However, our recent study shows that MUFAs generated by SCD1 can shift microglia and macrophages into an inflammatory phenotype [63]. Although FAs and their derivatives are crucial for defining microglial function, only few studies describe the involvement of de novo FA synthesis in directing microglia activity. Despite the lack of studies in microglia, there are extensive studies on FA metabolism in macrophages. Microglia and macrophages share many features and during neuroinflammatory responses macrophages infiltrate the CNS where they, alongside microglia, execute innate effector mechanisms [64]. Therefore, it can be expected that there are parallels in the regulation of the function of both phagocyte types by FA metabolism. In macrophages, FA synthesis is indispensable for membrane remodeling and the synthesis of inflammatory factors [65]. Moreover, FASN has shown to be required for inflammatory activation of macrophages. Lack of FASN not only disrupts cell membrane composition by impairing the retention of plasma membrane cholesterol but also alters Rho GTPase trafficking, a process essential for cell adhesion, migration and activation [66]. Talamonti et al. demonstrated that ELOVL2 deficiency decreases DHA levels in macrophages, affecting their plasticity and promoting a hyperactive inflammatory phenotype [67]. In addition, microglia can synthesize neuroprotectin PD1 (NPD1) from DHA, a specialized pro-resolving lipid mediator (SPM) [68]. SPMs are a family of bioactive metabolites generated in response to inflammation by enzymatic of PUFAs [69]. NPD1 is known to promote phagocytosis and resolve inflammation [70]. Taken together, while SFA synthesis is suggested to favor inflammatory activation of microglia, PUFAs biosynthesis promotes an anti-inflammatory phenotype, and MUFA synthesis seems to have a dual influence on the microglia phenotype which probably depends on the disease context.