Oxidative stress biomarkers can be used to detect oxidative damages occurring concomitantly in many cellular structures, which may cause a deterioration of function, including apoptosis and necrosis. There is an intimate relationship between oxidative stress, inflammation, and functional impairment, resulting in various diseases affecting the entire human body.

Reactive oxygen species are compounds that are difficult to measure when assessing oxidative stress, primarily due to the very short half-life, so they hardly play the role of biomarkers. However, if ROS combines with a particular biological molecule, it leaves a unique chemical “fingerprint”. Biomarkers obtained that way can be used to evaluate oxidative damage or the effects of antioxidants, including therapeutic agents. The core criterion for the biomarker is its role in the prediction of the later development of disease. Moreover, important technical criteria of a biomarker are it should detect a major part of total ongoing oxidative damage in vivo, should provide coherent laboratory assays, results should not vary under the same conditions, should be stable during storage, must employ chemically robust measurement technology, and must not be confounded by diet [1]. There is no ideal biomarker, yet many provide sufficient accuracy. ROS, as highly reactive substances, interact with the environment in vivo, involving and stimulating various endogenous mechanisms as well as react with numerous molecules, leaving a mentioned fingerprint, which becomes the point of interest in specific evaluations. ROS, reactions, and essential antioxidants were presented in Figure 1. 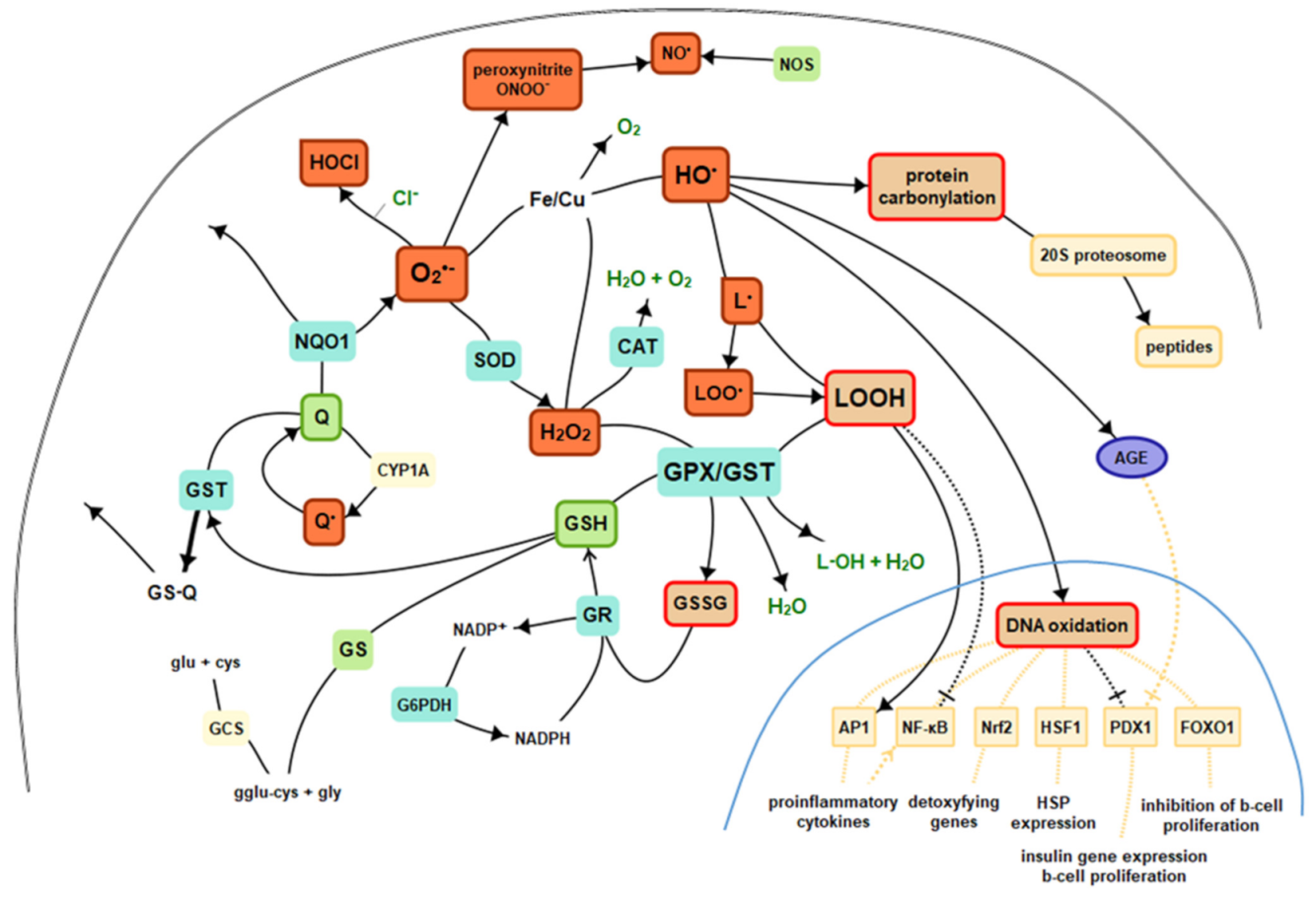 ATP cell production is inherently connected with oxidation, reduction, and ROS generation. External factors involve microbial infections, xenobiotics, diet toxins, radiation, environmental pollution, and others. Living organisms developed specific defense systems against the deleterious action of free radicals. The most important mechanisms are intracellular; however, they act with both extracellular and dietary exogenous antioxidants. Endogenous antioxidants are divided into two groups: protein (with enzymatic activity) and non-protein. Protein ones are the first line of defense, with three the most important: CAT, SOD, and GPx. PubMed search formula for general interest was determined by: {(“biomarker”[Title/Abstract]) AND (oxidative stress)}. Research interest in the field of transplantation, as a Medical Subject Headings, was determined by search formula: {(“biomarker” [Title/Abstract]) AND (transplantation)} (Table 1).
Table 1. Endogenous antioxidants—description and research interest.

Lipids can be oxidized, chlorinated, and nitrated by a range of RS, excluding H2O2, NO•, or O2•−, which are unreactive with lipids. Lipid peroxidation is a complex process, and a wide range of products is formed in variable amounts.
It is the most widely known biological free radical chain (FRC) reaction. The oxidation of unsaturated fatty acids or other lipids results in products, which are peroxides of these compounds. Note that ROS does not initiate peroxidation. Their presence only intensifies the process. Peroxidation reaction, like every FRC, can be divided into three stages:
1. Initiation: Creation of fatty acid radical. ROS which initiates this reaction in living cells are hydroxyl (HO·), peroxy (LOO·), alkoxy (LO·), and alkyl (L·), as well as O3, SO2, and NO2. The separation of hydrogen leads to the formation of an alkyl radical. LH →L• + H2O.
2. Prolongation: Unstable fatty acid radicals easily react with molecular oxygen (O2), forming peroxides, which are also unstable and react with more fatty acid molecules, creating more radicals. The reaction runs in a cycle: L• + O2→LOO• LOO• + LH →LOOH + L•.
3. Termination: Growing number of free radicals increases the probability of collision between them, which ends the process: L• + L• →L–L, LOO• + LOO• →L=O + LOH + O2, LOO• + L• →L=O + LOH. Termination reaction results in products such as dimers of fatty acids, hydroxy acids, and oxoacids.
In Table 2, we summarized biomarkers of lipid peroxidation (BLP) with histograms of research interest. General interest was determined by search formula: {(“biomarker”[Title/Abstract]) AND (oxidative stress)}. Research interest in the field of transplantation, as a Medical Subject Headings, was determined by search formula: {(“biomarker”[Title/Abstract]) AND (transplantation)}. In the last decade, there was a significant growing interest in MDA, with proportional interest in transplantation. However much less expressed, two other “popular” were TBARS and 4-HNE with similar reflection in transplantation. Surprisingly there was a little interest in isoprostanes in transplantation.
Table 2. Biomarkers of lipid peroxidation—description and research interest.

Oxidative DNA damage, mostly due to the hydroxyl radical, generates a huge range of base and sugar modification products [3]. They can be measured by HPLC, gas chromatography–mass spectrometry (GC–MS), liquid chromatography–mass spectrometry (LC–MS), and antibody-based techniques, but none of these have been established as a gold standard [1]. It is estimated that each cell under normal conditions is the target of several thousand attacks on its DNA every day. Free radicals attacking DNA purines, pyrimidines, and deoxyribose create initial products, which undergo further transformations. Damage to DNA by free radicals occurs much less frequently than oxygen damage to proteins and lipids. However, the consequences are more serious due to mutagenic or immunogenic changes. One of the major products of DNA oxidation is 8-hydroxy-2′-deoxyguanosine (8-OHdG) and 8-oxoguanine (8-oxo-Gua) [4].
Biomarkers of nucleic acids peroxidation were presented in Table 4.
Table 4. Biomarkers of nucleic acids peroxidation—description and research interest.

Oxidative stress is a complex phenomenon resulting from the imbalance of cell homeostasis, leading to oxidative damage. It plays a vital role in the pathogenesis of many diseases. Oxidative stress is directly caused by reactive species, mainly ROS. Some of them contain unpaired electrons—free radicals, and others do not, but all of them are very reactive and cause the peroxidation of various molecules. Damage to so many cellular structures can result in the deterioration of function, including apoptosis and necrosis. Oxidative damage leaves a mark, which can be detectible by specific methodology regarding affected molecules. Those substances become the biomarkers of oxidative stress due to their ability to represent the intensity of biochemical changes accurately. The group of biomarkers, in general, comprises internal compounds related to cell physiology as well as end products of peroxidation reactions. Maintaining the cell homeostasis and redox state is a matter of competing chemical reactions and a very complex cellular and nuclear signaling mechanism. The cell can react to the environment and redistribute the energy and resources to overcome certain adverse events as oxidative stress. Oxidative damage, stress, and ROS are still intensively exploited research subjects, especially kidney disease and renal transplantation. However, the modern approach regards mainly signaling pathways and cell internal regulation; therefore, further research is necessary to translate the biochemical correlations into clinical practice and organ protection. With time, adequate interventions and solutions at the cellular level will lead to outcome improvement after organ transplantation.