Prostate cancer (PCa) is the leading cause of cancer-associated mortality in men, and new biomarkers are still needed.

Prostate cancer (PCa) is the leading cause of cancer-associated mortality in men worldwide [1]. The incidence of PCa in the global population may reflect increased life expectancy, improvements in the health information system, and screening practices using the prostate-specific antigen (PSA) test [2]. Despite advances in the detection of PCa, the main challenge is the difficulty in the early distinguishing of aggressive tumors from indolent ones in patients with a low-grade Gleason score [3]. Promising diagnostic and patient risk stratification approaches to prostate tumor cells have emerged, such as liquid biopsies and exosomes [4][5]. However, new biomarkers are still needed to improve both earlier diagnosis of PCa and patient stratification risk.
The syndecan (SDC) family consists of four transmembrane type I proteoglycans, syndecan-1, -2, -3, and -4 (SDC1–4), which are encoded by four different genes [6][7]. SDCs are differentially expressed in various tissues. SDC1 is found predominantly on the basolateral surface of epithelial cells [8][9]. SDC2 is mainly present in cells of mesenchymal origin, fibroblasts, and endothelial cells. SDC3 is expressed primarily by neuronal tissue and cartilage [10], and SDC4 is found in most tissues but has a relatively low abundance [11][12][13]. SDCs have been associated with cellular signaling, cell adhesion, migration, and exosome release [6][14][15][16].
Syndecans have a six-domain organization. The extracellular amino terminal is modified with glycosaminoglycan chains. All four family members have heparan sulfate changes. SDC1 and SDC3 have additional chondroitin sulfate chains. Proximal to the plasma membrane is a protease-sensitive cleavage site responsible for the shedding of the amino terminal glycosaminoglycan-bearing domain [16][17]. Following the transmembrane domain are three cytosolic carboxy-terminal domains. The highly conserved C1 and C2 domains are intercalated by a variable region. Multiple interactions with both the extracellular matrix and soluble cytokines and chemokines are mediated by the extracellular domain. The transmembrane domain is involved in homodimerization. The cytosolic conserved C1 domain is involved in interacting with the actin filaments via binding to ezrin, radixin, and moesin proteins. In its turn, the C2 domain interacts with synectin, syntenin, and calcium-calmodulin-associated serine/threonine kinase [16][18][19]. Readers are referred to references [19][20] for detailed reviews on syndecans.
The syndecans play an important role in the progression and prognosis of many types of cancer [21][22][23]. SDC1 is the best-characterized member of the SDC family and is expressed in all types of epithelial cells [18][24][25]. Loss of SDC1 is associated with tumor progression and poor prognosis in a variety of cancers [26][27][28]. However, observations described by Palaiologou et al. (2014) showed contradictory results in prostate, breast, ovarian, liver, and pancreatic cancer because SDC1 immunoexpression may change depending on tumor stage [29]. Additionally, syntenin-1 (syndecan binding protein, SDCBP or MDA9), which is important for syndecan signaling, has also been involved in cancer progression. SDCBP shows increasing expression in tumor progression from localized to metastatic lesions [30][31]. As mentioned above, SDCBP binds to the conserved syndecan C2 via its PDZ domains [31]. There is no information on the affinity of SDCBP to the different syndecans.

Reads per kilobase of transcript per million mapped reads (RPKM) for each lobe were grouped in a heatmap by condition and stage of progression to facilitate data visualization. Gene expression analysis from RNA sequencing data of two GEMM of PCa showed several essential changes in Sdc1–4 in prostate tumors at different stages of tumor progression. The level of Sdcbp expression did not differ significantly between stages of progression (Figure 1). 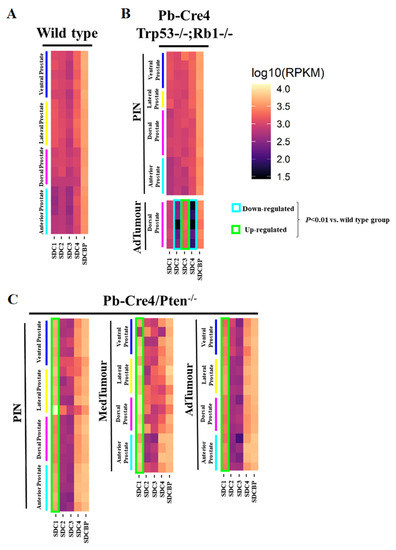 Immunohistochemistry for SDC1-4 and its cytoplasmic anchoring protein, SDCBP, were performed on samples from different tumors. The non-tumoral prostatic tissue showed slight epithelial staining and intense staining around smooth muscle cells (Figure 2A). In the Pten mouse, strong immunostaining of SDC1 in the glandular epithelium in the PIN stage (Figure 2B) and in advanced undifferentiated tumors (Figure 2C) was observed. In the p53/Rb mouse, SDC1 was not observed in prostate stromal immunostaining in the PIN stage (Figure 3A) or advanced tumor stage (Figure 3B). 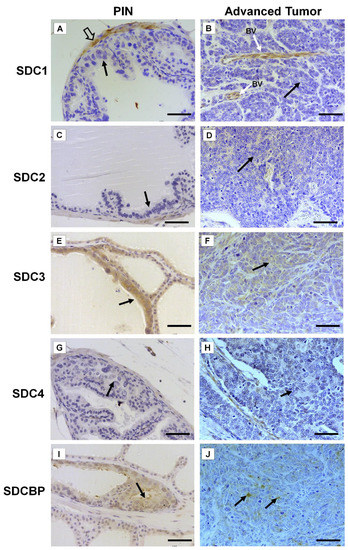