Brillouin spectroscopy has recently gained considerable interest within the biomedical field as an innovative tool to study mechanical properties in biology. The Brillouin effect is based on the inelastic scattering of photons caused by their interaction with thermodynamically driven acoustic modes or phonons and it is highly dependent on the material’s elasticity. Therefore, Brillouin is a contactless, label-free optic approach to elastic and viscoelastic analysis that has enabled unprecedented analysis of ex vivo and in vivo mechanical behavior of several tissues with a micrometric resolution, paving the way to a promising future in clinical diagnosis.

As the role of mechanical properties of cells and tissues is gaining high relevance in the study of a wide range of biological processes, Brillouin imaging has emerged as a promising tool for the characterization of biological samples in terms of their viscoelastic behavior. Traditional techniques for the characterization of biomaterials such as magnetic bead twisting, deformation microscopy, micro-rheology, or atomic force microscopy (AFM) either require contact, are destructive, or do not provide sufficient resolution. Conventional optical coherence elastography, which is a clinical tool that measures tissue biomechanics, is very sensitive to environmental vibrations [1]. On the contrary, Brillouin imaging presents a contactless, label-free, non-destructive modality for probing biological samples in the GHz/micron scale and with great potential in clinical diagnosis.
The Brillouin light scattering (BS) effect was predicted by Léon Brillouin [2][3] and Leonid I. Mandelstam [4][5][6] independently in 1922 and 1926, respectively. However, there is controversy due to the possibility that L. I. Mandelstam had already presented this effect in 1918 [7]. L. I. Mandelstam joined Eugenii Gross to detect the BS experimentally, becoming the first person to observe the Brillouin effect and offer empirical confirmation [8].
The laser’s invention in the 1960s brought a light source powerful enough to reduce acquisition times and increase the resolution, resulting in hundreds of experimental works in the area of condensed matter and becoming a consolidated tool [8][9]. Following the theoretical model presented by L. Brillouin and L. I. Mandelstam, Brillouin–Mandelstam scattering (for the sake of simplicity, it will be only denoted as Brillouin scattering (BS)) is based on the light’s interaction with collective fluctuations of density in the physical medium, provoking a change in the frequency of the scattered light; this effect is explained by a sort of Doppler effect in addition to the Bragg condition to obtain constructive interference.
The first examples of BS measurements on biological tissues were described in the late 1970s and early 1980s that demonstrated the power of this system as a research tool of high resolution and sensitivity [10][11]. Following the development of the virtually imaged phased array (VIPA) spectrometers in 1996 and the introduction of Brillouin imaging in 2005, the topic has flourished into a prolific and fast-moving research field [12][13][14]. During the last decade, a great variety of applications of BS to biology and biomedicine has been reported. BS has been tested as a screening and diagnostic tool and a monitoring resource for a wide range of biological samples at cellular and tissue resolution [15]. This work aims to offer an overview of the development of BS-based techniques in biology, offering a comprehensive summary of the currently available literature and state-of-the-art instrumentation, and explores possible future outlooks (Figure 1A,B). 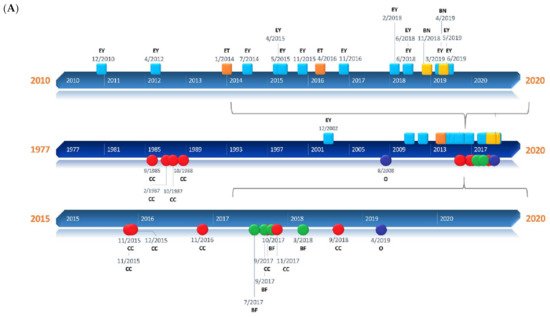 Scattering of light results from the interaction of the electromagnetic field with the constituents of the physical medium. That is the reason why a laser beam can be seen in directions other than the propagation direction. The scattered light can be more or less intense depending on the density of the physical medium and the particle size. The scattered light is composed of different components: one component corresponds to the original frequency (Rayleigh) and others result from intense frequency changes (Raman) or very subtle ones (Brillouin). Apart from the energy change in the scattered light, another relevant difference between Raman and Brillouin scattering includes the physical origin of the effect. In a simplified manner, the intramolecular vibrations are relevant in Raman scattering and the low energy collective vibrations are relevant for Brillouin scattering. The magnitude of the Brillouin-scattered light is about 103 times smaller than the Raman component and its frequency changes only about 10−6–10−5 times with respect to the incident laser light; therefore, it is very challenging to assess.
The classical explanation of the Brillouin effect relies on the interaction of the electric field of the light with thermal fluctuations of the dielectric constant of the physical medium as first described in 1880 by the Lorentz–Lorenz equation. A historical review of this formula is presented by H. Kragh [16]:

where n2 = ε; n is the refractive index and ε is the dielectric constant, r is the specific refractivity, and ρ the mass density.
However, a new vision of the Brillouin–Mandelsatm effect arises with the introduction of quantum mechanical approaches. Light is constituted by photons that behave as if they suffer an inelastic collision when traversing a physical medium (Figure 2A). The counterpart of this collision is the collective vibrations of the medium. These vibrations can be expressed in eigenmodes and can thus be treated as quasiparticles (phonons). In an inelastic collision, energy and momentum must be conserved, resulting in the following relationships: 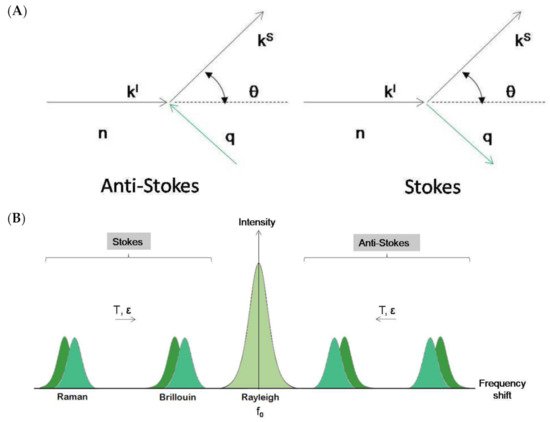 Figure 2. (A). Schematic representation of the Brillouin–Mandelstam effect as a collision between photon (kl) and phonon (q). n is the refractive index of the physical medium and θ is the scattering angle. (B). Schematic representation of Brillouin and Raman spectra. In both experimental techniques, a small amount of light undergoes inelastic scatter, gaining or losing energy and giving rise to a couple of symmetric, frequency-shifted peaks in the spectrum. The remaining elastically scattered light (Rayleigh scatter) appears as a broad central peak with the same frequency as the incident light (f0). In Brillouin and Raman spectroscopies, peak frequency position varies with temperature (T) and strain (ε). In Raman spectroscopy, the intensity ratio between Stokes and anti-Stokes peaks varies also with T.
This picture, which may be mathematically but not conceptually simple (Figure 2A), is well established in solid state physics and is based on a crystalline lattice. In systems without crystalline lattice, as is the case of liquids or glasses, the concept of hydrodynamic modes has been successfully introduced [17][18]. A typical Brillouin scattering spectrum is shown in Figure 2B.
The stimulated Brillouin spectroscopy (SBS) is a conceptually different method that has been recovered and is being considered for biomedical research. This method has shown its potential in liquids and some polymers [19], and is based on the interference of two incident laser beams traversing the sample in different directions but crossing in a defined sample region. A density diffraction grid is stimulated (mainly by electrostriction) and can propagate in the physical medium. Its propagation velocity corresponds to an acoustic wave’s propagation velocity and is detected by one of the lasers. SBS imaging enables measurements with fast acquisition times free from elastic scattering background; therefore, it has been presented as a compelling alternative to conventional BS [20]. However, as SBS is based on the simultaneous application of two lasers, internal scattering may entail a critical hindering in its applicability to non-transparent samples if an initial optical clearing step is not performed. Nevertheless, its Raman homologous SRS has been successfully applied to non-cleared 1 mm thick mouse brain sections with a cellular resolution [21].
There is a growing tendency to combine Brillouin with Raman spectroscopy; therefore, a brief insight on the physical basis of the Raman effect should be provided to understand its contribution to some of the Brillouin studies that will be presented in this review. Both Brillouin and Raman scattering are based on the principle of inelastic scattering of light by phonons that are acoustic in the case of Brillouin and optical in the case of Raman. While the probing of acoustic phonons by BS provides information about the speed of propagation of lattice vibrations, which relates to the mechanical properties and density of the material, the probing of optical phonons by Raman yields information concerning the intrinsic vibrations of molecules, indicating the types of bonds that exist between them and allowing for the molecular characterization of samples. More in depth, Raman scattering is caused by intermediate electronic states that arise due to quantum vibrations specific for different molecular bond types, leading to asymmetric electronic transitions that vary in their final resting state. Raman is not a type of fluorescence emission that is characterized by energy loss in the excited electronic state but for which the resting state corresponds to the pre-excitation one [22]. Contrarily, in Raman, the electrons do not suffer energy loss in the excited state but relax into a different resting-state depending on the corresponding bond’s vibrational energy, inducing a Raman frequency shift proportional to such a vibrational state [22].

where f90A and f180 correspond to the Brillouin frequency shift of the experiment for the 90A and backscattering geometries, respectively. 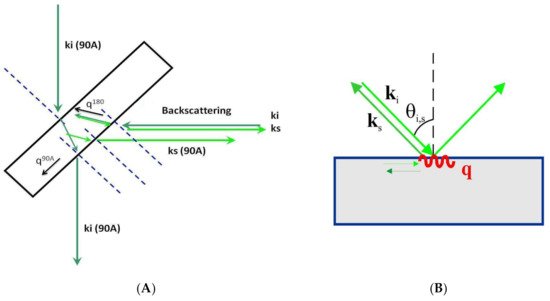 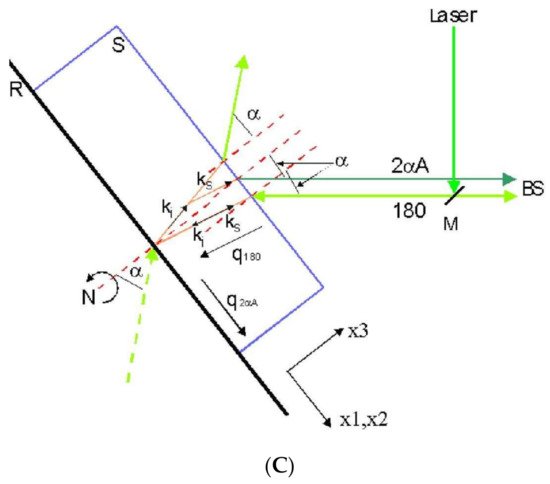