Acetylation of histones and non-histone proteins modulates gene expression and signaling in cells. Changes in the secondary structure of proteins by acetylation leads to a change in their enzymatic activity, subcellular localization and protein-protein interactions [1].

The study of non-histone protein acetylation/deacetylation began after the success of the clinical use of histone deacetylase inhibitors (HDACs) in the treatment of various forms of cancer and was driven by the search for the causes of cytotoxicity of nonselective HDAC inhibitors (HDACi) [2]. Non-histone substrates of HDAC and acetyltransferases (HAT) have been identified, which are tumor suppressors, signaling mediators, steroid receptors and transcription factors [3][4]. The number of identified proteins in which activity is regulated by acetylation/deacetylation to date is certainly lower than the actual amount represented by acetylome in vivo.

One of the main regulators of many target genes is the transcription factor c-Myc. It activates (or sometimes suppresses) 10–15% of all genes involved in the regulation of energy metabolism, protein synthesis, oncogenesis, the cell cycle, and apoptosis. It functions at both the transcriptional and epigenetic level. It can potentiate apoptosis. c-Myc is an oncogene in many human tumors [5]. c-Myc regulation can be involved in several signaling pathways, such as JAK/STAT, Wnt/β-catenin, Notch, and the Ras/PI3K/AKT/GSK-3 signaling pathways, that increase c-Myc levels [6].

Its overexpression was also noted after transient global or focal cerebral ischemia in rodents, where c-Myc promoted neuronal death [7]. An increase in the level of c-Myc was observed in the penumbra on the first day after PTS [8].

The stability of c-Myc in different types of cancer cells is associated with its acetylation at lysine 323 by PCAF acetyltransferase ( Figure 1 ) [9]. In lymphoma cells, SIRT1 interacted with the C-terminus of c-Myc and deacetylated it both in vitro and in vivo [10]. However, inhibitors of HDAC, but not sirtuins, increased the acetylation of c-Myc at lysine 323 and inhibited tumorigenesis [11], which promoted the association of c-Myc with Max, a partner required for c-Myc activation. HDAC inhibitors downregulated c-Myc by blocking GSK-3 phosphorylation and exhibited synergistic cytotoxic and c-Myc-suppressive effects ( Figure 2 ) [12]. HDAC3 also deacetylated c-Myc at lysine 323 in cholangiocarcinoma cells, which protected the protein from ubiquitin-dependent proteolysis [13]. Thus, it can be assumed that at least one of the HDACs in brain cells is c-Myc deacetylase. c-Myc stimulates the expression of p53 and E2F1 [14]. 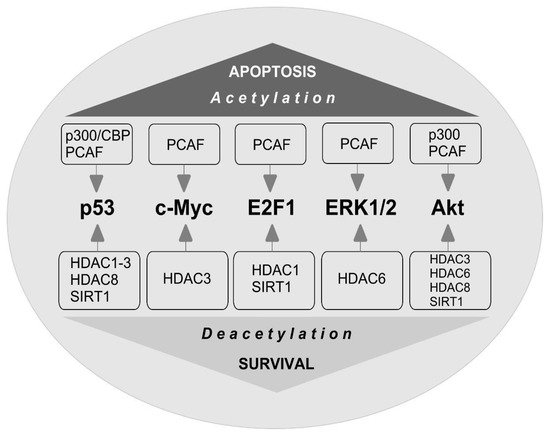 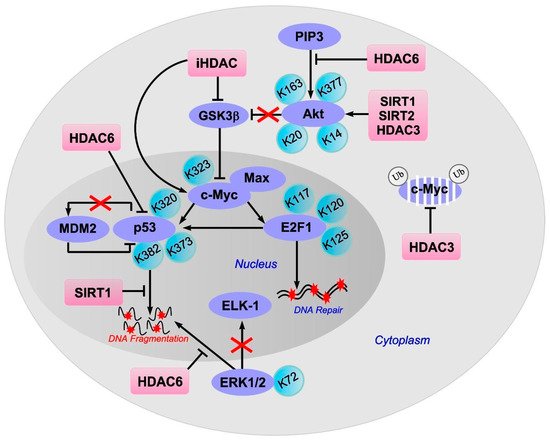 Figure 2. Effect of acetylation/deacetylation on proteins involved in the regulation of apoptosis: c-Myc, p53, E2F1, ERK1/2 and Akt. Inhibitors (iHDAC), but not sirtuins, increase the acetylation of c-Myc at lysine 323 and inhibit tumorigenesis which promotes the association of c-Myc with Max, a partner required for c-Myc activation. HDAC inhibitors downregulated c-Myc by blocking GSK-3 phosphorylation. HDAC3 deacetylates c-Myc at lysine 323, protecting the protein from ubiquitin-dependent proteolysis. c-Myc stimulates the expression of p53 and E2F1. Inhibition of the E2F1/p53 pathway prevents neuronal apoptosis. E2F1 acetylated at three lysines (K117, 120, and 125) promotes DNA double-strand break repair. The C-terminal lysines (K320, K373, K382) in p53 acetylation increases p53 activity in response to DNA damage. Upon DNA damage, the acetylation of p53 disrupts the interaction between Mdm2 and p53 and causes the activation of proapoptotic genes. Sirtuin 1 (SIRT1) can reduce neuronal apoptosis and cerebral edema by deacetylating p53. The HDAC6 inhibition reduces the amount of nuclear HDAC6 and therefore the interaction between HDAC6 and p53, which leads to an increase in p53 acetylation. ERK1/2 acetylation at lysine 72 (K72) reduces the enzyme activity towards transcription factor ELK1, a substrate of ERK1; ERK1/2 deacetylation by HDAC6 promotes ERK1 activation and prevents cell apoptosis. Protein kinase Bα (Akt) is acetylated at lysines 163 and 377 (K163, K377). The inhibition of HDAC6 leads to a decrease in the ability of Akt to bind PIP3. SIRT1 can also deacetylate and thus activate Akt and the Akt/GSK3 signaling pathway. HDAC3 binds to Akt and deacetylates it at lysine 20, promoting protein phosphorylation. Sirtuin1 (SIRT1) and Sirtuin2 (SIRT2) are involved in the deacetylation of Akt at lysines 14 and 20, which leads to the activation of the enzyme.

E2F1 transcription factor is one of the key players in determining the fate of the cell. It controls the expression of various genes that regulate DNA synthesis and repair, the cell cycle, and apoptosis [15][16]. E2F1 stimulates apoptosis when the cell cycle is disrupted or suppressed, which is typical of neurons [17]. Its synthesis is controlled by the p38 MAP kinase and the c-Myc transcription factor [18]. E2F1 induces the expression of various proapoptotic proteins, such as caspases 3, 7, 8, and 9, Smac/DIABLO, Apaf-1, Bcl-2, p53, and p73 [17][19]. Overexpression of E2F1, p53, c-Myc, p38, Smac/DIABLO, Bcl-x, caspases 3, 6, and 7 was observed in the penumbra on the first day after PTS [8]. This is consistent with data on the increased expression of E2F1 [20] and p53 [21] in the penumbra after MCAO and in the axotomized spinal ganglia of rats [22]. Inhibition of the E2F1/p53 pathway prevents neuronal apoptosis [19].

iHDACs have been shown to affect E2F1 activity [23]. In cancer cells, in response to genotoxic stress caused by doxorubicin, E2F1 is acetylated by PCAF at three lysines (K117, 120, and 125). This stabilizes the protein and increases its specific binding to DNA [24][25]. Acetylation of these lysines induces the accumulation of ubiquitinated but stable E2F1 [26]. Acetylation of E2F1 promotes the recruitment of chromatin-modifying enzymes and DNA double-strand break repair factors [27].

HDAC1 acts as a deacetylase in different types of cancer cells [24][28][29]. In retinal epithelial cells, E2F1 is deacetylated by Sirt1, which contributes to the resistance of cells to oxidative stress caused by H2O2 [30]. Thus, acetylation/deacetylation of E2F1 can contribute to the resistance of different types of cells to damage. However, in the literature available to us, we failed to find information on the acetylation/deacetylation of E2F1 in brain cells, either in normal conditions or in pathology.